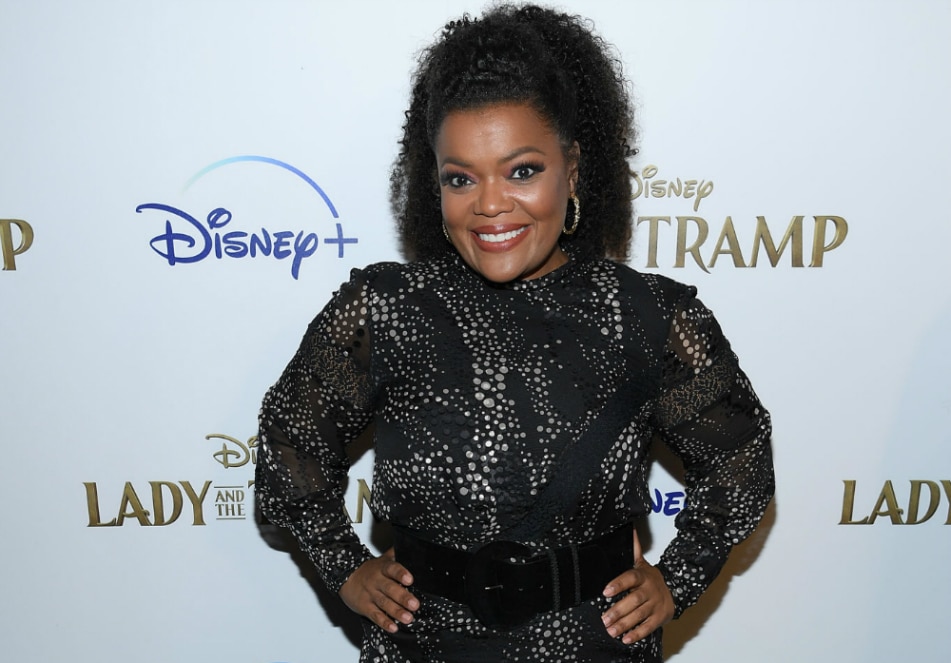 There are kind, lovely people, and then there are special people on a whole other level like Yvette Nicole Brown. In the brief time that I was in her presence, she managed to get a fellow person in the industry to overcome her fear of dogs (Disney had brought in dogs up for adoption to the room adjacent to the press junket waiting room), brought a smile to literally everyone’s face (a feat very difficult to do when you’re dealing with cranky press at the end of a rainy day), and was just the most positive, warm person that I’ve encountered in a very, very long time. Brown was in Toronto to chat about her new Disney+ film, Lady and the Tramp, and the following is a condensed and edited version of our junket interview.

Brief Take: Hi, it’s so lovely to meet you! So they say that you shouldn’t work with animals and kids, and here you are working with both on this movie.

YNB: That’s what they say! And there were three triplets on set all day for little Lulu.

BT: And you have The Big Fib coming up opposite kids.

YNB: I think that’s a fib that they tell. I’ve had the absolute best time working with kids and animals, and I want to keep doing it forever.

BT: And I want to hear the whole story of how you brought Mr. Harley Brown into your life.

YNB: Yesss! Mr. Harley Brown is one of Lady Rose, who plays Lady, it’s one of her doubles, she had four doubles. All the dogs were rescues in the film, so by the end of the film, the goal – Disney’s goal and our production team – was that they would all be adopted. So when we all came on board, crew member or cast member, those of us who wanted to adopt or were interested, we told one of the trainers. So I told Matilda: “I’d love a dog when this is all over”, and the last week of work she came up to me and she said “I have your dog”, and I was like “Well Matilda, I thought I could go and pick one”, and she said “No, no, I’ve been watching you and Harley is your dog.” And she was right. Harley fits my temperament and she watched me and knew.

This is one of my first pics with my mommy ever! This was on the set of @ladyandthetramp. She was technically still “deciding” if she wanted to adopt me but that smile says she already knew that my forever home would be with her. I so glad she played #AuntSarah! Otherwise we never would’ve met! 🐶❤️ Oh and Mommy wanted me to remind you that #LadyAndTheTramp debuts on @disneyplus as soon as it launches on #NovemberTwelfth! 💙

BT: And when did you know that Harley was perfect for you?

YNB: I just felt it. People say that when you go to the pound to get a dog, they’re all cute, they’re all rambunctious and wonderful, but you know the one that needs you, and it’s also the one that you need. You have that instant connection – they come to you and you hold them, and you just know. So yeah, I just knew.

BT: Now there are some humans in this movie too.

BT: Tell me about working with Kiersey Clemons and Thomas Mann.

YNB: Oh my god, those were my partners! Most of my scenes are with Kiersey and Thomas. Brig(ham Taylor), our producer, and Charlie (Bean), our director, they brought us all down in advance of filming so that we could have time together. We had dinner a few times, Kiersey and I went shopping together in Savannah, Georgia, so that we could build a bond together and so that on set it didn’t have to be “Nice to meet you, now I have to be horrible to you” or “You’re my niece now”. We felt like the Three Musketeers; I spent most of my time on set with them and it was a wonderful experience.

BT: Let’s talk about all of your other Disney+ projects.

YNB: The Big Fib is this great game show for kids where a kid asks two experts, one is an expert and one is a fibber, questions about their career or what they say they’re an expert in, and then the kid has to decide who’s the fibber. What I love about it is the kid is in the driver’s seat – the kid is sitting in a plush red throne, while I’m standing there literally leaning on a table, I don’t sit the entire thirty minutes of the show and the kid is relaxing in luxury, which I think is great. Also it’s an opportunity for even adults to learn things about astronomy or basketball or sharks, we learn so much about so many things. We shot thirty episodes in three weeks and it should be on Disney+ at the start of the year. And then I have one other show, a David E. Kelley dramedy starring John Stamos, who’s amazing, called Big Shot, and he plays a basketball coach at an elite girls school and I play the Dean of that school. It’s going to be a great show.

#AndSoItBegins! Meet #MarvynKorn and #SherilynThomas of #BigShot! 🏀 First shot is real life. Second is character realness. #BlueSteel anyone?! Blessed is any soul who gets to play everyday with @JohnStamos! He is one of the good guys, truly! AND first week in the can and no #Fraturday in sight! #LookAtGod! Thank you @davidekelleyproductions @deanlorey @billdelia @bradgarrett and @disneyplus for this awesome opportunity! Face & 📸 : @makeupbykweli Hair 👑: @porshawnanicole

BT: You really do it all. You act, sing, executive produce, and you wrote a film twenty years ago that aired recently.

YNB: I did! It’s called Always A Bridesmaid and I did not think it would ever see the light of day, and in September it aired on BET. I executive produced it and I worked with a great director named Trey Haley and we created a beautiful film. BET, I can’t believe it.

BT: Would you want to return to screenwriting?

YNB: You know, I loved it. I kinda loved being in control. When I watched the film and I watched the actors in it, I thought “I created people. I really created a world. None of these people existed until I put them on paper” and that was such a humbling experience. I’d love to try it again.

BT: Is there someone that you’d love to work with again?

YNB: Ooh, you know I’d love to work with Tri Destined Studios again. They’re a small production company and their goal is to create African American films where black people win. A lot of the time in films, we’re the downtrodden or the helpers, and in their films we get to be the heroes and we get to be the stars or the ones that fall in love and get the girl or get the guy. So I would love to work with them again.

BT: I loved seeing the footage from the Community reunion recently.

YNB: Yes! Just last week we all got together for Vulture magazine at Vulturefest. We reminisced and joked and laughed and had a great steak dinner after, courtesy of Joel McHale or Ken Jeong, one of the rich people picked up the tab. It was wonderful and a great experience.

My lovelies. @alisonbrie ❤️ and @gillianjacobs ❤️ @communitytv #TenYears #Annie #Britta #AnnieeeeAndBrittaaaaaaa! FUN FACT: we are all exactly the same height. Only heel choice makes it not look so. Yep, just three peewees out in the world making our way! 😊

BT: Do you have a favourite Disney movie?

YNB: Well I have to go with Disney’s Lady and the Tramp. It’s my favourite! Second favourite is The Princess and the Frog.

BT: Thank you so much for taking the time to speak with me.

YNB: Thank you! Thank you for asking about Always A Bridesmaid.

Lady and the Tramp is now streaming on Disney+