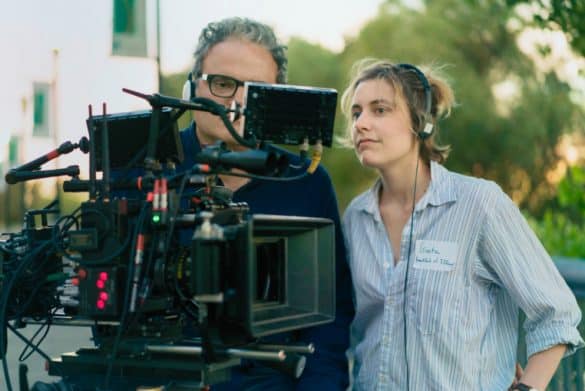 Everybody’s favourite mumblecore-turned-mainstream film actress, Greta Gerwig, has written and directed what’s soon to be everybody’s favourite film of 2017, Lady Bird. The coming of age movie is already highly touted as this year’s Oscar frontrunner for best original screenplay and best supporting actress (for Laurie Metcalf’s revelatory performance as the titular character’s overworked mother), not to mention many pushing Gerwig for a best directing nod as well. Though she had already previously co-directed and co-written the 2008 feature Nights and Weekends, in Lady Bird  she singlehandedly shows filmgoers what she’s capable of. Also starring Saoirse Ronan, 2017 breakout star Timothée Chalamet, Beanie Feldstein, Lucas Hedges and Tracy Letts, the film is at once a touching yet heartachingly familiar story of growing up, female friendship and Gerwig’s own love letter to her hometown, Sacramento.

Recently we had the opportunity to sit down alongside a select group of local journalists as we got to chat with writer/director Greta Gerwig about her beautiful film. The following were the conversation highlights.

Firstly, where did the name Lady Bird come from, in terms of the nickname aspect of it in the film?

Greta Gerwig: You know, it’s not from me. I never made anyone call me by a different name. I actually don’t know anyone who made people call them by a different name. But I’d been working on the script and I had all these different scenes but I felt like I had a block. So I put everything aside and put at the top of the page “Why won’t you call me Lady Bird? You promised that you would”. And I don’t know where that came from but I want to know who this character is. Who is this girl who makes people call her by a name that she doesn’t have. And I think in retrospect, I think there’s a sort of double thing going on with calling yourself by another name. It could be religious, if you pick a saint name for yourself, you’re choosing what you aspire to be. It could also be secular, if you want to be a rock star, you could be David Bowie. That’s not his real name. So it’s growing into this bigness. And then also it kind of means you have a crazy amount of confidence but also that you don’t think you’re good enough as yourself. I think that those two things are interesting side by side. But the name of Lady Bird? Goodness knows. I think it’s from Mother Goose. *reciting* Lady bird, lady bird, fly away home.

As a musical theatre nerd, I loved all the Stephen Sondheim songs in the film. All of the songs sung for the high school theatre auditions are Sondheim songs from a variety of his musicals and then the kids performed Merrily We Roll Along as their first theatre production. Can you speak a little about why you chose those songs in particular for your film?

GG: I mean I love Sondheim! He’s my favourite lyricist and Merrily is my favourite of his musicals. I’d written Merrily into the script and I had no idea I was going to get permission. Luckily my producer is a big Broadway producer and had worked with him. So he got him a letter and Sondheim said yes. In terms of choosing the songs that the characters sing for the audition, I mean ‘Being Alive’ [from Company] is such a beautiful song. And then having a teenager sing it, it just seems like it’s too much to act when you’re a seventeen year old boy. Lady Bird sings ‘Everybody Says Don’t’ [from Anyone Can Whistle] and it’s just reflective of where she was at that moment. Saoirse was also just so funny singing it. She was listening to a recording of Barbra Streisand singing it a bunch, so she was a little bit imitating the Barbra recording. And then Danny with ‘Giants in the Sky’ [from Into the Woods], it’s just such a beautiful, big, romantic song. The musical Merrily We Roll Along I felt had a central ache to it. There’s a heartbreak in the middle of it that I felt like my movie had the same quality of being – heartbreaking.

Can you talk a little about crafting this beautiful coming of age story and the characters within it?

GG: In a funny way the characters on the page became their own characters. They’re not people I knew. They’re pieces of people I knew combined with other things and then some things were made up. They say acting is listening but, for me, I think that writing is also listening because you’re paying attention to what characters are saying that they are. By the time that I had a completed script, each character is really their own person. For me, part of my process as a director is that the most important thing is giving the little lit match of the candle of the script to the actor, and saying this is yours now. I don’t own it. I don’t know who this person is. I can’t know what you know about this person. And I feel like it’s this passing on of the characters that’s vital to me.

There were a lot of films that I looked at when creating this story but I found that most coming of age stories are about a guy, and it’s usually about one guy. I mean it’s always about one guy. It could be a reward at the end of the journey or it could be the goal the entire time. But I felt like most coming of age stories that are about a person, that person was usually a boy. The movies that I really loved like The 400 Blows or Amarcord were about guys. I mean even more recently with Boyhood, it’s about a boy. And I felt like a young woman’s personhood is just as interesting. So, in a way, I started out with this idea of I want there to be a story but instead of one guy, I want there to be two guys, and I want them both to be wrong. And I want the core of the love story to really be between her and her mother. And I think that that is something I was very deliberate about because I think too often female characters are reduced to their relationship with the guy. Not that there’s anything wrong with guys. *laughs*