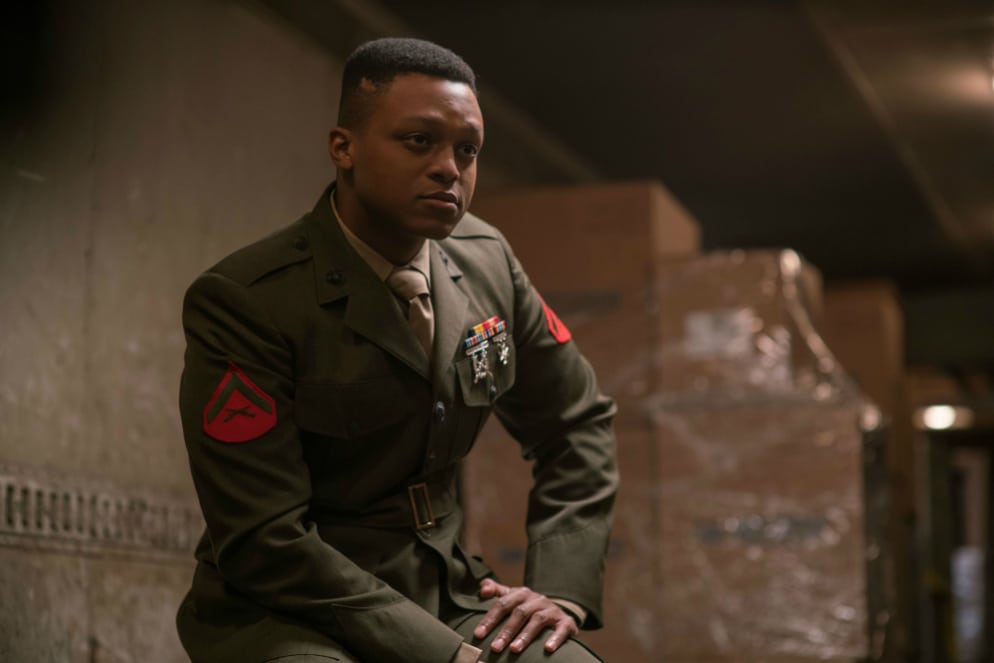 J. Quinton Johnson is instantly likeable both onscreen and off. The actor/singer/composer made hearts go aflutter as Sarah Hyland’s love interest in ABC’s Dirty Dancing re-make, and last year he went from being a Hamilton superfan to starring as Hercules Mulligan/James Madison in the Broadway production, winning both critical raves and audience members’ hearts. Now he’s giving viewers a peek at his dramatic acting capabilities, more than holding his own starring opposite acting powerhouses Bryan Cranston, Laurence Fishburne and Steve Carell in Richard Linklater’s acclaimed film, Last Flag Flying.

We had the opportunity to chat with the multi hyphenate on the phone recently and the following is a condensed version of that delightful conversation.

J. Quinton Johnson: *laughs* I mean Rick is such a giving director. He lets his actors take ownership over their roles and how the moments are crafted, and I loved working in that capacity. I really appreciated that and I really admire his work.

BT: I read that you filmed the scene where Steve’s character learns of the circumstances surrounding his son’s death from an account by your character on Veteran’s Day. What was that experience like?

JQJ: Yeah, that was a really harrowing scene. To be filming that scene on Veteran’s Day last year was powerful on so many levels. As an actor you hope that you can bring truth to a moment that is real to a lot of people.

BT: In this film you’re performing alongside some acting heavyweights -Bryan Cranston, Laurence Fishburne and Steve Carell. One extended scene – the train sequence where their three characters and yourself are sitting around telling war stories – really stood out for me. Was there ever a time on set where they were regaling you with some of the stories from their careers or when you approached them asking about specific points in their careers?

JQJ: Well I knew all three of the guys as a consumer before I ever knew I was going to be an actor. So that was a really interesting relationship to have with them coming into this project. With Laurence, the thing that I knew him most from was the movie Higher Learning, which my Mom and I used to watch all the time when I was younger. That was one of my favourite movies of his, so on the first day of rehearsal, it was break time and he came outside and sat down next to me. At that point I was still trying to get over my nerves working with him. I was getting ready to have my last Hamilton audition and I was reading my sides, or pretending to,  and I said to him, “Hey man, I don’t want to bother you but Higher Learning is one of my favourite films of all time”, and he said, “Thank you so much, man!”, and then we sat there talking about the movie for a long time. With Bryan, I was reading his memoir [A Life in Parts] while we were filming. So I was going home and reading his memoir, where he talks about so many different things, like his first job, commercials, and he talks a lot about Breaking Bad. So I would go and read chapters and the next day, when I would work with him, I’d come to set and try to ask him casually about what I had read. Every time I had questions he would be so open to discussing anything I wanted. With Steve, there was a moment when we were outside filming the flag ceremony and Rick wanted clouds because he wanted the aesthetic to be cloudy, which is why he shot it in that time of year in Pittsburgh. So I was standing opposite Steve’s shoulder, but they weren’t getting as many clouds as they wanted, and we were surrounded by extras on set that day too. So I leaned in close to him and said, “Would it be too much to ask for a little precipitation?”, from Evan Almighty, and the extras had all seen that movie, and Steve immediately broke out in laughter. It was such a heavy scene and Steve knew we needed some comedic relief. There were definitely a lot of moments where, if I could throw out a quote from The Office or Breaking Bad or The Matrix or even Black-ish, I would just go for it. But they were so gracious and great guys to work with.

BT: Did you ever break out into songs from Hamilton, like you did on the Everybody Wants Some!! set?

JQJ: Oh yeah. By a certain point in filming I knew I was going to be in the Broadway production. I flew to New York to learn the show and then flew back to do Last Flag Flying. When I came back to set I had to rehearse and learn the choreography and staging for Hamilton. So when I was in my trailer I would have to play the music and sing it full out so that I could learn it. But Laurence had his trailer right next to mine and one time he walked out of his trailer, looked at me and said, “Sounding good, man”. I didn’t think he could hear me!

BT: You worked for a brief time with Jordan Fisher in Hamilton. You must be so proud of how far he’s come on Dancing with the Stars.

JQJ: I am! I’m following his progress a lot on social media. We worked together for such a short amount of time on Hamilton but, and not many people know this, John Laurens and Hercules Mulligan have the same dressing room in the Broadway production. So you form a bond with that person that’s just unlike the bond you have before production. There were a lot of things that we talked about during that time, either before he left the dressing room or after the shows, and I’m proud to see his successes now. He’s an incredibly hard-working dude and I know he’ll continue to work on his music and his numerous appearances, like the recent tree lighting ceremony in L.A.. Nobody deserves success more than him.