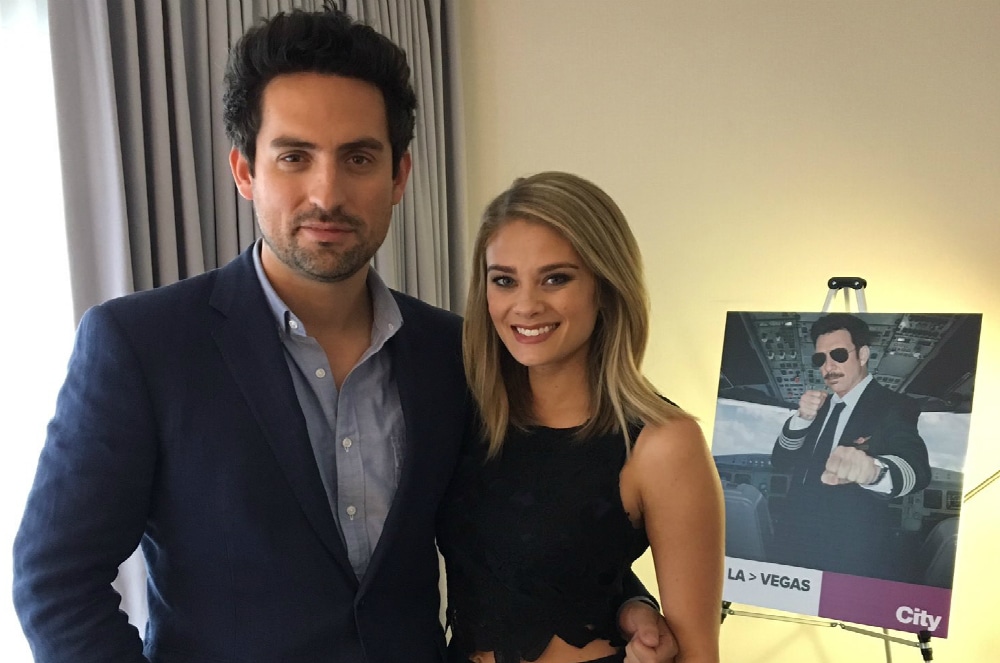 The chance to chat with comedic actors Kim Matula (UnREAL) and Ed Weeks (The Mindy Project) at the recent Rogers Upfront was especially delightful because we had been informed ahead of time of their rapid fire rapport. Pairing the two LA>Vegas leads was a wonderful idea because everything we asked was parried and spun and returned. It was more like fencing and tennis than it was interviewing (albeit with a lot more laughs).

The following is a condensed version of our sit-down with Matula and Weeks in advance of the premiere of their show LA>Vegas, airing on Rogers and City this coming year.

Brief Take: Welcome to Toronto! In the spirit of the show, did you fly over?

KM: It was tiring.

Brief Take: It was an intense trip

EW: She was two years old when she left. It was the journey of a lifetime.

Brief Take: What did you learn about flying by being on this show?

KM: I’m such a creep now. I didn’t realize I would be, but I’m such a creep, because I watched the flight attendant so awkwardly, and I watch how they’re behaving in the galley. Then I will accidentally make eye contact with one of them and then have to look away like I am not looking.

Brief Take: But you don’t want to jump in, do you?

EW: Of course you could and they would probably like that.

KM: They would. Maybe I will try it next time.

Brief Take: What did you learn about each other while making and promoting the show?

EW: Ummm, everything! How to love!

KM: I learned to act from him, I didn’t know before and I learned from him. I think that we’re lucky that this just works.

KM: We both have a dumb sense of humor.

Brief Take: Do you bring some UnREAL tips with you?

Brief Take: Ed, are you going to stay on The Mindy Project?

EW: Yeah, well we only have one more season left.

Brief Take: And it’s on the same network in Canada – City.

EW: Same network, and we’re lucky it doesn’t overlap in terms of shooting schedules. We shot The Mindy Project July to September and this started shooting in September, so it’s great. And Mindy Kaling was very very gracious in allowing me to do both, so it’s a very smooth takeoff, so to speak.

Brief Take: What was the number one thing you learned from Mindy?

EW: Oh, wow. I really think to relax and just allow yourself to take swings and don’t beat yourself up for so-called “mistakes”. And she will play and each take will be different and will throw new ideas out. Of course it was my first big job, especially as a series regular – I’d never done that before. So initially I was concerned with every take in my head. I would have this definitive idea of how I would perform that take and I would beat myself up if I felt like I wasn’t achieving it. And then of course what you end up with is a lifeless performance. But of course it’s something you shouldn’t be thinking about, you should be in the moment.

EW: You’re not engaging with your scene partner because you’re not being your character, you’re being Ed Weeks, trying to make a good impression and not get fired. So just observing her, and her super-talented cast, and Ike Barinholtz as well. He’s such a huge inspiration, because he just does whatever and it’s just genius.

EW: He just lets it all hang out. He’s not afraid to be vulnerable and silly. It’s just wonderful to watch, you can actually be like “it’s fun”, and once it becomes fun, the more relaxed you are and the better it is, you don’t need to beat yourself up, perhaps that’s like a British thing. It’s like pain equals value, in a way. It’s slightly outdated.

Brief Take: What is the atmosphere like on the set of LA>Vegas?

KM: *laughs harder* It’s really fun, and really relaxed. Between takes, when they’re setting up cameras, they have music on the set and it’s great. We have the freedom to talk to our writers and our director, and play and ask questions and figure out how we’re going to do the scene.

EW: It’s also so great how the crew is pretty much the Modern Family crew. They were all so comfortable with each other, they would play music and joke around. You can only be creative if you’re relaxed and it was super relaxed there.

Brief Take: How about producers Will Ferrell and Adam McKay?

KM: We have not met them. Yet. I’m going to put the Yet out into the universe.

EW: Dylan McDermott plays that part (of the captain) so perfectly. He just embodies that just sweet Lothario.

KM: When I was reading this character on the page, I couldn’t figure out how exactly who he was, or how he was going to be played, but when I saw Dylan step into the part, something clicked and then all of a sudden this gold light was around. It was perfect and was exactly who it should be.

EW: Everything he said was just said low and in this very sonorous grumble.

EW: I just cracked up. It was poignancy and hilarity. He’s a great captain for the show.

EW: He’s been around for so many years. He’s been so brilliant in so many things. He’s actually been a very calming influence. I remember, we did the table read, we were all so cautiously optimistic.

KM: It was an intimidating room.

EW: We were reading for all of these executives, it was the first time any of us had ever really met or heard it read out loud.

KM: And in the back of my mind, I am like, “I can still get fired in the table read”, and that’s a thing.