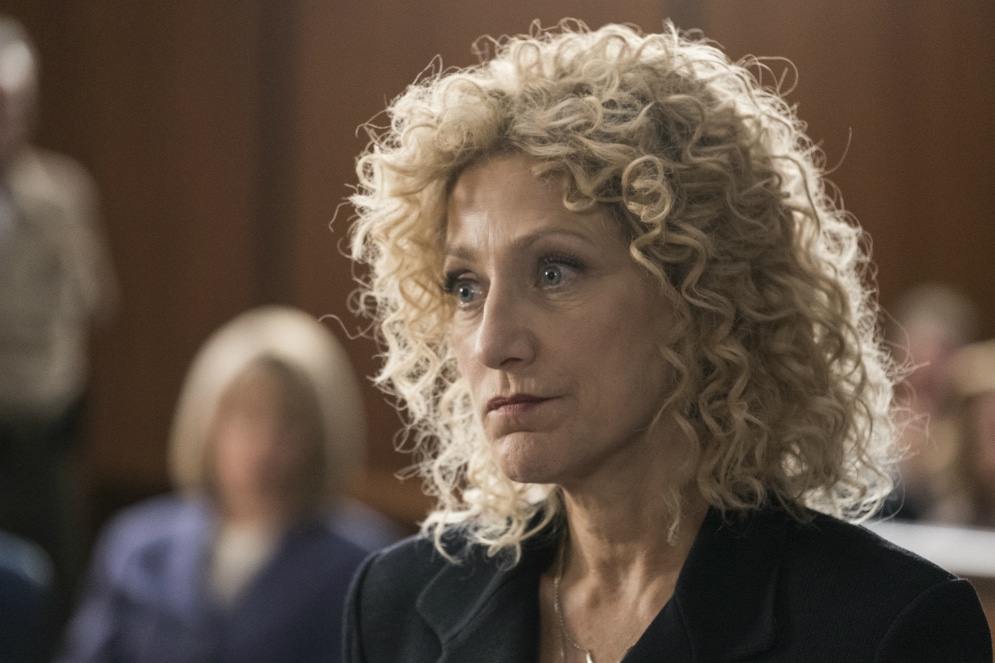 True crime stories are having a moment in the cultural zeitgeist. There’s Serial, S-Town, American Crime Story, Mindhunter (among others), and, for the past 6 weeks, Law & Order True Crime has been shocking viewers with the truth behind the Menendez brothers’ murder of their parents in the summer of 1989.

We had the special opportunity to speak on the phone with the show’s star, Emmy award-winner Edie Falco (The Sopranos, Landline, Nurse Jackie, Oz), who portrays the brothers’ attorney Leslie Abramson. The following is a condensed and edited version of that lovely conversation.

Brief Take: You had mentioned in a previous interview that you choose projects based on scripts that stay with you the following day after you’ve read them. What about this particular project stuck with you?

Edie Falco: The details of the story were particularly upsetting to me, especially the details concerning the family and how abused the boys were. I really started to care about what they went through and the injustices that it caused.

BT: What did you like best about Leslie and playing her on the show?

EF: Her passion. I really admire how passionate she was about her cases, this one in particular, and how fierce she is.

BT: You’ve played some very iconic characters on screen but this is the first time you’re playing a real-life person. Has the reaction been different in the industry and from your fans towards your work on this character?

EF: I don’t know, honestly. I haven’t got much reaction yet because we’re not completely through the airing yet. I have mostly worked in cable television and I’m working on a network now and a LOT of people watch network shows! It’s funny, after all these years of working in television, I have more people coming up to me about this show than anything else I’ve done. I’ve been so surprised.

BT: You, of course, had worked on Law & Order earlier in your career and now you’re returning to the property in its first True Crime iteration. What does Law and Order mean to you?

EF: Well it’s a mainstay in American television, I don’t know about other countries. There are so many shows that are part of that family, and, as an actor, many of my actor friends have worked on it. So it’s just part of the history of working in television and being an actor in New York. It’s a big part of an actor’s life in New York. Any actor, myself included.

BT: What have you learned about the industry since you’ve last worked on Law & Order that you wish you knew then?

EF: Oh gosh, everything! It was 25 years ago. I think I enjoy all of it much more now because I feel less desperate. Back in the day I was working nights and then auditioning during the days, barely getting by. And I have a comfortable life now and I do what I do because I enjoy it. I enjoy it more than most people enjoy their jobs. So it’s been a million years but I’ve gotten better at what I do. I don’t necessarily mean the acting part, but the nuts and bolts of being on a set and making a tv show and the etiquette of it all. It’s one of the greatest joys of my life getting to work on television and film. Every year I’ve just felt better.

BT: With the popularity of your show, American Crime Story and Mindhunter, there’s a renewed fascination on television with killers and the motivation as well as the history behind their crimes. Why do you think there’s a sudden re-interest in these stories now?

EF: I can’t say I know for sure. I really don’t think there’s ever been a dearth of crime shows on television. The idea going back to old crimes, though, might just be how much we know more of the abuse systems and what the abuse turned people into. I mean it seems so mysterious – how can someone kill? But then you see the nuts and bolts of what these kids grew up with and you’re like, oh, I understand now. These murderers were created from two adorable young boys. And there’s something about wanting to understand what makes someone feel like murdering someone else is okay. It’s too scary to think that it just happens, you know? So people want to understand.

BT: As an animal lover myself, I was interested in your work with PETA. How did you get involved with working with them and what motivated you in that decision?

EF: That’s a hard one to talk just a little bit about. PETA, the Humane Society, shelters in my area, animal sanctuaries – for whatever reason it’s where my heart is drawn to. I do believe that if we could really respond to treating animals kindly as a species, then we could cure all ills. I really think it all starts there. We can’t treat animals like they’re not living things. If you treat them like they’re a member of your family, then I really think the whole alchemy of the world would change, frankly.