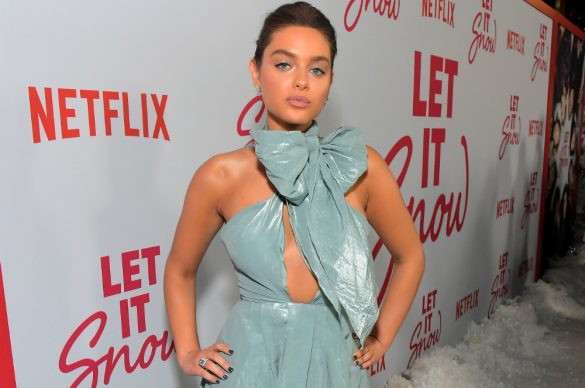 Keeping with the annual Brief Take tradition of finding the best Netflix holiday movies and then interviewing a lead actress (starting with Kat Graham for The Holiday Calendar), I was overjoyed to speak with standout performer Odeya Rush.

Rush is mesmerizing in the star-studded Let it Snow, an adaptation of a multi-author YA book, from first-time feature director Luke Snellin. The story involves a snowstorm on Christmas Eve that bringw together a number of residents. As Rush shared exclusively with Brief Take, she channeled the discomfort of the chilly weather in Toronto into easing into her character, as cunning a strategy as I have heard, and perhaps a new form of method acting. Odeya Rush was genuinely warm and kind in our phone interview, which took place on the movie’s junket day in Los Angeles.

The following is a condensed and edited version of our conversation with actress, Starlight ambassador, and budding director Odeya Rush of Let it Snow.

Brief Take: You’re so transformative as Addie in Let It Snow! I don’t think we’ve ever seen you play a character like her before.

Odeya Rush: Well it’s something that I’m very proud of. It’s a character that I’ve never done before and it’s a character that is totally different from me. The character…I realized yesterday, I was thinking about it,  when I was acting out every scene that I did, I was almost on the verge of a breakdown. [laughs] It was tough, you know? It was tough to every day play angry and sad – they are very exhausting emotions, especially angry. I’m really proud of the way that Luke and the editor put it together. We didn’t overdo it, we didn’t underdo it, and I was very proud of it.

BT: Did you look first to the book as research for encapsulating all the nuances of Addie?

OR: No, I didn’t use the book as a point of reference. I love John Green, but I stuck to the script as my Bible, or, as my Torah, for all the Jews out there. [laughs] But yeah, I think it’s needed. This sort of love story is needed in which everybody feels represented. We need more queer characters and we need to celebrate diversity. I know that there will be many more like this for people growing up, who watch these movies and feel represented. 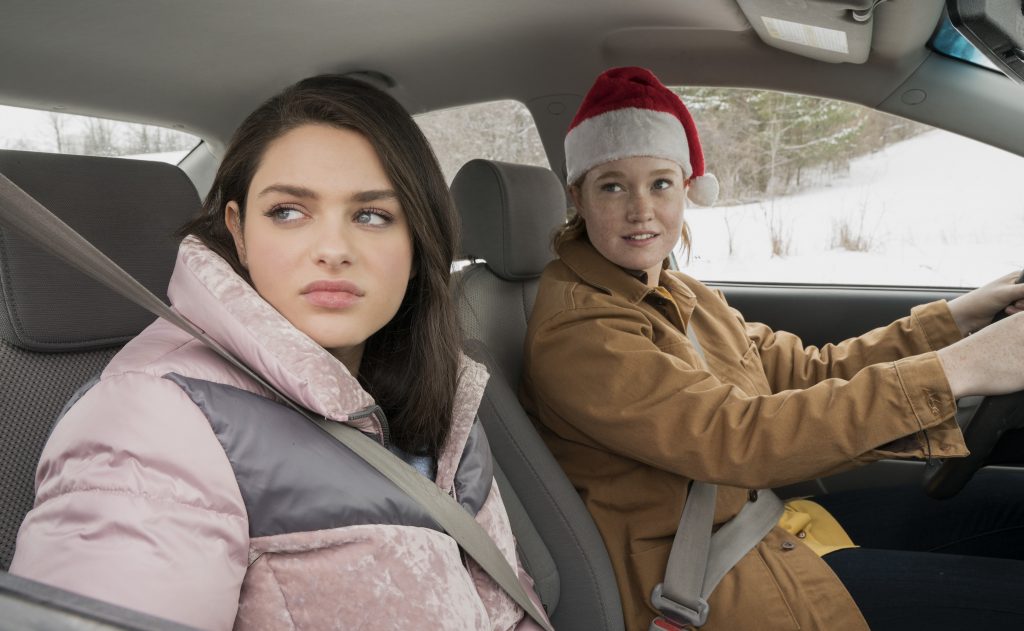 BT: What an incredible ensemble too. Had you worked with anyone in the cast before?

OR: I knew of pretty much everyone, I was a big fan of everyone, and I didn’t even work with anyone in particular that much, besides Liv (Hewson). It was cool, I got to spend a little bit of time with everyone, mainly the last week, and it was a really cool moment after we had already read about everybody’s characters in the script. Sometimes I would mention a different character, but I hadn’t even met the person or seen what he or she was like in his or her performance. That moment when we all met each other, it was cool. We saw everyone’s characters, we got a glimpse of everyone’s storyline a little bit. I got to see everybody’s personality. That was a cool day, for sure.

BT: You and Liv have an incredible character dynamic. It was very believable that your characters had been friends since you were both 12 years old. How did you go about building that dynamic?

OR: I met Liv and the next day, we were yelling at each other in the car. [chuckles] I’m glad that I had an actor like Liv. I remember the first time that I heard them speak, I was like: “Damn, okay. They’re really good!” [laughs] I’m glad that I worked with someone this talented. And it worked, too. We kind of complete each other a little bit in our real lives as well. We’re pretty different from each other and we’re a little bit shy at first, and as we kept working together, we warmed up to each other more and more. The last scene that we shot was the scene that showed our friendship the most, it worked out perfectly. By the time I was telling them: “You’re an amazing friend! baa baa. I forget the speech, baa baa”, I really felt it. Because I had spent enough time with them and I really had a good connection with them. 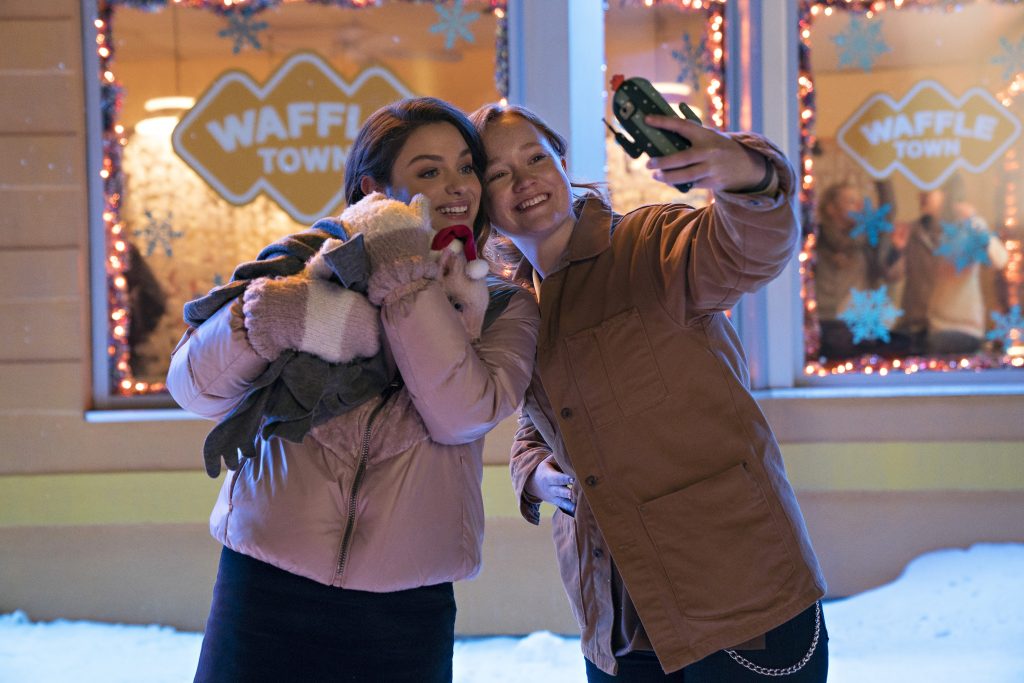 BT: You’ve talked about how each time on set is magical. Did you experience that same magic for Let it Snow?

OR: It was so different from anything that I ever done before because it was the first movie that I was in which I was flying in and out. I would do my bit, not see anyone else, come back, do a little bit more of my bit, not see anyone else, and until the last week, it didn’t feel like a regular movie to me, it felt like they were doing five different films. Then watching it, it was the first movie that I’d seen come together and I was like: “I had actually no idea what to expect!” Because there’s such a large portion of the movie which I didn’t know about and I’m not in it and for which I wasn’t there. It was really cool to see it all come together and to see how everyone is really talented. It was definitely a different type of experience.

BT: Toronto is where I’m from. It’s an amazing city, but it looked pretty cold in the movie. Was it movie magic?

OR: It was colder than you think. The first day that I filmed was the coldest day of the year. It was -30, it was really cold and I was in a skirt, as you saw. A skirt and tights. I’m from Israel, so, you know, I was shivering. Joan (Cusack) lives in Chicago. I would be shivering in the car with four blankets on me, shivering, not able to speak, and she was like: [chuckles] “Can I take off this jacket?” I’m used to humid heat, that’s where I’m comfortable, but because my character was constantly uncomfortable and angry and sad, it actually helped my performance – the discomfort I felt. Also the character goes on this journey which she is totally not prepared for. And of course it was annoying to wear a skirt and tights for the event in which I was acting [laughs], but it made sense for the character that she didn’t know that she was about to go on this journey, and every time she gets agitated, the clothes, the climate, everything helped make that stronger for me.

BT: When you arrived in America, you spoke only Hebrew, right? What was that immigration experience like for you?

OR: You know, I am extremely proud to be Israeli. I think that for many years, my Dad was like: “No, we’re not going to watch Israeli TV. You need to learn English.” All of my friends were American, I very much wanted to adapt to that culture, and I always spoke Hebrew at home, but now that I’m older, I don’t live at home anymore, I’m not speaking Hebrew every day with my family, I crave it much more. I try to go back to that and I try to go home as much as possible, now that my Dad lives there. I try to never lose that part of me because I know that in the beginning, when you come to a new country, you want to feel comfortable and feel normal, but now as I get older, all I want to do is get back to it. It’s fun finding that balance in my journey.

BT: In this film, Waffle Town is sort of the centre of everything. You lived in Alabama and are probably very familiar with Waffle House.

OR: I lived there for two years. We went to IHOP a lot growing up because I also lived in New Jersey. [laughs] But I did a movie once in the South and they had Waffle House catering and that was really good. I haven’t been to too many Waffle Houses.

BT: You also filmed Dumplin’ in the South. What was the experience like of having Anne Fletcher as your director?

OR: Anne was amazing. Really loving and caring and very encouraging. And yeah, she’s a big personality; she used to be a choreographer, she was quite open to collaboration, super motherly and nurturing.

BT: Have starring in these films inspired you in terms of your arc as a director?

OR: For sure! I think it also helps me that I’ve directed before. I don’t have to come up with suggestions that only have to do with my performance. Sometimes the kind of suggestions of: “What if I hold this and she goes over there”, more technical things I think, to ease it on the director. It was also really cool watching Luke (Snellin) for the first time. I’m familiar with that type of excitement, he was so excited to start this and looked at this with fresh, new eyes. When someone is that excited about their job, it makes you want to work even harder.

BT: How do you feel as a director, creating a path that may lead you to directing features?

OR: It feels amazing. I’ve always wanted to direct. I directed before I started acting – I directed my brothers in movies on iMovie and plays at home. It’s really incredible that I get to do it, and there’s going to be a feature soon! I really want to do it in the next few years after I’ve done a couple more shorts, a few more music videos, but I’m going to stick to that. I’m a very motivated, determined person, and if I say that something is going to happen in a few years, it’s going to happen.

BT: Do you have a concept or theme that you’d like to explore in that feature?

Let It Snow is now streaming on Netflix! To win a Let It Snow prize pack, click here