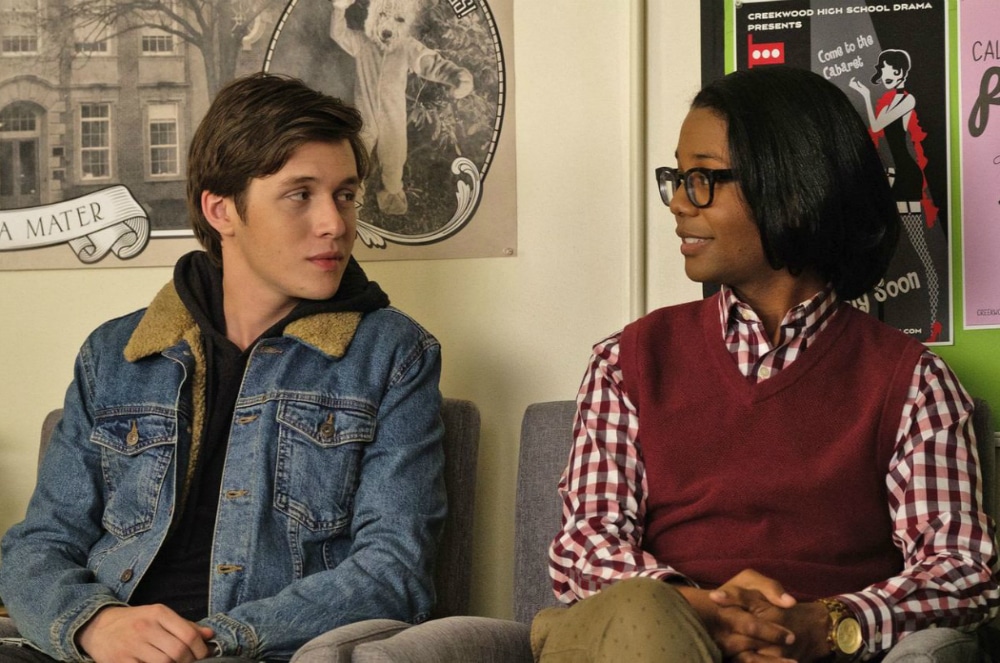 One of the standouts of the film Love, Simon, alongside Alexandra Shipp, Nick Robinson and 13 Reasons Why‘s Katherine Langford, is Clark Moore, who plays Ethan. Moore’s character is not in Becky Albertalli’s book, but as luck would have it, the feature filmed in Atlanta where the multi-talented star got to sleep in his childhood home, and Moore has since emerged as the breakout star from the film. The actor and singer now lives in L.A. and we spoke by phone recently about the diverse representation in the film.

Here is a condensed and edited version of our delightful interview.

Brief Take: Your character was created specifically for the film.

Clark Moore: *laughs* Yes. It’s exciting and a little bit overwhelming. It was also a little bit unnerving because the other actors had such rich source material, and I read the book myself so I knew the world and I knew the other characters, but I sort of had to in-home craft this with Greg [Berlanti] and with help from the writers, Isaac [Aptaker] and Elizabeth [Berger], all together on set. It was pretty wild.

I think that I show Simon, and through Simon, the viewer, that there is sort of a wide spectrum of gay experiences, and we’re not all the same, and we’re not all interested in the same things, and some of us may fit more the stereotype for gay people, for example, flamboyant young high schoolers, that type of vibe, I love that they took such a bold step with this character, to show that we have such a diversity of experiences.

BT: How do you feel now that the film is coming out so soon?

CM: Ooohh, I can’t even think about it! It’s been so far away for so long. We shot it a year ago, we shot it in March and April of last year, and then it was done. It was a 35 day shoot, and it was in and out, and my part was spread out over time, so I was jumping in for a couple of days here and then I was out. It didn’t feel real until yesterday when all the reviews came out and I read all of the really nice reviews of me, because I think that up until this point, the studio and Greg and everyone wanted to keep the special parts that are separate from the book or at least the promotional material a secret. Then all the reviews came out and everyone was so generous, and so kind, and did not have to mention me at all, so I’m just trying to process it.

BT: How was the filming experience?

CM: It was a magical experience. The whole thing felt like summer camp and that’s a testament to Nick [Robinson] and to Greg, who set such a calm tone from the beginning. They were just very grounded and centring forces. Nick being the number one, he sets the tone. One example is whenever you’re not in the shot, you have to be somewhere and they put out all these chairs and they put out the actor’s name or the character’s name, and that’s where you sit. From the first day, Nick made it clear that all chairs are equal. It wasn’t like he made an announcement or speech, it was just his body language that showed that we’re all in this together, we’re a team, and no one is better than anyone else. People would sit in his chair and they’d get up quickly and they’d be like, “I’m so sorry” and he’d be like “are you kidding? Stop!” Just like very chill. Sets aren’t always like that.

BT: Did you know people in the cast before hand?

CM: I was aware of most people to be honest, because that cast has done a lot of really cool stuff. Katherine [Langford], one of my best friends from childhood, Tommy Dorfman, is also in 13 Reasons Why, and so I met her on set, and I heard a lot about her through him, that was his first big project, and I so I met her and I was a huge fan of the concept of her work, but at time it hadn’t come out yet. 13 Reasons Why came out while we were in production, so it was kind of cool to meet her before everything exploded, and to now know her…I knew when she didn’t have an Instagram, and I know her now when she has eight million followers. *laughs* It’s kind of crazy. In that same vein, I was a fan of Miles Heizer as well and a fan of his on Parenthood.

I’ll watch anything that Greg Berlanti does. I watch Arrow, The Flash, Supergirl, Legends of Tomorrow, Riverdale, so I knew Greg. I watch a *lot* of TV. Greg Berlanti is arguably one of the most woke white people I’ve ever met. I’ll give you an example. We were in the makeup trailer, and Greg was getting ready to tell a hair person what he wanted for my character and before we started, or did anything, he looked me in the eye and asked me, “are you okay with me touching your hair?”. And I was floored because first of all, you’re my boss, you can do literally anything you need to, and second of all, the number of times white people have put their hands through my hair without asking and it’s pissed me off is crazy. Little things, they speak volumes. I’m used to being the only black person on set or in a room and this film could not be any more different or any more representational.

We shared a makeup artist with Black Panther, so some of our makeup artists were going back and forth between us, Stranger Things, Black Panther and Guardians of the Galaxy Vol. 2 as well. Speaking to Atlanta and all the crazy things that were filmed there – I’ve already seen Black Panther twice and I’m going again tomorrow.

BT: You’ve spoken before about wanting to get involved with charitable organizations. Which ones in particular would you like to work with?

CM: It’s funny, I had all these other plans but they’ve now changed because of Black Panther. Because of my gay ancestry, I’ve never felt a connection to the African continent until seeing that movie. Now I just want to go there and get my hands dirty and there’s so much LGBTQ work that needs to get done in so many African countries, so I’m just scratching the surface.

CM: If I could get a one-way ticket to Wakanda, I’d never come back! *laughs*