I was under strict embargo until the episode aired on CTV, but now I can finally (!!!) squeal with glee with the rest of you in talking about how DaisySousa were end game (of course they were!). If you haven’t seen the series finale of Marvel’s Agents of S.H.I.E.L.D. yet, I’m sorry for the reveal, but I just can’t keep it under wraps any longer! The finale delivered all the big moments the fans have been waiting seven seasons for, and then some. I had the opportunity to chat over Zoom video recently with Chloe Bennet (Daisy Johnson/Quake), Enver Gjokaj (Daniel Sousa) and Clark Gregg (Coulson) as they reminisced about filming the Marvel’s Agents of S.H.I.E.L.D. conclusion a year ago. The following is a condensed and edited version of our conversation.

Brief Take: What was your experience like filming that final group scene in the finale?

Chloe Bennet: It was rough! That was rough to shoot. It mirrored exactly what we were all going through as a cast, you know? So much of the show has mirrored…we didn’t know each other at all, we were this rag tag group of people shooting this Marvel world that’s never really been touched before and with very different, limited resources. We’ve just grown together on screen and off. To kind of end in that way where everyone moved forward. What was kind of dramatic about all of that was it was so real and sometimes that happens in life – people go in their own directions and you stay in touch and you maybe become more polite with people you once used to see every morning at five in the morning every single day for seven years, and things just change. The gravity of how real that felt for us as actors, or at least for me, it wasn’t hard. It wasn’t hard in the sense that I don’t think many of us were acting, it felt like that was the cast saying goodbye to each other. It was really special. To get that opportunity on a show, for the writers to even know and have the opportunity to write that while we’re all sitting there..and who knew we would have predicted Zoom?! It was basically just S.H.I.E.L.D. Zoom, full body Zoom, so that was cool. It was special.

I think, for Daisy, she was driving that narrative the most of “we can’t just say goodbye”. I don’t know how much we got there on screen, if that makes sense, and I think the goodbye was typical S.H.I.E.L.D. fashion which is like ‘it’s goodbye but it’s not’, ‘it’s goodbye but we’re all still going to talk’, so you see us talking. I think I have mixed emotions about how much we captured that, really. I think I can’t look at it without being a little biased in that I wanted a little bit more of a goodbye with each character on screen. We had a lot of time loop stuff to figure out. [laughs] But it definitely happened in real life so currently, for me, that’s blurring and making this a bit more difficult to answer. Certain things got on camera and certain things didn’t. 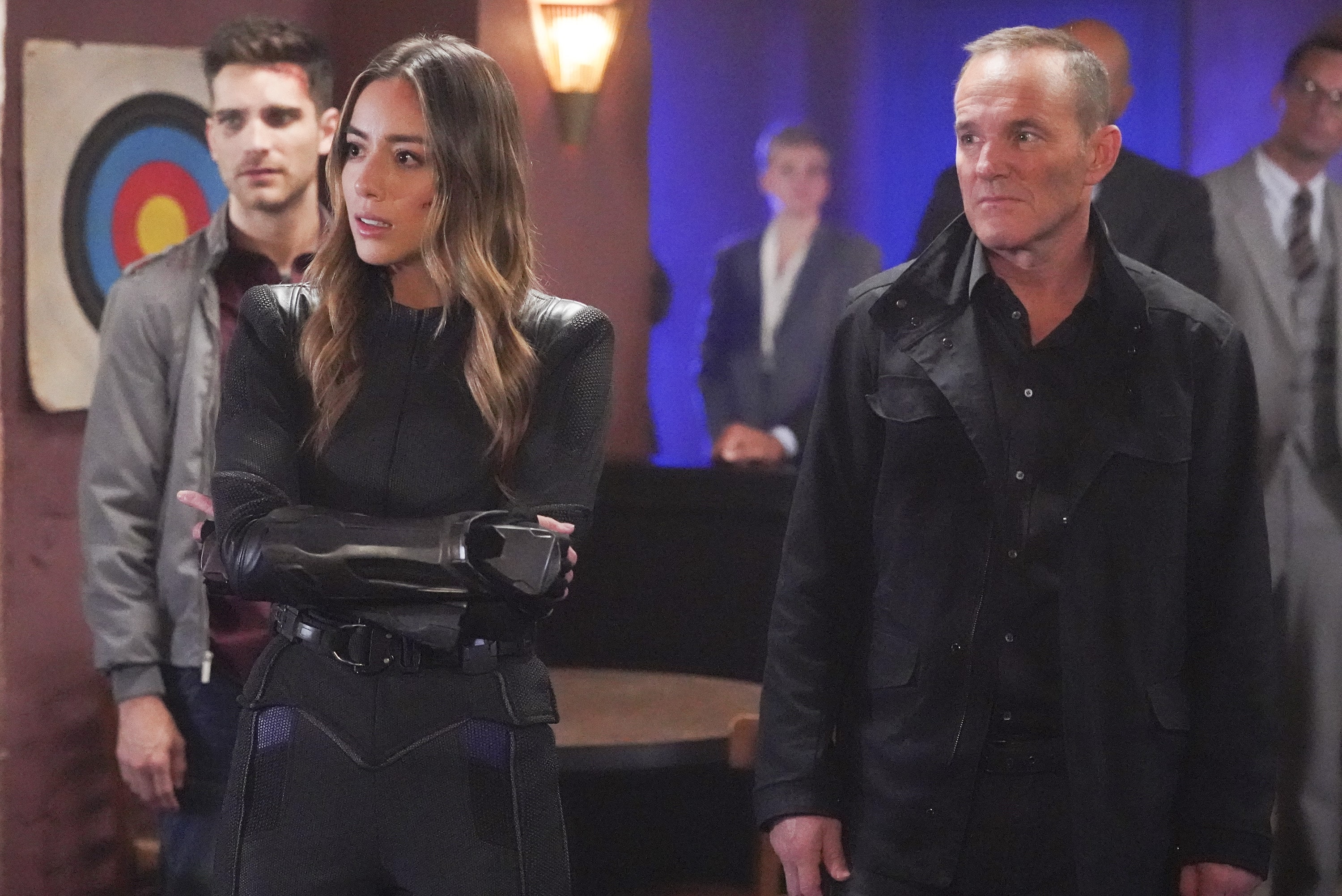 Enver, what was it like returning to playing Sousa after Agent Carter?

EG: No, it was a tremendous privilege. When you’re starting a show up, just the crew had been working together so long, the cast had been working together so long, I just had the privilege of walking onto such a well run ship. And also, being in the position of they let me explore a part of this character that never really got to be explored in Agent Carter and really play that out. I’m forever going to be tremendously grateful. It was an interesting perspective to be the outsider and watching, because I haven’t spent these seven seasons, but watching and witnessing, god it felt like being at some other family’s Christmas dinner or Thanksgiving dinner or at a wedding or something where I got to witness this thing that was tremendously deep for everybody involved and tremendously bittersweet. So it felt like I was a privileged witness to just kind of get to hang out and see all of that. I got to have it too, in a weird way, but I didn’t have to do all seven seasons for it. [laughs]

CB: You truly were the Sousa to my Daisy in terms of how calm you were on set. [laughs] It was an emotional run and a real fuckin’ high, if you can imagine. We were shooting our dicks off, sorry for the bad word, we were working such crazy hours and we’re fitting it all in with trying to process all of our emotions while…we ran fast and hard until the very end. We were shooting fights and it was to the wee hours of the night finishing the last fight on the last day. So I was very thankful to have Enver there as [to Enver] you were very calm. It was hard to focus because also on the last day of the last shoot, it was the Quake on Quake fight and there was a wrap party that started at like 7pm on set and I was still shooting until like 10pm. So in the middle of trying to finish the Quake fight, every person who’s ever been on our show were at video village like “hey!”, every guest star, every recurring role, they were all there. I was like “Oh my God, I have to get through this fight and then have 18 drinks” because it was pretty overwhelming. But thank God everyone was there.

EG: I have to mention that it was also very symbolic. They were tearing down the stages as we were working.

CG: Yeah, as we were shooting.

EG: We were on the lot, and whoever had bought it, the stage, you could hear the construction getting closer and closer over the course of the season. [laughs] I mean you really felt like any day they were just going to start tearing down our sets. It was so symbolic.

CB: And we had to be out at that specific time. It couldn’t have been more ‘stakes are high, we have to get this done’, the stage gets torn down tomorrow. Everyone from every episode that has ever been on is here drinking on the stage next door. It was just crazy. I still have not processed that night of wrapping. I think I got there are 5am that morning and I think I left at 4:25 in the morning the next day, yeah. Let’s close it down, let’s party. [laughs] I got so drunk. Me, Jeff, and Elizabeth were there until 4:30. 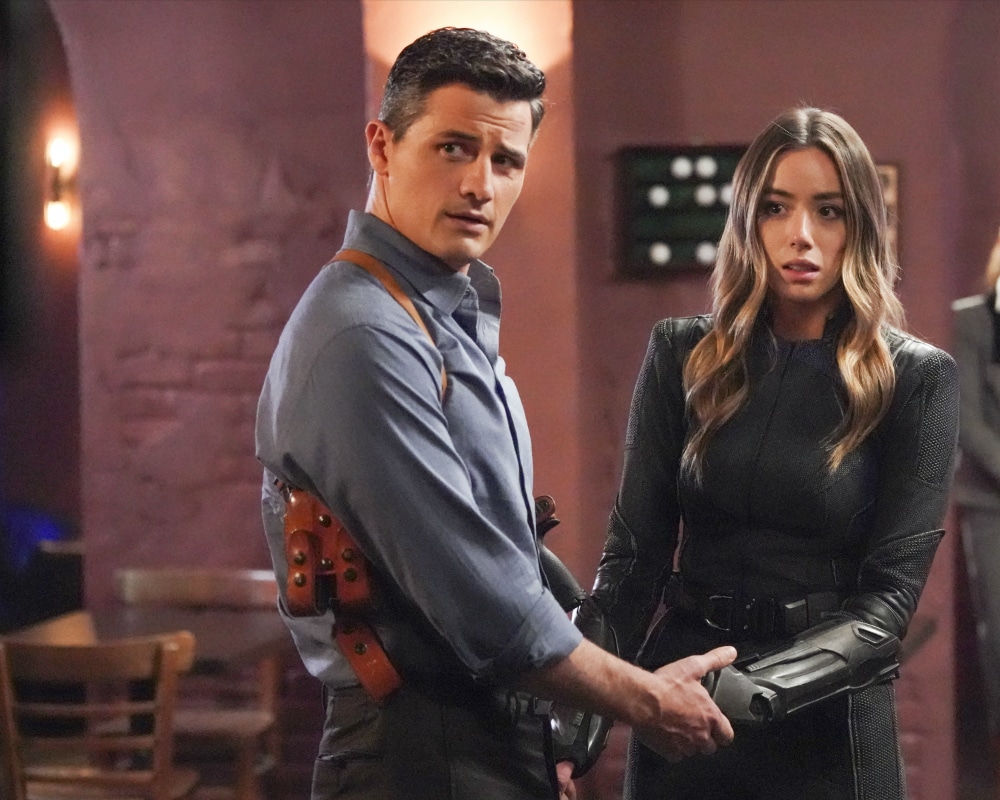 Is there any particular moment of portraying your character over the years that you’ve been grateful for?

CG: That’s really tough because there have been countless and ones that were so fun to do and so fun or hard to act. [laughs] For me, it’s more a broader, holistic thing to go from being a character who had a specific purpose in the films to a character who got to be the lead of a show with an ensemble and 130 maybe episodes, to go that deep into a character and learn so much more about them and to find out that they had deep relationships, a family, a protege who far exceeded his abilities and his expectations – in Daisy, and to get the friendships and relationships out of it that I’ve been able to, and to see her end up happily with such a classy studmuffin as Enver? I’m just so happy. I’m kvelling!

EG: I was going to say that as an actor, a lot of those beautiful moments are behind the scenes and it’s not really scenes from the show. There was a line that Deke says to my character – he gets in front of me and I was like “you took me out of my life for this”, and his line was “we all were”. He could not keep a straight face. It was so funny! We could barely get through that scene because Jeff was coming in like [in deep gruff voice] “we all were!”. [laughs] I’ll just never forget how hard we were laughing in between those takes and you guys will never, unfortunately, get to see how funny that was, you know? Honestly, I walk away with so many moments like that. It’s the behind the scenes moments that I’ll take with me forever.

CB: It’s a rare opportunity to experience such a spectrum of emotions with people who ultimately aren’t your family, and that’s why we call each other family now because we’ve all personally and professionally, on screen and off screen, have lived so much life. The wide range of conversations that Clark and I have had as friends for the past seven years as him being a mentor to me, you can’t really put that into words.

CG: That’s been a two way street and you know it.

CB: But we’d never have gotten that without time spent together and there aren’t shows that are doing 22 episodes a season. We won’t get that again. We have our families and then we have the S.H.I.E.L.D. family, and that’s what’s so special. I don’t think I’ve ever been more stressed or exhausted to the point where I can’t even cry or function or breathe, but I don’t think I’ve ever been filled with more joy and creatively filled up and laughing my ass off the way that I have on this show.  You get the full spectrum of emotions and right now, in this time in quarantine, I’ve been reflecting a lot on the wide range of those things. I would kill for those right now. 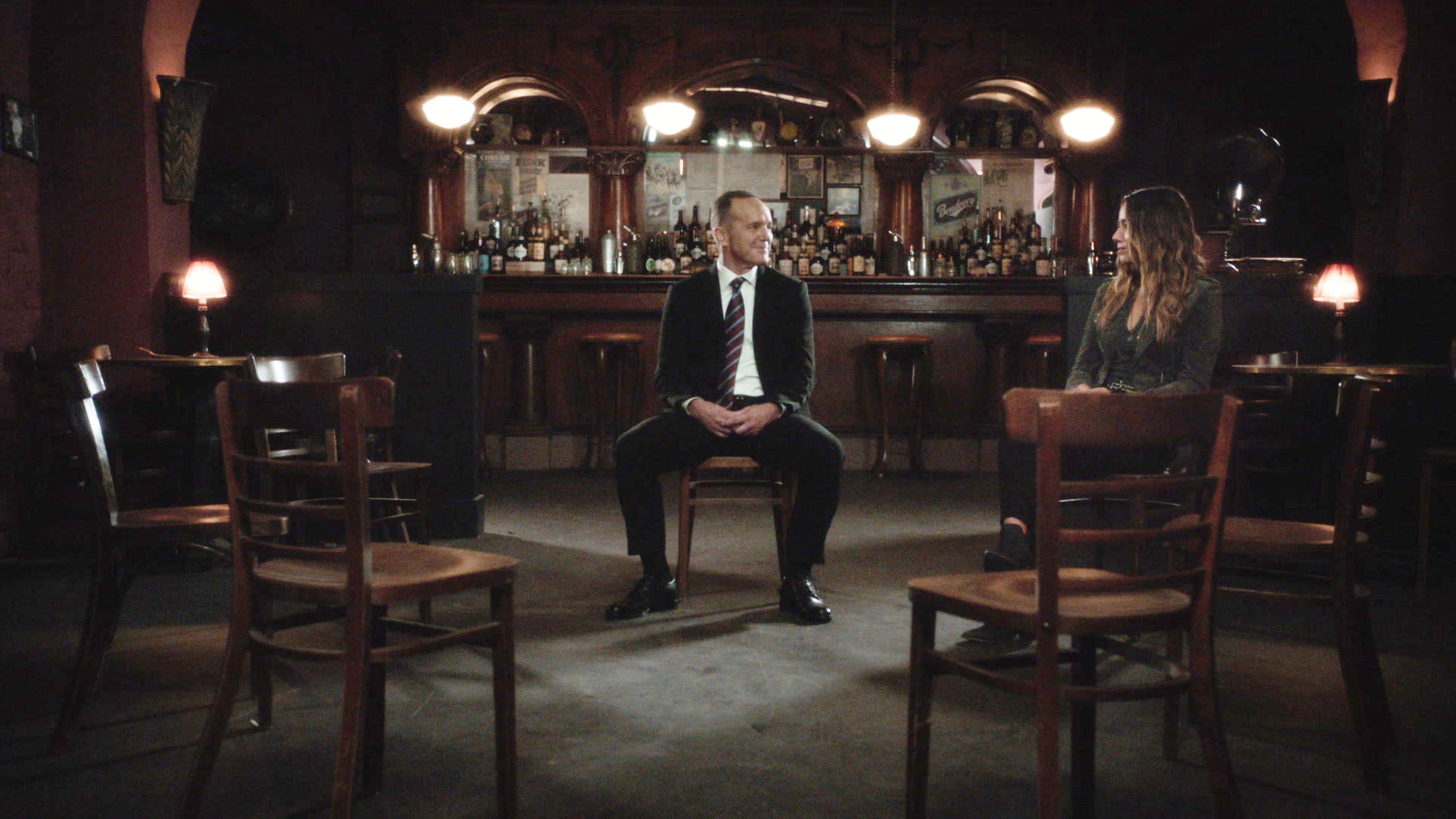