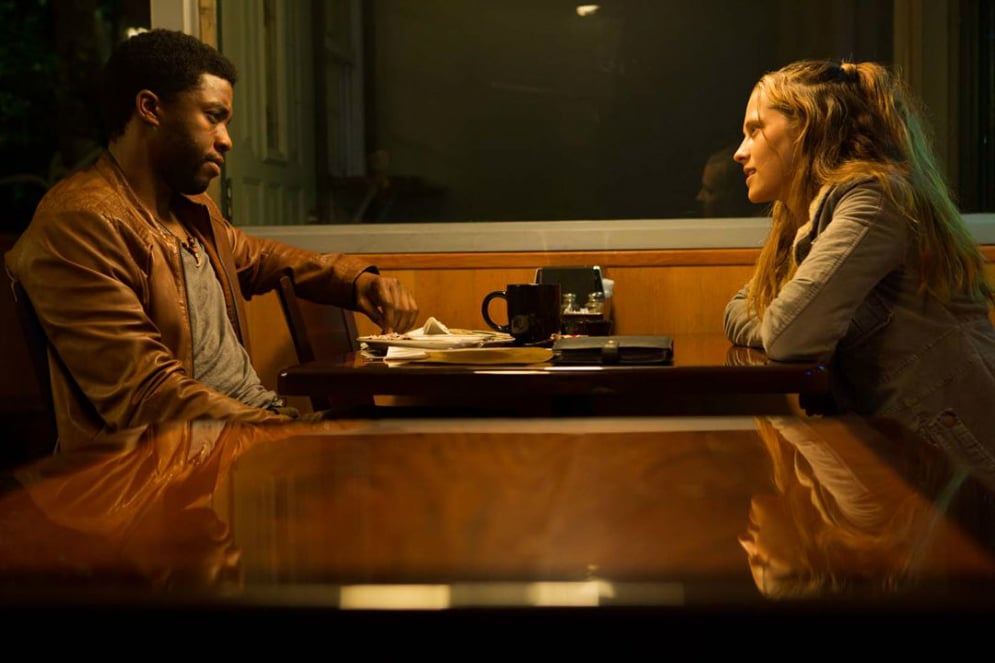 The movie Message from the King, a gritty slice of life film directed by Fabrice du Walz and starring Chadwick Boseman (Black Panther) as South African Jacob King and Teresa Palmer as Kelly, who acts as his guide of sorts in Los Angeles, is now on Netflix Canada as a Netflix Original. We spoke with Boseman and Palmer in a makeshift lounge at last year’s Toronto International Film Festival and they were two of the sweetest people I’ve had the pleasure of conducting an interview with.

The following is an edited and condensed transcript of my conversation with the pair.

Brief Take: What did the two of you bring to your roles, first arriving as outsiders in Los Angeles yourselves [Palmer is from Australia and Boseman born in South Carolina], but both now living in the city?

Teresa Palmer: Yeah, I definitely did keep that with me. You feel so small, when you first come to a city, and you don’t know anyone, and you don’t know the way of the city. So I remember how isolating that felt, and it felt very empty as a twenty-eight year old, and I tried to inject that into her. She’s tried to piece together this life in the best way she can. But she did come into the city with hope, she had a dream, greater than the life she’s actually living and I tried to tap into some of my own experiences, but nothing could really parallel that. I did tap into a lot of my husband’s story though. He did grow up homeless on the streets -he’s from Kensington, Philadelphia, one of the most violent neighbourhoods in America – and his mother had him at sixteen, and she did all the same things that my character does in the film, so I know that world because I know my mother-in-law so well and I know what she did for her son. I thought about that a lot and sort of marinated in those feelings and those conversations and just who she is as a person and I’ve injected that into Kelly.

Chadwick Boseman: I agree with Teresa that L.A. can be a very lonely place. You’re seeing things that you can’t reach, doors you can’t go in. I think that as far as the character goes, Jacob King is trying to walk a path where he can figure out where his sister has been. He has just a bag of her things, and he’s trying to piece together who she became. Who did his sister become when she came to this place? With what type of people did she hang out, to what kind of parties did she go? What was she into in terms of entertainment, drugs? He’s not really walking his own path and he doesn’t have his own dreams in this place. He’s following the bread crumbs that she left, so to speak, the map that she left or didn’t leave. To me, there’s a detective element, a mystery to his walk, but there’s a loneliness too. *gesturing to Teresa* The scene that we have in the diner, where she starts talking about what the place does to her, there’s a small reaction, a trigger. Okay, this is what his sister also went through. I’m experiencing my sister through her character. L.A. is not a place he intends to stay in.

BT: Chadwick, what does it mean to you to play Black Panther [in Captain America: Civil War and in the upcoming Black Panther film as well as Avengers: Infinity War]?

CB: There’s obviously the issue of representation—a hero that looks like you and to people that want to see that, and not just black people. I think it does something for everybody to take it out of your head that a hero has to look a certain way. It does something for you. It’s an amazing thing when you see kids dressed up like the characters, sending their pictures into my agent and manager. It’s an amazing thing that people will be dressed like the character for Halloween and view it as a hero. So that’s the reason why we like these movies, is we search for strength within ourselves, that supernatural power within ourselves to get to our own lives. The fact that this image brings up energy and power, that does mean a lot and it doesn’t have to be a white guy.

Message from the King is now streaming on Netflix Canada.

Marvel’s Black Panther will be released in theatres on February 16th, 2018 from Disney.