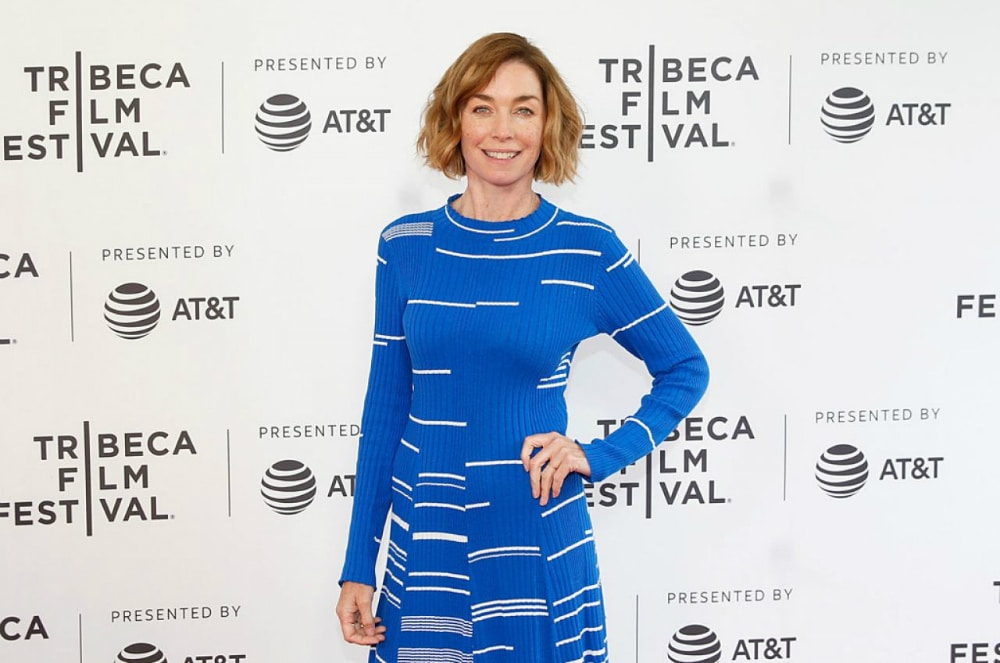 “On set, people are all on their phones: the crew, the cast, everybody. Though not Willem Dafoe, he never brings his phone to set. Pro. Umm…And now I don’t, either”. — Julianne Nicholson.

The film Monos, directed and co-written by Alejandro Landes, is an intense and challenging film. It’s about eight child soldiers watching over a kidnapped hostage and a cow in an unnamed South American country. That hostage is played by the exceptionally versatile Julianne Nicholson, and when one looks over her recent credits, she is crushing it in role after role and doing fascinating work.

Having the opportunity to speak on the phone with Nicholson was a pretty spectacular one, as you can see from the pull quote at the top (she is starring with Willem Dafoe in a sled dog title for Disney+).

Buckle in tightly, this is a fun ride, along with a movie that demands to be seen.

The following is a condensed and edited version of our interview with the lovely Julianne Nicholson.

Julianne Nicholson: For me it really just starts on the page and it’s sort of almost like an intangible, like it’s a whether I respond to it or not. Now, having done this for over 20 years, I like to read something unique, you know, that doesn’t feel like run of the mill. I like to read fully fleshed-out characters, who they are and the life they’ve led and where they are now. Now I’m getting more opportunities to work with people whose previous work I’ve admired, and so I try to seek out people who can help me get better, but I like a challenge. [laughs]

BT: And yet this movie must have been very different than what was on the page?

JN: Well, yes and no. I never visualize a film when I’m reading a script. That’s not how my brain works, but there was a life on the page, immediately, and I thought it was wild, even the words and what I was reading, what’s happening to these kids and this woman felt wild and raw in a way that usually I don’t see. That felt exciting.

BT: Were you surprised by what came to the forefront in terms of what is presented on screen?

JN: I couldn’t actually imagine, like, I heard: “You’re going to be living in the jungle”, and I’ll go: “Yeah, I’ll live in the jungle!” But then it’s like actually [chuckles] living in the jungle is something else altogether. When we were up on the mountain, which I actually find a more stunning place visually, I felt like we were driving up into another world. When Alejandro sent me the script, he also sent a look book of images that were inspiring to him, things that he was hoping to capture: feelings and images, and what he showed me was beautiful, and if they got anywhere close to capturing that maybe it would be something special.

BT: How did you go about crafting a mysterious character?

JN: Well when I first asked Alejandro, when I knew that I was going to be doing it, I said: “Where are they? How long has she been held captive? Why did they take her?” I wanted all these questions answered. And he said “actually, I don’t want you to think about any of that, but more look at it as a fairy tale. It’s a broader story than if we make it specific with those details”, and that made sense to me. I read a couple of books about people who had been kidnapped and held prisoner for various lengths of time, particularly through guerrilla soldiers, revolutionary soldiers, that was very informative.

And then it was spending time in those places, for instance, we spent a lot of time up in the mountains and I spent a lot of time in that, in myself, and it was so cold there and it was so wet there, and I had to wear the same dirty, nasty clothes every day and all the blankets were wet and they stunk. Alejandro wanted me to do all of the charcoal drawings on my walls and cell as a way of showing the passing of time, and personalizing it and something that I would probably, if given that charcoal, that Doctora would do in her cell. So in those spaces and in the discomfort of the element and imagination, I was a family and I was away from them, like obviously nowhere near as extreme as what it means to be kidnapped, but there are things that you can use from your own life as well as imagination to try to bring yourself to that place.

BT: Do you feel that it’s important that the roles you take on affect you?

JN: It is important. It’s important what I am putting out into the world. Unfortunately, it is also my job, sometimes I might take a job to make some money, so I can do those ones that speak to me. That’s part of it all, also, unfortunately. I wish that I could just do the only the ones that I want to do, but I have been able to be more selective and I feel like when people see that [pauses] like you saying that, I feel like when people see that you like to take risks to do different things, they can’t put you in one category, that hopefully those projects are more likely to cross my desk. But it is important for me to have a feeling for a character, to have a feeling for the people who are making it, with who I am going to be spending my time, who the cast will be and all those factors are important.

BT: What about the messages that you put out off-screen as a continuation of your roles. Is this important?

JN: I do think it’s important. And I do think that there’s crossover between the roles that I choose to play and the stories that I end up wanting to be telling – what I want to put out into the world. I think that what you put out into the world affects the world. I think how you even treat people day-to-day affects the world. So if you be kind to someone rather than to be rude to someone and send that person out on their day, so I definitely consider both of those things important. It’s hard to get it right all the time, but I do believe that it is important and makes a difference.

BT: You have lots of frequent collaborators.

JN: I love finding people! You just click with certain people and certain people’s work makes sense to you. Certain people you respond to and actually, it doesn’t necessarily mean anything about who they are in life, it can, but I love working with Matthew Newton, for instance. The way that I feel that he draws the best out of me, in terms of acting. I feel like he has a deep understanding of material, I really admire his kind of trying to showcase the underdog, and not in any sort of precious way. I love working with him, and you know, if you have a great experience, it’s a wonderful thing to want to work with someone again because you already have that history and shared vocabulary. It’s different looking across the table from someone and knowing them or not, or having it be the first day you’ve ever met, there’s a…you can’t fake history, really.

BT: What about Denis O’Hare, you’ve worked with him few times.

JN: I love Denis O’Hare! I made a movie with him called Tully many, many years ago. And then I had the great privilege of being in a play with him. He’s amazing, I’d love to work with him again.

BT: On your upcoming projects you’re also working with some of the best talent.

JN: I recently finished a show for HBO called The Outsiders and that will come on next year, for me it was like: Jason Bateman will be directing the first two, and I was playing his wife and Ben Mendelsohn, who I think is amazing and interesting, is the lead and I was like: “Yes, I would love to work with him”. And then they fleshed it out with Bill Camp, who is so interesting to me and he’s such a good guy and a pro, and Mare Winningham and Yul Vazquez and I was like: I’m interested in surrounding myself with people that I admire because it can definitely make you better. And when you work with people like that, the story can come out in a different way.

BT: What’s something for which you hope in terms of this film?

JN: With this film, I hope that honestly people keep getting to see it in the theatre. That’s my biggest hope for it. It feels like a special story and one worth seeing, for me I would like it to keep doing what it’s doing and stay in the theatres for a while and get more eyes on it. Colombia chose it as the submission for the International Feature, which is very exciting, for Oscars and for The Goya Awards.

And then after that, I’m writing a little list of directors and I hope that I have people with who I want to work, and hopefully keep making great stories and filling new shoes.

BT: Why do you feel that it is important that Monos is seen on a big screen?

JN: I love going to see movies in a big theatre. I feel like our attention is different when we rig ourselves to that place and that people, at least my age, grew up doing that. It’s like ‘phone is off, it’s in your bag’, and you’re there to have a completely immersive experience. In this case, especially because those locations are stunning and Jasper Wolf’s photography is beautiful and those kids faces are stunning and unlike anything that we would ever see in American theatre, it feels like [long pause] totally, the best way to see it is in the theatre.

I also feel like there’s something about a shared experience, a collective experience, when you watch in a theatre. I feel like you pick up on the energy in the room and the experience that people are having around you and I think, I feel like that’s pretty great. I don’t know if it even taps back to storytelling around campfires, hundreds of thousands of years ago, I don’t know, but it feels much more special to me to be able to see it in the theatre.

Monos opens at the TIFF Bell Lightbox in Toronto, the Princess Edmonton in Edmonton, and at the Plaza Calgary in Calgary on September 27