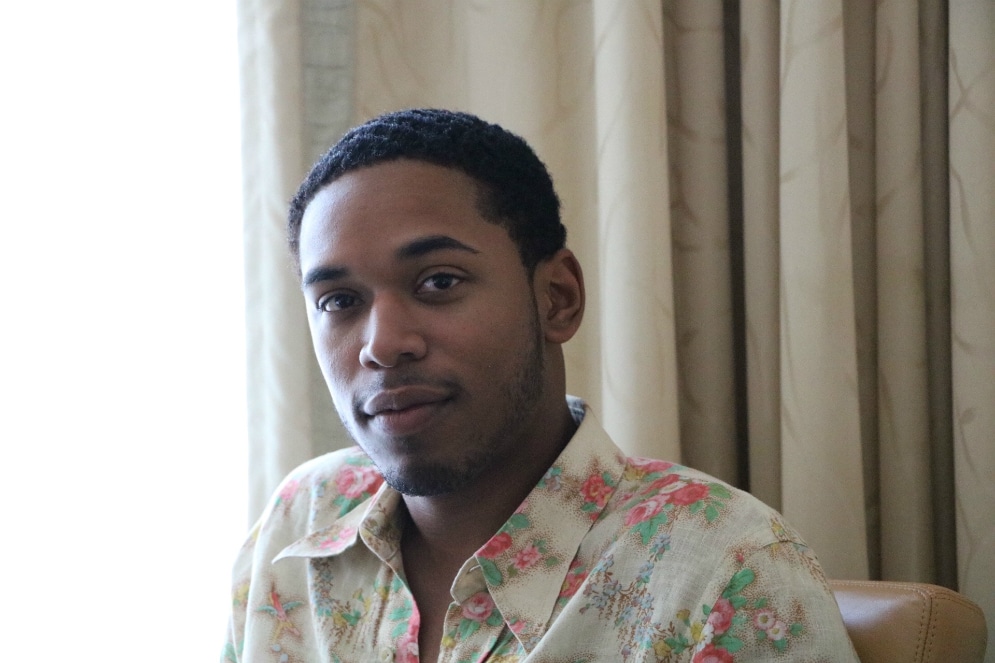 Part of the fun of TIFF is the unexpected surprises. We had been talking about getting to speak with Kelvin Harrison Jr. (who appeared in three festival films – Monsters and Men, Assassination Nation, and Jeremiah Terminator LeRoy), but the way that it went down was a bit of a surreal moment that even we couldn’t imagine. It took a delayed flight, but we somehow ended up in Kelvin Harrison Jr.’s hotel suite upon his arrival in the city. This made for an interview that felt intimate, as the answers in retrospect are filled with a sense of calmness. By the time we caught up with Kelvin later that night at the Jeremy Terminator LeRoy red carpet, it felt like a reunion with an old friend. It was a glimpse into the soul of a really talented and multi-layered performer.

The following is a condensed and edited interview with the charming Kelvin Harrison Jr.

Brief Take: What was your experience like coming to TIFF for the opening weekend for Monsters and Men and now the closing night film (Jeremiah Terminator LeRoy)?

Kelvin Harrison Jr.: It was cool to be here for Monsters and Men and to see the response in Canada. It still resonates a lot with people. And it’s a beautiful film that I was happy to be a part of.

BT: Two of your films were indies at Sundance and now are NEON titles. What is that like for you?

KHJ: It’s crazy because it happened so fast, especially Monsters and Men with Sundance. We filmed that movie the year before, in like…September? And suddenly he had edited it, and Sundance…four months, it was incredible! I was like “There’s no way you’re going to make your deadline” and he did it! We screened it and we saw how beautiful it was, and I felt like it was the next day, Neon wanted the movie. It was just one of these moments in which we knew we made something special, and we knew we did it for no money, with little time, but we shot the movie in three and a half weeks. It says a lot about Neon and the choices that they make and the stories that they want to tell, and that they took this bold step to take this really small, very subtle, understated film and wanted to give it a wide release.

Monsters and Men really gives a voice to so many people and different points of view for where they stand with police brutality and Black Lives Matter, and then you have Assassination Nation which really gives a voice to the youth and how we feel and how we thought, growing up in high school, and how social media affects us, and also allows us to be empowered by our decisions and our sexuality. It’s been cool to watch NEON take these two films. It’s been interesting.

BT: What do you think of how these two films are coming out at relatively the same moment in time?

KHJ: I came into this industry as a musician, and I happened to respect the craft and be really excited about learning and getting involved and hoping that I would be able to come out of New Orleans and actually just get to work. Then Hollywood telling me “these are the roles available to you”, and it was like The Birth of a Nation and Underground and Roots, slave narratives, then the Black Lives Matter movement comes and you become like the poster child for a young black man in America. And they’re important stories and I’m glad that I got to experience them and learn so much about myself and my position in America, but it was alarming ad jarring at first because I was like “I’ve had a very broad range of experiences in my youth, and I don’t really know if all of those have been touched on. This has kind of been placed on me and these are the roles available to me”, so that was my experience going into it. Now I am at a place in which I guess I’ve done the slave, most of the racially-charged films, that I think that I’m ready to really push those boundaries again further. BT: Where are you now in your career arc?

KHJ: What’s so exciting about it all is that I also do a lot of these movies in which I read scripts and I want to learn something. If I read a script and I kind of go “oh wow, I have this really weird reaction to this”, and I don’t know what it is, but that’s why I had to do this, and then I finish the movie and I kind of go, “okay, I’ve evolved again, I’ve been reborn, almost”. And I feel like that keeps happening. Right now I guess I’m just looking for that to continue as I grow older. I’ve just turned 24 and I’m done playing teenagers. [laughs loudly] I’ve dealt with a lot of things from my childhood and I’ve fleshed some of that out through my work, and when you are playing a young person, you go “okay, how was I at 17? How did I see the world? How does this kid see the world?”, and you know, I mush it all together and create somebody. And now, I’m like “okay, I haven’t done anything in my adult life”, and that’s through my whole career, really, I’ve just been an adult working and playing a 17 year-old. [laughs] So I guess that’s now where I am – I’m ready to figure out where I am as an adult. BT: Can you talk about working with Kristen Stewart in Jeremiah Terminator LeRoy?

KHJ.: It was interesting. We didn’t talk much and it was kind of fun. I met her the first day and we just started the scene. [laughs] They just called and asked if I wanted to do it; I think someone better dropped out.

BT: That’s not possible! You and Kristen are so electric on screen together.

KHJ: Definitely someone with more experience. It was fun, but I was nervous, she’s Kristen! [laughs] So I show up, and I talk to Justin (Kelly) a lot about Sean, and I have my ideas of what I want to do with him. Then I get there, and we start the scene, and that was the only interaction we had. And it was in the middle, and we don’t even say anything, like I’m cutting something, and she looks at me and I look at her, but it was like we had this unspoken understanding of where we both were in our lives in real life and in the story, and that carried on. We never talked about the material; we spoke through the characters in that moment. It was interesting, it was really interesting. I remember this one thing in which we improvised this stuff and she told me, she was just like “I see you”. And I was like “I see you“. And I think we both were like these misfits, these extra-terrestrial beings that don’t belong on Planet Earth, it feels like it sometimes. And I guess that we just, we understood it, and we just did it. It was kind of unreal, honestly, that experience.

BT: Was that the restaurant scene?

KHJ: Not the restaurant scene, by that point we were having a ball. That was like the last day. I think that the first thing that we shot was towards the middle of the movie, it was like…maybe it’s not even in the movie, but the first scene I was chopping fruit and she just looks at me, and I look at her, and that’s it. And also to see it all stripped down, and to see her bare her self, do you know what I mean? And she’s just herself and he’s just himself, and that’s why they connected. It’s these two queer people, and they just love each other and support each other and it’s beautiful. BT: Who is someone with whom you’ve enjoyed working that you’d jump at the chance to work with again?

KHJ: I really want to do another movie with Jennifer Ehle. I did two of them with her and she’s fantastic. She’s incredible. She played my lawyer in Monster and then we did Wolf Hour together. I didn’t have any scenes with her, but she’s incredible. She’s so smart and so giving as a person and as an actress, and I don’t know,  I want to work with her on something in which we have more of an interaction and she’s not playing my defence attorney. [laughs] She’s definitely someone who I want to work with again on something else.

BT: It Comes at Night was such a great unsettling film, and we’re excited for your next collaboration with Trey Edward Shults, Waves.

KHJ: I finished Waves about three weeks ago now. It was incredible! It’s going to be so good. Trey (Edward Shults) is special. It Comes at Night is very heartfelt. They marketed it as a horror film but it’s not a horror film; it’s psychological or social horror. Opportunities are so rare in which you get to see, like in the horror film genre everybody says “oh, the black guy dies first”, because I’m the lead in the movie. For Trey to write the story, and it’s really about him and his father in a lot of ways and all the metaphors and the symbolism of that, and to kind of say “I see you as me”, and that’s basically what Waves is too. He kind of wrote the script for me and it was about him growing up and being a wrestler and dealing with being obsessed as a teenager. But he once again saw me as him, and I’m just a little black kid from New Orleans, and he’s from Texas and he’s white, obviously. [laughs] For him to blur these lines, I think that’s progression. It’s not putting us in this box.

Monsters and Men is currently playing in select US theatres and Assassination Nation is playing in theatres everywhere!