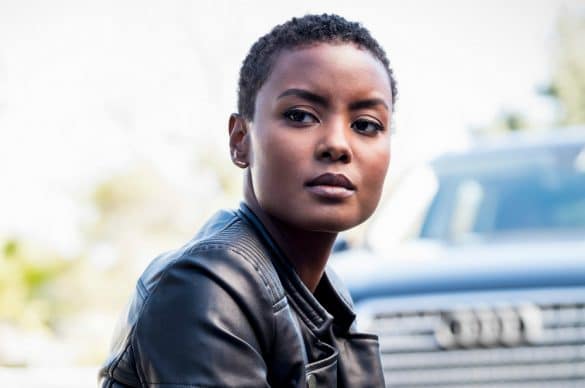 Actress (and soon to be producer) Andrea Bordeaux is a woman of many talents. Her impressive career has included successful stints as a power lifter, model and now as one of the leads on the long-running show NCIS: Los Angeles. Acting opposite LL Cool J, Chris O’Donnell and newcomer Nia Long, Bordeaux’s kickass Special Agent Harley Hidoko has quickly emerged as a fan favourite.

I was delighted to talk on the phone recently to the multi-talented Andrea Bordeaux about her experience working on the show, her role models and her supportive fans.

The following is a condensed and edited version of our engaging conversation.

Brief Take: Now that you’ve wrapped the season, what have you liked best about working on NCIS: Los Angeles?

Andrea Bordeaux: Probably the best thing about being on the show would be having consistent employment. [laughs] That was fantastic. [laughs] On a more serious note, overall the show was an all around incredible experience in that it was kind of like boot camp for me in being my first time doing a show of this scale and doing a role of this size. It was really an extended crash course in making action television. This experience is something that I’ll be able to use throughout the rest of my career. I’d say my greatest professional achievement is getting to work on this show.

BT: More than any other action-oriented show, the cast here seem so in-sync with one another. As a viewer I can sense the connection that everybody has with one another on screen and off. What was it like working with an ensemble like that?

AB: Listen, the cast really is a family and such a tight knit group of people. When we’re on set and working, it’s such a great vibe and there’s such great energy. Everybody brings lots of humour and life, really. The veteran cast members, the ones that have been there since day one, such as Todd [LL Cool J] and Chris [O’Donnell] and Eric [Christian Olsen] and Dani [Ruah] and Barrett [Foa] and Linda [Hunt], they are always on their game. Every single day when people show up, they show up ready to work, they show up prepared, and it’s just such a great energy on set. You can tell that, even after nine years of doing this, they still really love their jobs. It made me love my job, seeing how much they love theirs.

BT: NCIS: Los Angeles has a HUGE dedicated fanbase. What have been some of your most memorable fan interactions?

AB: All the fans are the best! They are so kind, supportive, loving and vocally defensive of everyone on the show. What I love about the fans, in particular, is that they make really amazing photo edits of cast photos. Things that we post on Instagram or clips that are taken from the show, they’re so artistic and inventive that they create these really awesome images. Of course they share them and tag us and I try to like each and every one of their creations. I love how interactive they are! They’re also not afraid to write me messages or write comments about how supportive they are. When I first started on the show, I was a little bit nervous about my character coming in because Hidoko and Mosley [Nia Long’s character] walk into Los Angeles and they shake things up. The introduction of these characters may have been controversial or polarizing but the fans started responding to me right away. From the time the first episode aired, I was getting tweets and messages from people saying that they love my character and they want to see more of her. Then as the show has grown the fans have really fallen in love with Hidoko even more. The fan interaction has been so much fun. It’s probably the most fun thing about being an actor on the show.

BT: What’s coming up in the next few episodes for Hidoko?

AB: Well we are going to learn more about Harley’s background. We’re going to learn more about her husband and get a little insight into that relationship and the circumstances around that relationship. I can also say that tensions between the team and Mosley and Hetty will all come to a head in the last couple of episodes of the season. It’s going to get very, very intense. And the finale is going to blow everyone away.

BT: You’ve already accomplished so much in your career. What would you like to accomplish next?

AB: Acting is just the tip of the iceberg for me, in terms of what I want to do in the industry. Acting of course is my number one priority, but I want to produce, I want to direct, I would love to learn how to write scripts. I’m actually going to be producing my first short film this summer. It’s early, early pre-production stage. We have our script and our team together and we’re planning on filming it next month.

BT: Who are some of your role models in the industry?

AB: Oh goodness, I have so many and for so many different reasons. Angela Bassett – I’ve been a fan of hers since I was a kid. She has done so much brilliant work and people know how amazing she is, but she’s still so underrated as an actress. She doesn’t get as much shine as she deserves. I love Tiffany Haddish! I think she is the definition of a carefree black girl. I love how she lives her life unapologetically, she is exactly who she is and she doesn’t care how you feel about it. I think that’s fantastic! Beyoncé because, well, Beyoncé. [laughs] I’ll be seeing her at Coachella this weekend. Everyone is jealous. [laughs]

AB: Of course! This is a conversation that I’ve had amongst my peers for as long as I’ve been in the industry. This is a conversation that sounds new to the masses, but it’s something women, and women of colour, have been talking about for years and years and years. As far as my experience, going back to NCIS: LA, one of the things that has impressed me a lot about our set is how diverse it is. There are so many women in the crew, we’ve had several female directors this season, women of colour directors, black male directors, and young directors too. Same with the writers on the show. I do wish there were more black writers on the show, especially now that the show features two black actresses, but I still think that the current team has done an amazing job of creating a very diverse television show. The guest starring roles and the co-starring roles are also always diverse. So I do think the show is very ahead of the curve in terms of championing diversity on television.