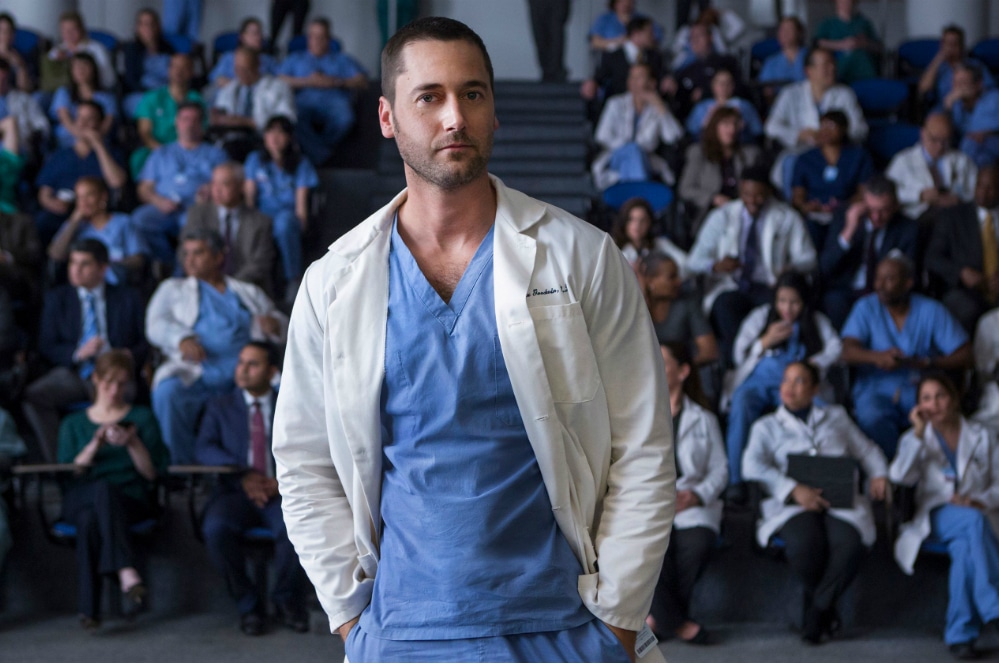 Everywhere you look, the signs are there that Ryan Eggold is your new TV crush, and that New Amsterdam is the breakout series of the fall season. The show revolves around Dr. Max Goodwin (Eggold) and is based on a real story about a hospital in New York (Bellevue), and the medical director who arrives and attempts to make sweeping reforms, while simultaneously struggling with his own medical diagnosis. Ryan Eggold is fantastic in the series, leading a diverse and accomplished cast including Janet Montgomery, Freema Agyeman, Jocko Sims, Canadian Tyler Labine and international superstar Anupam Kher.

You may also recognize Eggold from a shocking turn in Spike Lee’s Cannes Grand Prix prize winner BlacKkKlansman, which he discusses in concert with New Amsterdam.

The following is a condensed and edited version of our phone conversation with the steely and quietly confident Ryan Eggold.

Brief Take: What was something that’s surprised you about New Amsterdam?

Ryan Eggold: It was just really cool to see people who do this for a living, who are really out there helping people, respond to it. I appreciate the hard work being reflected, I hope accurately. Those people are being inspired by the message of the show and that’s really cool because ultimately they are the folks that are really doing it, who we are telling the story about.

BT: The cast is so incredible and mesmerizing on screen. What do you think is the secret ingredient for having an ensemble that works so well together both on screen and off?

RE: That’s a good question. I think it’s a bit of serendipity. They do great jobs, these actors with whom I am grateful to work, they are phenomenal and great people, really good folks. And I think that David (Schulner) and Peter (Horton), the creator and producer on the show, are also very sweet and I think that they set the tone of care. They walk the talk about treating people with respect, and it’s just a really fun group of people. I’ve made a lot of good friends so far, and we’ve got all the group threads going, which is ridiculous, and memes and things being tweeted, so we’re having fun.

BT: Do you think the international and diverse nature of the cast has something to do with that palpable chemistry?

RE: Absolutely! That’s a big part of it. I hope that it’s reflective of this show. Bellevue is such a melting pot for people all over the world and people for all walks of life – poor, rich, every ethnicity, every gender and orientation. So if we reflect that in the cast more and more, the players we bring on the future, the players we bring on for one episode, stuff like that, that’s great, that reflects real life.

BT: What was something that you learned about yourself from playing this character?

RE: That’s a great question! Whenever you play a part, you’re always looking for “what can I relate to?”, so the more that you not have to fake is better. You know, Max has a real difficulty being vulnerable and letting people in. I think that he spends so much of his time looking outward asking his questions, that “how can I help?”, focused on saving everybody else, that he can’t quite slow down and admit to his wife that he has cancer. I definitely think that I often handle things much in the same way, as we all do, but I think that when something’s scary, you’re intimidated.

BT: You’ve had a lot of exciting developments in your career recently, including your work directing and writing. Can you talk a little about that journey?

RE: I feel really lucky and excited right now. I feel lucky that the last two projects that I did were both true stories and they were both having a conversation about things that are relevant and that matter to us now on a daily basis and reflect the lives of real people, that are doing things that aren’t just fictional made up people. So I feel really grateful doing that. I’d love to continue in that space. And I’m just excited for what’s next and where it’s going to go, and like you mentioned, directing a little, writing a little, and I have a few things that I’m kicking around a bit.

RE: I appreciate that, man. I couldn’t agree more! And it’s nice to hear the sincerity in your voice when you say that because that’s what I responded to about the show, the characters, and I like it, but then I clicked into, okay, this is a bigger story about how do I, the individual, get involved, where we come together and how do we make it better? We’ve done the part, obviously, where we argue, so how do we get through to that next step? So anyway, I appreciate you saying that, because a TV show is never going to save the world but it’s nice to be, like you say, a part of the conversation. So I appreciate hearing that.

BT: You’ve written and directed before. Would you feel comfortable doing so for New Amsterdam?

RE: That’s up to Peter and David and everybody, but I would love to! I wouldn’t ask that now, because it’s season one and let’s just develop the show, but yeah, if we have the opportunity to continue then I would love to have the opportunity to maybe even write one, if David would allow me to crash his writers’ room. They do such a great job, so I would try to live up to what they are doing.

New Amsterdam airs Tuesdays at 10 p.m. on Global TV and NBC. BlacKkKlansman is available on Blu-ray on November 6th.