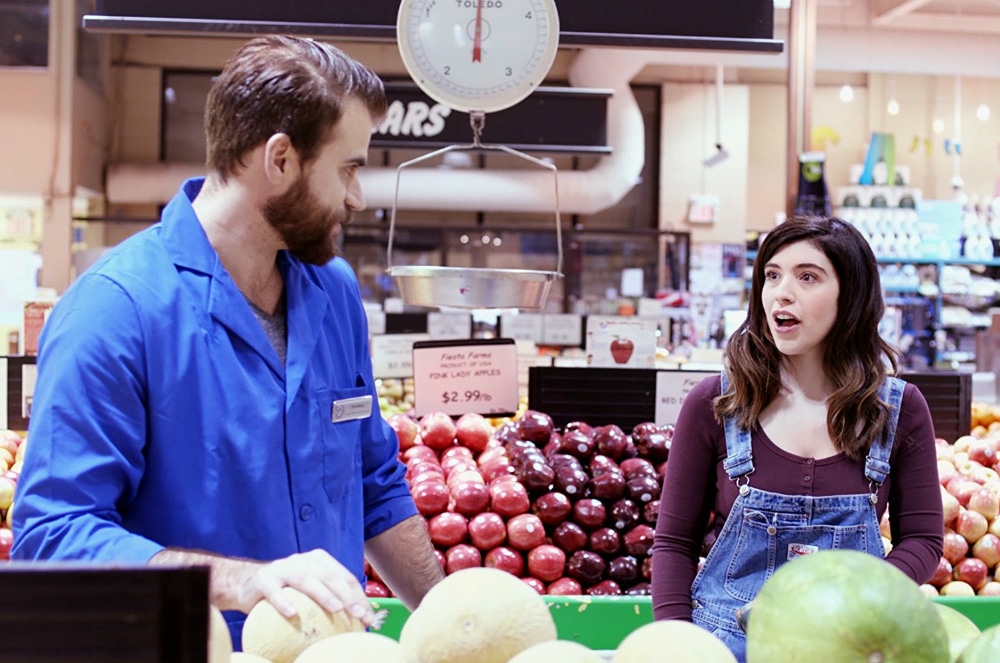 This year’s South by Southwest has really interesting projects and one in particular that catches our eye is Rebekah Miskin’s Night Owl series. Shot in Toronto, the series will be receiving its world premiere at the SXSW festival, which is a perfect launching pad for this creative project.

We were lucky enough to receive the opportunity to sit down at a downtown coffee shop with the energetic Miskin prior to the series premiering at South By. Miskin was a pleasure with whom to speak and espoused about the show which she created, directs and stars in as Jessie. She will be making waves in the industry and this series is a total gem.

Here is a condensed and edited version of our conversation.

Brief Take: How much of Night Owl is yours independent and how much is it your collaborators’?

Rebekah Miskin: You’re only as good as the village that you build around you. It is a collaborative art. That being said, from conceptualization to realization, it was me. I had to build it. Without the support of Gillian Muller, who was directing the episodes with me, and a couple of other key people, Miriam Levin-Gold, my producer, and all of our incredibly talented cast and the friends that rallied around us, there’s no way it would be what it is, but it definitely very much comes from a personal place and definitely my story. That was part of my vision too, to build a community of creators, and a community of my friends, who I love and adore, with whom I get to make art.

BT: What was that concept of Night Owl?

RM: Night Owl came out of the loneliest time of my life. I was living in L.A. and I felt like everything was out of my hands. I wanted to make something and see it through from start to finish, where I didn’t have to ask permission. In terms of web series, I didn’t understand them (this was a couple of years now) and then I saw High Maintenance. Then I thought: “Oh. I get it”. What was brilliant about the idea was that it’s so unbelievably contained and specific and simple, yet unique and really original and funny and came from a very genuine place. And I thought, “okay, now I understand why people make web series”. I was racking my brain for a show idea, super lonely, living in L.A., not a lot of friends, and at most, have an audition or pretend to go to a workout. I’m sitting in my apartment and thinking, “great, I don’t know anybody, I have no friends, I’m going to write like crazy, just get so much done”, but I just get stir-crazy and of course, I am a night owl.

And I get to this point where I’m just like, “I want to have a walk, and get out of this house”, but I live in Los Angeles, and it’s one or two in the morning and I’m by myself. So I get in my shitty rental car and go to this 24-hour grocery store near me, so I can clear my head, get a snack or a magazine. I started to see the same people in the store. “Oh wait, hold on a second, this is the idea!” It’s one location, and it has the potential to be a real direct line to all the things that are eating at me right now, but in a funny way. In a way that I can make fun of it, rather than dramatize it or make it a “poor me” kind of thing. I’m like “this is kind of funny”. Although I’m still going to the grocery store and making friends with people in the most unlikely place. In many ways, that’s the engine of Night Owl that this is a girl who can seemingly only make friends in the grocery store in the middle of the night.

And even though that’s wonderful, it’s kind of a problem. It’s like why doesn’t she feel that she can be herself or make real friends anywhere else? What does she need to learn from this place that she can bring into the rest of her life? I had this epiphany that the grocery store is sort of like Oz, and Jessie is sort of like Dorothy, and when she goes there, she feels like she can be all the things that she can’t seem to be in the real world and there’s something kind of cool about this magical little hub, this night, where she can be her real, unadulterated self and connect with the store, with the people there.

BT: Where did you shoot and was it at night?

RM: I remembered Fiesta Farms, at Christie and Dupont, and thought, “I’d much rather shoot at an independently owned store than in a chain”. I ended up speaking to the owner of Fiesta Farms and I explained the series, that it takes place in the middle of the night, and he said, “that’s great, because you can’t shoot during the day because we’re open”. So we shot ithe whole first series in three nights, and I would say that that was really our greatest challenge. I prepped more than I ever prepped in my life. I made this document that I was calling  a story grid, it was a shot list plus boards, drawings notes on characters, arc, where we are in the series, objectives, and this huge grid and massive spreadsheet so I was never lost, as it’s difficult when you’re in front of and behind the camera. I couldn’t have done it without Gillian [Muller] being the eyes and ears.

BT: What did the Night Owl cast bring?

RM: The actors are something about which I am truly proud because our cast made the show what it is. It is all about trust. Particularly with Jesse Camacho, who is one of the funniest human beings I’ve ever met on the planet. The joy of being totally present in the moment with someone and getting to have fun with that, when they are as talented as someone like Jesse, so much amazing stuff came out of those improvisations. The same thing with Daiva Johnston, who plays Mel, and a lot of the actors are my friends. Tara Joshi and Katie Boland are two of my dearest friends, both incredibly talented. Tara is quite well-known for being hilarious and I remember watching the trailer for the web series in which she was starred in [V Morgan is Dead on the KindaTV YouTube channel], and I was laughing my ass off, she’s so funny.

But Katie was like this breakout diamond. It’s funny, because we collaborated before, we actually directed a short together years ago, but she always gets cast in very serious roles and always gets really dramatic stuff. So when she comes in and gets to be funny, it’s awesome, because she’s hilarious, she’s absolutely hilarious and she really killed it. Everyone, for those with whom I hadn’t worked with as much, were pleasant surprises. It was such a magical time, everybody got along, everybody checked their ego at the door, and there’s something about walking on set at a grocery store. We joked that the tagline should be “groceries never lie”, because the middle of the night, you’re shopping, in your sweatpants, and cashing out with like, Kraft Dinner and a pint of ice cream, something about that is telling the truth about where you’re at right now. *laughs* It was humbling for all of us.

Night Owl plays at the Alamo Lamar on Sunday March 11th at 3pm as part of the SXSW Festival. For more details click here