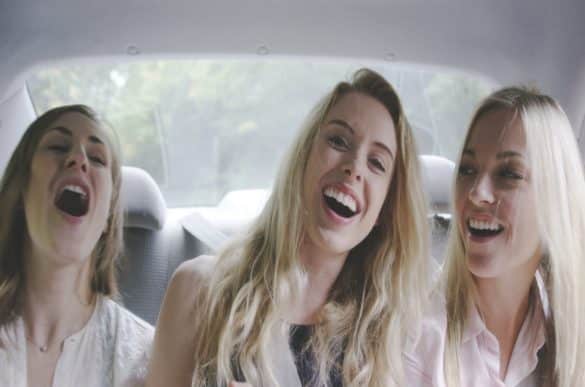 Canadian actress Winny Clarke first came to our attention in her star-making role in Almost Adults. Her magnetic performance in the Sarah Rotella-directed/Adrianna DiLonardo-penned feature catapulted her to fame alongside her beloved co-stars Elise Bauman and Natasha Negovanlis. In Nobody Famous, which premiered to critical acclaim at the recent Whistler Film Festival, Clarke reunites with storytellers Rotella and DiLonardo in a darkly comic depiction of competition amongst a close-knit group of struggling actors.

We had the wonderful opportunity to talk to Winny Clarke on the phone prior to the movie’s theatrical release in Toronto and the following is an edited and condensed version of that captivating conversation.

Brief Take: Congratulations on the film and thank you very much for posting about your mental health struggles in a recent Instagram post. It meant a lot to me and I’m sure it meant a lot to your other followers who will now no longer feel alone in their struggles.

Winny Clarke: Oh, thank you! As someone who has a small voice, but a voice nonetheless, this year I’ve started feeling less ashamed of that part of me and I imagine that a lot of people are going through the same things. I definitely want be as open and transparent with it as I can so that means a lot, thank you.

BT: You’ve worked on a few projects with Sarah and Adrianna now, most notably Almost Adults, what has your experience been like working with them?

WC: I worked with them first on Almost Adults, which is where I met both of them. I auditioned for the film and got it and my relationship with them has really grown in the last three years. I worked with them on various projects for their YouTube channel and then they brought this movie to me, which I’m so grateful for. It’s just been such a great experience to work with both of them. Sarah, as a director, really finds unique ways of pulling out the emotions or whatever needs to get across on screen. She was really a great guide for all of the actors to thrive on set. And then Adrianna, she works so hard on her scripts. Both of them are so easy to talk to and they’re so open to conversation around how, myself, as an actor, feels and what they’re looking for as well. I never felt stuck in anything and I really felt like I always had support around my portrayal of my characters in both films that I did with them.

BT: Had you known the other actors in the film prior to shooting?

WC: Yes. The only person that I didn’t know very well was Gráinne, but that actually worked out well for us because we don’t necessarily love each other in the film. In the course of the 9 days that we were all there together, I mean there was nowhere to go. [laughs] We were stuck at the cottage with 13 other people but we got to learn very quickly about one another. [laughs]

BT: Since the Canadian film and television industry is so small, I feel like there’s a lot of support amongst the people within it. The film speaks to the seething jealousy hidden bubbling at the surface of the acting community but do you find that there’s more jealousy or support?

WC: I do find that there is a lot of love and support. I think that some of the underlying themes of jealousy, they’re obviously exaggerated in the film, but there’s truth there too. As human beings, especially in this day and age where we’re putting our best selves forward on social media for everyone to see, you do compare yourself to any number of people. In the Toronto acting scene specifically, the women here are just incredible. I think we’re in this groove and rhythm where, if one woman does well, we all are. We’re building these blocks of success of very talented and very dedicated women in this city and that’s exciting to me.

BT: There’s certainly a lot of pride and support in the city for you and your Almost Adults co-stars Elise Bauman and Natasha Negovanlis.

WC: Yeah! I feel so lucky to have been a part of it. I still can’t believe how many supporters we all have. I just love them all so much! I’m so grateful for their support and it means everything to me. It’s exciting to see everyone grow and there’s no better feeling than seeing them thrive in their new projects.

BT: Looking ahead, who would you still like to work with in the industry?

WC: Oh I’d love to work with Elizabeth Banks. She’s doing a lot right now for women in comedy with her WhoHaHa brand. She’s a triple threat to me – she acts, directs, produces – and I think I could learn a lot from her. She offers a lot of value to everyone who works with her.