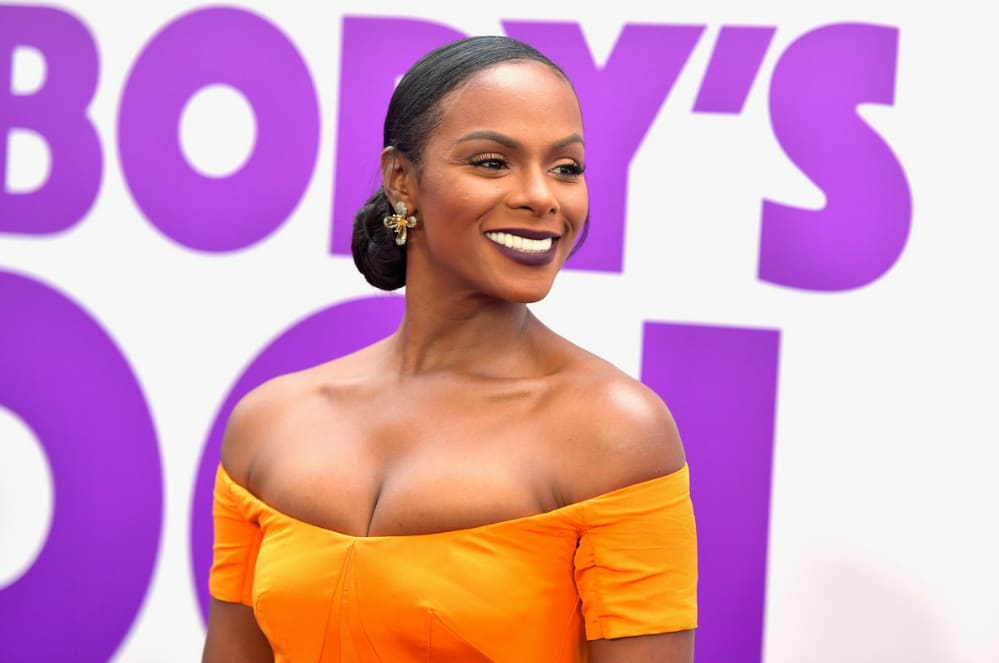 It wouldn’t be hyperbole to say that Tika Sumpter was my ray of sunshine on a cloudy day during the recent Toronto International Film Festival. When I was waiting for my interview with the actress-producer, I overheard through the junket room door her laughing and talking excitedly about Lisa Turtle from Saved by the Bell. I assumed that because of the candor and ease in which she was chatting (and the laughing that seemed to overtake the bubbly conversation at times), she was speaking with someone on her publicity team in between interviews. Turns out she was just wrapping up with the interviewer with the slot before mine. He left the room with a beaming, genuine smile on his face (which is very rare during junkets) and it wasn’t long before I saw why. Tika Sumpter is a delight. She immediately made me feel like I was talking to a close friend and after wrapping up our one-on-one interview in her suite, she asked if she could give me a hug, and it was probably one of the best surprises I had for the whole festival.

Brief Take: Tell me about Nobody’s Fool and what stood out for you while you were reading the script?

Tika Sumpter: Well I play this kind of uptight woman who seemingly has it all except for a man in her life. Then her sister, played by Tiffany Haddish, now Emmy winner Tiffany Haddish!, gets out of jail and, through the course of the movie, her sister brings out the very best in her. She learns that sometimes the right person has been there right in front of you the entire time. I loved the female empowerment aspect of the script, that these women, myself and Tiffany and Whoopi (Goldberg)’s characters, come together and are there for one another. I also loved the complexity and the realness of Danica, because you don’t often get to see that in women in films.

BT: And you get to work with Tyler Perry again, not too long after after the huge success of The Haves and The Have Nots.

TS: Yes! You know I’d worked with him a number of times and he’s amazing. He’s so supportive and always wants everyone to succeed and show the world what they’re capable of. He’d seen Tiffany Haddish before all her success of Girls Trip and he’d worked with me before a few times, and he just really invests in the talented people he works with. I love that this is his first R-rated film but it’s also full of interesting, real, complicated, raw, layered and messy characters who end up finding love in one another, and it has that really heartwarming feel to it. 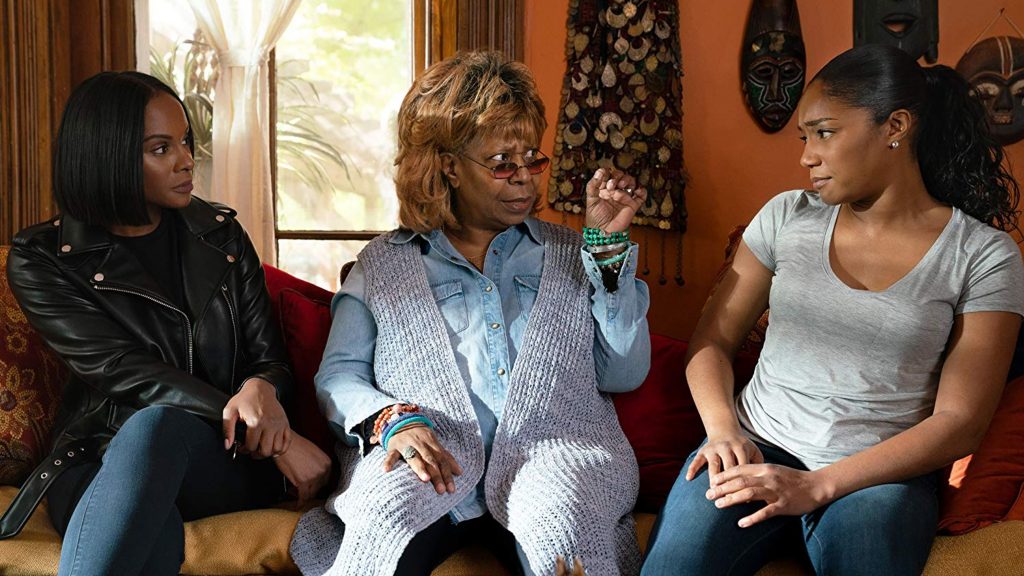 BT: Before you blew everyone away with your portrayal of a young Michelle Obama in Southside with You, I first saw you on Gossip Girl, standing up like a boss to Chuck Bass, and I knew right then and there that you were going to be a star. You were just so mesmerizing to watch and your character was the only one that told that spoiled brat what’s what.

TS: Aww!! I mean somebody had to! Oh my God, that was such a great experience. I was like “this is fun! I’d like to do more of this”, so I was grateful that they gave me a great arc and it was just a lot of fun.

BT: What drew you to The Old Man & the Gun and what was it like collaborating with David Lowery?

TS: When I read the script, I connected to it and I got to talk to David about Maureen, and then he offered me the job. That was amazing, getting to have that connection with a director. David Lowery is literally a dream director because he loves talking about the characters and talking about the scenes, but he’s a doer. He knows what he wants and he was easy to work with, much like Tyler Perry. If I did have something to say about something in a scene, he’d say “okay, let’s try it!”. He’s just an actor’s director and it was a dream to work with him. His vision and the visuals are just so visceral and so cinematic, and the fact that he shot it on 16mm so that there’s a look, there’s a feeling, there’s a vibe you feel when you’re watching it, that is very cool. He’s a real filmmaker and lover of film.

BT: What did you like best about playing Maureen?

TS: You know she’s kind of the backbone of this family. She doesn’t have to say much, but when she does say something she’s not nagging you. You can either do it or you don’t have to. I like to see her as someone who compels people to do something, rather than sit around and feel sad about it. I love that about the women in this film – they stick up for themselves, they tell it like it is, and they usually have the last word. 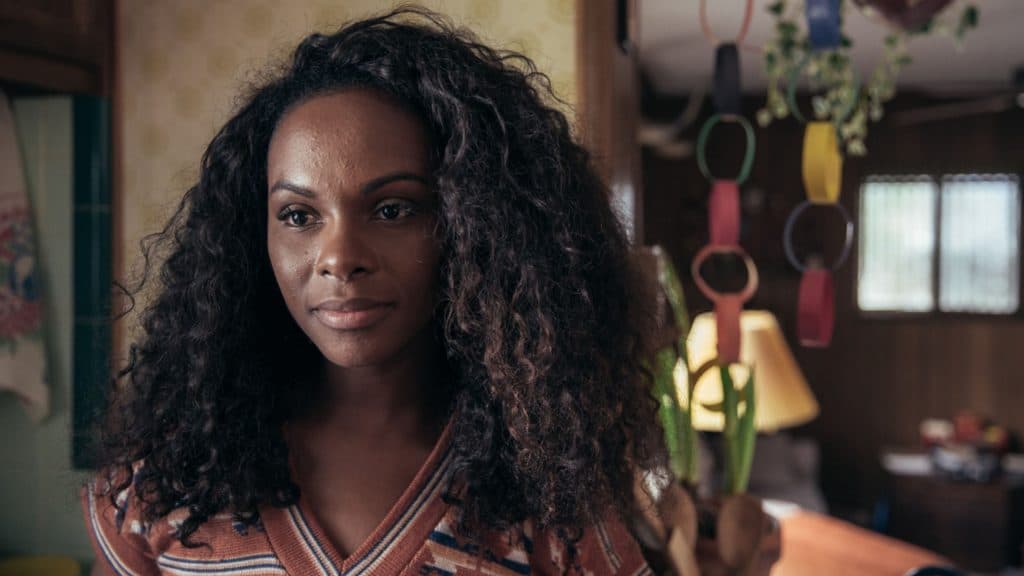 BT: And you got to be in a movie with the legendary Robert Redford and Sissy Spacek!

TS: Right?! I mean, when is this ever going to happen again?! I don’t even know if it will because it’s supposedly Bob’s last film. So the fact that I get to be a part of that? Then to get to be in a movie with Sissy Spacek – I grew up on Carrie and I watch her now in other things, and I mean these are just two icons! I’m just proud and happy that I was able to play a part in it.

BT: What was it like having them on set?

TS: Oh my God! As soon as I met Sissy, my homegirl, she was just so cool and welcoming and loving and gracious. Bob was the same way. He’s just gracious and sweet and kind – that’s what the set was, it was like family. It felt like home.

BT: You’re a producer too. You’ve got serious power!

TS: [giggles] You know, trying to get anything made is always a battle, but that’s just life. But that’s also part of the fun, and then you get to say that you did it. To have more say in what you do, especially when you’re a producer or creator on something, it’s pretty beautiful to have a seat at the table and knowing that your words matter and that you can be the difference. You have a say in who gets hired, whether it’s inclusivity or more women, you have a say. That’s important.

BT: What did you learn from your work as a producer (on Southside with You and the upcoming The Nomads) that you didn’t know before?

TS: Oh man! It’s an endurance event. You’ve really got to be passionate about the project because if you’re not, you’re never going to get it done or you’re never going to get it made. Some people have stuck with things for 10 years or, in my case, it happened to happen in two, which people couldn’t believe. I learned to persevere and that you gotta love the project. If you have any doubts about a project or not enough excitement? You just have to wake up every morning excited about that project. 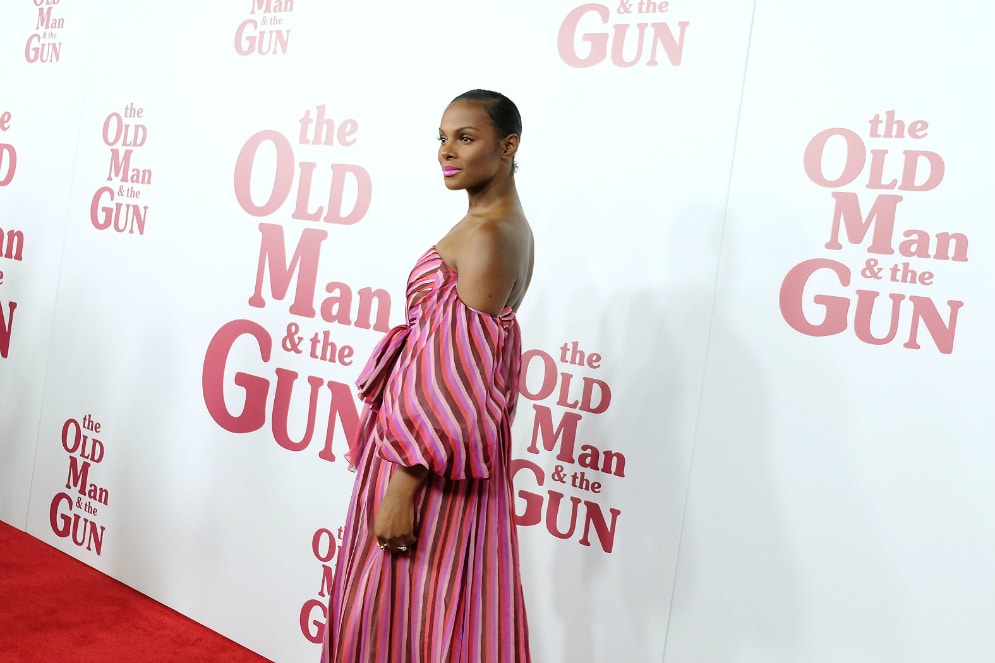 BT: Tell me about The Nomads.

TS: Oooh. I wanted to put a spotlight on teachers and then also on the Philly school system and how they closed all these schools, and how people were displaced. Also how when you take art and you take sports out of classrooms, it’s not helpful for the well roundedness of a person. It’s not just about math and English and all those things that are important, it’s about everything that matters that makes each human a whole person. Every person needs an outlet, whatever it may be. It’s a true story about these boys who have never touched a rugby ball ever in their lives, and they excelled at it and it turned a lot of their lives around. Sports and the arts are important.

BT: Which teachers have made an impact on your life?

TS: You know I was in one AP class and I was literally looking at this group of kids, because they were the smart kids, and I was like “why am I in this classroom?”. [giggles] I was an average student, I’m not going to lie. So I was like “I tested in AP English?”. Kids believe what you help them believe. So because I was in this class, my standards for myself not only went up, but I felt empowered to speak. My teacher, I don’t remember his name, he’s probably retired by now, but he made me feel like what I had to say mattered, like whatever I had to say wasn’t dumb. He liked when we debated about things and it sparked something in me and made me love English. Then I had this one social studies teacher, that’s where I really found my voice. Whether we were debating or talking about history or whatnot, I love history now. I’m obsessed with history and it’s because of that class and it’s because of that teacher. I found my voice in those two classes.

BT: Who are some of your personal heroes?

TS: My Mom is one of my heroes – her perseverance. My grandma too. She passed away but just her story about how hard it was during her time and how she couldn’t get hired because of the colour of her skin, but she continued to go and fight for her family. Those are my two biggest personal heroes. In the industry, as a whole, Ava DuVernay, Oprah and the women who are trying to direct and trying to produce and speaking out. Our voices are being validated now and I think the recent movement makes me feel validated and make me feel like being who I am is enough. Sissy Spacek is also inspiring to me. The fact that she’s had this career for so long and she’s still going strong, you know? That’s a hero to me. Cicely Tyson too. She’s 90-something years old and she’s seen everything in this industry, and it wasn’t always beautiful. The roles at that time weren’t what she wanted them to be, I’m sure, but the fact that she paved the way? I stand on her shoulders because of everything she’s endured. I’m able to do what I want because of her.

BT: Who do you still aspire to work with?

TS: So many! Chris Pine, Bradley Cooper, Anne Hathaway, Daniel Kaluuya…Danielle Brooks and Laverne Cox – they’re so great on Orange is the New Black! I have so many people that I want to still work with. But I’m so grateful for the amount of talent that I’ve already had the chance to work with in my career. 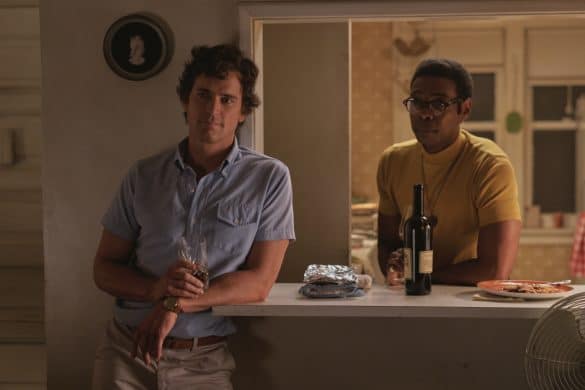