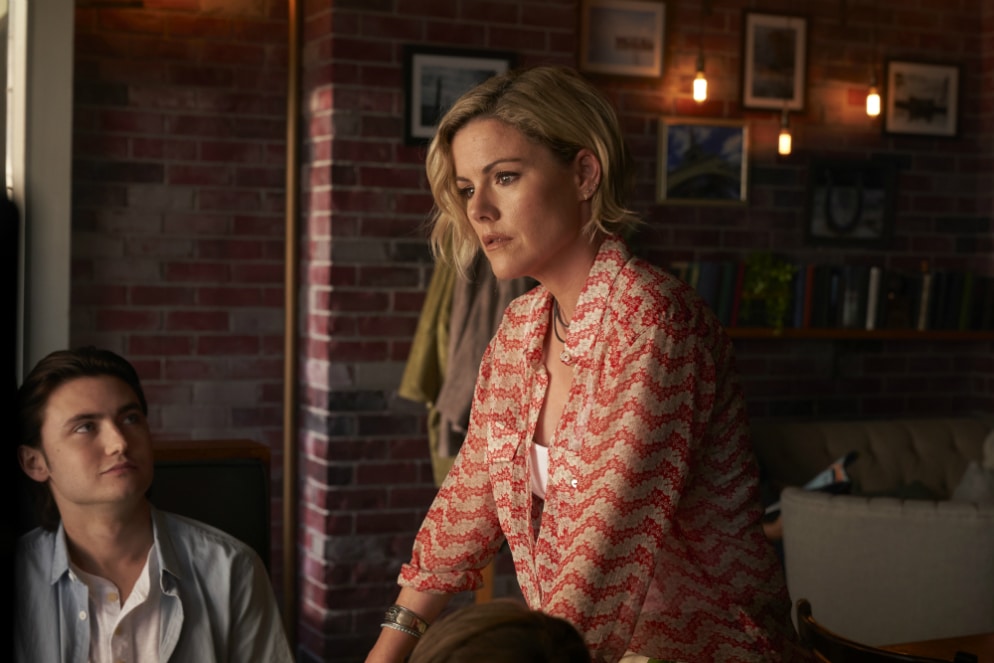 The series Northern Rescue is set to stream in its entirety on CBC Gem today, as well as on Netflix in the States. This interview was a particularly special experience as we visited the Northern Rescue set in Parry Sound in August and had the opportunity to speak to Kathleen Robertson in a unique setting: an artifical bakery called The Slice, a café in Turtle Bay. Brief Take, along with one other esteemed journalist, got to sit down and have a coffee with Kathleen Robertson (who plays Aunt Charlie), and she provided a lot of valuable information about the series, acting opposite Billy Baldwin, and about her progression into becoming a screenwriter.

Though we were meeting for the first time, we had an instant connection (or perhaps it was The Slice).

The following is a condensed and edited version of our on-set interview with Kathleen Robertson.

Brief Take: How was it working with Billy Baldwin on this show?

Kathleen Robertson: He’s great. I mean he’s a force and he has a very, very strong personality. And I have a strong personality as well [laughs] so we we’re a good team. And you never know what you’re getting into when you start a show. It’s like most of the shows I’ve done, you literally meet the person for which you are going to be spending every day in a parking lot, you know? It’s like “Oh hey, it’s nice to meet you, I’m going to play your wife or your sister or whatever”, so you never know, you just never know. You hope that you’re going to get along and you hope that it’s going to be a good, creative partnership, and sometimes it is and sometimes it just isn’t and you just make the best of it. Luckily, I think that Billy and I are a good team. So far, so good. 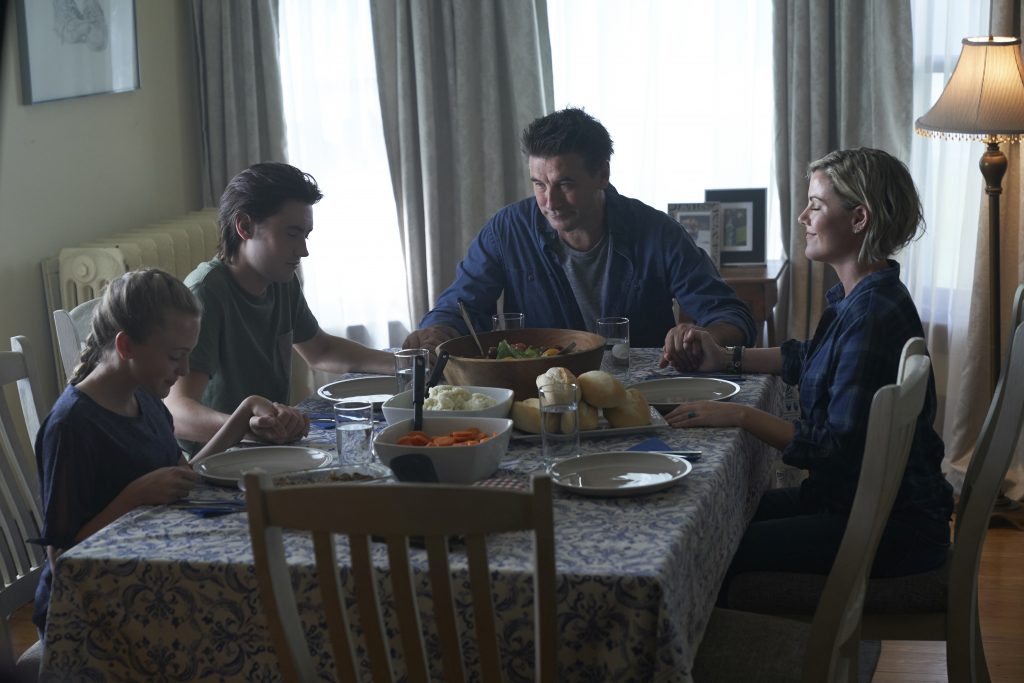 BT: Could you speak to moving to the writing side?

KR: It’s great, it’s so amazing. I have always said that I spent my entire life being in front of the camera and being looked at and being touched and prodded and powdered and I was like “my goal is to be in sweatpants with my glasses on and a laptop”, that’s the goal. [laughs[ And I’ve succeeded. I mean, I’m still acting, of course, but I don’t act as much any more because I am so busy on the writing front. So this job will sort of be a four month period for me but it’s sort of perfect because it really works out well for all the other stuff I’m doing. I would never do a 22 episode network show in which I have no life. It wouldn’t work in terms of balancing everything, so it’s been great.

I did this really interesting program through the Writers Guild in Los Angeles called the Showrunner Training Program that is kind of training us how to mentor people and be show runners and content creators. The most interesting thing about it for me was every show runner that came in would just talk about actors and how awful it is to have to deal with actors and how much they just are nightmares. And I just sat there in the back going [gasps] “Is this really about what people think when they think of actors?”. So at the end of the program, they were like “would you come up and speak to everybody about what it is to be an actor?”. It’s interesting. They couldn’t be more different from one another, you know? It’s been very eye-opening for me.

KR: As an actor, you can suck and they will tell you that you’re amazing and bring you a Diet Coke with a straw. [laughs]

BT: And as a writer you can tell yourself that now.

BT: This show is a partnership between Netflix and CBC. How would you hope a viewer would watch Northern Rescue?

KR: It’s definitely a streamable show, like it feels like you could definitely binge-watch this show. I believe that it’s being platformed on CBC online as the same time as it’s being shown, so I think they kind of want the ability to say “it’s your choice”, which is kind of what I think that everything’s moving now. It’s sort of hard to watch shows every Sunday night at 8 o’clock, so now everybody has the ability to watch when they can.

#northernrescue now available to binge on @netflix in US and @cbcgem in Canada. Get a box of Kleenex xo https://t.co/SKDampZZCL

BT: How do you watch?

KR: I don’t even watch television. I only watch Netflix or Hulu or Amazon or HBO, or I never would watch a network.

BT: What was your favourite role that you’ve ever played?

KR: I think that it was Boss. I played in a series called Boss with Kelsey Grammer. Gus Van Sant was the director on it and that was the best role I have gotten ever. It was literally kind of everything. It was a woman who was super [laughs] super complicated and presented as one thing, and behind closed doors was completely different. [laughs] Every script I would get on that would just be better than the next. It was just a dream role and it was really challenging, so that was the high water mark for me as an actor so far.

BT: Going back to your writing pursuits, can you talk a little about what you’re currently working on in that regard?

KR: There is a dream project right now that I am trying to get off the ground and nobody wants to make it. [laughs] I don’t want to say what it is, but there’s something that I am really obsessed with making and it’s a true story about a woman in the 90’s. And it’s very sexual and very provocative and everybody’s terrified right now about doing anything revolving around women and having true sexuality because of the MeToo movement and because of everything that has gone on in Hollywood. It’s a really weird time as a writer, as a female writer, because women can only be portrayed right at this particular moment in time in a purely positive light. So to see where everything is going to go, I’m curious. I’m writing a movie right now based on a book called Little Bee for Julia Roberts, that’s a dream project for me. It’s a beautiful book and I’m writing that for Amazon Studios. And I’m writing a movie for Jason Reitman that is based on a book called The Possibilities, that’s for Fox Searchlight. That’s a beautiful book as well—it’s the same author who wrote The Descendants, the Alexander Payne / George Clooney movie. That is the follow-up book, so I’m hoping that I don’t mess that up. We’ll see. I’m also writing a movie called Lady Killer, which is based on the Dark Horse comic book series about a female assassin in the 1950’s. So that’s cool—for Michelle McLaren, the director Michelle MacLaren, who’s actually a Canadian director, but she did Game of Thrones, Westworld, she’s a massive, amazing director. She was originally going to do Wonder Woman. So yeah, I’m writing that for her right now.

BT: To what degree should content be responding to culture?

KR: I have a thing where I write in my office and it’s just a piece of paper and it says on it “It has to matter”, and that’s my line. That’s my thing which I always go to, which, as a writer, the work that I do has to matter or else I don’t do it. There’s only so many hours in a day and this is it, this is our only life, so I want to at least attempt to create stuff that matters or that at least touches people a little bit, or that makes somebody see life a little bit differently or makes us feel less alone. That’s my mission statement—to create stuff that makes you feel less alone.