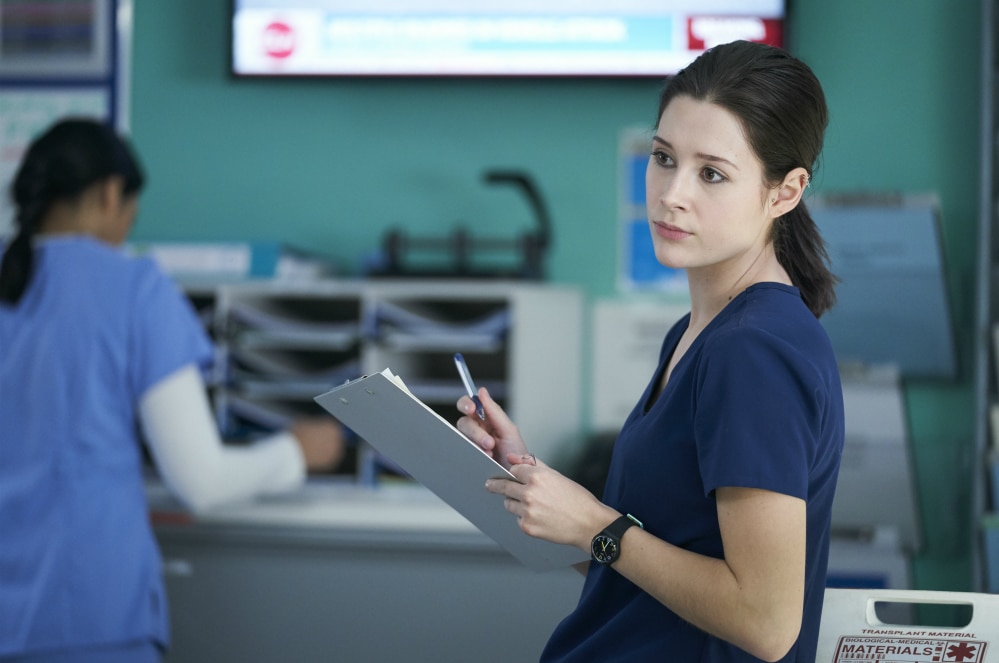 Actress Natasha Calis gave us a particularly memorable interview during our Nurses set visit a few months ago. As we discovered over the course of our sit-down chat, Calis pursued her character, Ashley Collins, with a vengeance, and also formed an incredibly strong bond with co-star Tiera Skovbye. In addition, we learned that there may have been cosmic forces at play that led Calis to the series and to be interviewed by us as well.

The following is an edited and condensed version of an on set conversation with the refreshing Natasha Calis.

Brief Take: You wrote in the press notes this is a touchstone project for you along with your role in The Possession.

NC: Yes, I was possessed in The Possession.

NC: Oh, did you see it? Amazing! Cool. The dinner table when I was chowin’, you know what’s pretty impressive? I didn’t have a spit bucket and I must have eaten, I had eight burgers that day. And I was a happy camper, it was amazing. It was the best day of my life. I can’t remember the last time that I wanted a role as badly as I wanted this one. The casting process is quite the long haul and I do my tapings with my Mom, she is my reader. And I remember having five or six tapings because I kept having to do callbacks and they would add more scenes, and the more callbacks I got, the more I wanted it. I get quite obsessed with my tapings and I kept tweaking the littlest parts and nuances and my mom was saying: “Natasha, I think that you’re getting so obsessive”, and I was like “Mom!” and tensions were flying a little bit and we were yelling at each other, and she was like: “Enough! You have enough on your tapes, you’re fine” and I was like: “Mom! When I get this, it’s all going to be worth it”, and she was like: “Okay, fair enough, let’s go again” and it was worth it. 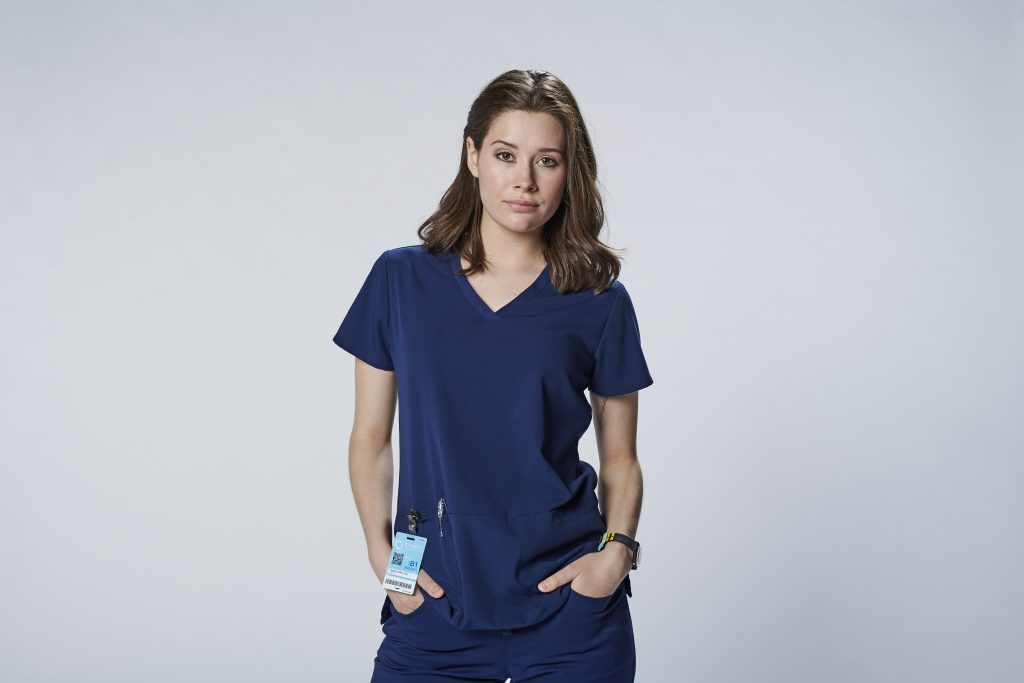 BT: Now that you’re taping episode 8, I hear that there are serious upcoming twists.

NC: Oooh, what have you heard? Fill me in, tell me! Yeah, we’re actually all biting our nails off, we’re so curious. [laughs] One of our favourite things to do on set is to gather around in our chairs, like “What do you think is going to happen?”, “Well, this is my theory”, and we throw out all of these different plot twists, like they’re just absurd. One of them is that a character gets hit by a bus…our theories are out of this world. But it’s really fun and it’s a fun game to play. Who can come up with the craziest plot twist or cliffhanger for the season finale?

BT: What tools do you tap into to play this character?

NC: There’s this really interesting physicality with her that I’ve never gotten a chance to experiment with for a character because I think that she’s the most different from me than any other character that I’ve played. She’s very polar opposite to me in almost every single way- her sexuality, her childhood, the way that she grew up, her life experience and her life thus far has been so different from mine, so there’s definitely this physicality that I brought to her that’s been really fun for me to embody. I change the way that she walks, and she kind of has this swagger and toughness but also this massive vulnerability about her at the same time. I kind of think of it that she’s wearing a mask to everybody on the outside world and only to the few select people that she lets into her life, she takes off the mask, and it’s kind of interesting for me to play that and to experiment. 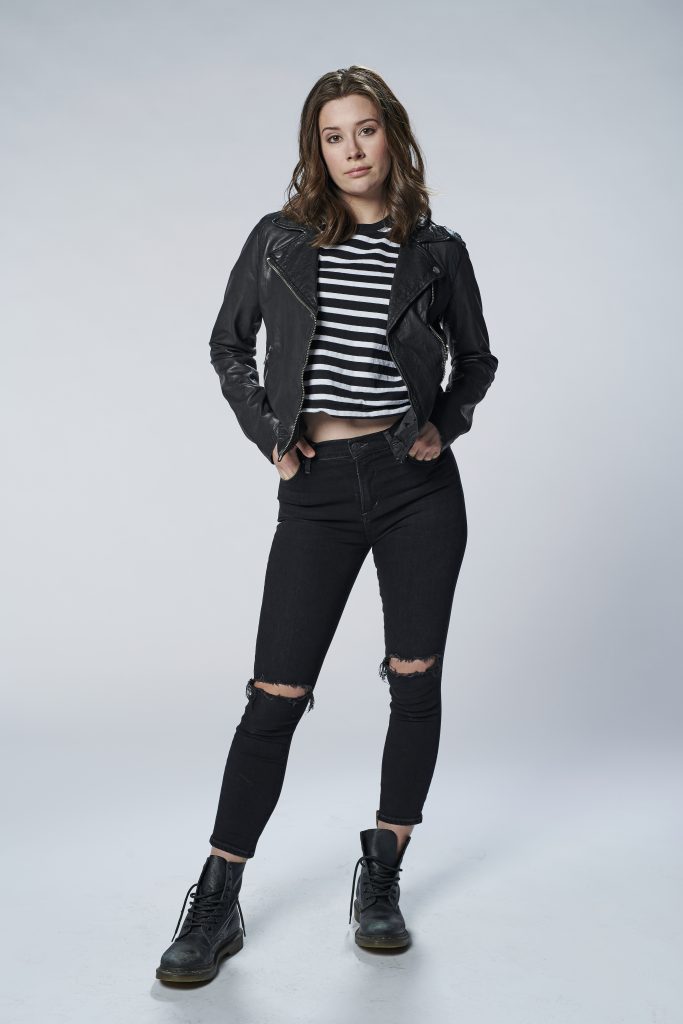 BT: What do you like best about filming in Toronto, especially being from Vancouver?

NC: I really, really love Toronto. It’s definitely my home away from home because I’ve lived here before, so I was really excited. I would have preferred it filming here than in Vancouver because I get to go away from home, play this different person, have this different life, live all of this…and then I get to go home and be Natasha again, start playing soccer again and do the West Coast thing. It helps me out a lot, I think, kind of removing myself from my actual reality and playing this special character, and then I can fly back and be Natasha again. On the plane ride here, I had this book that I got specifically for Ashley, well actually, the first plane ride here it was for the chemistry read, because they flew us in for the chemistry read and I know that I keep saying this, but I was so obsessed with this character and establishing her and building her and coming up with all of these ideas. I literally bought an Ashley journal, and on the plane, I was as Ashley journalling and building all of these thought…I don’t know, it’s hard to explain, but I have this book full of Ashley’s thoughts and I use that from time to time to look back on things and discover different emotions and all of this stuff. [chuckles] So I have an Ashley bag that I brought here, when I actually found out that I would be getting it and that I got the role, my next plane ride was to come here and relocate and start filming and there were whole different experiences written in the journals.

BT: Tell me about collaborating with Tiera on your characters’ dynamic.

NC: It starts off Ashley and Grace hating each other and we get off on the wrong foot and Ashley hates Grace and there’s this weird tension, and it was really funny for us filming because we’re best friends – we hang out before set, after set, in between – we’re inseparable. And it was kind of funny playing characters that hate each other because automatically, we’d show up to filming and we’d all be in a group and kind of naturally we’d be joined at the hip and standing beside each other or hooking arms, and then I’d be like: “Wait a second, our characters hate each other”, and then we’d go to opposite ends of the line [laughs], the five of us, we’d have to remember that: “Maybe we wouldn’t sit beside each other, that we’d sit the furthest away from each other”. So it was kind of funny trying to remember that and separating Tash and Tiera versus Ash and Grace. We really get along. We really enjoy each other’s company. I do really respect her, I do. 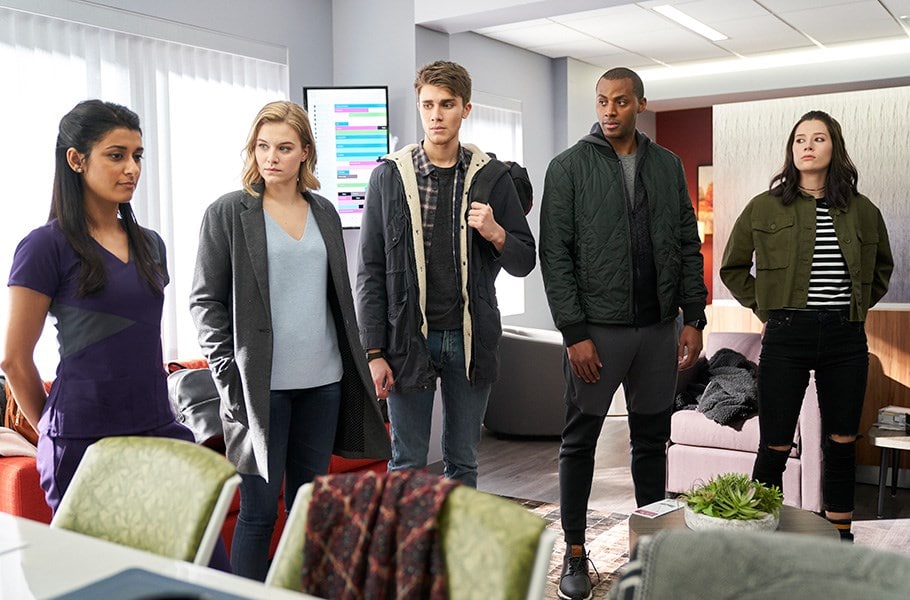 BT: Did the two of you happen to know each other prior to filming?

NC: We met during the chemistry read because we’re both from Vancouver, and oddly enough we’d never met each other in Vancouver and never seen each other or interacted or anything, so we flew out together for the chemistry read and then got to know each other from there. We were texting each other after the chem read, like: “How did the others do? How do you feel? Have you heard anything?”. And then a few weeks later, “have you heard, have you heard? What did your agent say?”. We were totally rooting for each other. When I found out that she got the role, because she found out before me, I texted her a blonde nurse emoji and a brunette nurse emoji and that’s all I said, and she said “Oh my God! Did you get it?” I was like: “Yeah, we’re going to be nurses!”. I’ve never had the universe speak to me as loudly as it did, guiding me to this show. The universe lit up this path with Nurses at the end of it, and it gave me all of these signs and it kept leading me to Nurses. Flying home from the chemistry read, I was between two nurses on the plane ride. I told them, “I’m an actor. I just auditioned for a nurse role”. Is this is a sign? My lucky number is 651, and my flight confirmation for the chemistry read, they were like: “Oh, here’s your confirmation number for Air Canada”, by the way, I picked the flight I wanted, they gave me a list of sites and I was like: “Oh, I’m going to do this one”, and they booked and they were like: “We’re going to send you the confirmation code”, and it was 651, and I was like: “This is a sign”. And after the chemistry read, Tiera went out shopping and I had to go to the airport right away and she sent me a picture and she’s like: “This is so weird”, and it was a picture of a necklace with two nurse charms on it, it was an old school nurse’s cap with like the T and then a syringe. There were just so many signs that we fell into this together. It was really really interesting and it hadn’t before happened to me.