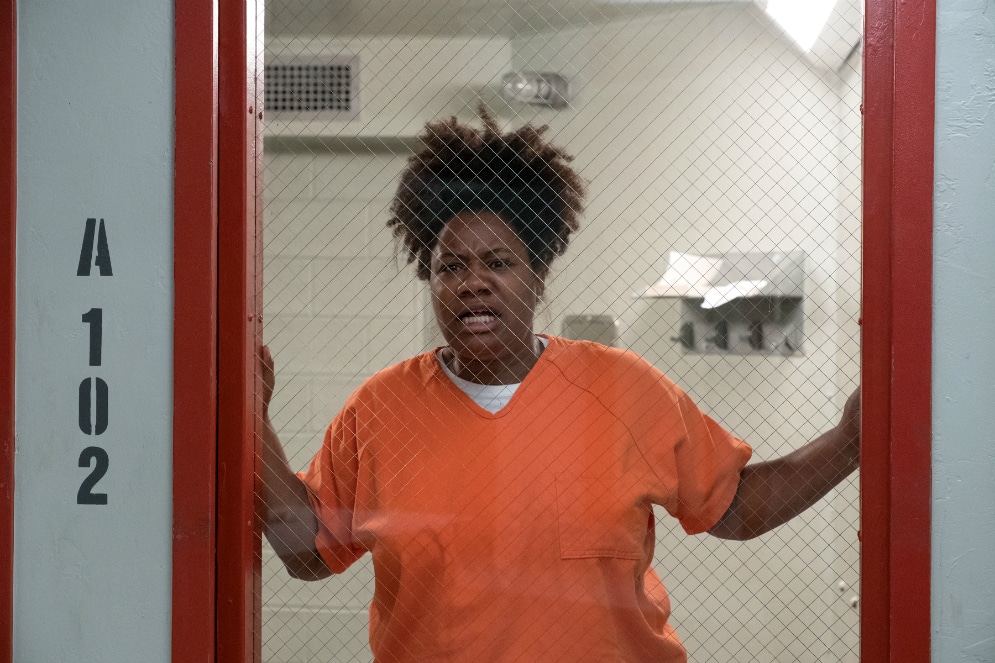 You may know Adrienne C. Moore from having some of the best lines on Orange is the New Black. On the hit Netflix Original show she plays Cindy (or, as she’s affectionately known, ‘Black Cindy’), who quickly became our favourite character in the third season where she converts to Judaism. Well, as we discover in our exclusive interview with Moore, the plotline started out as a joke and then came to be a fully realized character arc, all because of a single take that was a joke and becomes real. All of this and more came to light in a spirited phone interview (where, frankly, we could have spent all day joking with the talented actress).

Here is a condensed and edited version of our interview with the charmingly loquacious Adrienne C. Moore.

Brief Take: How did you feel about playing Cindy in the crossover episode of Unbreakable Kimmy Schmidt?

Adrienne C. Moore: I mean, I feel kind of shocked at that moment. I’ve been a fan of Tina Fey’s for a long time. I mean obviously SNL, but I really started to hear her voice when she created 30 Rock. I remember that they were in the last season of 30 Rock and I was just praying and praying and praying that I could be a part of the last season. Here’s an interesting story: the day that I went to go film my first episode of 30 Rock, was the day that I got my first script for Orange is the New Black. So I was literally preparing for my first audition for Orange is the New Black as I was sitting in my dressing room of 30 Rock!

I remember being so amazed, like “Oh my God, I’m about to go do a scene with Tina Fey!”, and I was so excited. And then when she brought me back, again, for that same season, but a different character, I was at a loss for words, as I am now. It was such a small scene in that first 30 Rock episode, so for her to even remember that and to remember me? [chuckles] I remember the second time, when I went back to shoot that scene, everyone was saying “Tina was showing us that video on her phone of your audition”, and I was like, “I’m in Tina’s phone?”. [laughs] I mean, I couldn’t believe it, I was in her phone!

Then, quite naturally, when I got the call to come to an episode of Kimmy Schmidt, which I was already a fan of, it was just another moment of “I cannot believe this is happening!”. I’m still praying for that day, ever since I first worked with Tina Fey on 30 Rock. She is the best friend in my head. I know Amy Poehler is her girl, but she’s still the best friend in my head and she’s still my girl. [laughs] 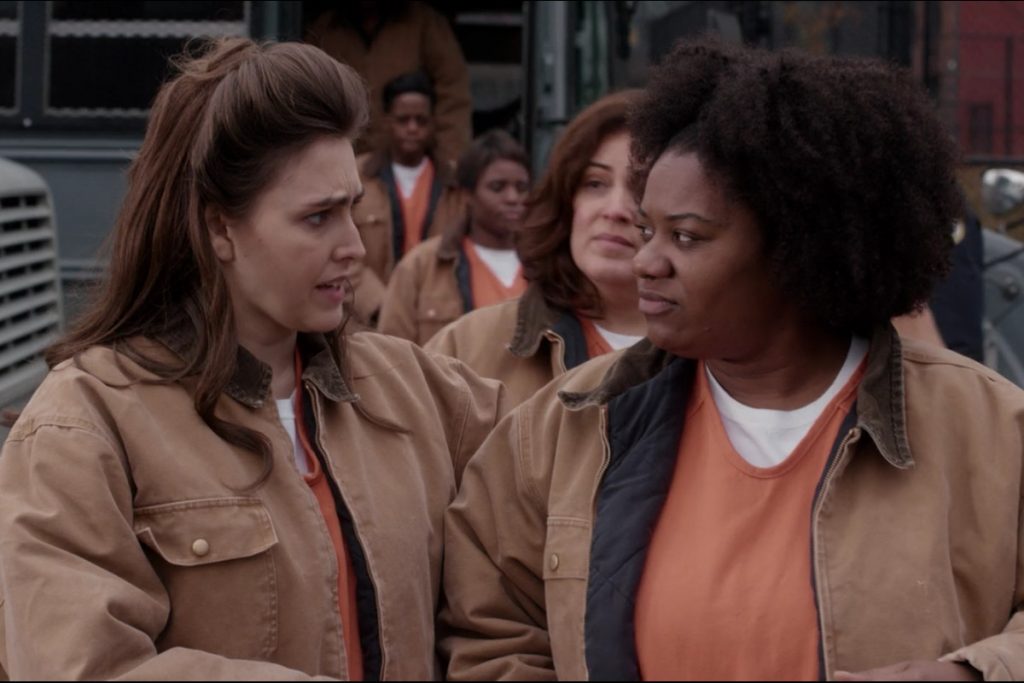 BT: What was the chemistry first like between you and your co-star Danielle Brooks?

ACM: Yeah, Danielle and I, we had met each other a few months before she had even gotten Orange, at an audition, ironically, and she remembered me from a musical that she went to see that a friend of hers was in, that I was in as well, I was playing an angel. We met then and we would see each other at different auditions. We were like “hey I see you!”, and we had gone out to dinner and just kind of talked about the business and being new in the business, dreaming out loud. When I booked Orange and I told her that I was coming on the show, she welcomed me with open arms. She introduced me to all the people, sort of paved the way for me and told everybody that I was cool. [laughs] So when I got to set, everyone was like “okay, I was told that you were cool, you can come hang out with us.” [laughs] It was an easy transition, to say the least. 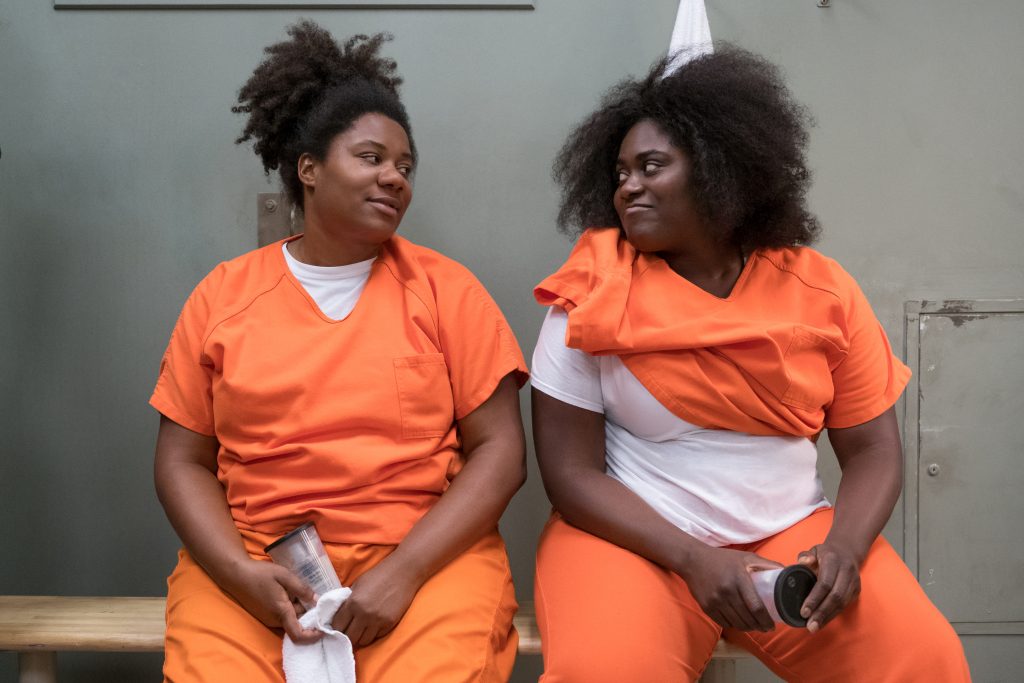 BT: What best prepared you for playing Tova טוֹבָה?

ACM: Well, a lot of things. I’m a big believer that art imitates life and vice versa, and I think my whole life has been preparation for taking on her conversion scene. As a kid growing up, I was entrenched in church. Almost every single day of the week, there was a Bible study, or a choir rehearsal, and I even took martial arts, tae kwon do, at church. I was sort of reared that way. I always had this interest in faith, religion and belief, and what makes a sinner and what makes a saint, and always wanting to be a good person and making sure that I’m following the rules. Then when I went to Northwestern, I was involved in our campus ministry. I sang choir at the local church that I went to and I got involved in our gospel choir on campus. So being around all of that sort of got me in this spiritual mood and tone. I took a religion course and I ended up loving it, and so I just kept taking courses and before I realized it, I had enough credits to declare it as a course of study. And so I have always been interested in that and in philosophy as well. When I graduated and I went on to grad school a few years later, and then a few years later into acting, I would always end up in a play that would have religious undertones to it. I should say that they found me. I played angels. I played these sort of these ethereal figures. Interestingly enough, while I was filming Season 3 of Orange, I was doing a play called Ethel Sings, which is about Ethel and Julius Rosenberg, and their whole plight with Communism or not Communism and just being citizens here in America, then being executed. I played an angel in that play. It’s interesting how religion and spirituality have sort of followed me. So even when I was a struggling actor in New York, I babysat for a lot of Jewish families, so I was always going to different events within the Jewish community, so I fit right into it. 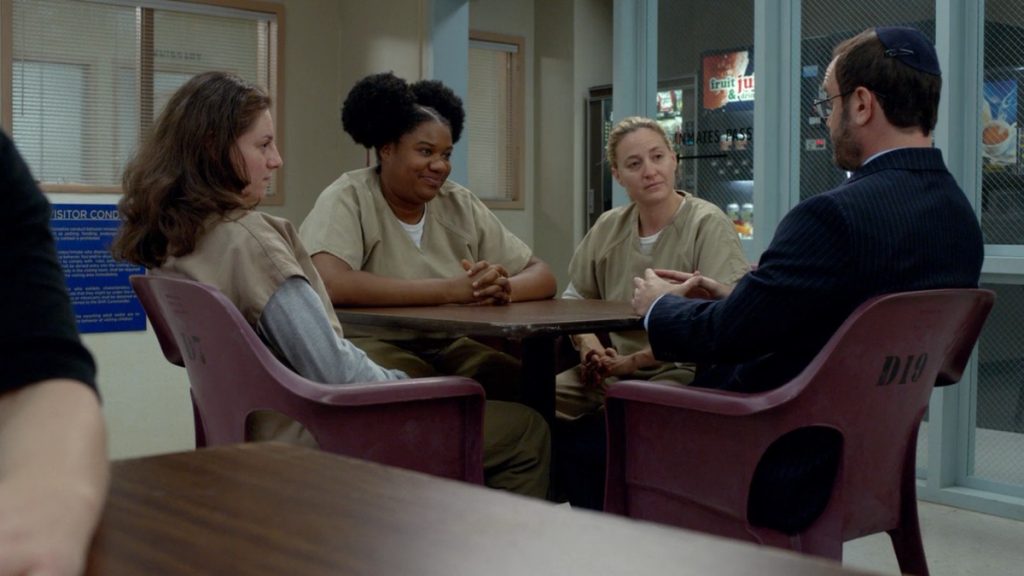 Honestly, when they made her journey a conversion journey, which was, if you remember, it was supposed to be a joke at first, that she wanted to have good food, you know? The interesting thing is that between me and Cindy, we love ourselves a good meal, so while it started out as a joke, it became this sort of serious religious, spiritual experience for her. It honestly felt like it blended so seamlessly into the natural fabric of my own life and what my experiences were. Even that conversion scene, in which she is talking to the Rabbi, I remember, like most things with Cindy, you expect some level of comedy and humour. So the first few times I had done a few takes of that scene I had done it in a serious way, and then interestingly enough, as the camera shots got closer and closer, and then saying the lines over and over again, it struck a very serious chord in me, that moment. So as a person who has always been taught from my acting coaches to be truthful in moments and to not deny my true feelings, it was a very spiritual moment for me, and I sort of saw my childhood. I kept saying those lines over and over again and I literally saw myself as a kid, sitting in church being like “oh, I want to be a saint. I don’t want to be a bad person. How many prayers do I have to say, and what do I have to do before God to be a good person?”, and it sort of brought me back to that memory. I was honest with my feelings in that moment and it came out as it came out. I remember after the take, the video village, which was outside in the other room in the hallway, they just starting applauding. And I really thought it was something else that had gone on outside that somebody had done that they were clapping to. [laughs] So when the director came in and he was teary-eyed, I was like “wait, y’all are clapping for me?”, so it was a very natural moment. I think that everyone watching that take connected to that feeling of “I want to be a better person, but I also feel like I’m struggling to be a better person”. 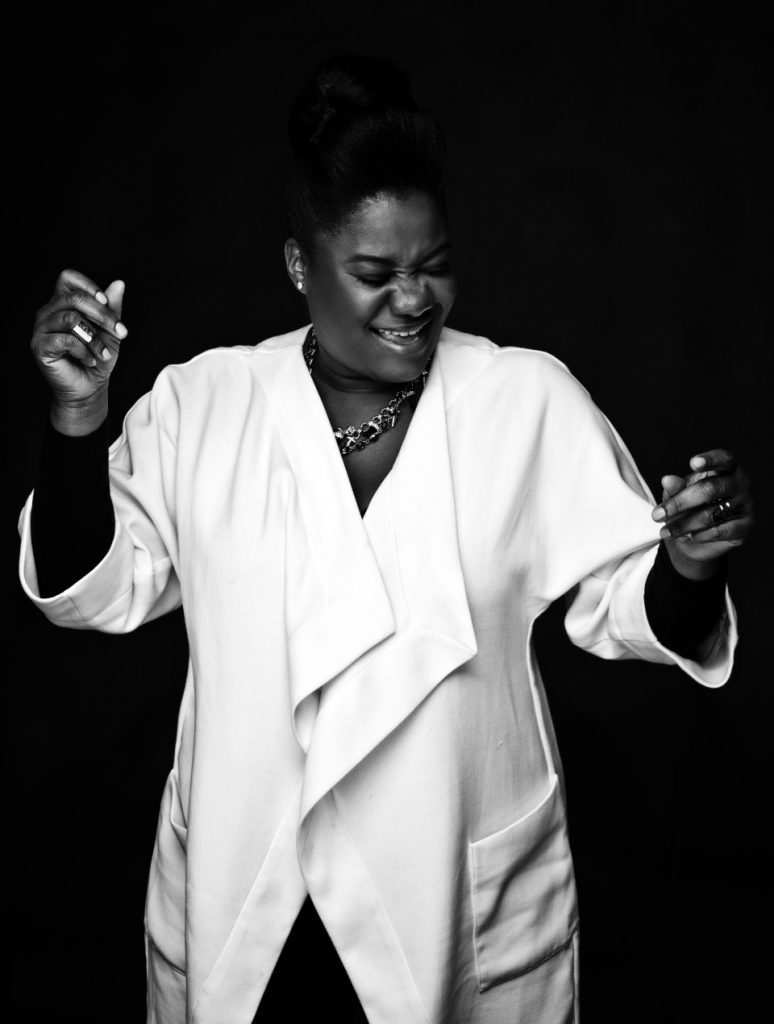