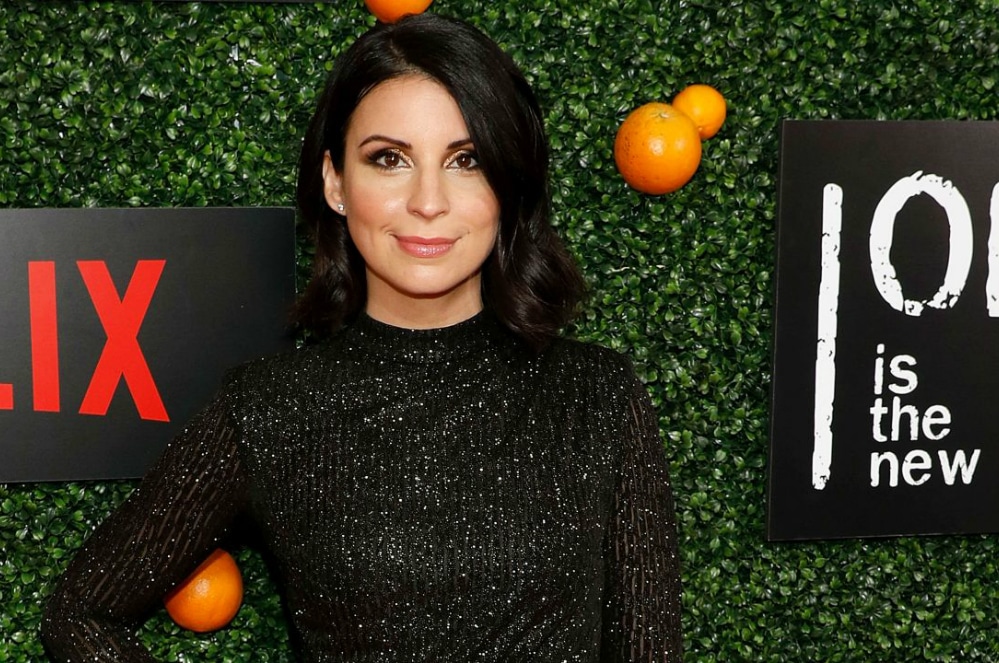 Beth Dover is legitimately one of the funniest people that I have spoken to in a while, and I had difficulty transcribing our interview because I kept laughing over all of her lines. I actually opened the interview by telling her that I had spoken recently to another former cast member of Orange is the New Black, Lauren Lapkus  (Dover was a guest on her podcast).

My interview with Beth Dover actually took place on the day that Trump announced that he was ending DACA, which really informed the tone of the interview. Also, this was about a month before the show was set to air, so Dover hadn’t even seen the new season and didn’t know what she could say about it, so she was delightfully cagey but still had some really interesting anecdotes. She makes a wonderful foil and is perfect for the role of Linda.

The following is an edited and condensed version of our interview with the hilarious Beth Dover.

Brief Take: Before you joined Orange is the New Black, did you binge watch the series?

Beth Dover: Absolutely! I was binge watching just like everybody else. I was a giant fan of the show! And what’s interesting is when I auditioned for the show, I put myself on tape. I live in Los Angeles, so I thought I would be in one episode in Season 3. And it turned into this whole big thing! It’s been such a gift. I mean, I flew myself out, I was like “yes, I’m obsessed with this show, I’ll fly myself out to do four lines!”. And the fact that I get to be on it now is so fantastic, I can’t even tell you. It’s a dream.

BT: What did you think of this past season?

BD: Last season was interesting because it took place over the course of three days, which is a departure from what we normally do. Some people responded really well to it, some people were confused by it, but I thought it was strong, really, and it was great. I think that I can say our next season won’t be that. I loved it because everything was so heightened the whole time. I really loved it. But people love the show and I think that you’re in for a good upcoming season and you won’t be disappointed.

BT: Did you try to sequester yourself on set because your character Linda is a bit of an authority figure?

BD: The first week I was there, it’s like the first day of school. Because I hadn’t met a lot of these guys, so for me, it was kind of like a freshman coming into school for the first time kind of vibe. But then I got to know everyone and yeah! I hang out a lot with Lea DeLaria and Emma (Myles), Emily Tarver and I are very close, Julie Lake, Kimiko (Glenn)… all those guys. Everyone! Everyone’s awesome, truly. (She is also very close with new cast member Vicci Martinez, but because Daddy hadn’t been announced yet, she kept this info quite secret and I was impressed by her resolve). 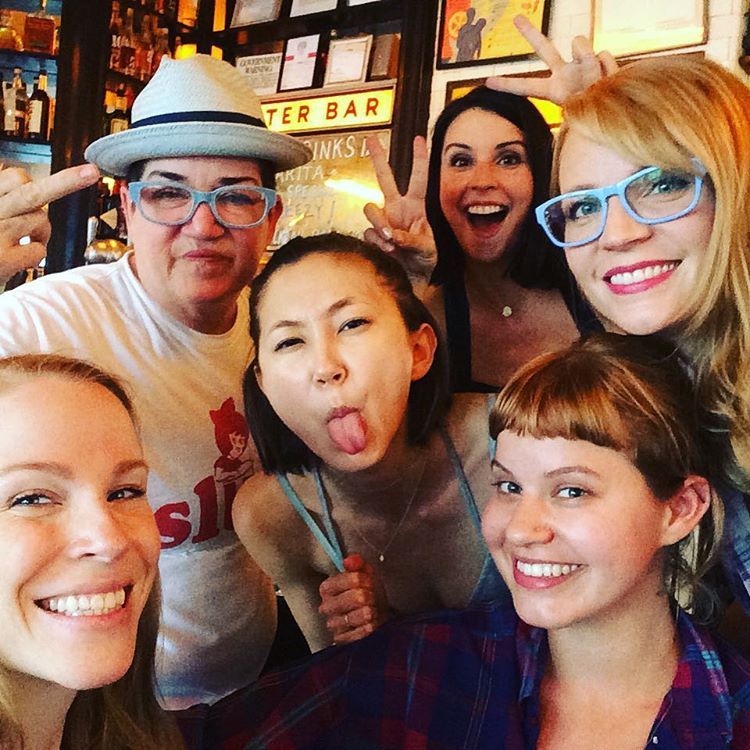 BT: And that cliffhanger is so ominous, what’s going to be become of Linda?

BD: I can say that we pick up a week after…that happens. You’ll see where we all are at that point. I mean, I want to tell you. [giggles]

BT: What’s on your playlist right now? Your Hamilton video was SO good!

Beth Dover: So one of my friends is playing a Schuyler sister in Hamilton right now, and I just saw her in Vegas. I went with my friend Emily Tarver from the show, who I just mentioned, it was her birthday. My friend is Ta’Rea Campbell, and then I saw her in Costa Mesa, so I’m following her around like the Grateful Dead! I’ve seen it four or five times now, Hamilton. I have a Hamilton [*emphasizes*] p-rob-lem. I love it! I love it so much! And you know, I took some time off from it and now it’s back on my playlist, all the time. Dear Evan Hansen, I’m a nerdy showtune person. But I will be seeing the Indigo Girls in San Luis Obipso this weekend. [laughs] So that’s on the playlist right now, too, because I’m about to see them. I like showtunes and chicks with guitars. I like anything nineties, nineties rap, I like all of that. [laughs]

I've just been told the song didn't go through. Here's part two where I sing a song from Hamilton quite terribly at 6:30 in the morning. Please enjoy. And donate!!! @realleadelaria and @emilytarver your turn! Link in bio #ham4all #immigrantswegetthejobdone

BT: And this relates to your charity work, like The Big Slick at Kaufman Stadium.

BD: Yeah, The Big Slick was started by these five guys, a few guys you’d know, Paul Rudd, David Koechner, Sudeikis, Rob Riggle, all these really great guys, Eric Stonestreet. They’re all from Kansas City and they started this charity called The Big Slick, and it’s for Children’s Mercy Hospital. It’s so wonderful to be a part of it, I’ve got to say, every year, I’ve only gone twice, my husband’s gone six times, but I can’t wait to go next year. We raised over two million dollars this year and just to see the kids, I don’t know, it’s just wonderful.

It’s really a great thing, especially right now, when you feel so helpless, it just feels good to be like “hey, I did something for children that’s good” and I can’t handle it, about these children.  I’m just sick to my stomach and you know, I don’t know what to do. I’ve been giving money and I’m doing this thing called the Comfort Campaign, my kid and I are writing cards and giving teddy bears to these kids. It’s not that I’m uber political, it’s just that Trump got elected and I felt just a call to do that. It coincided with me having a baby and it was that the world became bigger for me, it wasn’t…I’m just one person, but I try to do the best that I can every day.

BT: The show really does reflect the new reality.

BD: That’s what so great about being on the show –  it really is such a timely show and it confronts real world issues. I just feel really grateful to be a part of it, and that’s honestly what I say. Being around activist women has really inspired me so much to be a part of it. I want to give voice to whatever I can, in my little way, so yeah being a part of the show has definitely made me so political, for sure. 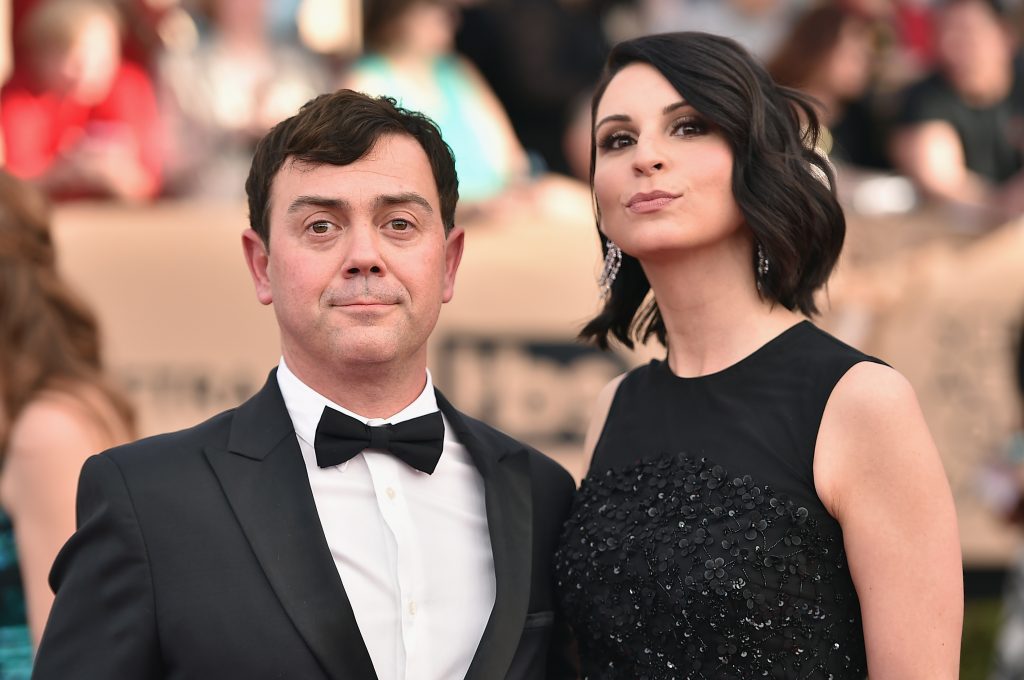 BT: Quick shoutout to Brooklyn Nine-Nine being renewed by NBC, another show that speaks to the time.

BD: Wasn’t that a crazy story, for my husband (Joe Lo Truglio)?! We thought that it would be cancelled, and man, the uprising on Twitter was so great! They got another season and they’re moving to NBC, so that’s another cast that really gets along and are just lovely people. I adore them! I did one episode too. It might be a little bit of nepotism. [laughs] But it was fun. I love working with my husband on stuff! We got to work on Wet Hot American Summer, Brooklyn, we’ve gotten to work together on a few things, Burning Love, and he’s writing a film right now that hopefully I will starring in, and I can be in, and he’s going to direct and write, so that’s exciting.