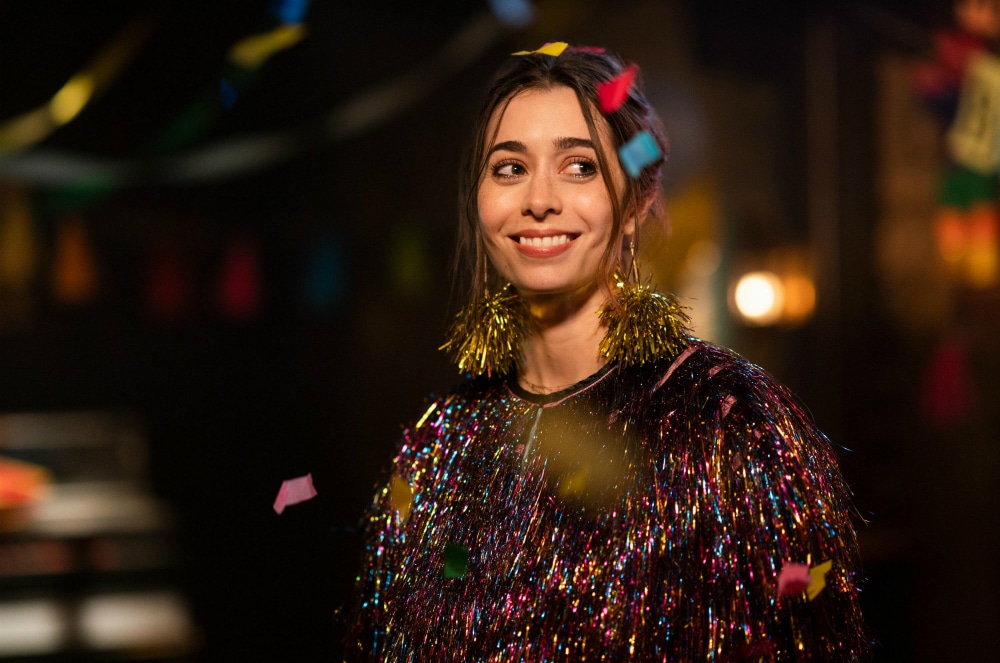 Having watched the inventive new film Palm Springs earlier in the year, I decided early on that there seemed to be very little more fun than spending an entire time loop with star Cristin Milioti, who not only shines as Sarah Wilder, but I’ve enjoyed in a number of additional projects as well. Though I expected a decent interview, I was nonetheless blown away by how charming, polite, and above all, relatable Cristin seemed to be, and just off the set of her newest TV series to boot.

The following is an edited and condensed version of a delightful phone conversation with the leading lady of a movie that constantly shifts our expectations, Cristin Milioti of Palm Springs (which is now streaming on Prime Video Canada).

Brief Take: Hi, Cristin! OK, before we start talking about Palm Springs, I do want to say that as a fan of the book of Made For Love, I’m so happy and relieved that you are playing Hazel.

CM: Oh my goodness. Ohh, that’s so wonderful to hear! I hope that you enjoy it. Thank you.

BT: I’m very late in saying this as well, but I thought that you were really good in Year of the Carnivore.

CM: Oh gosh. I was talking about this with someone else earlier this evening. That film holds such a special place in my heart. It was my first ever movie! I’d done little things here and there, but (writer-director) Sook Yin-Lee took such a big gamble with me. No one knew who I was and she fought for me and put me as the lead of this really brilliant gem of a movie and I adore her. She holds a very special place in my heart, as does that film. Oh God, yes! That was such a wonderful experience because I had never, it was really spoiling. I felt like it was making a piece of art, a piece of theatre or something. Which, I had done a lot of Off-Broadway plays that no one had ever seen and I got to come up to Vancouver and it felt like being on the playground or something. We got to make this weird, sad, funny story about this girl and I got to…that experience, it holds a very golden place and I didn’t know that not everything could be like that. [laughs] BT: In terms of Palm Springs, is there a scene or moment which as an artist you are particularly proud?

CM: Oh my goodness! I gotta tell that it’s very rare for me to feel proud of my work. I struggle a lot to watch myself. But I will say the thing that I love doing in this film that I then was able to watch and be like: “Oh, this scene, I’m not like tearing my eyes out”. [laughs] That’s like the best to which I can get, is that I am not tearing my face off and crying blood over my performance, in this, is the montage, I watched it and I was like: “That turned out well”. And the campfire scene. It was one of my favourites. I love that scene a lot.

BT: I thought that moment added a lot of playfulness, especially within the montage.

CM: I know, and the reason that I bring it up is that in the campfire, we surprised Andy (Samberg) and caressed his face with a hook and we laughed so hard that they, and he said in interviews that they…and I never thought that it would make it in because I thought that it was too ridiculous. And then later in an interview that we both did together, he was like: “Oh no, we tried to put it in, because it was so weird and funny and we didn’t have any other angles on it” and…the hook used to make two appearances in the film.

BT: Do you have a favourite memory from filming or from your downtime on the set?

CM: In talking about Year of the Carnivore and saying: “I didn’t know that they wouldn’t all be like this”, you know, this is another project that really felt like kids on a playground. We worked really hard, this shoot was relentless, it was brutal and we had to shoot it so fast and in really uncomfortable positions, but it was just a ball. It was so collaborative, we all wanted to be there, working with Andy was a joy. I felt so passionate about this character and this story really delighted me and moved me, and I don’t know, it was all…I’m trying to think of specific things. It was Andy and me in the car, for days at a time and we were kind of running a dance sequence on the side of a desert road, or running lines while that car was being towed through the desert. Filming that campfire scene, I know that I keep talking about it, but that was our last night of filming. It was really beautiful to end on that, that was a joy. Like I have a lot of fond memories of performing that dance on the side of Whitewater River in the desert of L.A.

They saw us doing it so much that they were like: “We’re going to film that and we’re going to put it in the movie”, and there’s a quick pop of us rehearsing on the side of the road and that’s because that’s what we would do in between takes. It made it into the movie and there were a couple of other things that we stole. Like the tattoo scene, that was something that we were always joking about. And then one day they were like: “You can have two takes each, you can grab it at sunset” and then “Boom!” We have this incredible make-up artist, Galaxy San Juan, and she jumped in there with a homemade tattoo pen, like what you would make with the material that you had if you were stuck in a time loop. We stole that in 20 minutes, because we had been joking about it for days. BT: You are extremely good at finding that balance between comedy and drama, how do you go about doing that?

CM: Thank you. I really appreciate that. Thank you. Oh! I wanted to say it was a hard shoot. Listen, what I do for a living is such a joy, it’s never hard, I mean that like we shot that movie in 21 days. [chuckles] There wasn’t any downtime, it was just like a breakneck speed. But yeah, maybe that also the sort of madness of the film actually benefitted from that.

BT: In previous interviews, your co-stars say that they enjoy working with you very much. Who have you enjoyed working with that you’d like to work with again?

CM: Oh, goodness. Well, Andy (Samberg) for sure. The whole cast of Fargo. That was one in which…oh God, the whole cast of Black Mirror, I would do that one again. Every person in that show I felt like we were in a play that they were filming, like they built a spaceship and we were in a play about a spaceship. I would love to work with any of them again. Yeah, I’ve been very lucky. I’ve worked with a lot of people that I would jump at the chance to work with again.

BT: You’re currently working with Noma Dumezweni, who I really enjoyed speaking with at The Undoing junket. She’s amazing.

CM: Isn’t she incredible?! She’s so lovely and she’s just a human jewel. I just adore her and we met each other before Made for Love, actually, through John Tiffany. Because John Tiffany did Once and then he did Harry Potter. And we sang at a benefit for him and I was so excited when she signed up to do this, and we were just having coffee the other day, actually, after shooting. I adore her, I think that she is just…the best. The best there is. She’s so talented, it’s remarkable, her talent is first rate and then she has one of the kindest hearts. Her talent is first-rate. I’ll talk about Noma all day, I love Noma! She’s so easy with whom to talk, she’s so lovely. She’s so open-hearted and warm and it has been such a pleasure to get to work with her. BT: What have you watched and listened to recently that you enjoyed?

CM: Oooh, okay, what have I been into…? Well, OK. I’m watching The Crown right now, I just got into The Crown. Oh boy! I’ve been watching The Crown every night when I come home at night after filming Made for Love. Because I am out here filming…we have six days left on Made for Love. We’re about to wrap! And when I come home at night, I work on everything for the next day and then I unwind in front of The Crown because I think it’s astonishingly, wildly different from our show. And I’ve like ripped through seasons one and two and three and now I’m caught up, and now I am about four episodes into season four and my God, what?! It’s good!! Oh my good God, whew! I can’t look away, even when I am so exhausted, I’ll turn on one more episode, it is so astonishing. So good.

And I’m perpetually on sort of a Fiona Apple kick. What else? I’ve been on a real Fleetwood Mac, Stevie Nicks kick. I rewatched I Think You Should Leave, that sketch show on Netflix, that Tim Robinson show, which is so brilliant. Run, don’t walk to that one, it’s great. I’ve been diving into some old Arrested Developments. Yeah! And I’ve been listening to this artist a lot, Weyes Blood, and she’s incredible. I listen to her a lot. I listen to a lot of Mitski right now. God! You’ll love her. She’s great, also one of the best live performances that I have ever seen. Mitski, Weyes Blood, the newest Fiona Apple and then diving into older Fiona Apple, diving into early Fleetwood Mac. I’ve been listening to a lot of Kate Bush recently. Really, it gets very witchy over here. Yeah, it’s the best! That is the highest compliment for me. All the women in my life are all my witches, it’s like my coven. Yup! [laughs]

BT: It was great to talk with you, Cristin!

CM: You too, it was a pleasure to talk to you! 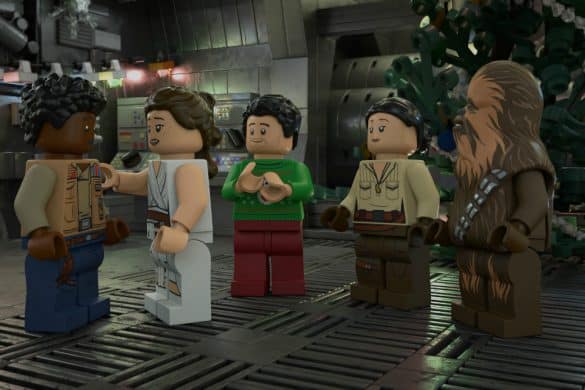