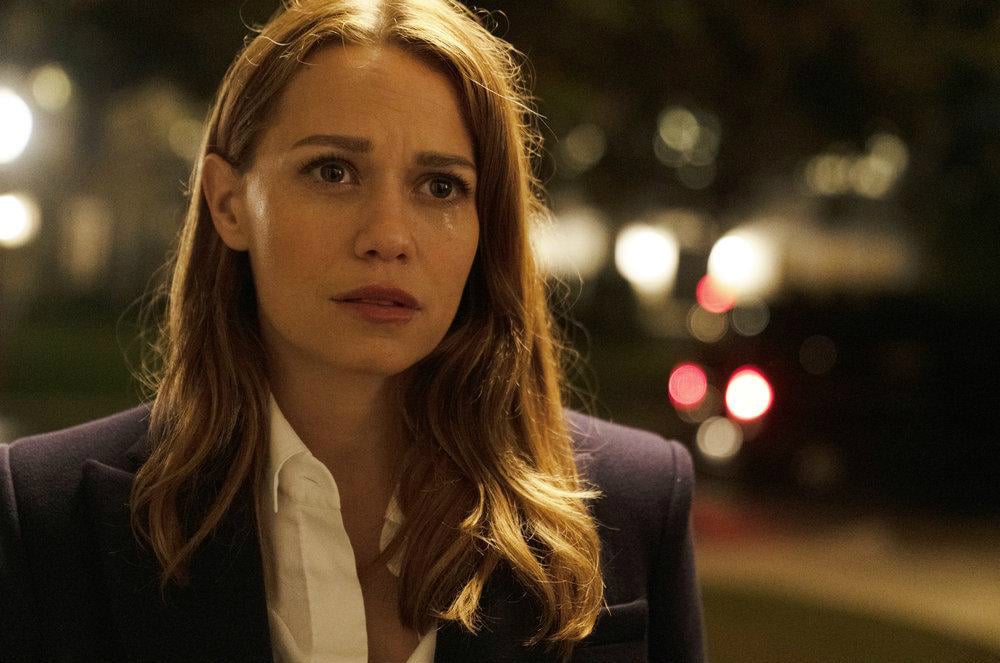 This was a special interview, folks. Bethany Joy Lenz is about honest as anyone we know, and we have been waiting in anticipation for her series Pearson to premiere for a long time. Brief Take was pretty thrilled to receive a first-hand account from an actress and performer we have long admired. Joy Lenz is tremendous in the Suits spinoff as Keri Allen, the city’s District Attorney and sort of unofficial right hand to the mayor, and the Chicago-set series is well worth watching (and female-driven!).

The following is a condensed and edited version of an extremely exclusive chat with candid Bethany Joy Lenz of Pearson.

Brief Take: What are you excited for the audience to see in the series and what sort of connection did you feel to Keri?

Bethany Joy Lenz: I’m really excited for people to see Gina Torres get to open up and explore- show you guys what she really can do. I know that on Suits that we saw so much of her, but it was really only in the office, and to be able to see her vulnerability outside of that space and her grit and resolve and what she is capable of as an actress is really exciting, so I’m excited for that.

How I connected with Keri was just… [chuckles] She’s so multidimensional and it’s rare to be given the opportunity to play a character that is written with so many layers, especially in an ensemble cast, when it’s easy to make everybody almost caricatures of what they should be, and I love that in this instance. It’s great to see everyone have so many very real, relatable human layers. It feels like it’s more about the different characters and falling in love with who these people are and what they’re facing and to whom they are relating, the dilemmas that we all face on a regular basis and in different ways, and it’s more about that than it is the story being central and the characters revolving around the story, you know? 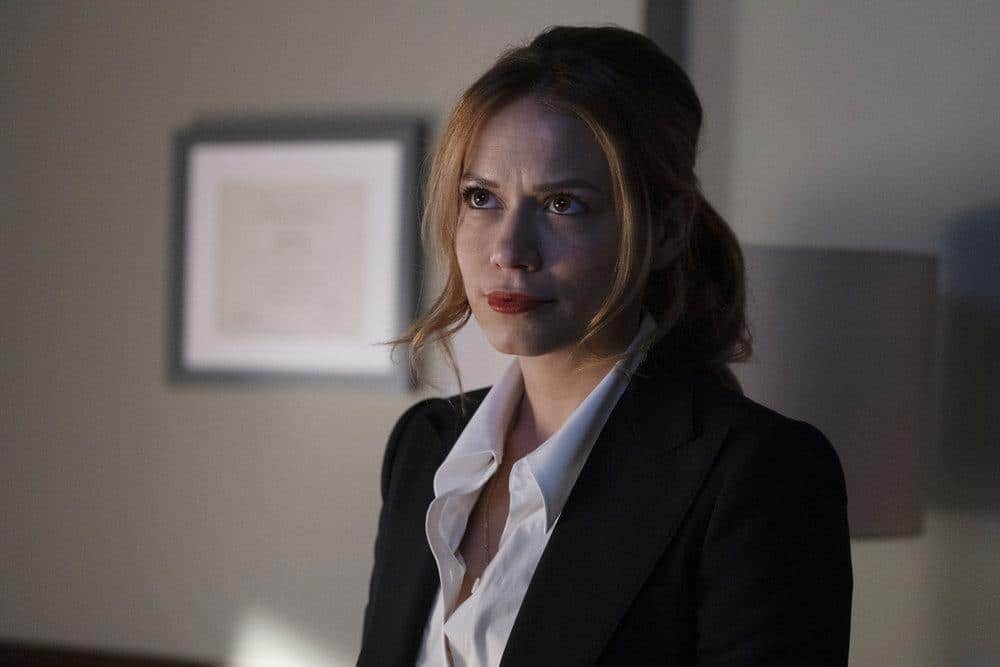 BT: Your series goes in fascinating directions, and your character seems to be set up initially as the antagonist to Gina Torres’ Jessica Pearson. What was that like for you?

BJL: Fun! First of all, we get along great and she’s such a gangbusters actress. She’s so fun and exceptional and we have a really great time working together. She’s the kind of person that you can throw anything at and she will react and throw something right back at you, if we’re playing. And yes, we’re going to see how their relationship changes and develops, but Keri is the antagonist, or one of the antagonists at the beginning, and with good reason! Jessica ‘s kind of thrown into her world, with very little regard for [laughs] everything Keri has set up and the delicate balance that she’s been juggling in the world of politics and ethics and all of her relationships. It’s fun to play somebody that is sort of grouchy and bossy and not used to taking shit from anybody. 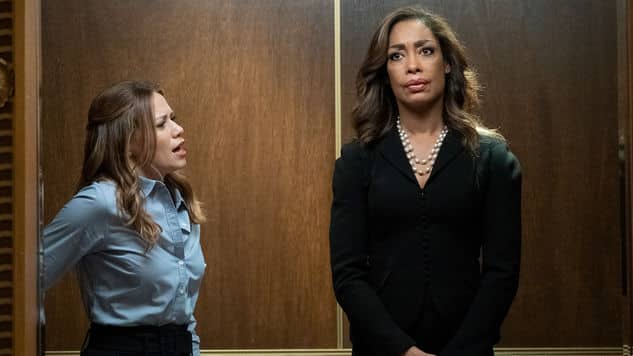 BT: You were a series regular on One Tree Hill for nine years and this is your first time as a series regular since then. What did you take from your experiences guesting on other sets in the interim ?

BJL: Every time that I come to a set or a new job, everything that I’ve learned on the job before always comes with me, and sometimes you’re learning about etiquette on set, sometimes you’re learning about acting from another actor, sometimes you’re learning about the way that the camera moves and how not to waste time. [laughs] So we learn all kinds of things, and certainly it was great to be able to step outside of the One Tree Hill world, just that crew and that group, and experience what it’s like on lots of different sets – the way other people function in different ways and the same ways. What went down on One Tree Hill, you age and mature and start to empathize with people more and understand a little more that…I don’t know, I guess that everybody’s there to do a job and at the end of the day, everybody has a family to go home to. When we get older, we tend to look at the world a little differently, and I’m sure that’s coloured my experience on Pearson.

BT: What type of research did you do for this series in terms of the legal aspects?

BJL: In terms of research, I kept asking before the show started: “What do I need to learn, what do I need to be doing?” and Dan Arkin kept saying: “Just be Keri. Don’t worry about it, just be Keri”. [laughs] I was like: “Okay…” So I’m just going to [raises pitch of voice] show up and trust my instincts, and I guess that’s what they wanted me to do. So there wasn’t a lot of research to be done because I’m not seen inside a courtroom a lot, I’m not saying a lot of legal words that I needed to memorize. I love talking to lawyers, but I’ve been around lawyers often enough that I have a general sense of what’s going on. I think that if I have anything in the script that I don’t know, I go find out. 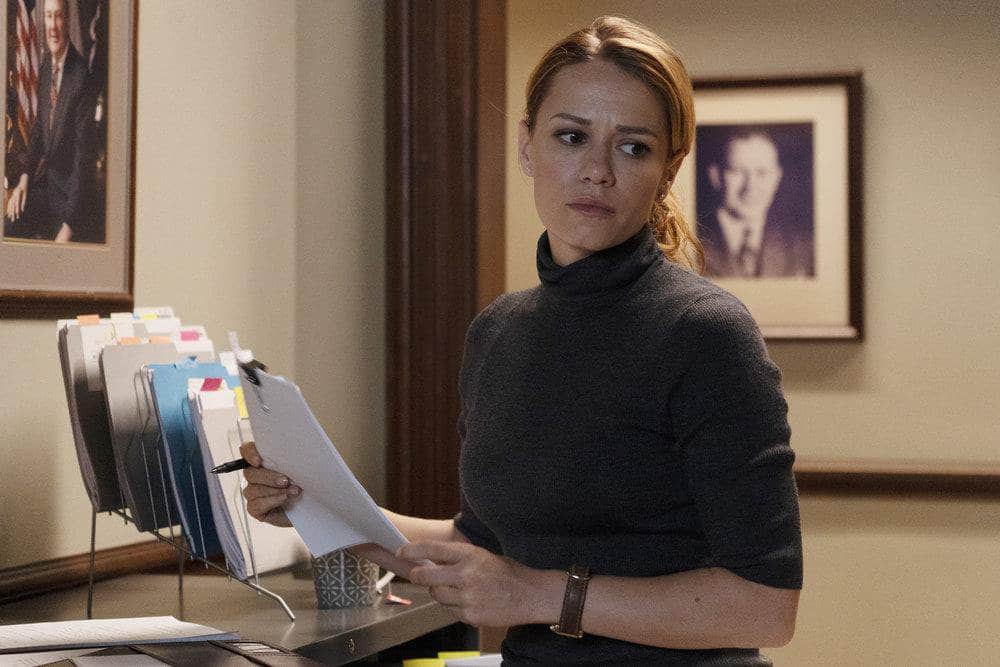 BT: Many shots in the series are filmed from underneath or the side. How did it feel to be filmed in this manner?

BJL: I loved so many of the directors on our show. I loved the way that they all had a cohesive vision and it felt like they really gave actors the time and space we needed to explore these moments. Once I saw the way that it was cut together, I loved the way it was shot, I feel like it created a sense of tension and anticipation. There’s a lot of stuff in which you feel like you’re a fly on the wall and you feel like you’re in the room, but you don’t feel like you should be, and I think that’s a huge part of the tone of the show and probably what makes it a lot different from Suits.

BT: Do you consider your pursuits like singing, jewelry design, and writing intertwined or separate from performing?

BJL: That’s a good question. I’ve been trying to figure out how to do that for a long time [laughs] with all of it. Writing happened…if it happened in this experience, it’s in my trailer. That’s the closest it comes to connecting the two, but I don’t know, I just took a really long trip with my daughter to Europe and we spent a good bit of time on a farm in Austria and afterwards we went to stay with some friends in London. And a friend of mine, who’s an actress, she doesn’t have a side hustle. She’s an actress and a Mom and a wife and has a show, and being out on the farm with her and spending some time with her and her family, it really reset me. [chuckles] It made me think about what it is that I have been prioritizing and how many things I try to juggle and for what purpose. So the question you’re asking me is timely, and I don’t think is something I’m thinking about consciously or a lot, I’m really focused on the things I want to focus on that make me happy. [laughs]

BT: Will you be live tweeting to the episodes?

BJL: I don’t tend to be on social media while I’m watching because it’s really hard for me to multitask. I don’t want to discourage people from getting on social media and talking about our show, but it’s not really meant to be watched on your phone or while you’re having so much else going on because much of the writing is giving the audience the benefit of the doubt, if they’re paying attention, to see what’s going on between the lines and to pick up on the subtleties of what the actors are putting down. So I feel like it’s important for people to know that this show is not a ‘have it on the background kind of show’, it’s something in which you’ll fall in love with these characters, you’ll be drawn into this world if you’re really paying attention. You get to think while you’re watching, it’s not just candy TV, you really get to be a part of the process.

I do enjoy interacting with fans, it’s fun to see their reactions, and I would absolutely encourage them to watch the show and then get all over their Twitter accounts and say hi. [giggles]

BT: Tell me about having a fan base that have come with you into this project?

BJL: I feel really lucky. It’s been amazing to have fans that have stuck by and that are still interested and still want to see me working. The only reason I work is because people want to see me working. [laughs] If they didn’t, then I wouldn’t work any more. I’m really grateful to have the jobs that I’ve had and the people who feel connected to the characters that I play or my work or whatever it is that is drawing them. I’m really grateful, and I hope that they fall in love with Keri like I have.

BT: What’s something that excites you coming into this series within the industry?

BJL: I’m always excited about realistic storytelling and I think that it’s interesting that everybody’s been binge-watching for so long. I’m wondering if we’re kind of coming out of that fad and if people are getting ready to spend time with quality entertainment again. We have spent so much time with, as I say, candy or brainless entertainment, and it’s not that there’s not a place for that, but it’s interesting, I have a little brother who’s 17 and he never watches TV, he’s watched movies like Back to the Future and Jurassic Park, it’s retro now.

But yeah, he doesn’t watch TV really at all, so I’m going to experience how the industry is going to change in that regard, and I’m hoping that our show is one of those things that we put out and it connects with people and is something that is really worth sitting down and spending time with. 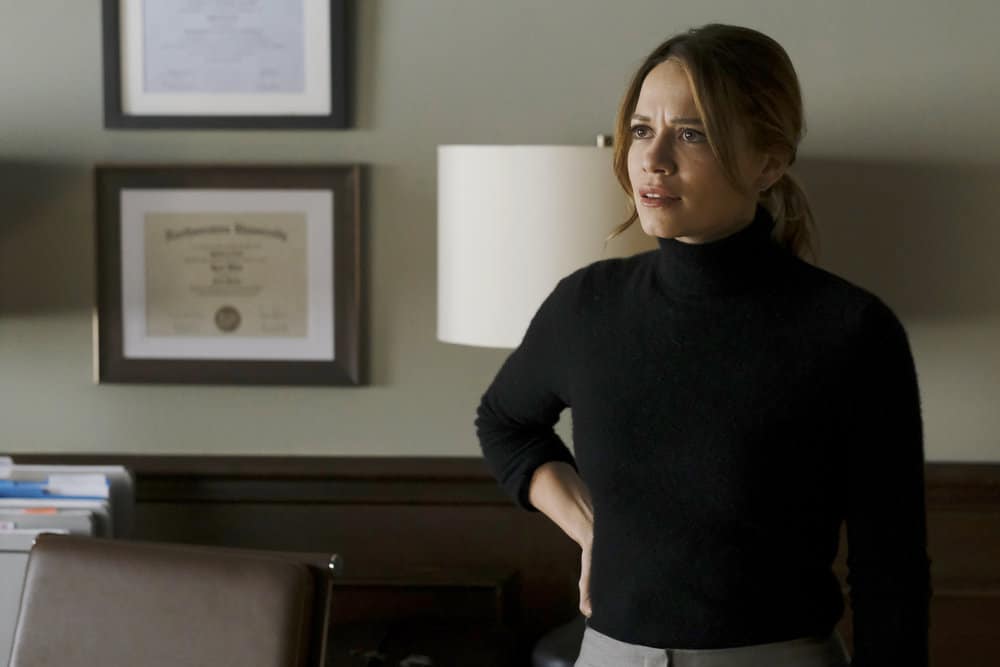 BT: So the week to week aspect helps to build up the character development and the plot reflects that.

BJL: Thank you, yeah. You’re going to want to think about the characters in your mind and talk about it at the water cooler and come up with your theories, and then watch next week and do the same thing all over again, pay attention, watch it with friends, and use it as a chance to connect with the people around you. The topics that we bring up will give you the chance to think about what is happening in our country. Enjoy the experience, don’t get distracted by your other gadgets and things. Be there, be present, and you’ll have a great experience.