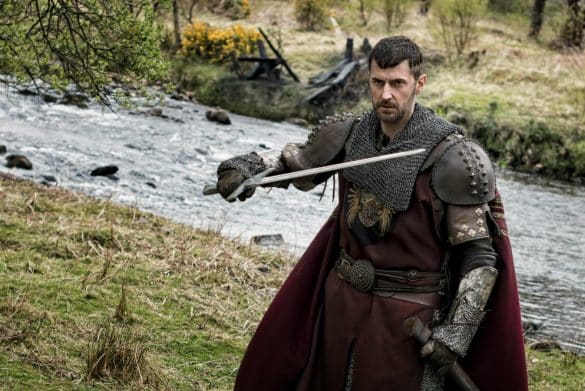 We’ve been fans of Richard Armitage for a number of years. We began our interview with the esteemed actor by mentioning how much we enjoyed his performance as The Great Red Dragon in Hannibal. He responded by saying that he loved the Toronto crew and would happily come back to the city, and as well enjoyed his experience shooting in Vancouver. We spoke by phone as he was in Berlin doing A&R work on his upcoming show Berlin Station, and we talked about his role as Raymond, a French soldier in the complex and fascinating film Pilgrimage.

Here is an edited and condensed version of our conversation with Richard Armitage.

Brief Take: Your character in Pilgrimage has a lot of humanity.

Richard Armitage: Yes, because he was so committed to his cause, and his belief in that cause was very real. Actually, it was very political at the time, this idea of Crusaders, religious war, and what it took the machine behind it and the relevance of the iconography to fuel that machine. was part of Raymond’s thrust, I suppose. I guess you could describe him as a fanaticist. He was kind of single-mindedly committed to his future, and the future of his family, and the legacy of his family, which was pretty much de rigueur of the time, especially with the Normans.

Brief Take: You are a student of Norman history. Do you also look to historical figures and characters named Richard for inspiration?

RA: Yeah, as an Englishman, in primary school, we were taken to all the Norman castles, and shown how they were built. We learned about Norman culture through characters like Henry II, Eleanor of Aquitaine, the courts, Richard the Lionheart, the Crusades. I was a Crusader in primary school with a cardboard box making a horse around me, and making a little mini-movie about the Crusades, so it’s very much embedded in my education. What I didn’t realize at the time was it was about this mass occupation of the British Isles by the French Normans, a dominant invading force. It was a very powerful, masculine culture and the Crusades weren’t necessarily this historic adventure I thought that they were. So for me, this role was questioning that, and questioning the juxtaposition of a very violent war-mongering nation opposed to this rural, peaceful, spiritual community of Monks. I was very interested in that.

Brief Take: Also, the idea of a holy object being a rock is very interesting.

RA: It’s interesting, isn’t it, the notion of endowing something so valueless with such power and keeping it hidden and subversive, just the idea of it seeps into society. I look at a million things that we attach such importance to which drives us to really bloody deeds. It’s interesting, and everyone can find a sort of relevance to it.

Brief Take: You recently returned to the stage. Are there more productions you would like to undertake?

RA: Yes. Yes, and I have something that we’re going to do at the end of next year, with Yael Farber, who also directed The Crucible. We were going to tackle Greek, but we may handle some Shakespeare.

Brief Take: You’ll have to give us a hint. History? Tragedy? Maybe even a comedy?

Brief Take: What was your experience like working on Ocean’s Eight?

RA: I think that is due to come out next summer. Just such a brilliant franchise to be a part of, I loved the original movies, the three of them, and to get to work with Steven Soderbergh and that cast was extraordinary. I had many memorable nights. There was one night when we were doing a night shoot in the Metropolitan Museum of Art and we were in a back room filming, and there was Cate Blanchett, Sandra Bullock, Anne Hathaway, Rihanna, Helena Bonham-Carter, all sat in a room together singing songs and being silly. It was four in the morning, and I thought “Oh, this is one of those ‘pinch me’ moments”. It was a phenomenal shoot, and Gary Ross, the director was an amazing guy, really amazing, and that was an incredible experience.

Pilgrimage is currently available on iTunes and Blu-ray from Search Engine Films.