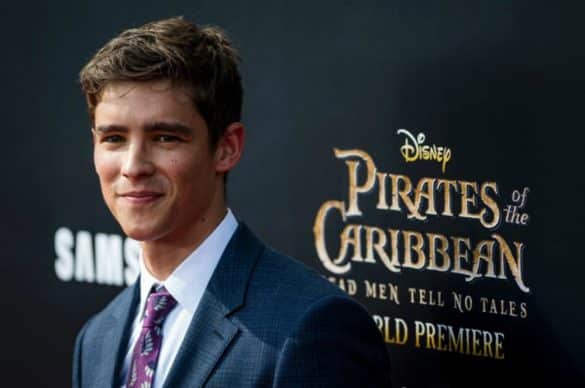 Suave Australian-born actor Brenton Thwaites is on the cusp on superstardom. Following supporting roles in The Giver, Occulus and the popular Australian soap opera Home and Away, Thwaites finally reaches leading man status in Disney’s Pirates of the Caribbean: Dead Men Tell No Tales. In the film he plays Henry Turner, who seeks out Captain Jack Sparrow (Johnny Depp) in the hopes that he can reverse the curse that’s bound Turner’s father, Will Turner (Orlando Bloom in a return to the franchise) to the sunken Flying Dutchman.

The day prior to the release of the film, we had the special opportunity to chat on the phone with the charming Brenton Thwaites about his role, working with Orlando Bloom and being a part of the Disney family. The following were the conversation highlights.

You’ve been on a journey with this film for three years now – from the production stage to the whirlwind promotional tour. What’s been your favorite part of the process?

Brenton Thwaites: Oh the principal photography was my favorite. Shooting in Australia was great because I got a warm welcome from my Mum.

Let’s talk about your onscreen Dad, Orlando Bloom. Did you get to bond with him before shooting your scenes together?

BT: We did for about five seconds. I had met him that day for the first time and then we shot the scene where our characters were coming together after being apart for so many years. It was a good thing that we hadn’t met each other though, you know? To have the estrangement. For the most part I was confused because there were so many emotions at play in the scene – the love, the longing, the frustration. We did it a bunch of different ways and you’ll have to tell me if it worked. I’ve seen the movie twice now and when you see the scene there’s the sense of the two being reunited. There is a fatherly-son love there.

And I loved your character’s dynamic with Kaya Scodelario’s Carina.

BT: Aww, Kaya is great. She has a great sense of humor. We play really well together and had a lot of fun. We started off having really strong scenes together, her character and mine. We butt heads and have a lot of conflict, but then after that there’s a little bit of slapstick and comedy. It was a lot of fun for her and I to play.

You’ve worked on a large star-driven, effects-laden Disney film before with Maleficent. What’s it like being a part of the Disney family?

BT: I think they’re really the masters of storytelling for a younger audience. Pirates of the Caribbean: Dead Men Tell No Tales, I think, is unique in the sense that it appeals to a wide range of ages. I just had a little girl and the opportunity to work with Disney and create movies for everyone is wonderful. Once she’s old enough I can show her Pirates 6, 7, 8, 9 and 10.

BT: Of course The Lion King. I love the songs in it.

I read that you received your best piece of advice from Ewan McGregor, who just voiced Lumiere in the live-action Beauty and the Beast film. I’m just curious what that advice was.

BT: Ewan’s got a really wonderful disposition about him. The way he treats the crew, the way he respects his directors and filmmakers, the way he treated me on Son of a Gun was inspirational. He took on the role of mentor because I basically had no idea what I was doing. Out of that he became a friend and someone I admire, watch and follow and really learn from.

Thank you so much for speaking with me and I wish you much luck in the future!

Win advance screening passes to The Book of Henry!