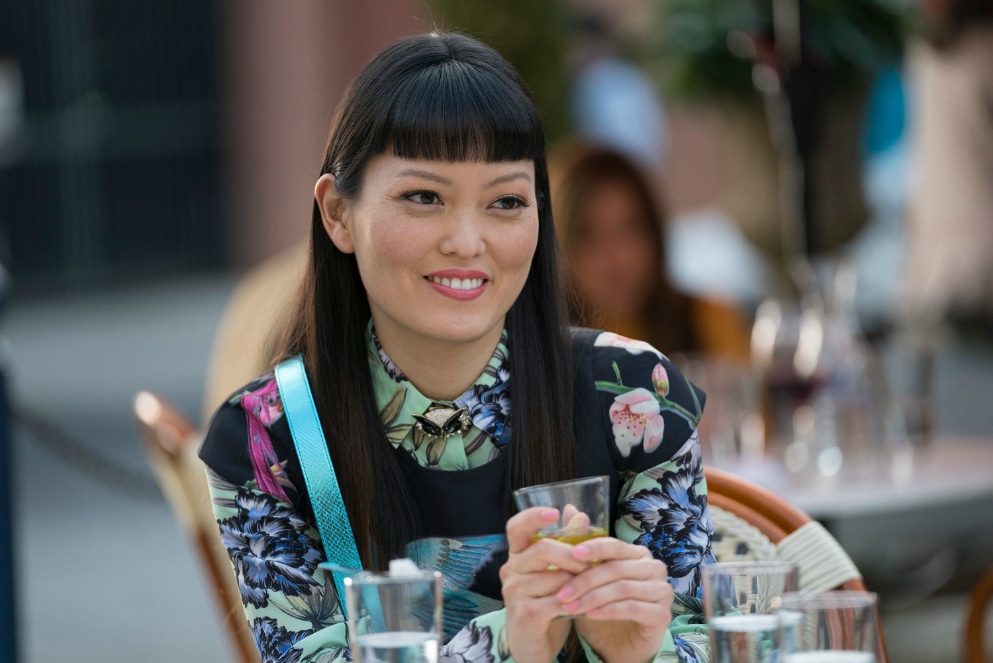 Ask any fan of the Pitch Perfect film trilogy, and they’ll tell you that Hana Mae Lee’s Lilly (or is it Esther? please debate) is one of their favourite characters from the films. Always ready with a (somewhat morbid but always funny) deadpan one-liner, she may not be the loudest Bella but she’s definitely the most hilarious.

A few days prior to the release of Pitch Perfect 3 on Blu-ray, I had the opportunity to chat with the immediately endearing and multi-talented Hana Mae Lee on the phone, where she spoke about her character’s biggest celebrity fan, the impact of working on a female-driven set and her favourite aspects of working on the Pitch Perfect trilogy.

The following is a condensed and edited version of our enchanting conversation.

Brief Take: Congratulations on the film! I’ve watched all three Pitch Perfect films several times, I have to admit.

BT: Your CV is crazy impressive. You’re a fashion designer, a jewelry designer, an actress, a singer, you’re your own stylist sometimes and even your own makeup artist sometimes. Is there anything you can’t do?!

HML: *giggles* Oh I suck at bowling. I think my highest score was a 76, maybe 96 once. I just can’t get the coordination! To be honest, a lot of the time I’m disappointed in myself because I don’t get to do everything I want to. I think, “this should have been done last year”, but I think it’s because I just love to sleep so much. I need at least seven hours. So everything always gets postponed and I get really bummed.

BT: Let’s talk about Pitch Perfect 3. Without giving away too much to my readers who haven’t seen it yet, your character FINALLY gets to speak at a normal level, she’s part of a big action sequence and she gets a really sweet love story. All of that must have been really fun to play.

HML: *giggles* Finally!! *laughs* I agree. She’s so fun and I was really excited that there was a love story for her and that she spoke. A lot of people from the first movie thought that I could speak at a normal level because in the pool scene everyone could hear me. But in the pool scene you could just hear everyone better because of the acoustics. But they cut a lot of that out so a lot of people were like, “wait, wait, wait, now you’re just speaking quietly in the next scene”. But no, it’s because in the pool you could just hear her because of the great sound! But yeah, it was fun to play and the explosion scene was the perfect reason why we got to finally hear her. I mean she was maybe a little demon possessed too, which was also really funny to play. I’m always wondering which character people would like better. Do people think that Esther is boring? Or, “man! Esther was so much better when she was possessed!” *laughs*

BT: Speaking of which, you have some hilarious one-liners in all three films. There’s of course your possession line from the third film, but when I spoke to some other die-hard Pitch Perfect fans, everybody differed on their favourite line of yours. Which one was your favourite?

HML: Oh, I was just going to say, what’s yours?

BT: Oh gosh, either “I ate my twin in the womb” or “I set fires to feel joy” from the first movie or the possession line from this movie.

HML: Oh yeah? That’s awesome! I think for me, my favourite line was “I was born with gills like a fish” from the first movie, only because I used to get made fun of in fifth grade. These boys would call me fish lips all the time and put their hands on their faces and do moving gills all the time. I had a really big upper lip though. But in the first movie, I do these movements with my mouth sometimes, just out of boredom, so that scene where I’m doing the lip movements, that was out of boredom as well. *laughs* But the line was already written in the script, the “I was born with gills like fish” line. It was there before I was even cast! So that line has a special place in my getting made fun of heart.

BT: I think my favourite part of any of the Pitch Perfect films are the big song and dance numbers. From the riff-offs to the finales, I just love them all. Out of all the songs from all three movies, which one was your favourite to rehearse and perform?

HML: Oh my God, once again it’s from the first movie. I grew up with so many of those songs. A lot of the girls hated ‘The Sign’ afterwards because we had to sing it so much. But I looooved it every time we sang it! It would just bring me back. I used to listen to Ace of Base all the time. I also used to listen to Montell Jordan, which was amazing because I got to meet him when we were promoting the second film. He was so nice. I thought he was a basketball player when I first met him because he’s like 6’7″, he’s so tall! But he was my music idol when I was growing up. But there were so many great songs in the first movie that were nostalgic for me and my years growing up, so I’m kind of biased towards the first movie. Every song just took me back.

BT: Did you get to meet any other artists as a result of performing their songs in the movies?

HML: Ooh, let me see. There was Montell Jordan, which was friggin’ awesome. Oh! Kesha! I got to work with Kesha on Jem and the Holograms and in the second movie we sing her song Timber. I was like, “Dude! We’re singing your song!”, and she said, “Wait, you are?”. *laughs* She was really cool.

BT: All three films have a huge fanbase, myself included. Have you been approached by anyone over the years who you were surprised was a fan of the films?

BT: YES! Tell me everything.

HML: We both work with the same makeup artist. Well he worked with me once and he was Janet Jackson’s makeup artist for a long time. He took me to her concert awhile back, I think in 2015, and he’s like, “You know Janet always talks about your character in the movie”, and I was like, shocked, “She watches the movie??”. And he’s like, “Yeah! Janet always talks about how your character is so much like her because everyone always tells her that they can’t hear her because she talks really quietly”, and I was like, “What?! Janet Jackson said that? Wow!”. *giggles* I told him that I’m going to tell everyone that she’s the reason why my character talks so quietly. Inspired by Janet Jackson. *laughs* So that was pretty cool.

BT: The Pitch Perfect trilogy is rare in that they’re all co-written by women, the final two films are both directed by women and they star & depict a diverse group of independent, strong women. What was it like working on those sets?

HML: It was definitely frickin’ cool and it’s weird because women, by nature, are pretty competitive. I mean men are too but I think men are more quiet about it. We always just want to do better and we’re always asking, “was that good?” or “do you want it funnier?”. I think having Elizabeth [Banks] and Trish [Sie], they always wanted to make it the best it could be and all the actors were like, “Ok, I’m going to improvise this line, and you pick which one you like”, because we all just wanted everything to be the best. So that was super rad and I like that, especially with the first movie and Kay [Cannon] writing it, it’s not super girly, so that created a bigger audience for us. Big bouncers love these movies, Dads love these movies. My boyfriend’s Dad watched this recent movie more than me, and he’s a lawyer! It has such a huge fanbase. But you’re right, women haven’t been able to tell stories for long enough. I was kind of surprised, when I first entered this industry, by how male dominated it is. That’s fine, but I was surprised that there weren’t a lot of great roles for me, especially. I was constantly asked, “Do you know how to be a ninja? Do you know martial arts?”. I was very typecast and stereotyped. Then listening to other women, I learned that their roles were small or not fully formed as well. I think that having movies like these is a big kickstarter for all of us. I hope it opens way more doors for female storytellers.