Interview: Portrait of a Lady on Fire’s Adèle Haenel and Noémie Merlant 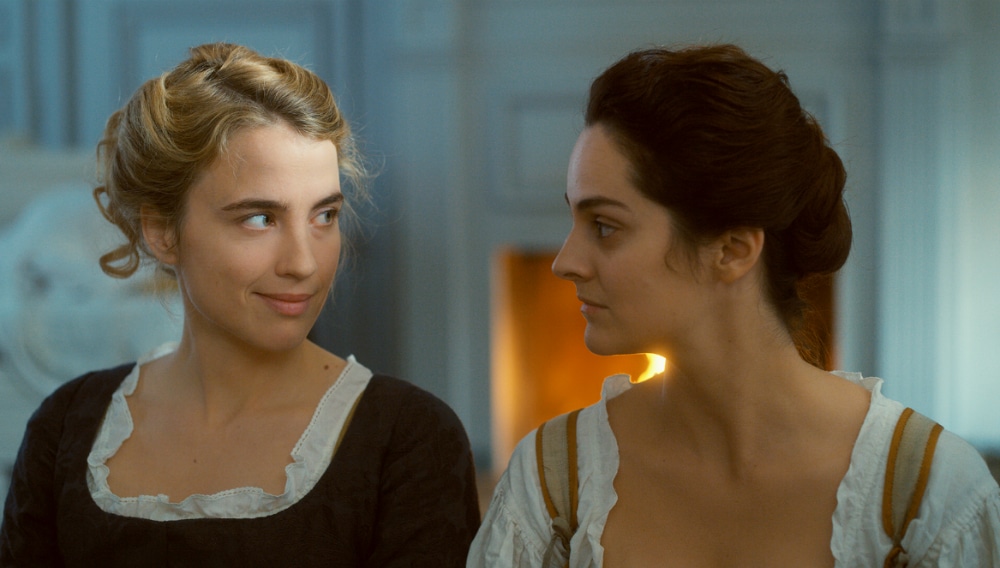 The film Portrait of a Lady of Fire is one of the most stunning masterpieces of the last year, (or decade, perhaps), and we were given the honour of speaking with its two leads, the bluntly honest Adèle Haenel and the more reserved Noémie Merlant, French actors who arrived the very first day of TIFF (literally the first day, the festival had not yet screened a single film). It’s appropriate that this was our kick-off interview of the festival, as the Céline Sciamma movie is daring, audacious, won the Queer Palm at Cannes, (the first for a female filmmaker), and the two lead stars are magnetic as painter and her inspiration, Marianne and Héloïse. The film says much about art, the nature of perspective, the nature of love, and feels like a refreshing classic, a twist of the staid historical biopic.

The following is a condensed and edited version of our sit down interview with Adèle Haenel and Noémie Merlant.

Brief Take: Noémie, I’m curious. Was that actually you painting in the film?

Noémie Merlant: Umm..[laughs] I was painting.

NM: But I paint with this hand [raises her left hand] and the real artist who was painting, painted with the other hand. So I had to paint with my other hand, so it was not really good, [laughs] but I had to paint something. I like to paint in my life, but I’m not good, it’s just something that I like to do. But it was important for me to do it, to try to convince myself that I was really doing it for real, it’s another look, when you’re a painter and you are looking at someone. You look the outside, the inside.

AH: It’s also that even if we aren’t painters, we still are as actors, we are choosing, we are facing the same question about how is it to picture someone. Is there an eternal truth, or is it just moments after moments?  So we made the same choices. Obviously not of the light and stuff, but from the inside, the questions are the same. 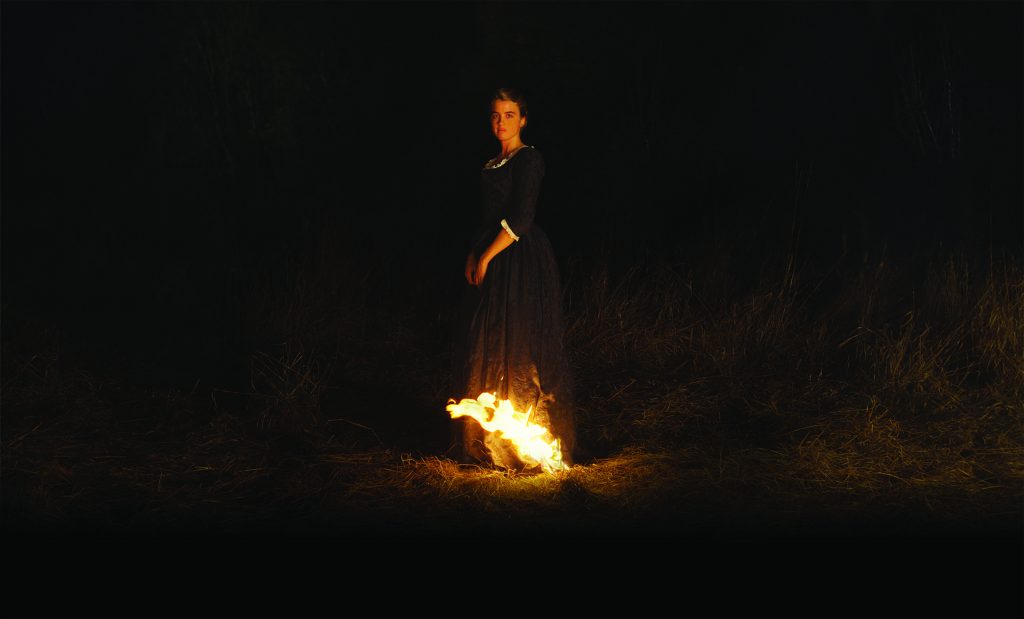 BT: What do you think of the focus shift in the movie, in which Noémie, I don’t think that we see you head on for the first twenty minutes of the film and by the end you are completely in the frame. Adèle, for your character it is the opposite. How did you go about playing that shift?

AH: I really wanted my character to be different from the beginning to the end. Because I think that it’s precisely the moment that there’s a key scene, it changes, the look, when Marianne tells Héloïse that she really looked at her a lot and Héloïse tells her back: “Well, I also look at you” And this is the moment in which the movie shifts a little bit. So I personally wanted to build a character at the beginning that was more “object”, that would become along the film, more and more a “subject”, so I embody that in the fact that I was acting very much at the beginning like it was almost like Noh, like Japanese Noh, but in a way that was just like a stereotype, but it was like that. I used my face like a mask, I was very restrained and everything. And the more that we were getting intimate, the more that the character would be faster and her emotions would go stronger and she would laugh or whatever, so she is getting more and more life, so I just made this shift along the way of the film.

NM: For me, the character at the beginning of the movie is more restrained. Marianne is a really powerful character but she wants to respect the rules because she feels lucky already to be a painter and to be free to not choose a man, and then, it’s like a dance with Héloïse, that for me, the costumes, the rigidity of everything is let go, and it’s kind of a dance. How you move is changed completely, because it’s a dance together, and so I see it more as a less separated and a more united to everything, to the people, to her, and I felt more already the echo of what we left in the movie. Because it’s a lot about a love story – how it gives an echo after, how it grows in you. Even if it’s over, it’s never over. The big part also is the fact that you play with what you say, in what you hide, and what you don’t say. The love story is a lot about that, when you create your love story with someone, you find together how you play and what you say.

BT: Do you think that there are scenes in the movie that dare the audience to look away?

AH: I don’t think that the film is shocking actually. For example, the erotica, the erotica of the film is very much based on invention and imagination. If you remember the sex scene, I can see that it’s not like [snaps] in your face kind of scene, it’s more like: “We have an idea, how can we do real penetration without being shocking?” We are not shocking, we don’t want to shock you. But, I must say, there is still sensuality between women, it exists, we still have water in our mouths and we have personal…I don’t know, we have humour as well. But I don’t think that the point is to be shocking.

NM: And we all have our limit. For someone, this is not shocking at all, and it can be shocking for some. For me, this movie is really intimate with elegance, with sobriété. This was just alive. It happened and it’s real and it’s magical, so it’s life.

AH: But I talk also about the fact that we invent the sexuality and the eroticism of the film, is also the way that we collaborate. Nothing was stolen from us as actresses. We didn’t have to show our bodies naked in the sex scene. This would be, this is very much violent. What we did is not violent, we have just been offered to…I don’t know, to create something. 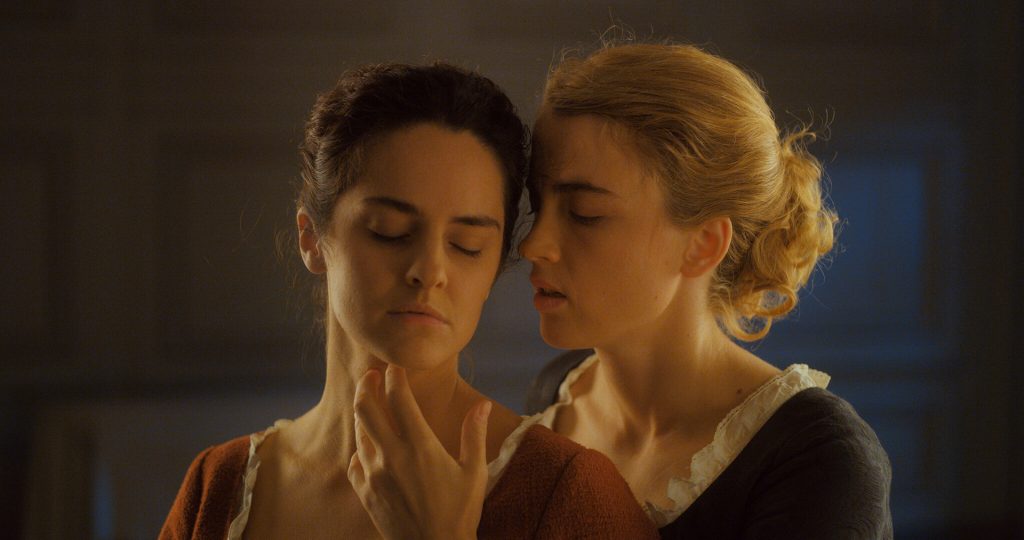 BT: What do you think is the goal of the film?

NM: For me, the movie has two really important goals. The first one is that it’s a love story and it’s all about love and what it feels to explore to be in love, what it feels like to fall in love, what we all explore – desires, emotions and just how it is, and what you show and what you don’t show. It’s all about that in love and in the movie, too, what you show, what you don’t show, and we decide to show not everything, not to have sexy naked and no, it’s how we show things differently and how we create a new way to talk about love. The second goal is all about art. Art can be created with a relation between people, really tender and kind and not constrictive, and with collaborators and not a muse and a painter, like a director and an actor who have to do what the director says. No, it’s all about respect between people and it’s all about sorority as well.