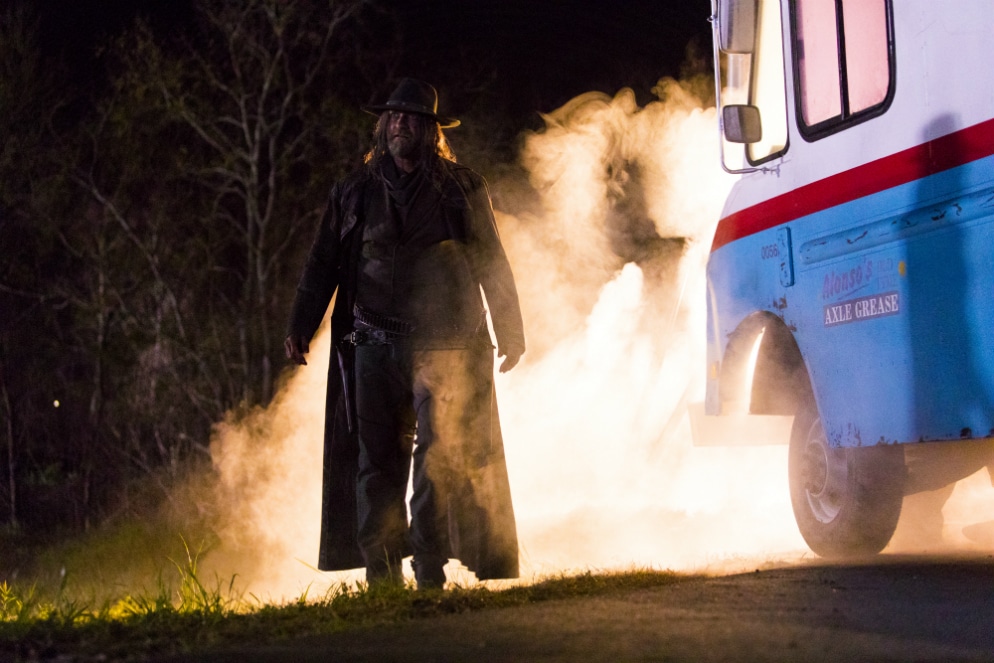 If you haven’t seen season one of Preacher yet, start binge-watching it now. Adapted from Garth Ennis and Steve Dillon’s hit DC Vertigo comic book series by creators Sam Catlin, Evan Goldberg and Seth Rogen, the AMC Original blends horror and comedy into one twisted, dark delight of a show. The program revolves around an all-powerful Preacher (played by Dominic Cooper) who, in season two, embarks on a road trip to New Orleans to find God. Along for the ride is his girlfriend Tulip (Academy Award nominee Ruth Negga) and complex vampire Cassidy (the enjoyable Joseph Gilgun). In hot pursuit of the trio is the deadly Saint of Killers, played by renowned character actor Graham McTavish (Outlander, The Finest Hours).

We had the opportunity to chat with the eloquent and down-to-earth McTavish a few short days prior to the premiere of Preacher season two. The following is a condensed version of our lively conversation.

Brief Take: Let’s talk about your character, the badass Saint of Killers. He’s someone who isn’t very vocal, but in your layered performance he says so much with his eyes and body language. As a self-proclaimed fan of the books and surrounded by other people who are as well, it must have been so important to you to get the character just right.

Graham McTavish: Yes! I’m a big fan of the comic books and felt that responsibility when I was portraying him. They did stuff, particularly in Season 2, they changed the color palette on the costume a little bit and a little bit of the makeup changed and the hair, just to reflect my experiences in Hell. My character has quite literally gone through Hell and now I’m among the living. The physicality suddenly changed, my vocals changed a little bit. The discipline of the constraint that the character has is interesting from an acting point of view. The eloquence of the stillness and the silence and how powerful that can be in a performance is something I’ve always been interested in on stage and in film. Sometimes that’s what really draws the audience in. With this character, it’s completely necessarily. He’s very economical in his movement and his speech. He really only moves or speaks when he has to. There’s nothing superfluous about the Saint.

BT: What’s your favorite aspect of portraying him?

GM: As somebody who’s grown up in Scotland and England, you never ever think that you’re going to have the opportunity to play a cowboy. So being in that iconic outfit, the outfit that I familiar with from the books, and also as a familiar outfit in the world of Western mythology, was just fantastic. I loved being in that look. It instantly transports you in that character when you have ten pounds of iron strapped to your waist, you’re a cowboy right away.

BT: Did you have to go through any sort of specific training in order to look almost as if the guns are an extension of you?

GM: Well really with the .44 Colt, because it’s so heavy, there’s a specific way that you have to cock and fire it. You need to use the weight of the gun to throw back and cock it on your wrist. You can’t just hold it straight out and pull the hammer back because it’s just so heavy. You learn those things pretty quickly. Just trying to make it look as if I was familiar with the object, you keep them with you as much as you can, the sword included.

BT: What’s it like working with series Co-Creators, Co-Producers, Co-Directors and Co-Writers Seth Rogen and Evan Goldberg? They obviously have such an immense respect and admiration for the source material as well.

GM: Yeah. Yeah they do. Well they’re like me. When we first talked about doing this, we just talked about our shared enthusiasm for the source material and what uber fans we are of Garth [Ennis] and Steve [Dillon]’s work. When you’ve got that as your background among the executive producers on the show, you know you’re in safe hands. The first two episodes of this season that they direct, they bring and establish a sort of stylish, witty approach to the telling of the story. You know terrible things happen in the episodes. I do terrible things to people and there’s gore aplenty. But it’s all done in a stylish and playful way, and I think that’s the key to its success. It’s interesting and appealing and unique in the television world.

BT: I love the dark humor in those first two episodes of Season 2.

GM: Ooh yeah! It’s so dark. As the season progresses there’s so much of that added in. There are these moments when I read the script of every episode, there are several in each episode, that I would look and go, “I can’t believe that they’re going to do that!”. It’s just outrageous. I ask, “Are you really going to film that?!”, and they say, “Yes. Yes we are”. It’s delightful because it genuinely surprises you and I don’t think you can say that about a lot of things.

BT: I’ve only seen the first three episodes of this coming season but I read that we’re going to be seeing a lot more of your character and a lot more of his backstory.

GM: Yes. You learn a little bit more about the good side of the Saint, or the good side of the person who inhabits the Saint. You see the struggle that he has, that all of the characters have, between their inner demons and their desire to do good. You do see the Saint opening up a little bit. I mean you’re not going to see him having impassioned speeches any time soon, but he does reveal more of himself and his motivations.

BT: If you had the power of Genesis [to command anyone to do anything] for one day, what would you do with it?

GM: It sounds a bit highfalutin but I’d want people to spend more time talking to each other, engaging in understanding different points of view and examining different approaches to life, different cultures. Making the world a place where people interact and understand each other, rather than building walls between each other and finding reasons to distrust and dislike one another. That would be a good starting point. *laughs*

BT: You’re one of the rare actors who has such a warm, open dialogue with your fans online.

GM: I do try to! I have a sort of ambivalent relationship with all these sort of things. Social media is an interesting sort of manifestation of the subject that the show deals with. They’re a force of good in many ways, but also Satan’s little helper as well. So I have a kind of ambivalent relationship with it. I do enormously respect the fans’ involvement and enthusiasm, not just with this project but also with Outlander and anything I’ve worked on. As I just said, I’m all for people getting to know each other. What I don’t like about some of these social media outlets is that they’ve become forums for such bigoted, narrow minded hatred. You know the world will be a better place when people start to understand that it’s okay to have a different point of view.

Preacher season 2 has its two-night premiere starting Sunday at 9pm on AMC.