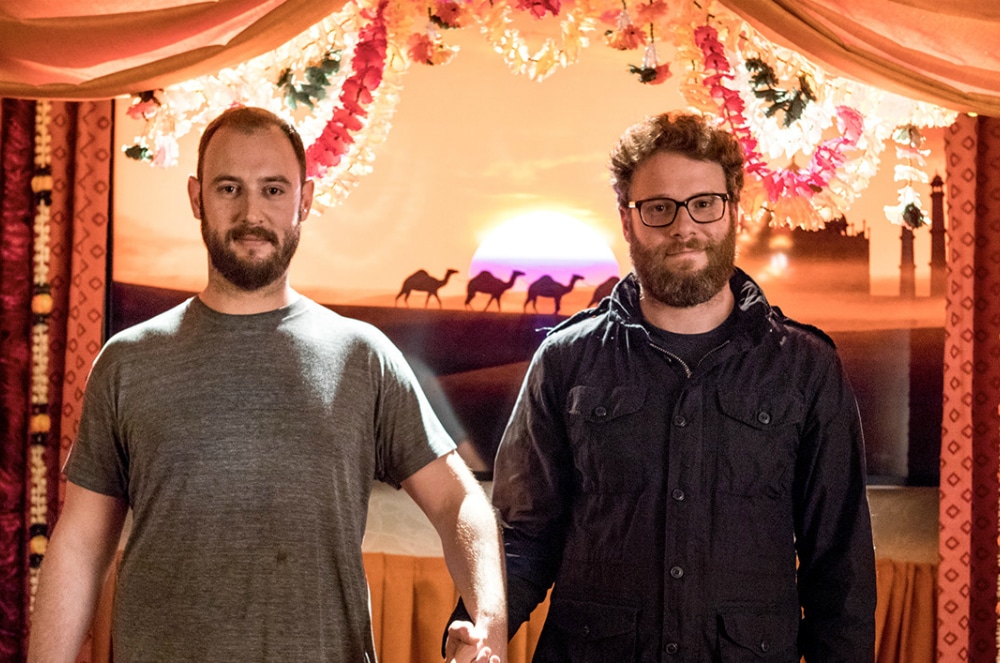 In our very exclusive conference call with AMC’s Preacher‘s co-creators/executive producers Seth Rogen and Evan Goldberg, the hugely talented duo are exactly how we imagined them to be. The Vancouver natives finish each other’s sentences, make each other laugh heartily (Rogen’s famous guffaw is even more infectious on the phone), and give some of the most intelligent (and lengthy) answers to media questions, that you can sense the VIP group of reporters instantly become enamoured with the long-time work partners and friends.

The following is a condensed and edited version of our hour-long call with Seth Rogen and Evan Goldberg.

How would you say this season differs from the last season of Preacher?

Evan Goldberg:  Although the first few episodes are revolving more around the house and Angelville, the show itself expands a lot this year. I would say maybe even more than it did last year, as far as how many different locations the show takes place in and to how many different cities it takes place in. I think it does continue to expand. The first few episodes make it seem like they’ll be largely anchored in Angelville throughout a lot of the season, but it doesn’t really come together that way.

I think for the story though, I think it’s like last season. I think this season, the big difference is that Jesse needs the help and Tulip has to help him, as opposed to last season when it was kind of the opposite of that dynamic.

With Tulip, this season she’s just fucking sick of people messing with her and she decides to take shit into her own hands.  And she’s not going to be anyone’s pawn. She’s not going to let anyone manipulate her. She’s not going to follow Jesse. She’s going to do what she wants; the way that she thinks it should be done and obviously, kick a lot of ass while doing so.

Entering Season 3, Cassidy and Jesse are in a massive argument and Cassidy despises him. Cassidy really goes on his own journey but he’s still integral to the story and he still has a ton of stuff with Tulip and Jesse. But he kind of goes on his own side journey for a good portion of it and goes into a fan favourite storyline, which is…

EG: Is it okay to say?  Les Enfants du Sang?

SR: Les Enfants du Sang. The Children of the Blood.

EG: The Children of the Blood.  So he kind of has his own little vampire-based side story that is bizarrely hilarious and incredibly crazy, and really gives Cassidy and the actor Joe Gilgun a chance to really shine.

SR: Yes, that was always one of my favourite parts from the comics, was the Les Enfants du Sang.  And, in the show, it’s just as crazy as you would hope.

EG: I feel like last year we reached a pretty good crescendo.  But I can promise that the Allfather – it’s intense and it’s crazy. If you’re a fan of the comic, you’re not going to think that we pulled the punches on the Allfather, and if you’re not a fan of the comic, you’re going to be like, “How the fuck did they think of this shit?”, and the answer is, “Garth and his demented mind thought of it and we’re just bringing it to you.” 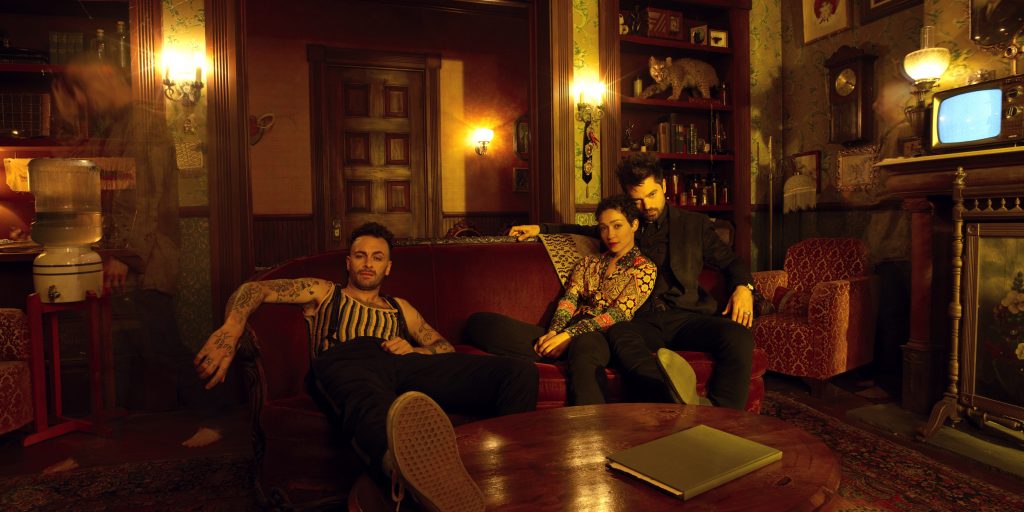 Preacher is really a road story in its inception and you guys have handled that in the first three seasons by turning each pit stop into the setting for an entire season.  How did you decide on that structure?

SR: I mean part of it honestly is like logistical, like we do not have the ability to do every episode in a different city and do like – you know, it could just have it be like, “Oh, Episode 1, they’re in San Francisco. Episode 2, they’re in New York. Episode 3, they’re in Albuquerque.”  Like the nature of how TV shows function sometimes, and this is one of them, is like you just do it for financial reasons, unfortunately.  You kind of need to revolve it around a few main locations.

That being said, I think they’ve – this season, especially, I think is a good example of it – as it goes on, it really does not feel like you’re just stuck in Angelville the whole time. There’s a lot of locations. There’s a lot of adventures. Cassidy has developed his own thing and so I think it’s something that we are trying to capture – the energy of a road trip while not being able to afford actually bringing the show on a road trip. [laughs]

EG: One of the most exciting… [trails off]…you’ll have to watch to find out.  But one of the most exciting parts of the whole season is through a discussion with the production team, and Sam figured out a way to have an adventure that goes to Japan briefly, which is really taking a deficit and turning it into a positive. They figured out ways to just make it feel huge, even though we had to make some concessions. 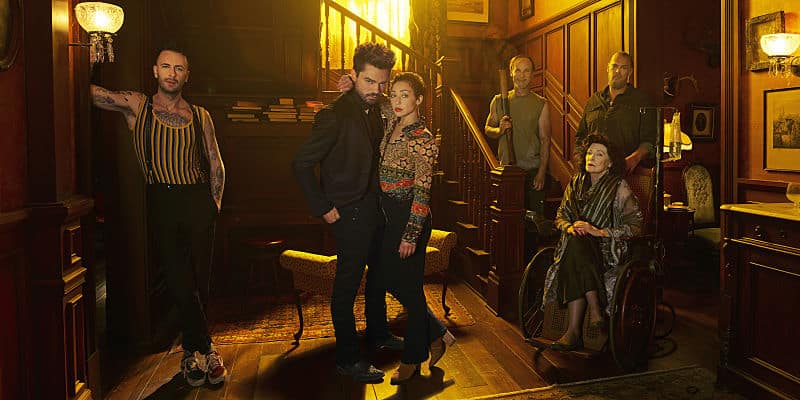 You’re rapidly approaching legendary status as best friends from high school who are now writing, developing, executive-producing and directing TV shows and movies together.  How does your partnership work in each of those areas?

SR: Pretty much the same.

EG: The only thing that isn’t just us sitting together doing it all is when Seth acts, because I’m no actor.  But we just do everything side by side, and we always have. We make sure that we both think things are correct before we proceed  and if they’re not, we have at it and debate it. But it’s pretty boring. It’s really friendly partnership. 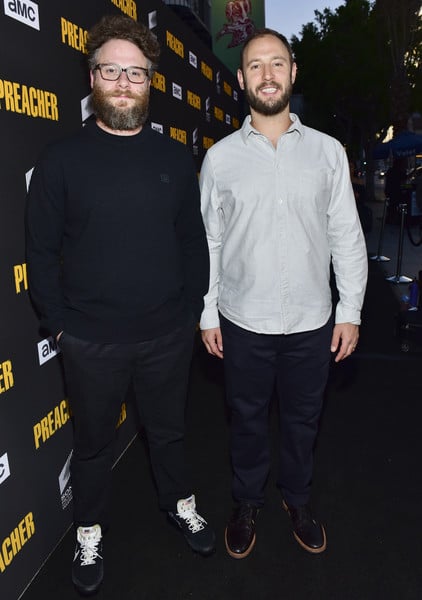 Can you talk a little about the casting of Jeremy Childs, Colin Cunningham and Betty Buckley?

SR: I mean it was amazing how…sometimes it works. The characters don’t have to look like the characters in the comics, but with Jeremy and Colin, we actually found two wonderful actors who happened to highly resemble the people from the comics, so it just worked out. In terms of Betty Buckley, we saw Split. Split was awesome and…

SR: And we said, “We should get the woman who was in Split” , and that’s Betty Buckley.

SR: And she crushes it.  She’s just awesome. 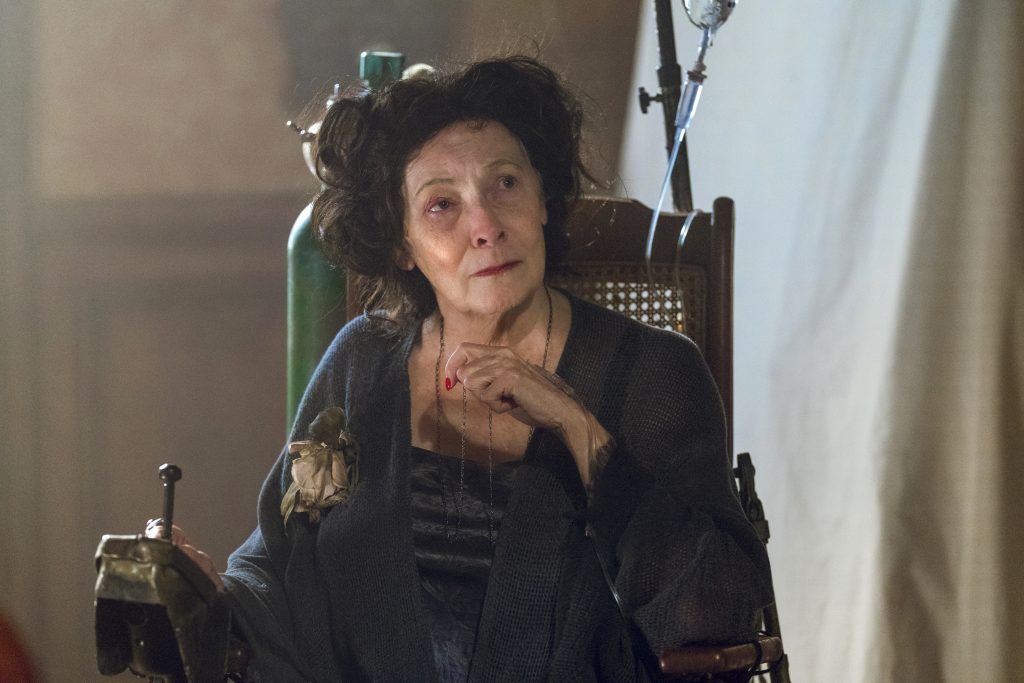 How influential is the success of Preacher with being able to start moving forward on The Boys with Amazon?

EG: I think it’s absolutely key and without…

EG: … Preacher, I can’t imagine they would have even considered it for a minute.  Because even though Preacher is like, by far the craziest, mostly reality-bending, genre-bending thing, The Boys is much more grounded in reality. But it is equally insane in its own unbelievably gritty, unforgiving analysis of societal clause through this very different story.

But yes, without any doubt, there’s no chance they would have even considered letting us do this, nor would they have considered anyone doing it, I would imagine, without Preacher, because it’s just proven…

EG: …that a show this crazy can happen.

SR: Exactly. I think mostly that’s what Preacher did. It’s like it had kind of been dubbed un-makeable and that was crazy to us because we couldn’t have had a more clear vision of how it could have been made. And a similar thing was happening with The Boys where it was kind of handed off by a few different people who, by all means, should have been more suitable to make it than us, but for whatever reason, they couldn’t.

And the whole time we were just sitting there being like, “We get this. We can do this. This is not that crazy to us. We understand how this world works”.  And we partnered with Eric Kripke who really understands how the world works, and Dan Trachtenberg made one of my favourite movies that had come out in a long time. And so getting him to direct the first episode was just thrilling, honestly.  We were just in Toronto watching them film it  and I think they’re filming the second or third episode right now.

At Comic-Con last year, Seth, you joked that there was a specific role that you wanted to play. Will we be seeing you on screen on the show this year?

EG: It hasn’t happened yet, so…

SR: …But it could still happen.