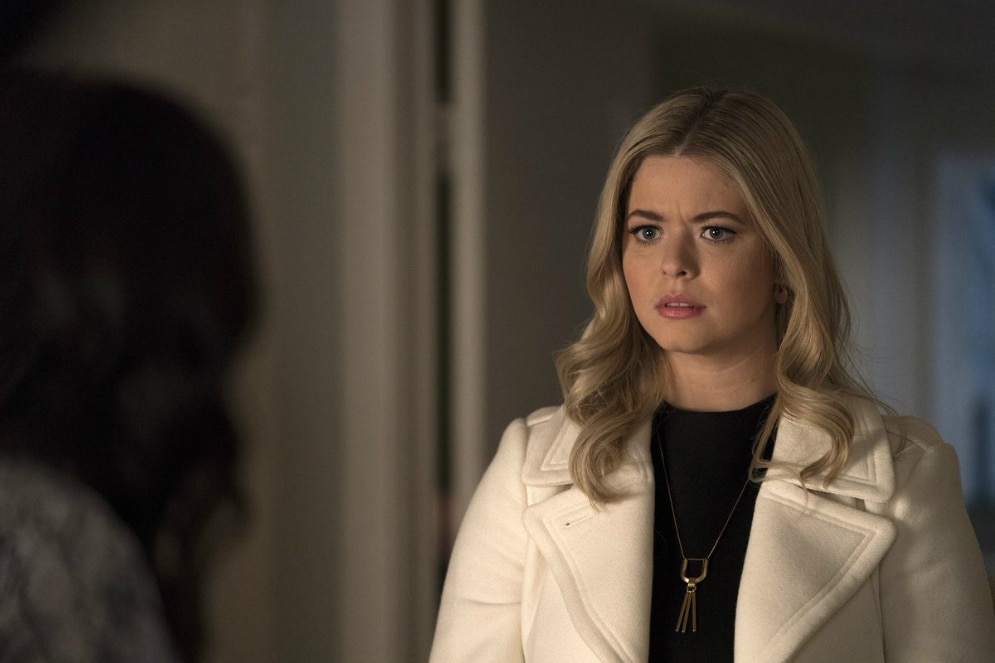 Our interview with actress Sasha Pieterse, in support of her new series Pretty Little Liars: The Perfectionists, commenced by talking about her lovely spring wedding. According to Pieterse, everyone that she wanted was there, save for her publicist Gary, who was there in the room as we had our intimate sit down chat. She seemed to genuinely be disappointed that he couldn’t make it, but at the same time many of her cousins and relatives from South Africa were there, as it was important to her to have a nurturing group (and a caring husband, of course) there to support her on her big day. Also, she got married in a castle—an actual castle in Ireland!—so for the wedding to have run smoothly seems like an incredible accomplishment for the still giddy newlywed.

Though it was Pieterse’s first time in Toronto, she gushed about the loveliness of the city and how much she enjoyed being here. (This despite our interview day having been a cold, snowy day.) Speaking of locales, she lit up when she discussing the ease of the PLL: TP shoot in Portland. She had wrapped approximately a month earlier and the shoot lasted for about four months (as opposed to a Pretty Little Liars shoot that lasted for about ten months). She stressed to us that viewers won’t have had to see Pretty Little Liars to enjoy this spinoff series. Though many of the built in fans have grown up alongside PLL, she will definitely develop new fans as well (and surprise some of the old ones) because there’s a darker tone that is found within this series and the focus is on college-age characters rather than on high schoolers (in the case of Pretty Little Liars). 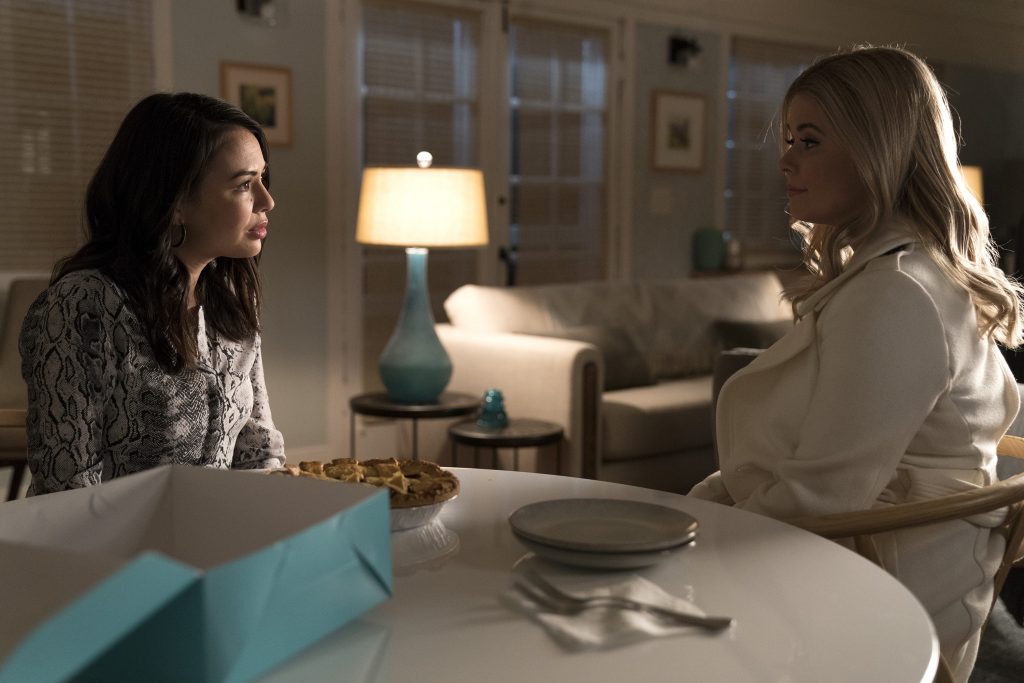 The series feels fresh and original, making it its own entity and not directly related to the PLL Universe.  Though Sasha Pieterse is listed as number one on the call sheet, she was humble about that fact and quick to mention that the series is an ensemble production. Pretty Little Liars: The Perfectionists is still quite fortunate to have Sasha Pieterse as their number one as she gives the impression of being collaborative and integrative. She quickly credits the developer of both series, I. Marlene King, as a huge aid in helping her be a leader. She also praises the crew and those around her to inspire a feeling of professionalism. She’s not so effusively kind, however, about the infamous outfit she was told that she had to wear frequently for the sake of continuity: “I wanted to burn the yellow sweater”.

On whether she knew any of the Pretty Little Liars prior to working with them, Pieterse said that she didn’t know anyone, with the exception of Lucy Hale during pilot season. They had auditioned for similar roles but both ended up getting cast on Pretty Little Liars. On playing different ages of her character Alison DiLaurentis, she remarked that: “It was interesting with my age, growing with the fans”. She calls the other actresses on PLL her “soul sisters” and warmly mentions that they’ll always be close. Pieterse was extremely kind to fans of the series and to fans of hers: “Pretty Little Liars is a great part of my life and an experience I will never forget”. She’s hopeful that the fans will follow her into this new series, and also into her additional pursuits of interior design and cooking (she gets particularly excited when talking about her cookbook, which is coming out later this year).

She surprises me with both her answer of who she would like to work with again and how she prefaces the answer. She says from the outset that the person that most inspires her is “someone who doesn’t receive a lot of press”, which leads me to speculate that it’s somebody who is more behind the scenes or a breakout in the making. But then she shocks me by revealing that she’s referring to Joaquin Phoenix, who she worked with in Paul Thomas Anderson’s Inherent Vice. She clarifies that he doesn’t receive a lot of press in that he doesn’t broadcast himself (eschewing most, if not all, forms of social media and being very selective in sharing his perspective with the media). 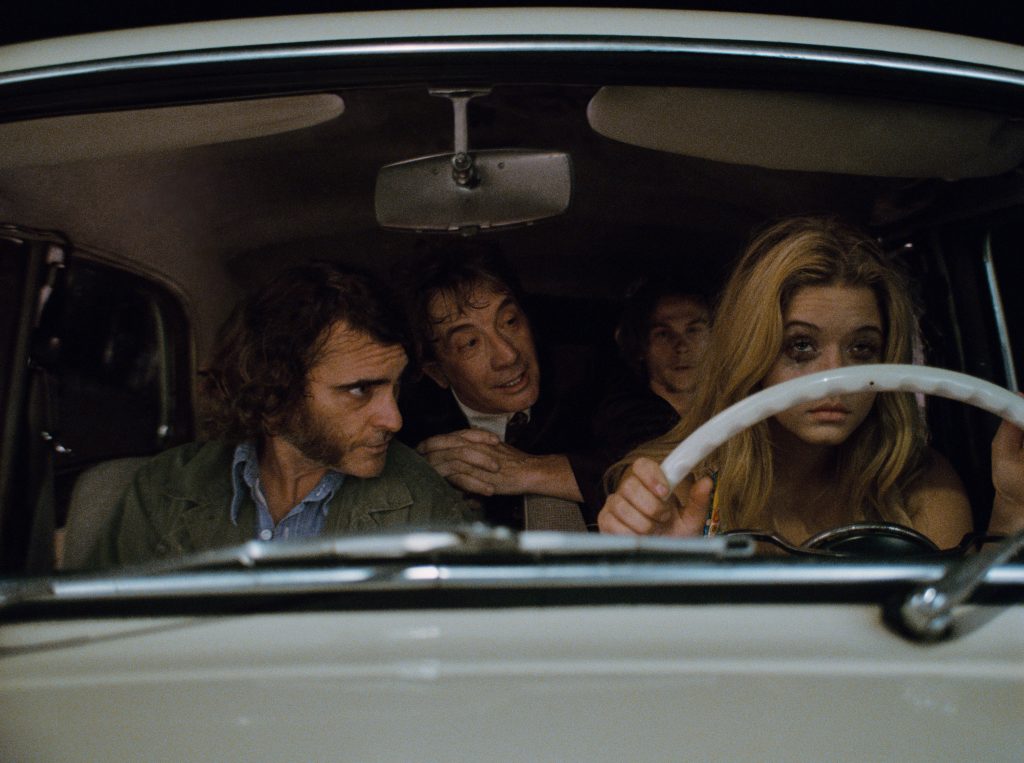 This answer then leads into a brief discussion of theories of that particular film and that a way to interpret the Thomas Pynchon book, for which Pieterse appears to be a fan, is that Joaquin Phoenix’s character is something of a “High Detective” and furthermore not everything that is shown in the film might actually be ‘true’. The truth of the matter is that the film was quite an experience for her, and this is clear in what she thinks of Joaquin Phoenix, who made sure to “learn everybody’s name”.  She also made sure to highlight Josh Brolin as someone she admired, even though they didn’t share any scenes together in the film. She thought that he was “so nice” and an incredible actor, and someone she was inspired by. She described her character of Japonica Fenway as being extremely different from her, although the role has remained close to her.

Our conversation then quickly returns to PLL: TP (although we could have easily talked for hours about Inherent Vice). The holdover leads from Pretty Little Liars—Sasha Pieterse and her co-star Janel Parrish—are lucky in that their husbands get along extremely well. Multiple times, Pieterse stressed the importance of being true to herself and being real and honest. “It’s not always perfect, no pun intended”. It leads into an interesting discussion of the role of social media (which she brings up), how she makes sure to share posts in her sweatpants and without make-up, because at one point or another, the make-up has to come off. 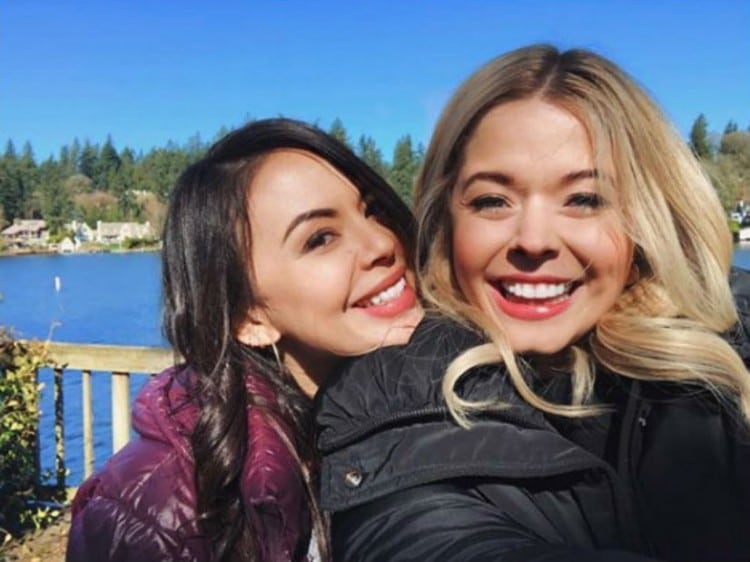 We’ve done our fair share of interviews, and with Pieterse, it’s easy to see how she is grounded and authentic. Our conversation felt familiar—like a chat with a friend, even though we were speaking and meeting for the first time. But on the other hand, she still radiates the aura of a star. I appreciate her self-awareness in terms of having a platform and in wanting to use it in the “pursuit of good”, and also when she discussed how she and her husband are always determining how much of herself she wants to share with the world. These issues are also at the heart of Pretty Little Liars: The Perfectionists, in terms of privacy and security, surveillance and being watched, and are extremely relevant in today’s world.