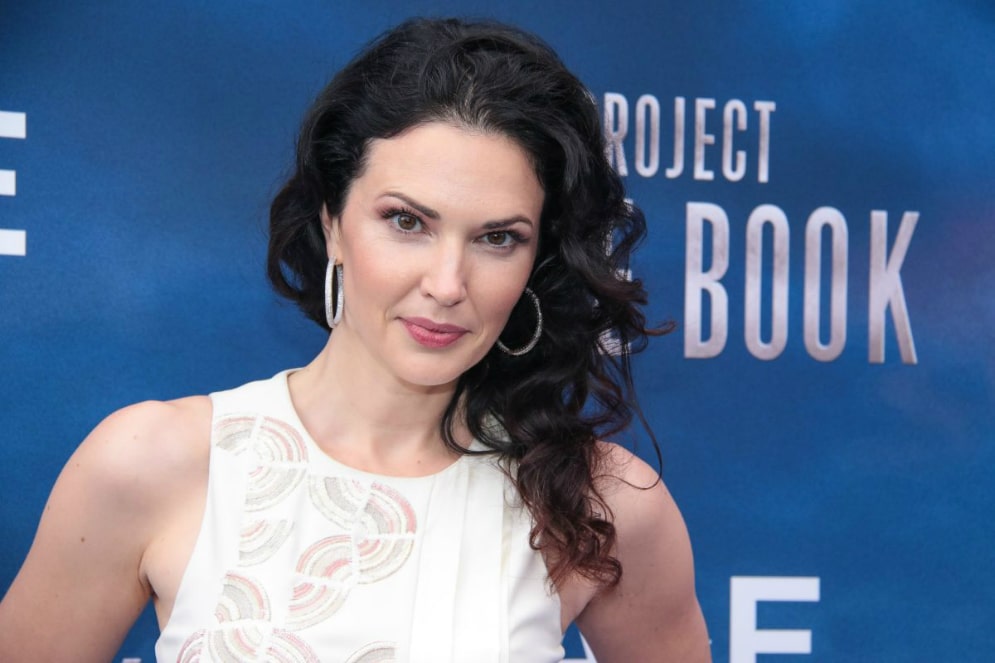 It was definitely a one-of-a-kind experience sitting and talking to the Surrey B.C.-born actress Laura Mennell one week prior to the holidays, in advance of the premiere of the hotly anticipated series Project Blue Book. The stunning series is set to debut January 8th on History across Canada and the U.S. from A&E Studios and is produced by award-winning director Robert Zemeckis. We first heard about the series in July at Comic-Con and it’s a tour de force. Laura Mennell shines in the series as Mimi Hynek, wife to Josef Allen Hynek (played by the shifty Aiden Gillen), but this role is so much more than that of a standard supportive wife. Mennell builds upon her great work in Loudermilk and The Man in the High Castle to bring to life the real-life figure of Mimi Hynek.

There are many secrets to be uncovered in the series, based upon the true top secret U.S. Air Force sponsored investigations of the 50’s and 60’s into UFO-related phenomena known as “Project Blue Book”. Speaking to Mennell was a fantastic experience as the talented actress provided Brief Take with some compelling reasons to catch the series, and I am happy to admit that we’re now very hooked on the show.

The following is a condensed and edited version of our chat with the spirited Laura Mennell of Project Blue Book.

Brief Take: What’s been your favourite aspect of promoting the show so far?

Laura Mennell: Well we had some really interesting screenings, which is nice. Specifically in the last month in Dallas and Chicago, in which a live audience got to watch the show for the first time, and they were really, really excited about our show, which was just as an actor so nice to see the immediate feedback. [laughs] It was really interesting because we had a Q&A session, I think with the first one, and as soon as that ended I went directly to the mediator of the Q&A, and I was thanking her, and I didn’t notice, but behind me, there were various huge line-ups to talk to the cast and our creators. It was really exciting that people wanted to meet us and to talk to us. Also the MUFON community, both in Chicago and in Dallas came and were surprisingly very warm, in terms of loving our show, so that was nice too. Also, a lot of women would come up to me specifically and love my character and were really interested to see where she would go. So it’s fun being a part of that and seeing people genuinely excited. They make you go “okay, I’m not crazy. This is a great show”, which is perfect. LM: What’s cool about our show is that these are real life classified cases that people can do more research on later if they fall in love with certain cases, they can figure out a little bit more about them on their own time. I think that real life aspect is really interesting, especially since Project Blue Book had so many cases. I think it was over 12,000 cases that they investigated in the fifties and sixties, and 700 of them, still, to this day are unexplained. I think that this mystery of UFOs is really quite fascinating.

BT: Let’s talk about your scenes with Ksenia Solo. We had the opportunity to interview her and she’s just wonderful.

LM: Isn’t she great?! She’s the most lovely little lady. She’s so tiny.

BT: Tell me about your dynamic with her on screen.

LM: How about I talk about the Susie-Mimi relationship in a way that won’t disclose too much, how about that? Without giving away any spoilers, because it’s very early on and we haven’t aired, we’ll just say that Mimi develops a relationship with a woman called Susie, played by obviously the wonderful Ksenia Solo. I have to say, in real life Ksenia and I got along just so effortlessly well that I think that really plays out well on camera, in terms of our chemistry. Susie is a very intriguing character, who draws in Mimi, quite possibly because she’s so different from how Mimi sees herself in many ways. She’s sort of the glamorous, ideal woman of the 1950’s. She’s fashionable and confident and carefree and fun, and as Allen’s work with Project Blue Book pulls him farther and farther away from home, and makes him more and more secretive, it puts a lot of stress on their marriage, and Susie is there for her in many ways. It’s also the catalyst for a lot of change in Mimi, helping to sort of bring her out of her own comfort zone and helping her find her inner strength. As they develop a very close and complex relationship, that evolves in such a way that there are high stakes for both women in their separate lives. And yes, their friendship does develop and unravel in a very surprising way, which I think that the audience will have to tune in and find out about. [laughs] They develop a very interesting friendship with a lot of adventure and fun, and there’s a lot of darkness in there and mystery. It’s very poignant at times and things aren’t always exactly how they seem, but it’s interesting. BT: This is a historical series but feels like in the pursuit of truth, it is very much about the present day.

LM: Of course. There’s a lot of scenes that are relevant today, including obviously ‘fake news’ in many ways. I think Project Blue Book, we’re saying it was very much a part of this ‘fake news’ world in that it was developed to misinform the public in many ways, so that it would distill any possible mass hysteria that could have happened at the time. There’s also other themes like the threat of nuclear war, the threat of other countries. We’ve also had issues recently with threats of North Korea, although in this show, it’s during the Cold War. There’s issues of fear and paranoia surrounding the Russians, that’s been part of the new threads in today’s world. So there’s a lot of neat little elements that we draw from that also easily fits with the past and the present as well.

BT: I have to say that it’s so great to see you as the lead of the series.

LM: Thank you so much. I’m just so lucky that I have had the opportunity to work with so many fantastic and talented actors on this show. Like Ksenia, who I was mentioning, and Aiden Gillen is just a lovely, lovely man, so intelligent, and I think he’s the perfect Allen Hynek in many ways. I think that he has this natural intelligence to him and some funny, little quirky things, and he’s just a real, genuine person. I love seeing how his character comes so effortlessly through him. We also have Michael Malarkey, who’s so perfect for Quinn, and Michael Harney and Neal McDonough, so I know it will be a good show. BT: What are some of your acting touchstones that have brought you to this point?

LM: Oooh, that’s a good question. Really important stepping stones I think, even starting way back with A&E in Flight 93, it’s interesting that I am back working with them again with Blue Book. Then going on to Watchmen, Zack Snyder’s Watchmen, which I loved, another period piece; to be a part of that was out of this world. And then stepping into Alphas, being one of the series leads of that, working with David Strathairn and the rest of that fantastic cast for two seasons. Sadly, we didn’t get more, but that was a really great time. David Strathairn was a really lovely person with whom to work. God, even doing a cool play. Vancouver has a very prolific theatre company called the Electric Company, and them and the Arts Club Theatre Company did this fantastic show called Tear the Curtain! that toured Vancouver and later on into Toronto, for which I loved being a part. And there’s always lots of little steps along the way. This past year, Loudermilk, working with the Farrelly Brothers and Ron Livingston, I loved being part of that. Such a great grounded, real, fun comedy. And The Man in the High Castle, I was just so excited to be part of that show this past year as well. It’s a fantastic, fantastic show. Again, very timely. So yeah, there’s been a handful. BT: How do you want people to come to this series?

LM: For me, when I first was introduced to the series, I’ve always been open to the unknown, but I wouldn’t say that I was a believer, like a full-on believer of the UFO phenomenon. But I think that is what’s really interesting about this show. Regardless of on what side of the fence you are, whether or not you are a believer, I think that Allen Hynek, his character will really draw people in, because he’s not your stereotypical wingnut flying saucer enthusiast of the 1950’s, he’s this very educated man. He came at this research for Project Blue Book with a certain amount of skepticism and came at it from a very scientific viewpoint, and little by little realized that there is something to this.

Not everything can be explained, and (he) became a big believer in the UFO phenomenon and I think our show really makes a good case for that. I just think that people will really be drawn in that way, and I think that’s exciting. I just can’t wait to share this with viewers to see how they feel about it, and to see how it makes them think differently and to get excited about things and to learn about things. Our show is very entertaining, but it’s also educational at the same time, and I think that’s exciting. Be skeptical if you want and see what’s presented to you, and maybe you’ll think of things differently, maybe your mind will be changed. I think it’s fascinating. I think it’s really interesting stuff. 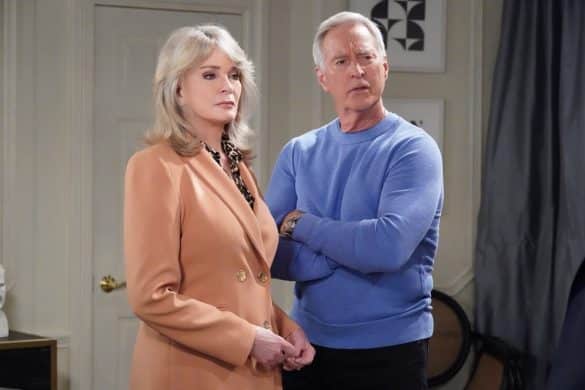 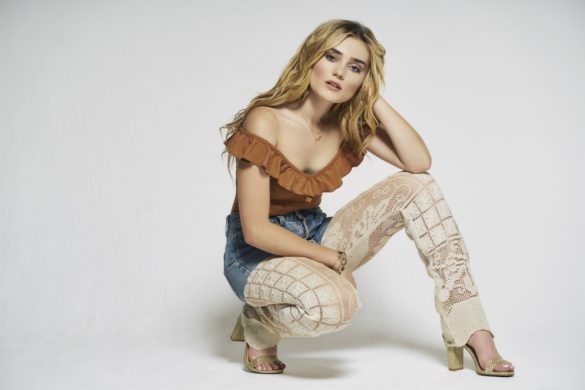 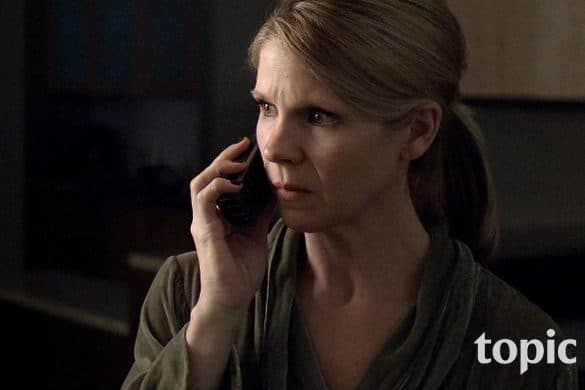