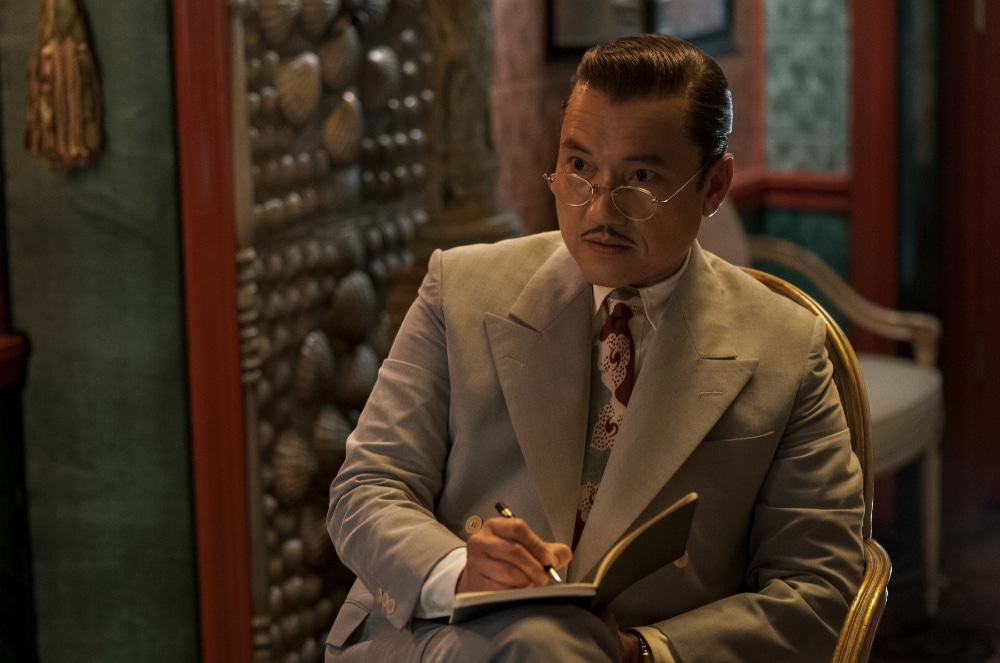 Jon Jon Briones is one of the most versatile and mesmerizing performers on stage and screen, and his brilliant performance as the enigmatic Dr. Richard Hanover in the Ryan Murphy Netflix series Ratched is a must-see. As an admirer of his unique portrayal of the Engineer in Miss Saigon and his award-worthy portrayal of Modesto Cunanan in The Assassination of Gianni Versace: American Crime Story, I was delighted to be given the opportunity to chat on the phone with Jon Jon Briones about his work on season one of Ratched. The following is an edited and condensed version of our in-depth conversation.

Brief Take: Hi, Jon Jon! Let’s talk about Dr. Richard Hanover. I imagine that as an actor, he’s a very complex character to inhabit, especially because so much about his history isn’t revealed until the later episodes of Ratched. Viewers can see the sadness and guilt within him, you see that he’s very ambitious and empathetic, but you don’t know how he ended up at Lucia State Hospital. I’m curious for your take on the character and how you went about crafting your portrayal?

Jon Jon Briones: I did a lot of research into mental health during the 1940s and you discover so many things. Thank god for YouTube, you actually see them there, not just reading about it. The thing is, Ryan (Murphy) and his writing staff have put together this world that’s so dynamic and so complex and can be dangerous and so interesting. And characters that…you’re right about that, almost all of the characters you don’t get to really know until later on because you have to keep peeling the layers. It surprises you because you have a preconceived prejudice because you judge them right away, and then it surprises you and you go “oh, I’m liking this person now”, you develop empathy for them. That was so true with Richard Hanover. For the show to acknowledge my culture in this character was very important and made it easier for me to relate to him, and him being a father as well, that helped me a lot because for me to tell the story of Doctor Richard Hanover, I had to at least understand him, I don’t have to like him, but I do actually like him and understand him, even though he was trying these horrible methods of treating his patients. But you understand where he’s coming from. He’s, you’re right, ambitious, he needs to prove something, but at the same time, he truly believes in helping people. He truly believes that he can heal people. In a sad way, there’s a God complex in him, which eventually got him in trouble. 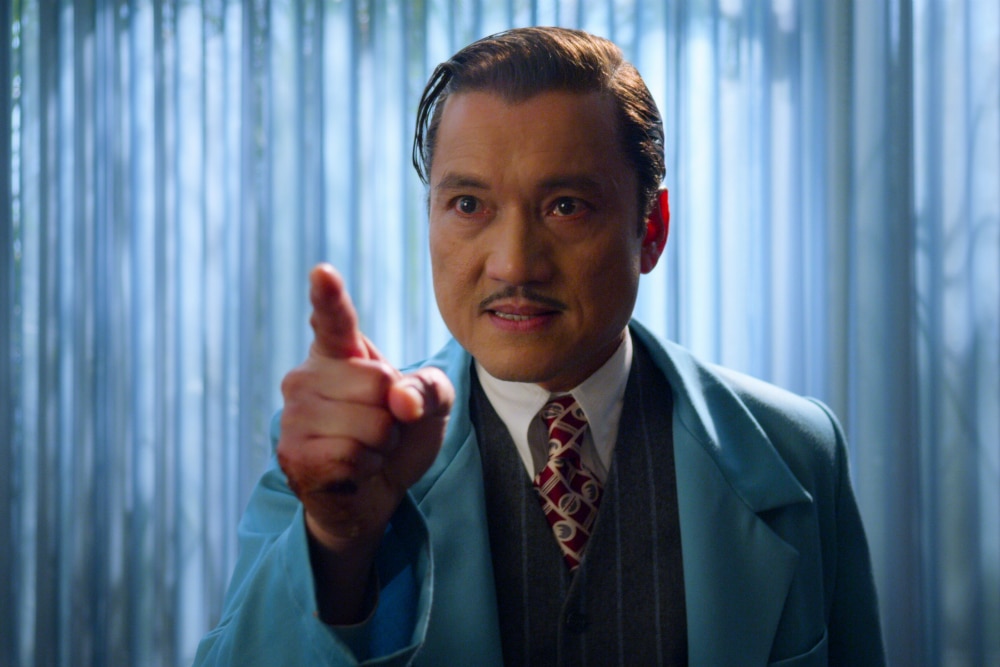 BT: I thought you also really nailed the tonal shifts in the show because you really have to balance the comedic and the dramatic elements of it all, and sometimes both elements are there within one scene. Some scenes of yours really stood out for me, in particular. The big dance scene with Judy Davis, the drug fuelled amputation scene with Brandon Flynn, and the lobotomy demonstration scene. Can you talk a little about crafting those scenes?

JJB: Wow. Yeah. Those were really heavy interesting scenes to do, and fun, especially my dance sequence with Judy Davis. I’m so horrible to her in this show that I was so glad we were able to do that dance. To do a scene with Judy Davis is such a special thing. I’ve admired her work and she’s such a good artist but also such a good human being, and she’s so funny. That scene was shot and it was a little complicated because it involved a lot of actors, background and main characters, so there was not a rush, but we needed to finish it. And dance sequences are always hard to film, but everyone was egging us on, truly, they were just having fun with us. It was so much fun!

The other one, stitching up Brandon, that was a crazy, crazy scene but so much fun because they put this body camera on me. So it’s on me and I’m controlling it with my body movement and that made it fun, because it got gory, as everyone will see. I had a lesson with a Doctor about stitching wounds so when I was stitching him up, I was shaking because the blood was sticking and I couldn’t move my hands, and the forceps were so huge, and I felt bad for Brandon because he was lying on the floor half naked, and it was cold, but he was such a good sport.

Then the lobotomy scene, it was very interesting because one of the patients is my actual son, Teo. He booked that and auditioned and got the part. So that one, we had the Doctor to help us out, and I guess this is what Doctors do as well, they take the emotion out of it. Because if you feel something while you’re drilling and cutting at the temple of a person, it becomes too much. It’s a good thing that you just look at it as a number. There’s a camera here, they say “action”, you slice, you put this in, you turn it, and you do it technically, and that really helped me. But once they put the real body there, [laughs] that was…. because they had a dummy there first, and then once they replaced the dummy with a real person, that became nerve wracking. 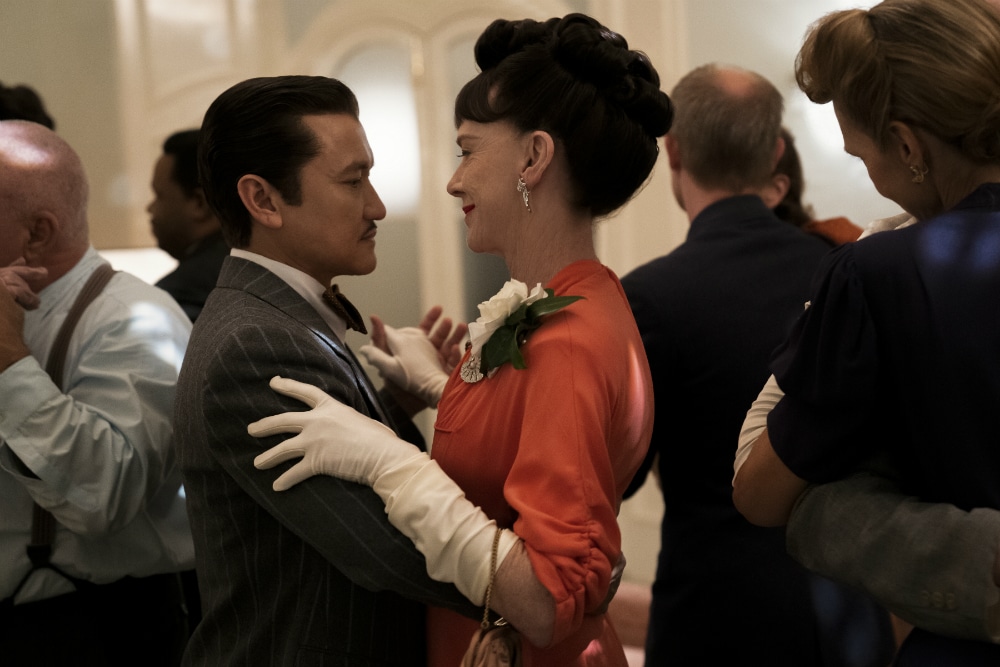 BT: Speaking of your son, Teo, what was it like working with him on screen? You had previously acted opposite your daughter, Isa, in The Assassination of Gianni Versace: American Crime Story, so did she prepare him for working with you in a professional capacity?

JJB: [laughs] That was so special. You know, I don’t have to teach him anything. When he was younger, he worked more than we did. I’m just very honoured to be on the same set as my son. I look up to him! He’s such a good actor and for him to be there, it was special. Being in a Ryan Murphy show, the set is like family. Everyone is so nice, so I was introducing my son to everyone and they just loved him. The set is my son’s natural habitat, he’s so at ease on set and he’s happiest when he’s on set.

BT: You said that a Ryan Murphy set is like family and of course you had worked with Ryan before, with Sarah Paulson and Jennifer Lynch before. Do you have a shorthand now in terms of working with them on set?

JJB: You know this is the first time that I worked with Ryan because he didn’t direct my episodes in Versace and also American Horror Story, so that it was nice to finally be able to work with him. People tell you that this is what Ryan Murphy is like, he’s a genius and so on, but once you have the first hand experience of working with him, you go “oh, everything is true and more”. He has vision, and the way he multi-tasks…he loves to multi-task. He’s directing us but he’s also on his laptop when they’re setting up and resetting the scenes, and he’s searching for images and other things for his next show, or a costume board will be presented to him for yet another show, and during a break in the take, he’d have a meeting with his artistic crew for another show. It’s like “how does his mind work?”. It’s amazing to work with him. He’s a genius. 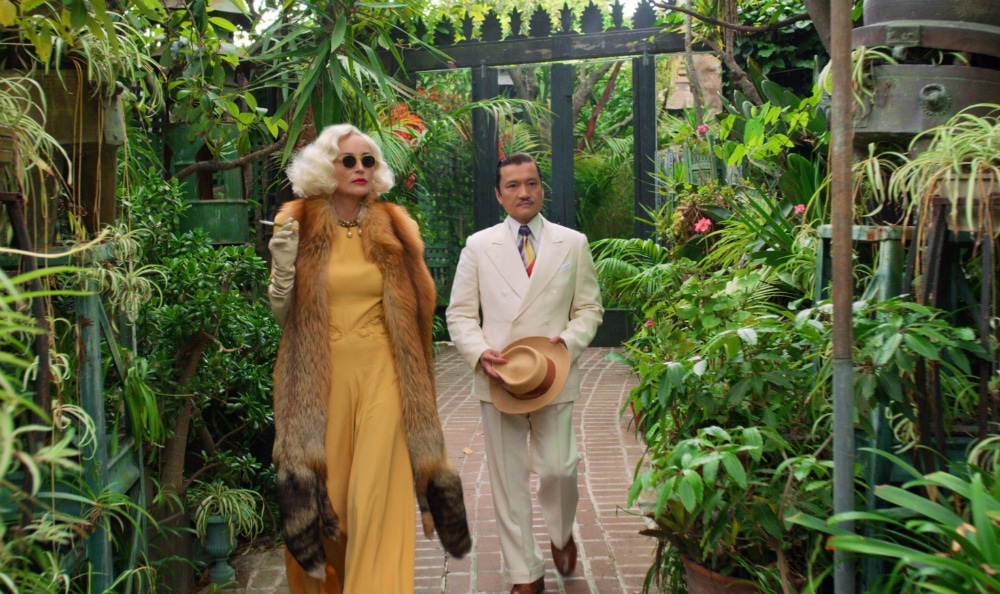 JJB: Oh, that’s hard. I had some scenes with some amazing women and men. My scene with Finn Wittrock was fun to do, and my scenes with Cynthia (Nixon) and Vincent D’Onofrio when I’m trying to pitch the hospital to them, that was great. And of course, the scenes with Sarah Paulson, I mean we were basically working together every day. It’s hard, I love them all.

BT: Tell me about your experience working with Sarah every day.

JJB: Sarah is the best number one actor on the call sheet. She’s the best leader on set, she sets the pace, she sets the tone, and also at the same time she brings the fun on set because she’s a funny person. She can lighten up the room if it’s becoming a long day and everyone’s tired, and at times she would treat everyone to a coffee truck, which was so good. [laughs] She’s so precise in her work, she’s well prepared, and her being an executive producer on the show took it to another level. She had to wear two hats when she was on set and she was always questioning things in the script, for example, just to make sure it was perfect. She remembers everything. When she sees something that’s off in an episode, because we have different writers, she’s on it, and all you can do is give her everything you’ve got because you know that’s what she’s going to give you. It’s quite an experience to have that as an actor because she’s so generous and such a giving person. 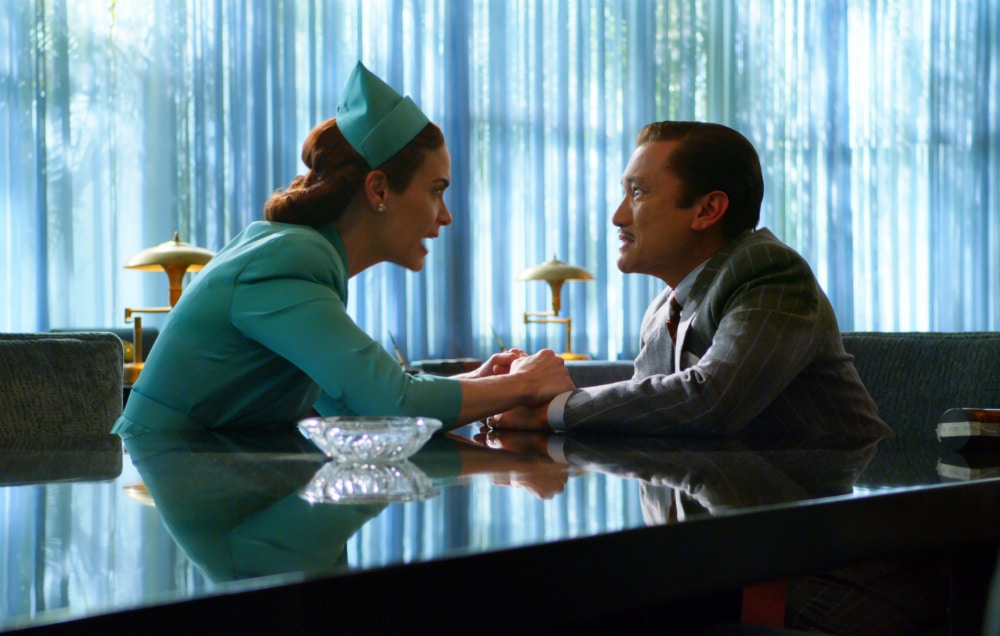 BT: Who have you worked with in the past that you’d like to work with again?

JJB: I enjoyed being directed by Matt Bomer, he directed our episode in Versace, and that was his first time directing. I was amazed by that and his attention to detail. It felt like he’d been doing it a long time. I would love to work with him again! 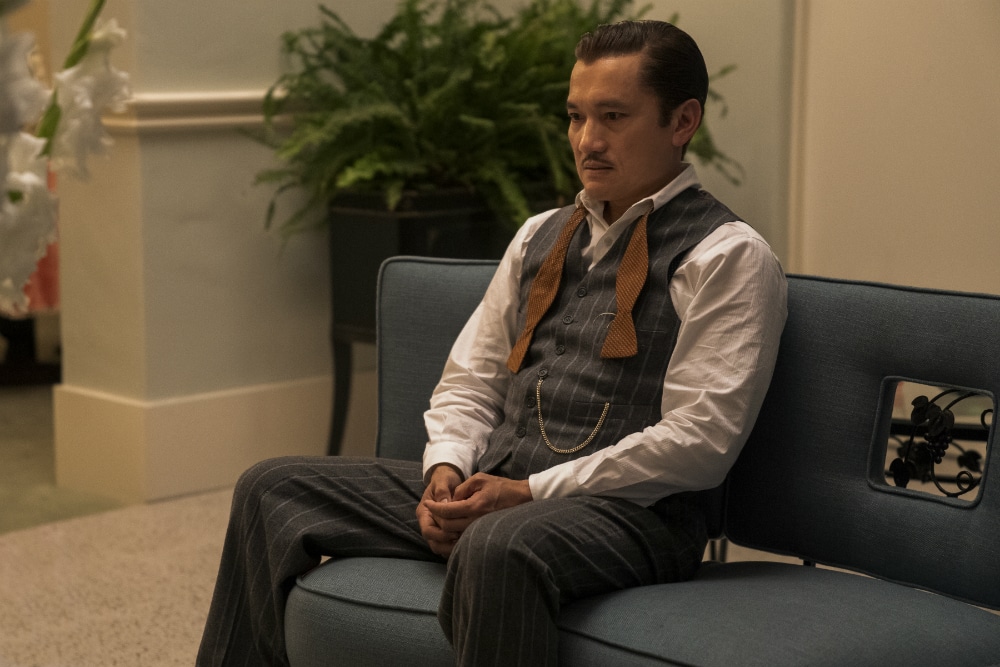 BT: What have you been quaranstreaming lately?

JJB: Mrs. America, Succession…we’ve been binge watching a lot of shows! There’s this one movie on Netflix that I want to watch, it’s written, directed by and starring a Filipino transgender actor Isabel Sandoval called Lingua Franca. I am dying to see that. 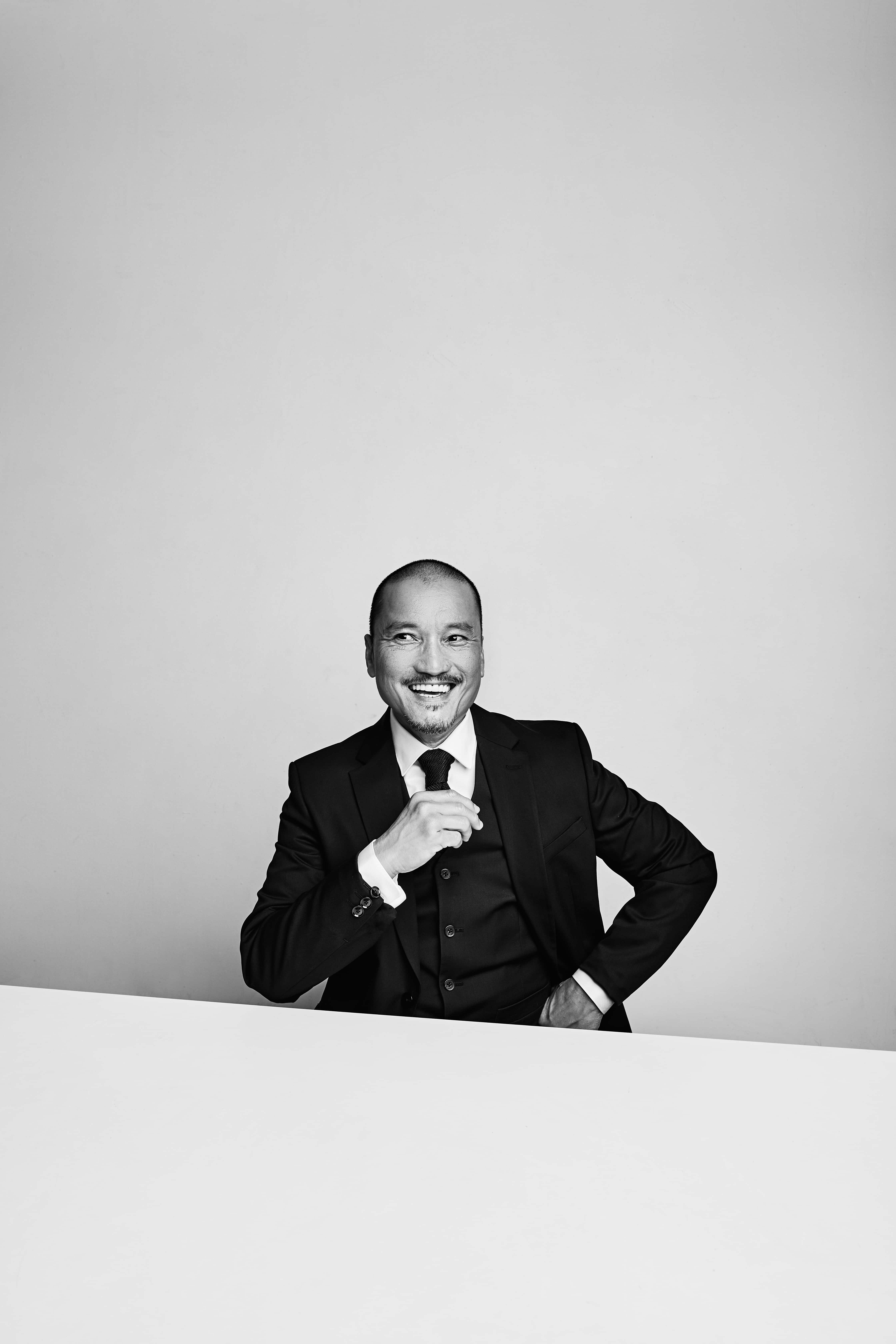 Ratched season one is now streaming on Netflix

Interview: The Devil All The Time’s Harry Melling