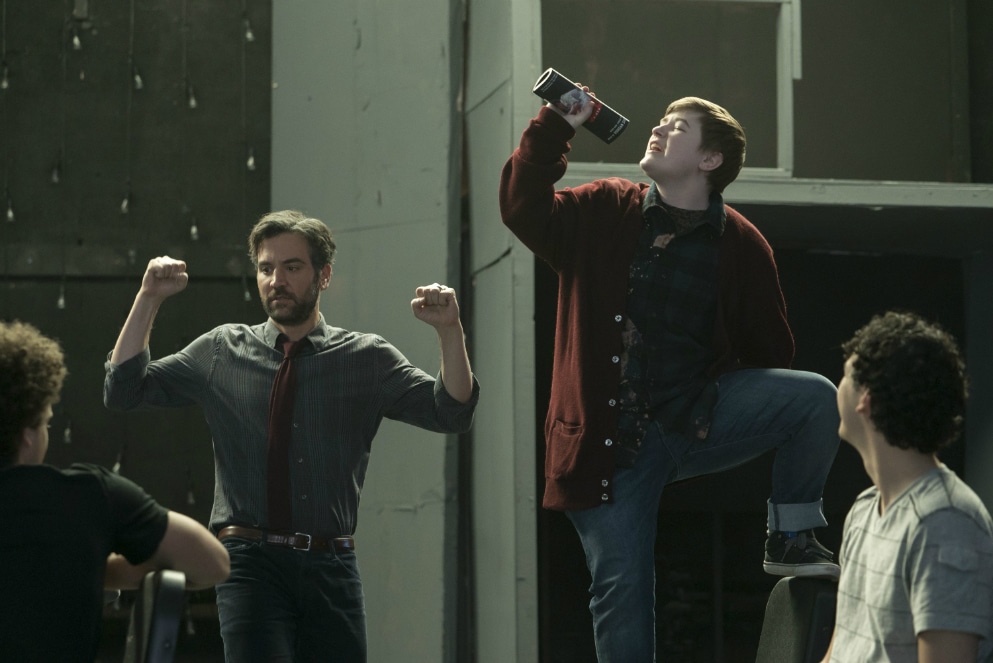 Throughout the Olympic games, and even afterwards, we watched previews for the series Rise, which intrigued us because of our passionate love of musicals and musical theatre. Once the show aired though, we were not expecting the seismic shift that is not only in tone, but also through the character of Michael, who is played by the incredible non-binary performer Ellie Desautels. The character is revolutionary, and not due solely to trans representation on a network television show, but because Michael is multifaceted and multi-dimensional (which is rarely seen on teenager-centric shows).

We spoke with Desautels by phone about the show, their role in real life, and of course about co-star Auli’i Cravalho, who portrays Lilette Suarez on Rise.

The following is a condensed and edited version of our interview.

Brief Take: What was something that has surprised you about Rise?

Ellie Desautels: I knew that the show was going to educate and Michael’s presence on the show was going to start conversations, but the reality is a whole different thing. From fans, who are telling me that they have parents that are homophobic or transphobic, I think actually learning how to accept trans people because of Michael, that’s huge. That’s very, very big. I expected it to happen with people who were sort of in the middle, not transphobic, but not totally accepting. But to have transphobic people’s minds being changed and helping them understand trans people and their lives and what they go through, that’s very big and I didn’t expect that, so that’s been the most surprising.

I knew that it was going to be happening, but for it to be happening now, is a whole different thing. Its job is changing conversations, starting conversations and getting people to better understand trans people. And you don’t feel pity for Michael, the way he was raised, and because of the way I portray him, you don’t feel that for him, because he’s a person and he takes control, and he knows what things need to happen for him, and how to get those things to happen for him, and to just be normal. He’s very much like “this needs to be normal”, and I think that has shocked certain people that trans people are normal people. *laughs*

BT: You recently said that you’ve learned a lot from watching Auli’i Cravalho perform. What were some of those things?

ED: When we watch the episodes, she’s sitting in her seat, cringing whenever she’s on screen, and she just doesn’t know how good she is because it’s her first time screen acting, especially since she’s not used to seeing herself on screen. Maybe the little things that people would hardly notice bother her, so she gets all cringe-y. But she doesn’t know, if she can see past that, how brilliant and how natural she is on camera. When I watch, that’s part of my education as an actor, to watch films and study the actor’s behaviours. Now I do that all the time. And watching her, and watching the show, I really pay attention to everybody and study, basically. When I study her, I pick up little things, like she took time saying her lines, like actually thinking about the circumstances and situation she’s in before answering, or her little “uh-huhs” are really nuanced. She’s so dynamic and I’ve learned so much from watching her, she’s just a natural.

BT: On Twitter, during a recent episode you wrote “Trans friends who were just triggered by the scene, if you need to reach out, my inbox is open for you. I’ll check them after the episode!” What has the response been like?

ED: Amazing! I try to answer every DM while I can, while I still have…not a *tiny* fan base, but compared to Auli’i’s, it’s small. While I have a few people reaching out to me, it’s every day, and I try to answer them all. The responses have been so overwhelmingly beautiful. People are telling me that they love me and those words are so crazy to hear from people who don’t even know me, that they have a place in their heart for me. That’s overwhelming, but in the best way. I have had people tell me that Michael and myself have given them confidence in theirselves, and given them confidence to tell their families and their friends if they are trans, to tell their teachers if they are trans. They feel safe and confident to tell people that they are trans because of me, because of Michael, and that’s just amazing! I can’t put it into words.

BT: On Rise, your school is performing Spring Awakening. Do you have a favourite musical?

ED: I have been saying that my favourite musical is Shrek: The Musical, because it’s really great and well-done. But actually last night, I was talking online to my fans, because that’s a question that comes up every time, and somebody asked me again, and I said “Wait a minute, my favourite musical is She Loves Me“. I don’t know why I didn’t remember that, it was the first musical that I crewed in college. I wasn’t a theatre major yet, I was a music major. I think that She Loves Me is my favourite musical. I am not too familiar with Hamilton but that’s by choice. I will listen to it. One of our cast-mates Tiffany Mann is in Jerry Springer – The Opera, and wow! What an absurd musical, but very, very smart.

BT: What can we expect from upcoming episodes of Rise?

ED: Getting to episode 5 has really solidified the show, now it’s a show, and we’re really starting to know these people. It’s just going to keep going from here. For Michael, you’re going to get to see him revisit this friendship that slipped through the cracks, and his friend begins to go through this difficult situation. And through that, together, they rekindle their friendship, and he finds his role as having to be her rock and having to be her support, because she doesn’t have much. I’m really excited for that, because it doesn’t have anything to do with Michael being trans, it shows this real story that this kid goes through with his friend, and it’s normalizing even more the transgender narrative. That’s a really exciting story that I am ready for people to see, but there are many more beautiful stories for people to see, other than Michael’s. I am just looking forward to moments, like people like to talk about Lilette and Robbie, but Lilette on her own is really going somehwere. And her acting again just blossoms, and you get to see again the amazingness of Auli’i, and it just keeps getting better.

The Nightingale and Other Short Fables Review