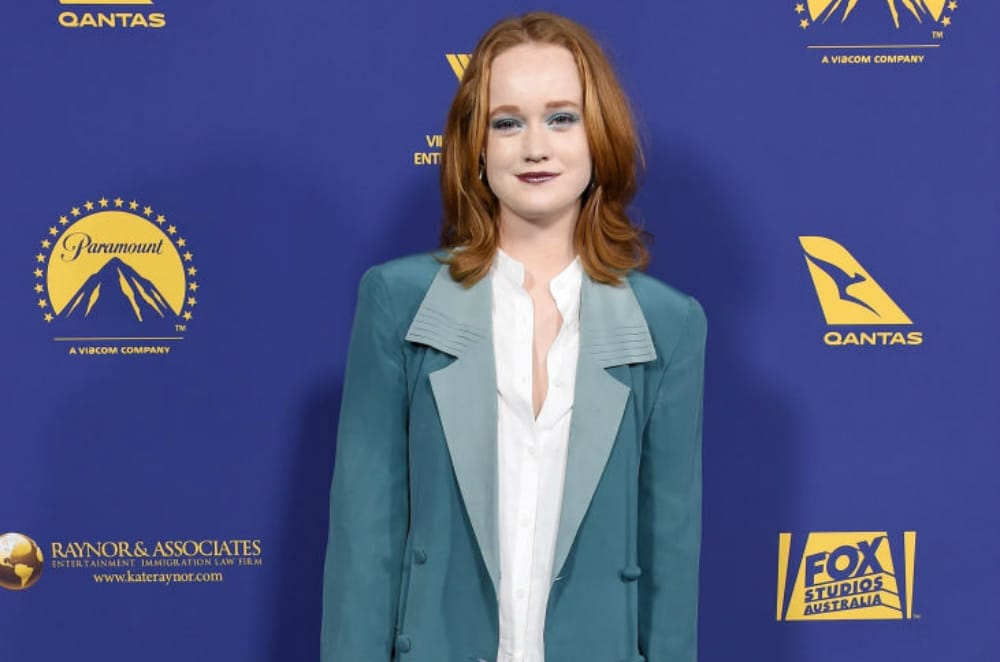 As much as I adore Drew Barrymore and Timothy Olyphant’s Sheila and Joel Hammond on Netflix’s Santa Clarita Diet (and they are pure #relationshipgoals), it’s Liv Hewson’s Abby Hammond who’s my undeniable favourite on that show. Whether Abby is plotting with Eric (Skyler Gisondo) or helping her parents, Hewson is always a delight to watch. Ahead of the season three streaming premiere, we had the exciting opportunity to chat on the phone with the multi-talented actor, who was busy filming the upcoming Netflix film Let It Snow in Toronto.

The following is an edited and condensed version of our fun conversation with Santa Clarita Diet‘s Liv Hewson.

Brief Take: Hi Liv! As a proud Canadian I have to ask, how’s Toronto been treating you?

Liv Hewson: Really nicely, it’s been great! We’ve been here a month now, I think, and we’ve watched the snow melt. We came when it was snowing and now it’s all melted. But it’s beautiful! It’s my first time on the East Coast of Canada and I’m really enjoying it. I’ve been having an awesome time.

BT: When I spoke with your Let It Snow co-star Isabela Moner recently, she mentioned that it’s great to be around people her own age on set and it makes that set quite a unique atmosphere.

LH: Aww, that’s awesome! Bela is super cool and she’s right, it’s been a really fun group to work with. It’s a big cast, so there’s lots of us, but it’s been really fun.

BT: Let’s talk about Santa Clarita Diet. I quickly binge-watched the six episodes I was sent and already I think this season is the strongest so far. It’s been great seeing Abby’s progression over the three seasons and now really seeing her blossom.

LH: I completely agree with you. I think every year we have more and more fun with it and the writing gets stronger and quicker and crazier. We’re just so lucky as actors on the show, we’re given opportunities to tell very human and loving stories, but also do crazy shit with corpses, you know? It’s the best. We’re like kids on the playground. This season in particular, I’m really excited about it. I do think it’s our best yet, I agree. 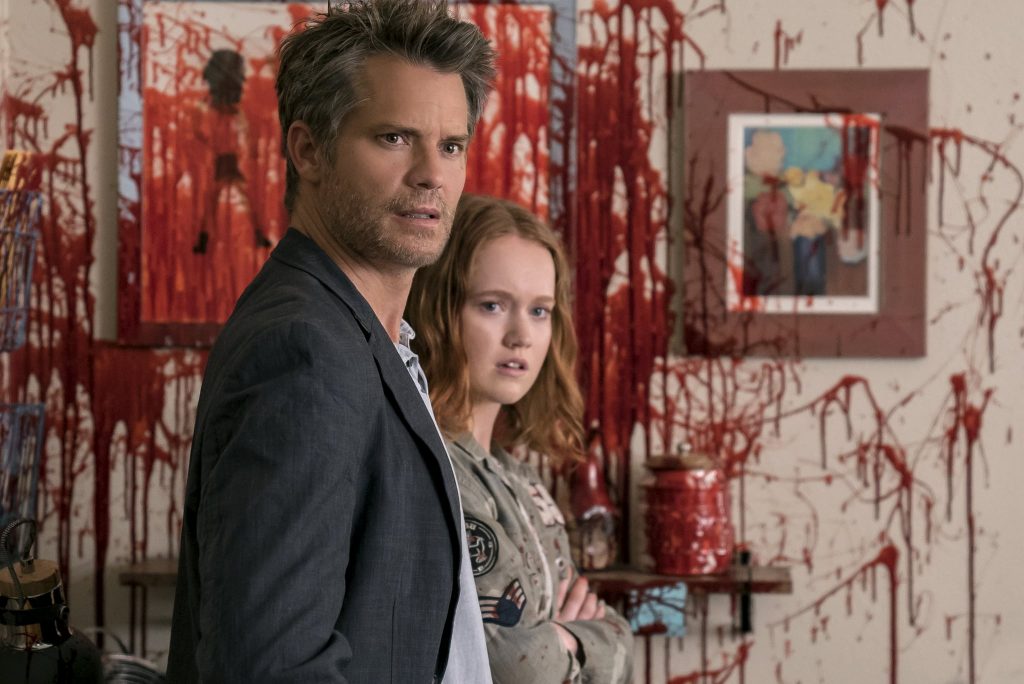 BT: What have you liked best about playing Abby?

LH: She is so fun because she’s so quick and dry. You know how you have a spat with someone or have banter with someone, and then they leave and you come up with all of these one-liners you wish you were able to say at the time? I feel like Abby is the kind of character that has all of those one-liners just ready to go at the time. So to be able to play someone that is that dry and that sarcastic in the moment is just great. This is a great season to be playing Abby Hammond. It’s big, bad Abby time. [laughs] It’s funny, Victor (Fresco) the showrunner and some of the producers and I had spoken about Abby’s development and said it was like a superhero origin story. She’s a teenager and this is her discovering her super powers, this is her coming into being capable enough to take care of her family and deal with the violence.

BT: That’s so interesting! That gives me a whole different outlook on Abby’s development during the course of the show. Now I think I speak on behalf of many fans of the show when I say that Abby’s scenes with Eric (Skyler Gisondo) are some of the best scenes, period.

LH: The dynamic between Abby and Eric is very much like partners in crime. They care about each other so much and they have so much fun together, even in the face of the supreme danger that they’re in. Skyler is so funny and so on top of it, I just have the best time working with him and building that dynamic. 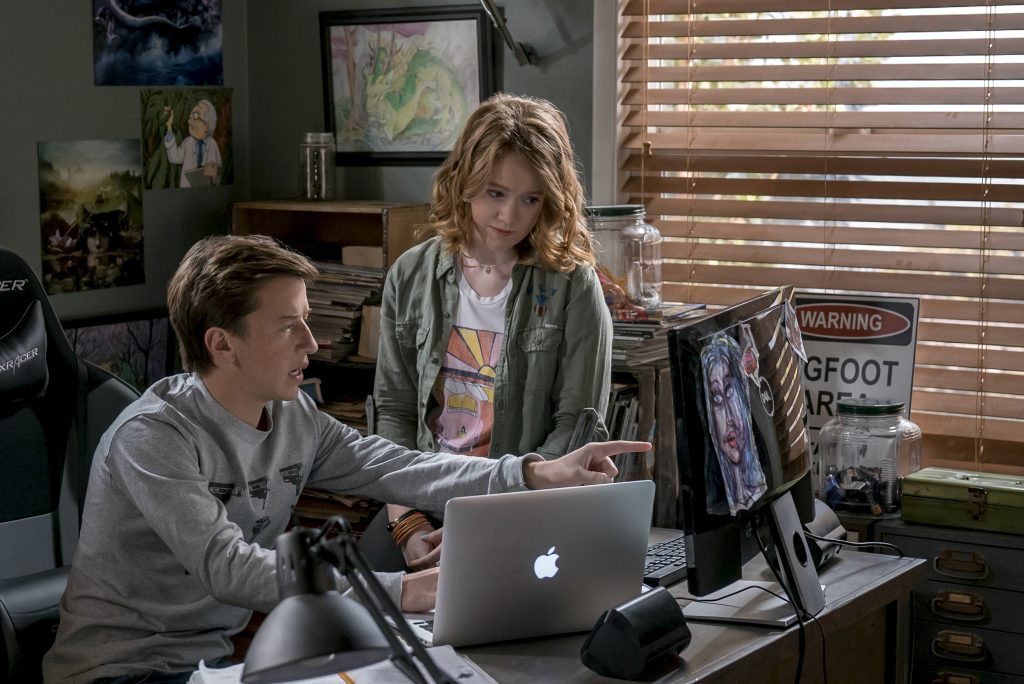 BT: Your scenes with Drew Barrymore and Timothy Olyphant are a lot of fun too because the Hammond family unit has gotten much stronger this season as they become much more communicative with one other.

LH: I’ve always said that it’s a show about a family who loves each other very much, and also there are zombies in it. Drew and Timothy are amazing actors, obviously, and they’re amazing people. The environment that they create on set is one that’s very playful and collaborative and kind, and it’s a joy to show up to work on that show every day. So much of that is a credit to them as leads and the energy that they create in bringing those characters to life.

BT: Of all the scene partners that you’ve had in your career so far, who has really impressed you on set?

LH: Oh man! When I started acting, I started in theatre and the woman who was my mentor for the longest time, she always said that “it’s your job as an actor to make everyone else look good, and then if everyone is doing that then everyone looks good”. When I show up to work, that’s what I try to do. Your performance is in service of the project and everyone you work with, so my favourite scene partners are people who also have that attitude. I’ve been very lucky with working on this show because that’s what we’re all doing. 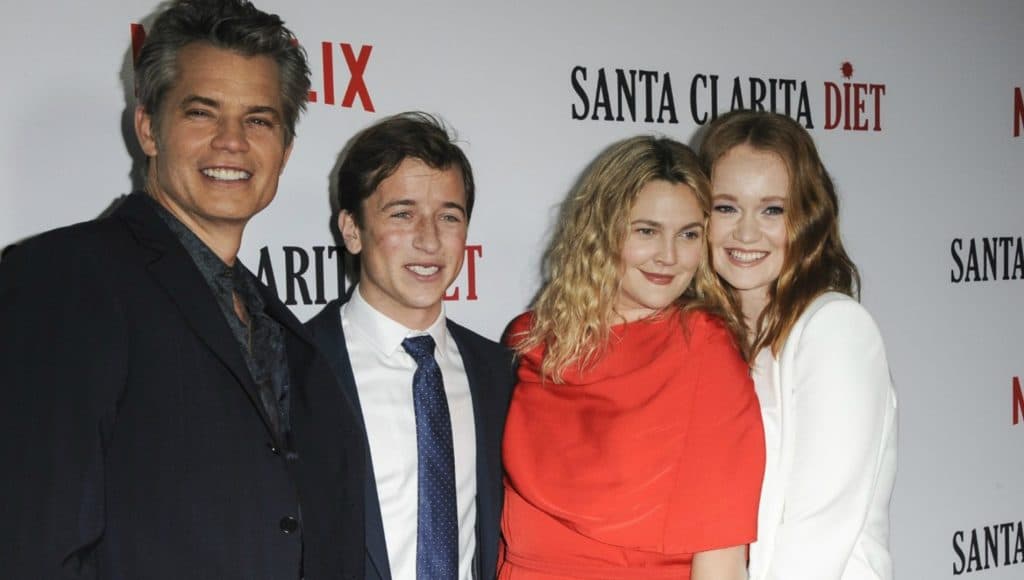 BT: As a playwright, performer, and someone who has worked in different mediums, who inspires you?

LH: In my daily life, I’m most inspired by my friends. I have friends who are writers, directors, stand up comics, musicians, and being able to enjoy the work of my friends and enjoy them as people, that just gets me jazzed. In the industry, there are people who I’ve looked up to my whole life, performance wise. Cate Blanchett is someone I would watch and think “holy crap! I would like to do that”. But I think I tend to get married to single performances or single images, so I’ll see something and go “holy crap!”, and I’m always chasing that level of excitement.

BT: Is there a performance that you’ve seen recently that gave you that feeling?

LH: This isn’t necessarily topical, but I just started re-watching The Sopranos and I”m almost halfway through season one now. I just can’t stop staring at James Gandolfini’s face! [laughs] So I’ve just been thinking about that all week and his performance has been on my mind.

BT: What have you seen on Netflix recently that you’ve really liked?

LH: I’m just watching The Umbrella Academy actually, I’m really behind. I’ve been watching that while we’ve been filming here because that filmed in Toronto, so knowing that’s from the same place is really cool. I also really like watching stand up on Netflix, so they have my favourite specials that I’ll return to, like John Mulaney, Ali Wong and Maria Bamford. So that’s really comforting to me – watching stand up on Netflix.

BT: You just filmed Jay Roach’s Roger Ailes movie with Margot Robbie, Charlize Theron, Nicole Kidman and Kate McKinnon. That cast and crew, from the top down, is just mind blowing! Tell me about your experience being a part of that production.

LH: It was crazy! It was so fun. I had to pinch myself a few times. I was really lucky in that my character and Brigette Lundy-Paine’s character work together very closely and the two of us knew each other before we started filming. So that was a godsend, honestly, because we got to work together as friends already, and so whenever we couldn’t believe this was happening, we could just stare incredulously at each other or grab the other’s arm. “This is happening, right? we’re both here? We’re both seeing this and in the room together? Awesome”. [laughs] Honestly, it was a dream. It was such a great environment and Jay is such a great director and a kind, creative man. I mean I can’t wait to see it! I’m totally jazzed to see how it turns out.