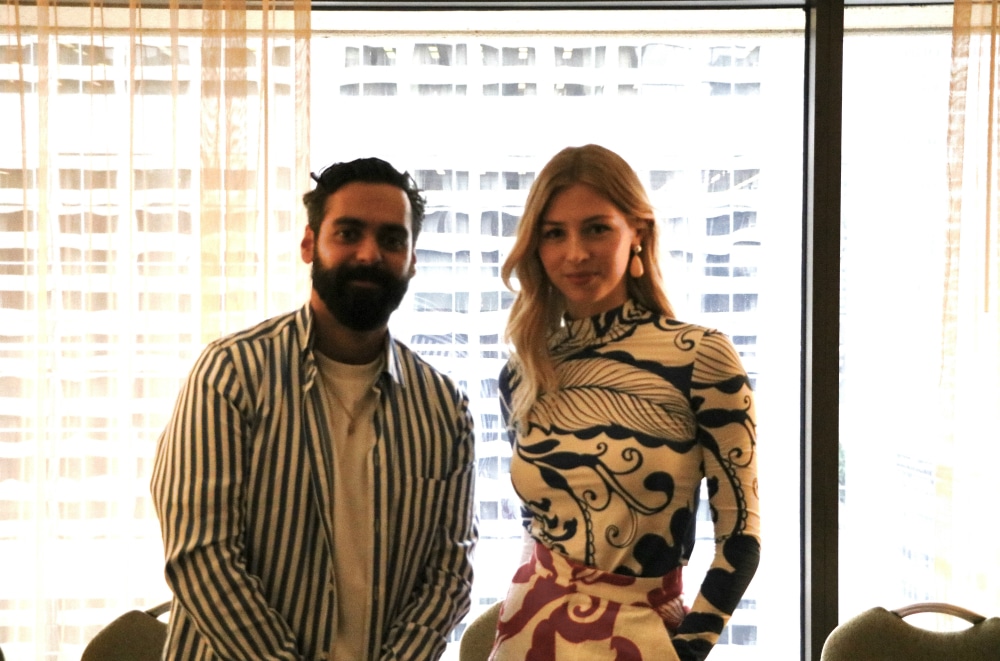 Gunpowder & Sky’s sci-fi label Dust is going to be hosting the first-ever live stream premiere of a movie followed by a Q & A with the film’s cast and director. TIFF World Premiere Sea Fever feels like the perfect film for which to be the kickoff to this new way of life. As the film is very much about exploring the unknown and is entertaining to boot (and female-driven!), it makes sense to have the film’s stars Connie Nielsen (who we sat down with at the festival as well), and breakout star Hermione Corfield (Star Wars: The Last Jedi, Mission: Impossible – Rogue Nation) to participate.

We remember the day we sat down with Corfield and co-star Ardalan Esmaili in September. As it was a rainy day, it felt appropriate for this particular junket, and after we interviewed the pair at a downtown Toronto hotel, we happened to run into Corfield again in the lobby, (by chance, we swear), and she gave us a friendly wave as we departed. Her role as Siobhán in Sea Fever is immersive and quite surprising for a gregarious English blonde to play a redheaded Irish introvert, but that’s how transformative her performance is. Corfield will next be seen in Renny Harlin’s The Misfits, but do not sleep on Sea Fever, it’s an incredible film.

The following is a condensed and edited version of our sit-down chat with the delightful Hermione Corfield and Ardalan Esmaili of Sea Fever.

Hermione Corfield: Yeah! I did a stunt on the rooftop opposite the Shangri-La. I don’t know what the rooftop was, I was originally going to jump off a crane, but we didn’t have time to do the shot.

HC: Yeah. But we didn’t do that. A shame really.

BT: We may even be looking right into the Shangri-La hotel right now.

HC: Oh really? Oh God, I think I’ve messed up, maybe it was there.

AE: Holy shit. I’m glad that you didn’t jump from that crane. [laughs]

BT: This was a phenomenal film. It was funny and scary, but also deep. What did you enjoy most about making it and what did you learn from each other?

AE: I had so much fun doing this film, it became a small family out there in Ireland. The whole cast and Neasa and the DP (Ruairí O’Brien) and the crew, they were just fantastic. It’s an amazing environment in which to be and that’s inspirational enough to do a good job [chuckles] and be there and want to be there and shoot because there was no stopping us, I can do 20 hours a day [laughs] because it was fun and that’s the thing that I take with me.

HC: And it was a nice small set as well, it was very compact, so you were kind of all on top of each other at all times and it felt kind of like a family. You’re all in that enclosed space and everyone wants to work hard as well, and everybody was nice, and that sounds so boring but you normally have egos on set and it was just everyone was there for the right reasons and willing to work super hard. 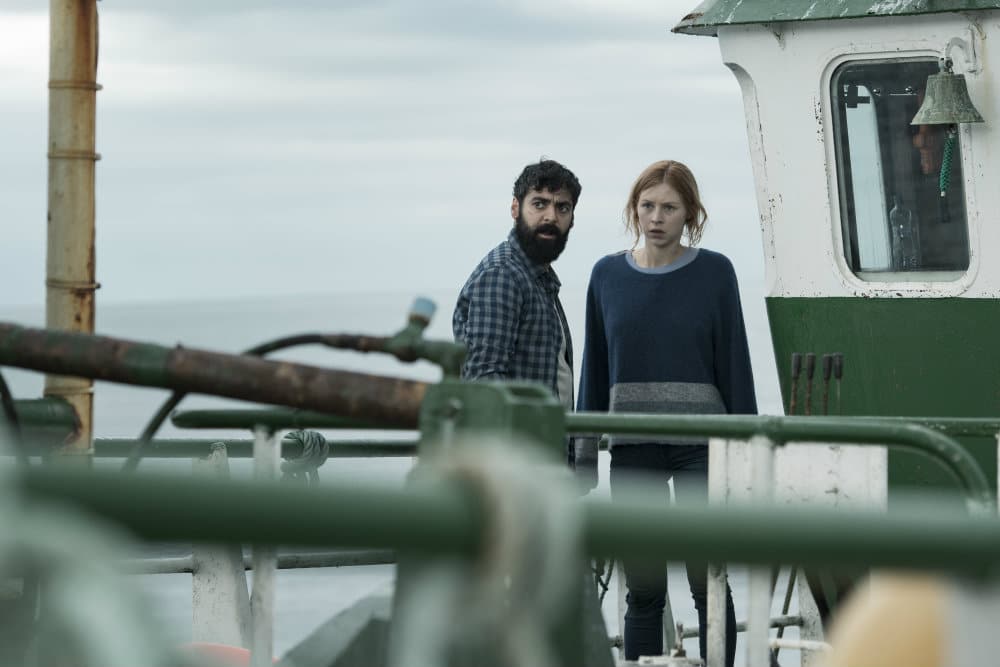 BT: How much did you enjoy leaning into the Irish element?

HC: Really, yeah, good! I enjoyed it, actually, I loved the accent. I had, at the beginning, because the only people I know who are Irish are incredibly charming and warm and open and friendly, I found it quite hard to marry the two, as in the character and the accent, because to me it screams that warmth and she’s not like that, she’s actually very introverted and seemingly cold, but really just shy, but the accent itself I loved, but I found it tricky at the beginning, trying to meld the two.

BT: How much did you embrace the metaphor of the film of the fear of the deep and of the unknown?

[Slight pause, turn to each other and laugh]

HC: Yeah, well I think so [chuckles] well she [laughs] I think that she’s definitely like…it’s the complete unknown for her, because she’s never before been on a trawler and it’s a whole group of unknown, new people. For her, actually, the sea and the creatures are probably more…at the beginning, that’s something that she probably knows better, and she feels more akin to nature, really as opposed to human beings. So yeah, the unknown shifts from the people on the boat, to whom then she becomes close because she becomes useful, then that turns into the fear of the creature, obviously, and that explodes into the story.

AE: I was more into…my character’s point of view is this type of survivor guy. Because the backstory of it, Neasa and I talked about it, where he is from and what he has been through and stuff like that. For me, it was a survivor that has seen pretty horrible stuff in his life and had to leave things behind him, and he’s just there trying to survive. There’s this question: “Why don’t you have a better job?” but he has no choice! [laughs] He’s there, he’s educated and all, but he’s stuck on the boat because he needs to feed his family. For me, that was the main reason that I wanted to do the film, was this survivor guy. Because those people that flee the countries, they’re all survivors, even those who die. They’re survivors, they try everything to protect their families, and that was the story for me. 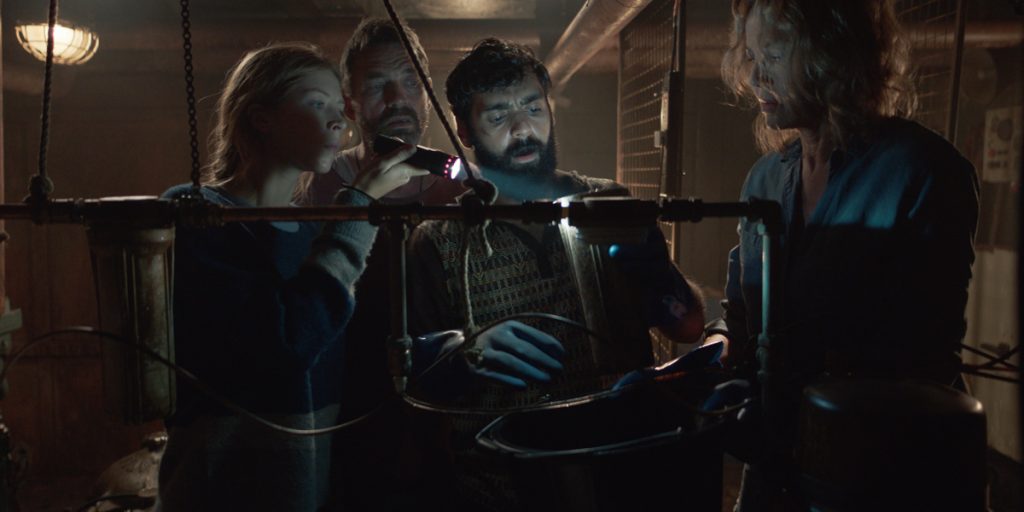 BT: This film was female-driven at every level. Do you think this translated into a certain sensibility for the film?

HC: I think so. Someone earlier asked if it was meant to be set up like a matriarchy, like a three generational matriarchy of the women taking charge and making decisions. Although by the end, we’re really making decisions together and become a team. But the women do tend to be the ones that take action. With Dougray and Connie’s relationship, in it, Connie’s the one that sort of…he secretly calls the shots when he betrays her, but I think that for the majority, she is the one that is steering the boat, as it were. [laughs]

AE: I agree, and it’s not about being female, but having Neasa there as a skipper…

AE: That’s an actor’s dream, that you have someone so intelligent and so aware of the story and so passionate…

AE: …That you can just do your job as an actor and not take responsibility for other stuff, because she has everything all set for you.

HC; I think because she wrote it, she knows that world inside out.

BT: Sea Fever contains elements of horror to it, but there is a distinct message of attempting to overcome fears. Do you have any horrors that you have overcome?

HC: Horrors, oh gosh! I think that both of us are scared of flying. [laughs] I used to be terrified of flying, I used to hate it, but I always have vertigo, so I don’t acclimatize to heights. But now I’m fine on flights so that was probably it, the fear of the unknown. I think that it comes from wanting to be in control and not knowing…if I knew how a plane worked, like worked, I would probably be fine. But flying now, I’m not scared any more.

BT: Hermione, you mentioned the intimacy of the set, and you’ve been on some of the biggest sets in the world. What do you think should be an element that is mandatory on sets, especially motivated by this experience?

HC: [Immediately] Trucks selling smoothies, giving us smoothies. No, I’m joking! [laughs] No, but you do get that crap on the big films, you get the massive catering things, but I think that’s the perk, really. I personally think that a really good director, no matter how big or small the set is, makes it feel like it’s you guys working together on something, rather than being this huge thing, like: “Oh my God, you’re on this massive film set”, rather than, you know, you don’t want that, you want it to feel like it’s just the actors and the director and the DP, but the outside noise isn’t there, because really, the more you feel like that, the more free you can be and the more safe you feel, you feel that you can take more risks.

BT: After viewing the final project, was there anything that surprised you after you watched it?

HC: The cutaway shots to the sea and to the pulsating jellyfish with the churning water, I didn’t know that was going to be a factor, so that surprised me because it made it more dream-like. I don’t know, in my head I thought it would be actually bringing in those moments, but it made you stop and think a little bit. Also [chuckles] I did some blue screen in which I was in full scuba gear balanced on a rock pretending to swim and actually, it looked great! [chuckles]

AE: And you weren’t in the water?

HC: No! I was lying like a beached whale on a block of wood. I actually did lots in the water itself but for pick-ups.

HC: It was amazing, it really looks like I’m in the water swimming.

BT: What’s something that you enjoyed about the aesthetic of the film and what you might bring into future projects as well?

HC: God! If we were directing? Oh God! Well I loved the use of space. I loved the travelling shots, like up the ladders and again, it plays into the space in the sense of claustrophobia, I thought that was really cool. And also the set was really cool, [gesturing to AE] I mean your engine room was beautiful!

BT: Would that be a consideration one day? Would you enjoy being the captain?

HC: Absolutely! One hundred per cent! I think that I would have to shadow Neasa for about five years before I think I’m ready, yeah.

AE: I mean, Neasa, when I was sitting next to the bed, right next to Sudi (Elie Bouakaze) and talking to him, in that scene, Neasa broke her foot. A dolly just ran over her toes.

HC: I forgot about that!

AE: She’s all about what’s happening on the monitor. And she didn’t cut. And she’s like: “CUT, I think I broke my foot”, [laughs] She’s just so…that’s the kind of director that she is.

BT: What will you take with you from this experience?

HC: Definitely the friendships. I haven’t had an experience like it, in which you step into a set and with the actors you just immediately gel,  so you don’t have to work really hard at those relationships, because everyone’s bringing this amazing essence, and as a result, the group scenes were kind of…we all bounced off each other and our scenes were so easy. It was all really fun and easy.

AE: It was a walk in the park.

Sea Fever is available On Demand and on Digital on April 10. The first-ever live stream premiere event of the film will take place on https://seafever.watchdust.com on Thursday, April 9 at 5:00pm PT / 8pm ET.  For a small pay-per-view fee, fans can tune in to watch the official film premiere together, post their comments in a chatroom, and have their questions answered by the cast and crew via a moderated Q&A following the credits. 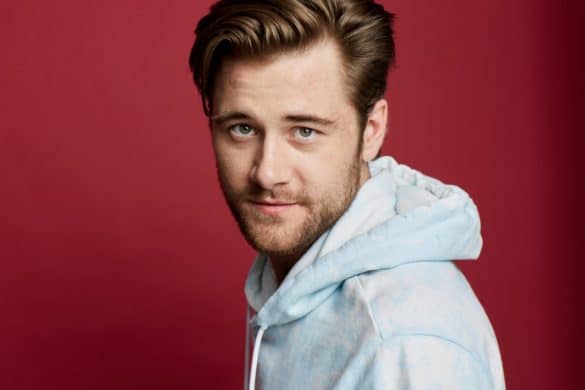