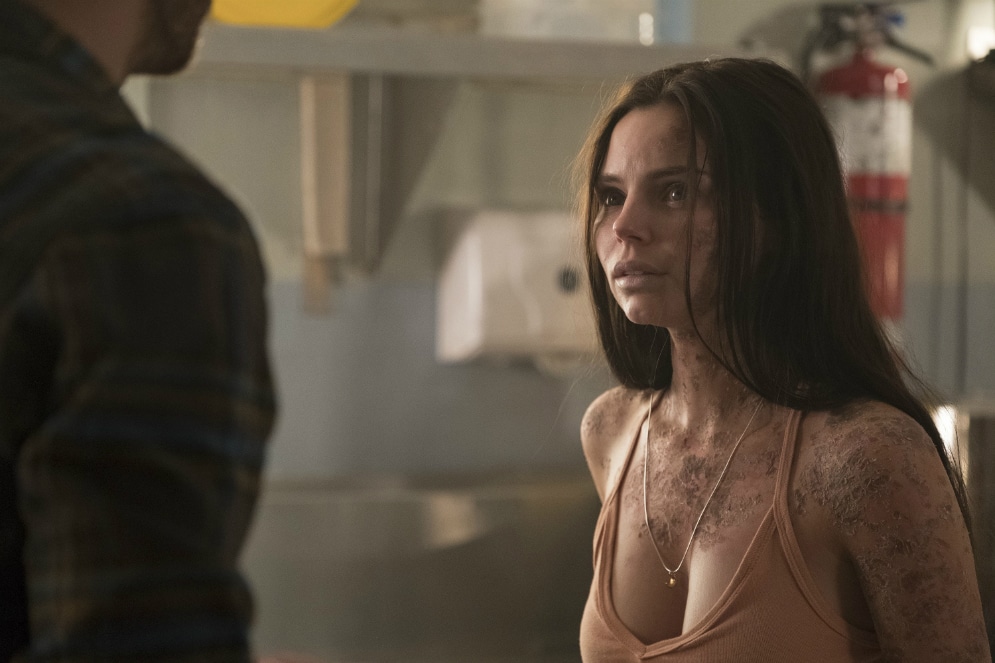 Speaking with Eline Powell of Siren brought a unique opportunity, as I have probably not spoken to someone as committed to the craft, but with such an interesting set of observations, and, I noticed on the playback, quite self-deprecating. But the actresses’ dedication and talent brought with it a fascinating series of answers. Our conversation began with a discussion of Maggie Betts and her film Novititiate, in which Powell is a revelation as Sister Candice, and continues in a deep dive into the series Siren, in which Powell plays the lead.

It is my pleasure to present a condensed and edited version of our interview.

Brief Take: What did you like best about working on the film Novitiate?

Eline Powell: Margaret [Qualley] and the other girls were the first American actresses with whom I had worked. It was my first job stateside. I was blown away, they put so much passion into their characters, they really take it seriously. Yeah, I loved their performances in that. It was a whole female ensemble, the director, the DP, the producers were all female and I’d never worked like that before. It’s not majorly different but it’s definitely unique. It was wonderful and really cool.

BT: How did you prepare for this very physical role?

Eline Powell: I’m not going to lie, it was actually one of the things that I loved most about being able to play Ryn was being able to work so physically and then be so courageous with it. When she first goes on land, she’s never been on land, so she doesn’t know English and there’s a need to communicate physically and I also need to make her a believable human, that was immensely important. I watched tons of Blue Planet. [laughs] I watched amazing shows with predators being on land. Sometimes I think it might be hard to create swift movement on land, so I thought a lot about how she would just swing. I thought about how she swims in the water and how would that posture translate on land, which is why she looks quite weird, even in her natural state. And then the eyes were such an expressive thing both in land mammals and sea mammals, like the great whites were really interesting, but also cheetahs and leopards, like if you stare, or whether you blink or how you move your head. Cheetahs can do that really quick thing that makes you a little bit scared of them. Also, I loved creating these different movements and playing around with those. I looked at the Icelandic singer Björk and how she moved around, I’m such a weirdo! I definitely had fun.

BT: Do you think of the character as animal? Human? Both?

EP: I’m glad that you asked that question because I feel quite jumpy about calling this character “animalistic” or saying “she’s more human” or that. It implies that humans are the best species or the more intelligent ones. I think it’s great you asked that, because me, as Eline, I sometimes feel, I don’t know if being more human or more animalistic is better or worse. The way that we treat animals sometimes, I don’t know if you can say that is the humane way or inhumane way. I think that Ryn thinks of herself…I don’t know if she has quite a concept of “human” as opposed to animals or not. Either way, I think that she definitely grows to appreciate the human species more and fully goes along with those terms and becomes more human. As Eline, I think she’s wild and more instinctive, she’s animalistic, though I think in the best sense of the word, in the instinct that she’s not able to manipulate. She’s animalistic in the best meaning of the word.

BT: Did you bring any of your additional talents to the role?

EP: For singing, yes, I sang on set. I came up with a little Siren tune, but then I found out that they made a sound for it, which I’m hoping it’s not the case of my voice, but I think it’s more because they want to create something that maybe a normal person created, something unique and special. Sibongile Mlambo, who plays Donna, another mermaid, has been a huge helpful factor. She also has a bit of a darker background, and she honestly she brings this raw physicality to it and a little bit different too, which is great because us humans walk very differently. She’s a little bit different in movement because of her dancing background, and it probably helps her with me. My biggest contributing talent with languages is when Ryn was learning English, even though she’s highly intelligent, I didn’t want her to be perfectly copied, like a parrot or she would start to sound a bit like an A.I. or an alien. Not quite real. So I wanted to find a slang or lilt or an accent so I tried out a few things, and I quite liked this one particular thing in Icelandic, the way Björk speaks, they have a quite a breathy pause after every consonant. That’s not the whole Icelandic accent, but it’s an aspect of it, and I thought it was so brilliant because Ryn uses breath a lot to be expressive. So I tried to put in that little trait of the Icelandic accent in it so she’s not pure American and not too quick at picking up that sound so that she’s not understandable.

BT: Your character Bianca on Game of Thrones is a member of a troupe of actors, and here, Ryn is sort of prefaced by a play as well. Did you draw that parallel?

EP: No, it’s a great parallel that you’ve drawn there! I haven’t quite realized that because I’m always sort of portrayed in a parallel or portrayed in a play somewhere. The only parallel I draw to Game of Thrones is that I’m often in my birthday suit in the show, although handled very differently. Nothing to make you uncomfortable. I loved working on Game of Thrones as I’m a huge, HUGE fan of the show, so when I got that job, I was so happy. Honestly, they all treat each other like family, and they are the nicest people with whom to work. It was clearly one of the best jobs I’ve ever had. This is the number one, of course. [laughs]

BT: This is a very mature show as well.

EP: It’s definitely branching out and trying to explore that tiny bit older audience and young adult audiences are ready to adapt. Audiences get so much choice in TV shows now, and it’s tough competition to create something that goes across lots of different ages. What Freeform has done really well with this show is it’s not afraid to go dark and mysterious but it’s still very sophisticated. I’m so honoured to be a part of Freeform at a time like this with this show. Women’s stories, feminist stories, but environmental issues too, the way we are with animals and with outsiders, humans tend to do a lot of “us vs. them”, even when there isn’t an “us vs. them”, there’s only an “us”. I think it’s quite cool because I don’t think Siren is trying to save the world with one particular message, but we are definitely playing on a variety of things that most young people care about.