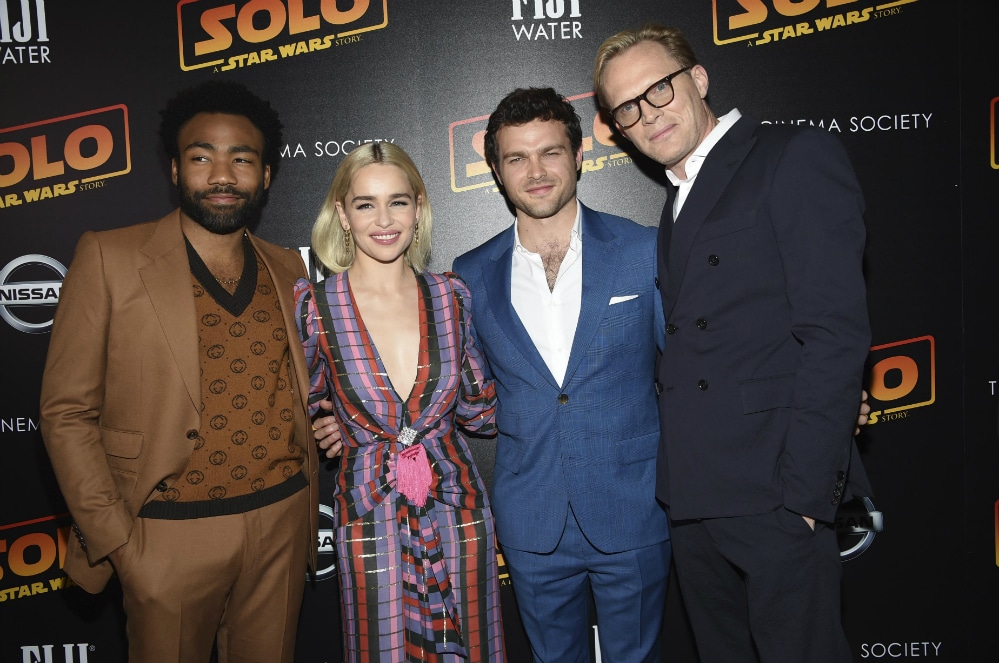 I’ve been an avid supporter of Paul Bettany as an actor ever since he first graced the screen in A Knight’s Tale. Even opposite Heath Ledger, one of the greatest young actors of all time, I couldn’t keep my eyes off of Bettany and his mesmerizing portrayal of Geoffrey Chaucer in the feel-good movie. From then on I followed his career closely, even attending the world premieres of his films Creation and Shelter (which he also wrote and directed) at the Toronto International Film Festival in their respective years. This year he appears in two of the biggest summer movies – Avengers: Infinity War and Solo: A Star Wars Story – and I predict that he’ll be one of the best aspects of both.

I had the exciting opportunity to sit down with a small group of local journalists recently to chat with Paul Bettany about his role as the mysterious Dryden Vos in Solo. The following were the questions I asked the writer/director/producer/actor in the roundtable interview session.

Brief Take: I think it’s safe to say that you’re now Ron Howard’s muse. Step aside, Chris Hemsworth! Having worked with Ron several times now, do you two have a short-hand when working together on set?

Paul Bettany: Ron is as close to family as you get in this business. He’s been putting his hand out and helping me for twenty years and I love him to bits. The really great thing about working with him, well, that’s a long answer. All that shit that you say about directors, that they’re collaborative and all that stuff, which, in this circumstance, happens to be true. I would lie if it were not true because it’s just something that you should say. But his ability to stage difficult scenes? As someone who has tried to direct a movie myself, to watch him see me struggling and go, “oh I can solve this if I move this here and moving this around”. He is just phenomenal. The really best thing about him is that he trusts me and I trust him. When I flew in there, I got in, got makeup put on, and I walked on set and he just whispered in my ear, “oligarch”, and I said, “got it!”, and that was it. We kind of went from there.

It was so great to see my old mate Ron Howard be so accomplished. He’s so brilliant at directing and that was just lovely to watch. We kept pinching each other and saying, “we’re making Star Wars!”, which was fantastic.

BT: What was your experience like working with the movie’s phenomenal cast?

PB: I didn’t get to work with Donald but I did get to work with Alden and did you see Hail, Caesar!? He stole a Coen brothers movie! That’s hard to do. He frankly stole it from the Coen brothers, because they’re the stars of their films, and he stole it. I can’t say enough about how brilliant he is and how much he understood the Han that I grew up with. You have to understand that Star Wars changed my life. I was six years old when I saw Star Wars and it changed my life. It took me out of a grey, miserable, rainy 1970’s London and took me to another universe. Han Solo came on and when he shot first, you went, “Oh my God!! He’s a good guy but he’s a bad guy!”. You learn that the universe is cruel and you’ve got to be cruel to get by, but his heart was just too fuckin’ big so he’s going to go to the Death Star and help you out. And that’s who Han Solo is, right?! This film is about chronicling this kid turning into Han Solo. He doesn’t have to be Harrison Ford. He can be a kid finding out that it’s better to shoot first and that’s exactly what this is about. I’ve worked with a lot of really great young actors and Alden is one of them. I thought he was phenomenal.

BT: As a master craftsman yourself, who inspires you in the industry and who do you still aspire to collaborate with?

PB: Oh wow, there are so many people! It was a big sadness for me in this job to not be able to work with Donald Glover. What a force of nature that man is! It’s not normal to have that much creativity in one human being. [laughs] Not just the energy and the will to act on it, but the level of accomplishment and skill and aplomb is just incredible. Everybody has seen it now so the video for This Is America is just a piece of art masquerading as a pop video. In my opinion, I found it so moving and so powerful. So I would love to work with him, although I would be super intimidated.

Solo: A Star Wars Story is available on Blu-ray combo pack on September 25!