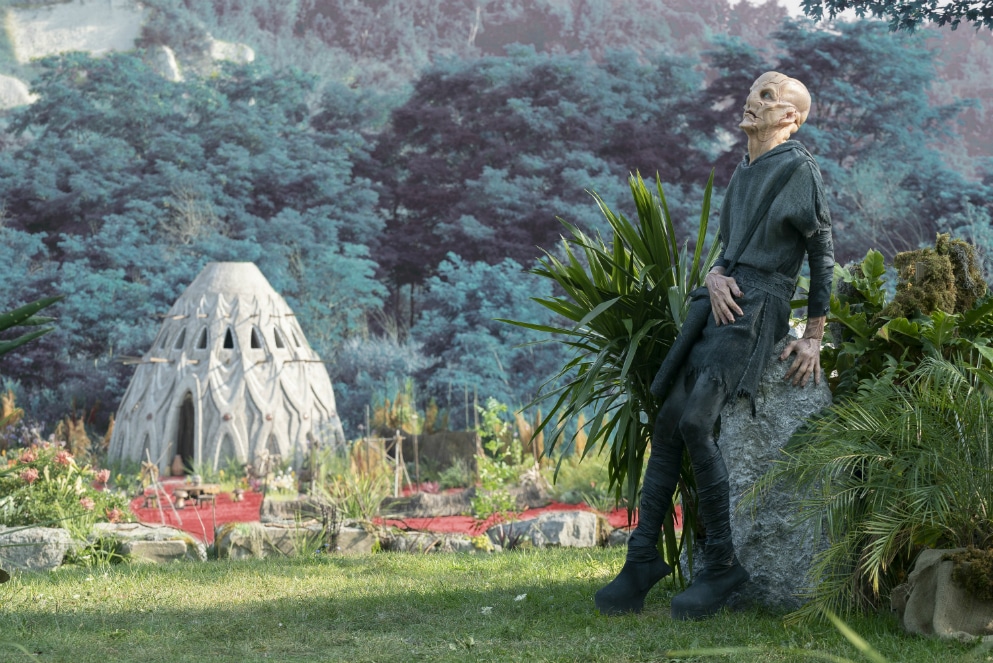 While Kelpian Saru may be the latest role in which Doug Jones has undergone a transformation, the man behind the prosthetics could not have been kinder, and, as previously mentioned, is a bright star in his own right (though would deny the claim immediately, choosing instead to shine the light on a co-collaborator).

The following is a condensed and edited version of our chat with the lovely Doug Jones.

Brief Take: Hi Doug! We’re based in Toronto, where you’ve filmed so many of your esteemed projects and where you’re currently filming the upcoming season of Star: Trek Discovery, we presume. Do you like filming here?

Doug Jones: What you don’t know if you live in L.A. is that the movie industry here has been alive for such a long time, and the talent pool here (in Toronto) is amazing – professional and amazing. And it’s a bunch of nice people – you Canadians are nice people [laughs] – so that would be my number one plus about what I like here. Also this city is very accessible, walkable, user-friendly, very clean; I do love it here.

BT: What is it like to have your own episode of Star Trek: Short Treks?

DJ: In a way it completes the circle. I’ve talked about my history, I’ve talked about from where I come and my people and my history on the series, but I’m the only Kelpian that you’ve ever met yet, except the mirror universe last year. [laughs] So from where do we come? What does it look like? Every time that you meet someone who is a little odd looking, and I know this from experience, ’cause I’m that guy! People always want to know “what made that? What do those parents look like?” You do get to meet my dad and my sister in this Short Trek, and find out what life was like for me before Starfleet. In what seems like a primitive society in the Star Trek universe,  how does one break away from that and become a high-ranking officer on a starship? This particular episode will answer that question for you. I’m really happy that this is finally happening for the fans.

You’ll see the beauty of my home planet, it’s called Kamanar, by the way. And you might see little visual hints of why we are called Kelpiens, and you’ll see that when we look at the human race, and we come in all shapes and sizes and colours, when you look at Kelpiens, we’re pretty much all tall, lanky supermodels. [laughs] So I thought that was kind of fun while casting. And as a little fun tidbit, I had to conduct some Kelpien classes. When casting other actors to play Kelpiens, since I was the first Kelpien, they wanted me to do a quick tutorial with everyone–here’s how I walk, here’s how I stand, here’s how I gesture, of course you can put your own spin on that, but it’s a good Kelpien structure. We are a beach village, where my people live, and once I have taught everyone to walk in our ‘hoof boots’, and here’s your posture, and here’s where you place your arms and here’s how they swing. [laughs] Put all those people onto sand, and now you’ve got a problem! [laughs] We’re all wearing these horrible hoof boots and we’re trying to keep our balance in sand. If you can stand upright, you’ve done a good thing. 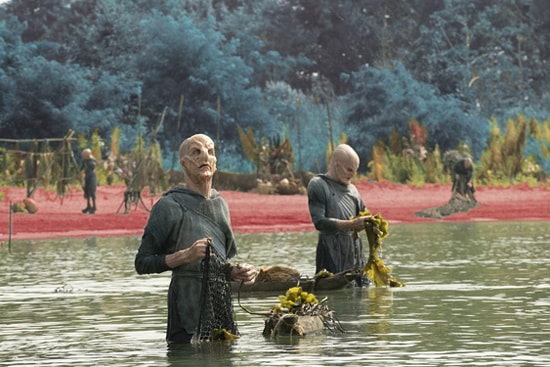 BT: What’s something that you take with you from The Brightest Star?

DJ: The scene in our family home, in our hut, I was playing a younger Saru, so it was like I had to revisit my own teenage years, with my father played by Robert Verlaque, and my sister played by Hannah Spear. I think that Robert is from New York but Hannah is from right here in Toronto. But having a family moment, eating dinner and having a discussion with Dad in which he reprimands me a little bit, it took me right back to my teenage years in which I wanted to ask questions, but my dad shut me down. [laughs] It was like “behave, young man! We don’t ask that! It is because I said so!” How many times have we heard that as kids? So it was actually kind of nostalgic because I’ve lost both of my parents, they’re both gone now, but to have a dad figure and to play a teenage Saru, it was kind of nostalgic and lovely for me.

BT: On a series in which the crew can wear flat shoes, you’re the only one in heels.

DJ: Not only that, but I’m one of two people on the entire bridge that has to stand at my station [laughs]. It’s like “thank you!” [laughs]

BT: What brings the Discovery crew together so well?

DJ: As actors, this is a tight-knit group of people and I just love being a part of that family. Off-camera, I think a sense of play, whether that includes singing ’80s tunes together between takes or whether it’s weekends doing game nights at Sonequa (Martin-Green)’s house, or birthdays dinners out, or somebody has a friend in town in a play so we all try to go, I’ve never seen this much camaraderie on a cast ever. Everybody’s included, not just the top three on the call sheet, anybody, whether they are from L.A. or New York or Toronto, we’re all here together, so let’s all play together. That keeps us tight.

BT: But yet on screen you have to sometimes be in competition with each other.

DJ: [laughs] Right, right. So that’s why game night comes in handy, it’s who can you trust, who has the poker face. [laughs] On screen, when you’re working with actors in such a high-stakes storyline, you do end up, it’s like a trust game, that’s what we do every day with each other, we’re all falling and we’re all catching each other. That also is a very bonding experience. 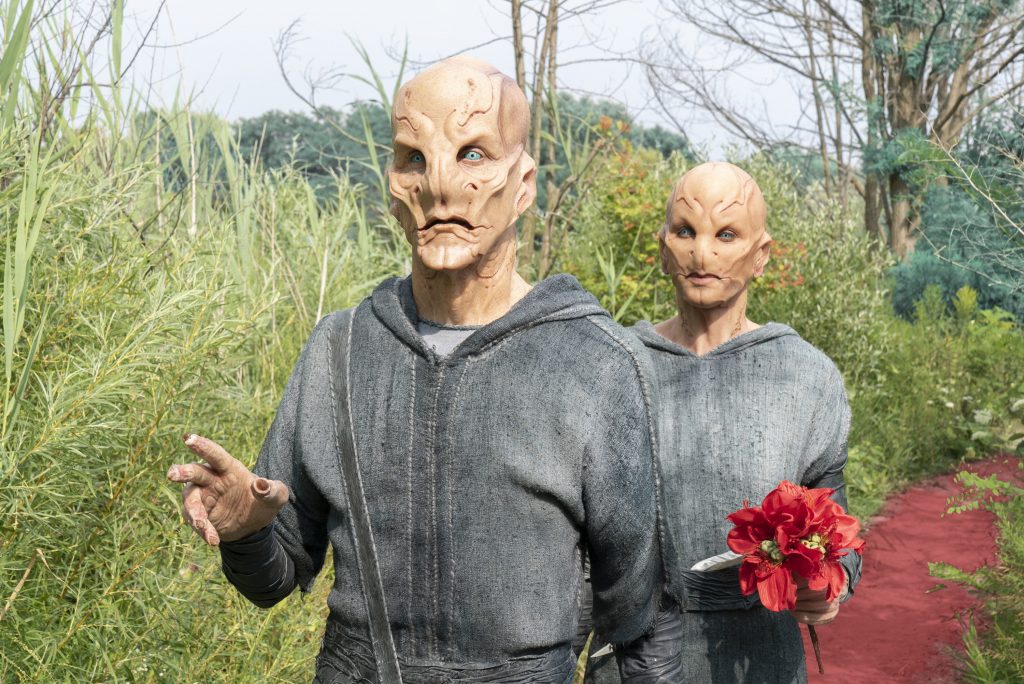 BT: How do you feel about CBS All Access?

DJ: I think that this is absolutely the wave of the future, so every network is doing it. Everyone who has produced television has some way to stream it now. That’s why CBS All Access, and being on one of their flagship shows, is kind of exciting. It’s exciting to be on the edge of the future.

BT: What was it like to premiere The Shape of Water at the theatre at which it was filmed?

DJ: TIFF, we had our premiere screening at…I’m forgetting the name right now.

DJ: The Elgin Theatre, that’s it. Because I was mispronouncing it El-jin, because that’s how Elgin, Illinois is pronounced. [laughs] But the Elgin Theatre is so beautiful. That gorgeous scene, in which I had wandered off out of the apartment and made my way down the theatre when it was empty, so to be right there… And the seat from which I watched the movie was right near where I was standing in the film. [laughs] So I had sort of another full circle experience. And to get up on stage with a Toronto audience that appreciates art; TIFF is an animal unto itself, but it’s so beautiful, and it’s not just a celebration, but to have a movie that had such an artistic base to it, such a beautiful storyline and such a gorgeous message to tell. To show it in that theatre, with that audience in Toronto, was a Canadian experience that I cherish. 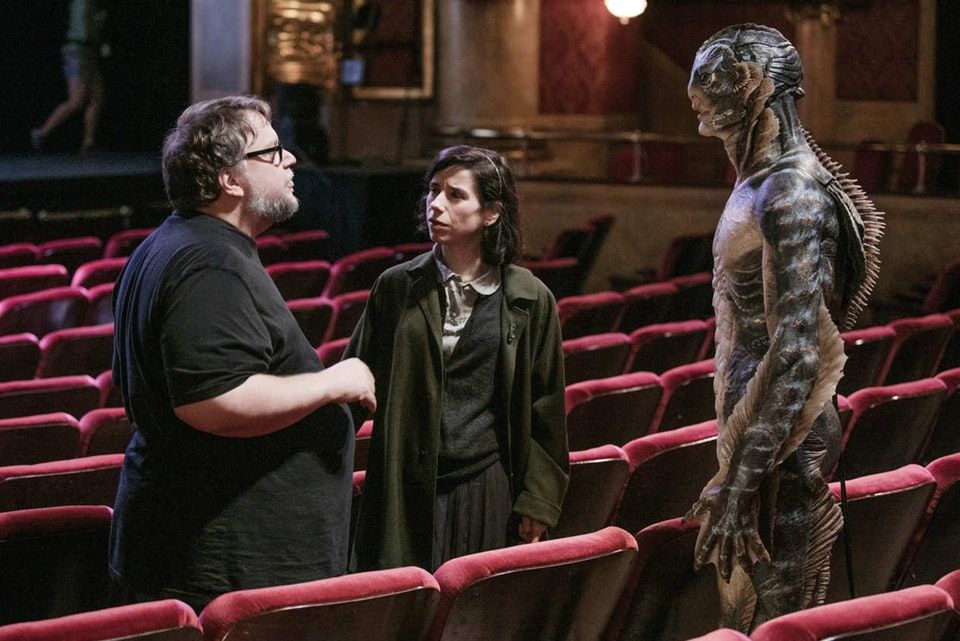 BT: And then what was it like to receive the Academy Award for The Shape of Water?

DJ: Honestly, standing up on stage with a Best Picture win with my favourite director with whom I have ever worked, and with whom I have a twenty year relationship on film, was to see a dream come true. Between Star Trek: Discovery and The Shape of Water, call 2017 the best professional year that I have ever had, or of which I could ever even dream [laughs].

BT: You have a lot coming up as well.

DJ: Just real quick, I have a feature film, Nosferatu actually, which should be ready in time for the Berlin Film Festival. You’ll be seeing it in 2019 sometime. I’m so excited to be playing Count Orlok, it’s a dream role for me. And What We Do in the Shadows, yes. The series is based on the hilarious mockumentary movie. You’ll see me as a very key character in a couple of episodes. Of course they’re filming right now, here in Toronto, so my first commitment is to Star Trek, so I can’t have me too much over there. [laughs] But what time we did have together was a complete departure from what I am doing here on this show. It’s goofy, it’s silly, it does involve some prosthetic make-up, but they haven’t said out loud what I am playing or how I am playing it, so I need to be a little bit hush on that. But you’ll see me in the first pilot episode, all of the questions will be answered right off the bat.