While there were really fascinating pairings at the CBC Winter Press Day, the 5 person group that was made up of Cynthia Dale, Eric Peterson, Yvonne Chapman, Cara Ricketts and Steve Lund were such standouts. It was an interesting experience coming over to their cozy interview space, and we immediately got into a fascinating chat about climate change and global warming, which immediately led into a discussion of the new Street Legal.

The 6 episode series begins tonight and it will focus on the opioid crisis in Canada. It was a really interesting dynamic within the group representing the changing face of CBC and Canadian television.

Here is a condensed and edited version of our chat with the on-camera Street Legal team.

Brief Take: How is this Street Legal new but still honouring the mythology of the original?

Yvonne Chapman: It’s an entirely new story. It’s really built in the reality of the world today. Yes, we are following Olivia 20 years later, but it’s the stories of now. It’s the show of now, and how young professionals are now versus before and in my opinion completely different—while still honouring what was done in the past.

Steve Lund: It was very clear to me that there was a distinct intention of matching the original series, while still creating something original. There were efforts made to raise the bar once again to meet the newer standard of television, while still honouring the nostalgia of the original—that was very evident on set.

Cara Ricketts: Another thing to look forward to—you had used the word “mythology”, which was really nice, and you, Steve had used the word “titans” earlier. And the guest stars on this show alone are worth the watch, between Rosemary Dunsmore, Tom McCamus, Allan Hawco.

CD: We have the Canadian Shield. [laughs]

Eric Peterson: I think that it answers your question originally as to “the mythology of a show” in a sense and part of the mythology of the first Street Legal was that we recognized this is Toronto—this isn’t some place in North America that is neither Canada nor Mexico, which a lot of our cultural energy has gone into. There is something distinctive about this, uninhibited by saying “it’s just Canada”. In a time in which we are inundated with cultural product from all over the world but mainly America, you go “Oh, it’s a Canadian show, I’ll watch that again”, because it thrilled me the first time we saw it. That’s part of that mythology. 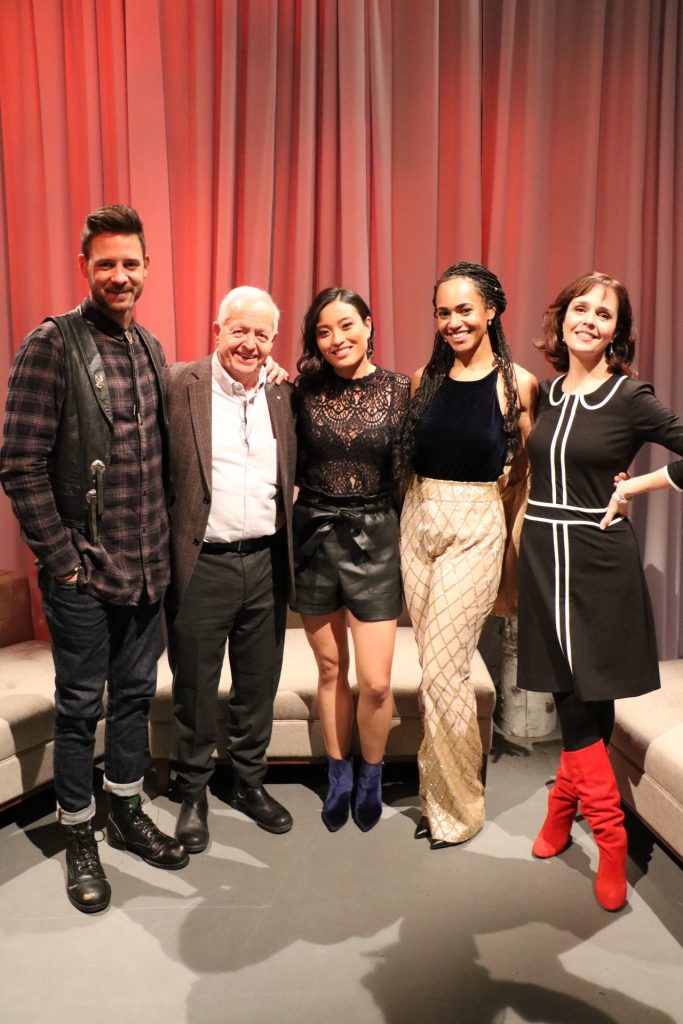 BT: Do you feel a responsibility to live tweet along with the series?

CD: That changed with Scandal and Kerry Washington.

EP: That also speaks to communication and marketing, which has changed utterly. I mean, I think as an actor, a performer in anything in which you’ve been, you do feel a certain responsibility—albeit self-interest [chuckles]—to help to get the word out there about what’s going on and what you have been doing.

BT: How much are you opening the conversation to an audience?

CR: We also do have a hashtag—so if anybody wants to follow that, it’s #CBCStreetLegal. Not #StreetLegal, because that will lead to motorcycles. [laughs]

BT: As someone who grew up in Toronto, it is great to see the changing nature of the city reflected on the show.

EP: Remember in the old one, they had the breakfast meeting? And I remember that we did one at Christie Pits, there’s no restaurant there, they set up a restaurant. But the cityscape? I drove by there the other day on Barton Avenue. The cityscape is totally different now. Like there used to be just the CN Tower and whatever it was, now it’s very different.

CR: We have art that’s based in Toronto in the show—like, it’s everywhere.

YC: It’s a character in the show, definitely.

SL: People are very happy about that, too, like they love pointing out their hometown and their neighbourhoods and stuff. It’s great. It’s super fun.

YC: You know what I am really proud about? We talk about diversity and things like that, but the show saw that and said “this is the normalization of it”, this is reality. We don’t really use the word ‘diversity’, it’s just reality, and it wasn’t something which we drew attention to or focus, it is what it is and it is how it should be. So that’s what I appreciate about the show and how we did that and our approach to it.

SL: I think that’s it exactly—by taking another step forward is having it be so second nature, and I think that is where we stand in terms of that innovation.

YC: This show is sexually diverse, racially diverse and there was consideration for inclusion. And then the thing that made it more amazing was once we got there, then we decided to make it universal, so it doesn’t mean that this person has to go through a certain thing, it’s just this person’s living their life.

CD: One of our characters is non-binary.

YC: And my character is a lesbian and again, what I really loved about her storyline is that yes, she is that, but that’s not all she is, that’s not her entire story. And the way that they approached my relationship on the show is ‘I love another human being—I’m a human being loving another human being who happens to be a woman’. And love is love and that is it.