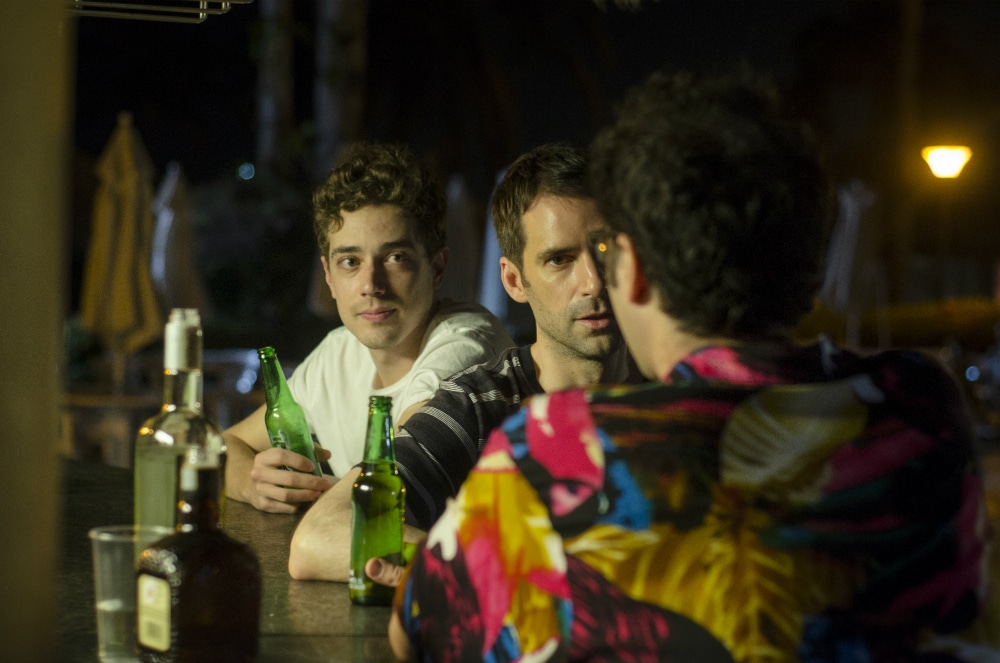 Pavan Moondi is a really talented person and especially nice. In fact, when he first revealed that his film Diamond Tongues was playing Slamdance, I sent him an email, cold, and he sent over the film prior to the premiere, which I think speaks to the guy that he is, and how important it is to celebrate his work. His new film, Sundowners, is a toughie, because it is something of a gem but really features some unlikable characters and is a throwback to road movies of the past. I didn’t realize this, but Moondi has recently joined a writer’s room, so we spoke via email instead.
Brief Take: Why was it so important to have Tim Heidecker in the movie?
Pavan Moondi: I’ve been a huge fan of Tim’s for a long time and it turned out most of the cast and crew were big fans as well. That turned out to be a much needed boost for everyone, since there was a bit of a natural come-down after we wrapped the Colombia portion of the movie. When we got back home to shoot the Canada portions of the film, it felt like the movie was done – we had already had a wrap party and said goodbye to half our crew in Colombia. So it was a bit of a bummer to be back in Toronto in the middle of winter, but once Tim showed up it really got everyone excited again.
Watching Tim work was pretty crazy. His scenes were about 6 pages long but he was consistently giving us 20-minute takes filled with different variations on every joke. He’s about as good as you can get at improvising – not just in terms of being hilarious, but knowing when and how to rewind the scene and make sure we got what we needed with good edit points (there was a lot of on-set laughter stepping on his lines those days).
Brief Take: To what degree would you consider the film a departure from Diamond Tongues?
PM: I think the film is definitely more overtly comedic than Diamond Tongues was, but I think the shared DNA is probably pretty apparent. They’re both still character-driven films and are similar stylistically and structurally. Leah and Nick Flanagan are both back, but I think that has more to do with me wanting to continue to work with people who I know and love than any kind of explicit relationship this film has to the others.
Brief Take: What was it like to have Phil Hanley play a non-comic role? Was he forced out of his comfort zone?
PM: I think if anything, Phil was probably being forced most out of his comfort zone compared to some of the other comedians who have smaller parts and have acted before to some capacity. Whereas with Phil – he had no real acting experience and was being counted on to carry the film and I thought really delivered. I like working with both comedians and musicians because I think they have a natural comfort in expressing themselves which is something I’m expecting from them. That said, I don’t think just any comedian or musician would make a great actor, but after meeting with Phil and Luke and previously, Leah [on Diamond Tongues], it was clear they were excited by the opportunity and were going to take it seriously. It’s hard work.
BT: What did you think of the pool scene? Would that be the centrepiece?
PM: I would probably consider the wedding scene to be the centrepiece but this one was also a difficult scene to shoot, technically speaking. The actors are in the water and shirtless and so lavalier mics weren’t an option – which meant all the audio had to be boomed. That didn’t mesh very well with my intent to shoot a lot of the movie as wide as possible but we made it work and our sound guys Paolo and Camilo did a great job staying out of the frame. Also, the power kept going out over and over again while we were trying to shoot; the monitors kept messing up; and we fell way behind schedule. The two hooligans are also played by one of our camera operators and the A.D. so it meant we were short-staffed behind the camera, as well. It was a stressful night but it came out as great as I was hoping.
BT: What sort of role does music play in informing the spirit of Sundowners?
PM: In terms of using musicians as actors, I touched on it a bit already, but there’s no specific directive to work with musicians. I’m looking for people who I think are interesting and will work well within the framework of the film and it’s just kind of happened.
In terms of how music is used in Sundowners and my previous films, it’s not really a conscious thing. I’ll randomly come up with moments and scenes while I’m in the writing phase and sometimes those will be come to me as pieces of dialogue, situations or montages. When I’m editing together the film I’m really just going with my instincts on what I think best conveys the intention of the scene and appeals to my tastes. I think it’s resulted in films that hopefully have an increasingly-specific style and feel.