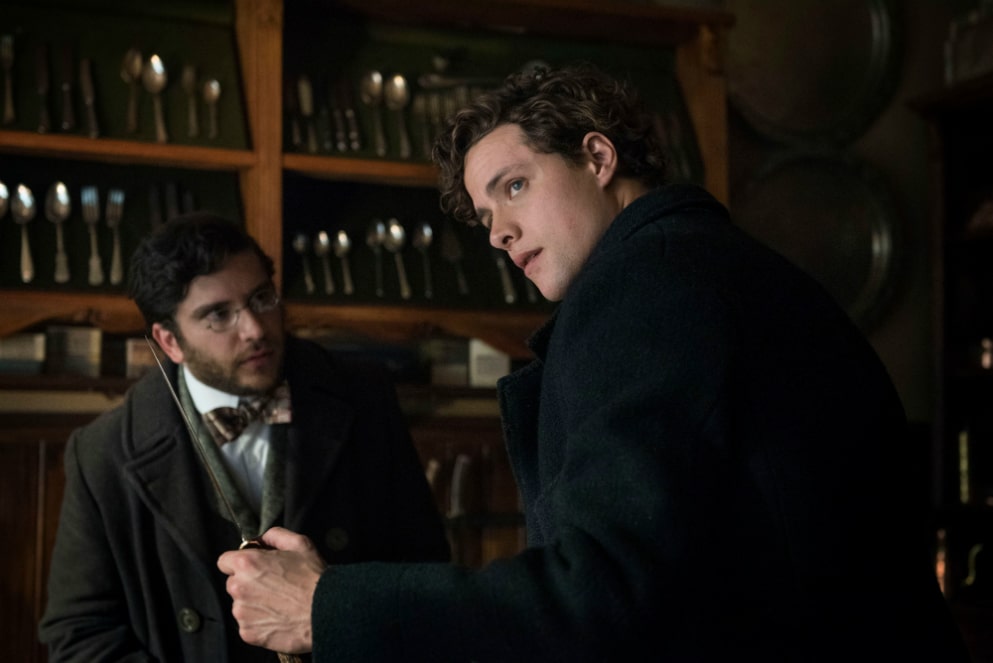 The best part about speaking to actor Douglas Smith is that he when he makes the phone call from Los Angeles, he is driving down the highway, coming from an audition, dropping off part of the suit he wore to a glamorous premiere last week. “I’m your standard dishevelled actor, I guess”, he humbly says. He is unfiltered, and really provides a lot of insight into his character Marcus Isaacson in the highly anticipated series The Alienist. The show debuts Monday at 9 p.m. on TNT and TBS, and will air on Netflix Canada in the near future.

The following is an edited and condensed version of our spirited conversation.

Douglas Smith: Yeah! I was born in Toronto and I left when I was two but I spent a lot of time there because my older brother [Gregory Smith] was on a Canadian TV show for years there [Rookie Blue], my sister [Samantha Smith] went to York University, and then she left and went to George Brown. Yeah, so I’ve spent a lot of time in Toronto.

BT: We don’t see you as much in the first episode of The Alienist but by episode two…

DS: I’m a blip in the first episode. We come in and I’m doing an autopsy with my brother, in the laboratory of Dr. Laszlo Kreisler (Daniel Brühl), and then episode 2 we’re questioning a guy, and we’ve got The Arkansas Toothpick and we’re trying to see if it would work out to cut out a cow’s head eye. That was a wild day on set, filled with extras and real meat and real animals and it was cool. A lot of the earlier scenes we shot on the show were more overwhelming in terms of sensory overload, which was a bit of a challenge because we were still just getting used to each other. Myself and the actor who plays my brother [Matthew Shear] were trying each other on for size and it was quite a wild way to begin working on this job. Some of the smaller, intimate scenes with our family, our mother, the girl with whom I end up having a relationship, were shot later on. It definitely felt like the first two months we were in Budapest, all our scenes ended up having a minimum of fifty extras in them.

BT: But you and Matthew managed to feel each other out successfully?

DS: We got along great from the minute we met actually. It was more trying to understand where our feet were underneath us as actors. It’s a difficult thing just making choices and feeling like “alright, that’s the choice with which I have to stick”…I don’t know how I could have done it without Matthew because we were each other’s lifeline. We spoke every day. We kind of got there really early, like much earlier than we needed to, because of the scheduling. So we spent a lot of nights talking about the characters and then coming up with our own character bios and asking the writers if that made sense because it didn’t conflict with anything. We watched movies that got us into the spirit. We watched documentaries. I brought certain novels, he brought certain novels. He one-upped me because I brought a camera, because my character gets into early forms of photography to document the crime scenes, and then he brought a nineteenth century medical manual written by a French guy in the 1800’s, and I was like, “ah, you win”. We talked every single day. I doubt that there was a single day in the six months we were in Budapest that we didn’t speak. And we still speak now, we text each other. He lives in New York and I live in Los Angeles, but yeah, we hit it off.

DS: *pauses* I don’t know, a lot of times if you bring siblings into a situation they react in two completely opposite ways. For example, my older brother is much like Lucius in that he’s much quieter and he’s embarrassed all the time and kind of apologizing as he enters a room, and I’m kind of the opposite of that. So I’ve kind of plugged my older brother into Lucius’ role and plugged myself into Marcus’ role. We’re the outsiders, we’re not as wealthy, we’re Jewish, we live in gowntown in the Tenement District on Hester Street. I actually spend a lot of time in that neighbourhood of New York and it’s pretty different but there’s still the old buildings, and it’s pretty much Chinatown now, Little Italy and the tenement area of the Lower East Side. It was kind of cool, I am curious to see the rest of the show. I believe that it has a lot of promise and I’m curious to see if it fulfills the promise put forth in the first hour.

I think that there are some really interesting questions it raises about what Kreisler talks about and I believe that it has something to say. Plus the violence and the gore is not just going to be sensational. And I don’t know if profiling is the best thing or if it’s not, I sometimes wrestle with that when I read the news about anything from airport security to the new mayor of New York trying to stop-and-frisk laws, is that a good thing, is that a bad thing, I wrestle with it, because I want to live in a completely free society, but I also want to live in a safe society. I’ve been the victim of being broken into before.

BT: Truth and fiction are blurring.

DS: It’s the same thing with medicine. We feel like medicine can cure anything and psychologists can diagnose anything, and at the end of the day, when it comes to mental health especially, we’re sort of just throwing stuff against the wall and seeing what sticks. You want to believe that someone has a reason for doing something that’s evil, to sleep better at night, but maybe there is no reason.

BT: You all come at the case but maybe in different ways?

DS: We do come at the case from different angles. My angle, I felt, was borderline sociopathic. I was looking at the case like “let’s look at all the methods that were sort of lab ratting around, let’s see if they really work”. There is an important beat around the middle of the show where Marcus feels the sadness that some of the other characters feel right away. I think John Schuyler Moore [Luke Evans] feels it right away at the outset. I don’t think Marcus does. Nobody told me it was the wrong choice.

The Alienist airs Monday, January 22nd at 9 pm on TBS and TNT.