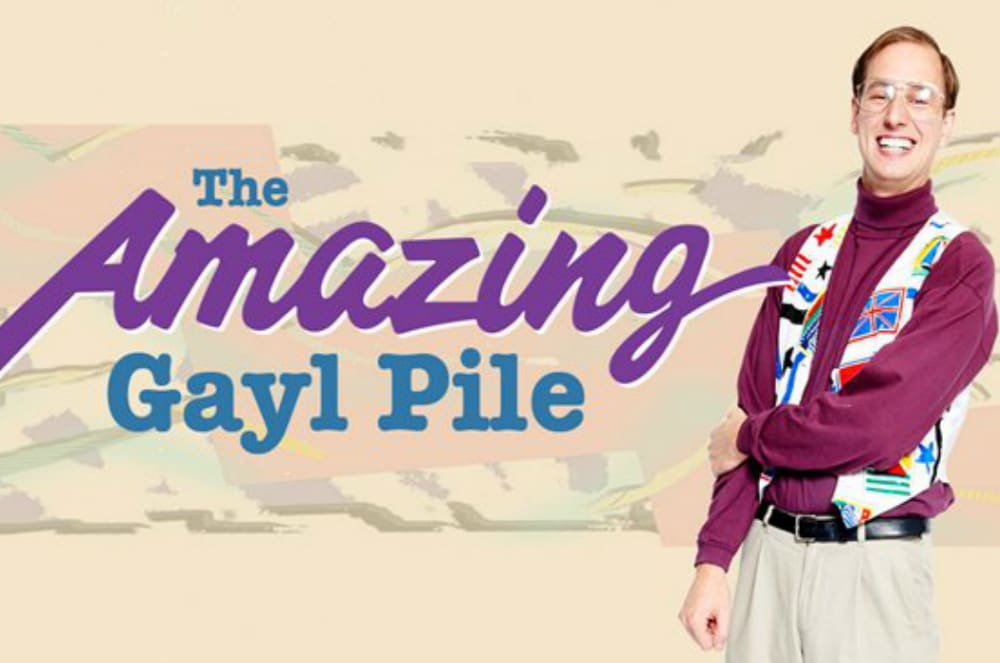 The new season of the International Emmy nominated web series The Amazing Gayl Pile starts streaming on CBC Comedy on March 29th. Off-beat and unapologetic, Gayl Pile follows one man’s misguided quest to conquer the world of home shopping. The LaRue series has been nominated for multiple Canadian Screen Awards and has even won a few. The creator/ director/writer and star Morgan Waters is also a guitarist for the Polaris prize nominated band Weaves, and Waters was actually returning from the JUNO Awards when we sat down at the Larue office. He is hilarious and the show is as well.

Brief Take: Where did you find the inspiration for Gayl Pile?

Morgan Waters: Originally, I worked on a MuchMusic prank show and there was one prank on which we were pranking a girl and making her think her hair was being destroyed by these two hair care specialists, while they were shooting infomercials. So I was playing an early version of Gayl Pile in that. So it actually started as another show’s early version of it, and it was so fun being that nerdy kind of character next to J.D. who was…he was more of an alcoholic in that first version, but just having those two opposing personalities up against each other was fun, so we were like, “let’s do more of that”.

BT: How do you balance the tone?

MW: Brooks and I work on that as sometimes it’s heartfelt and really Degrassi, and sometimes it’s like full David Lynch dark and sort of horror, so it’s just figuring out the tone from scene to scene and how it all ties together. It’s a weird mix of influences, so balancing these tones in the edit and the music, you just want to watch it and be unsettled.

BT: What are some of your influences?

MW: Like Human Giant with Paul Scheer [who is an executive producer], and Jon Daly from Kroll Show, and we do some prank stuff too. Early Tim and Eric, all that stuff filters through our work. Then all the British stuff like Alan Partridge, we love that kind of stuff, all of these flawed characters and watching them sort of unravel.

BT: Where do you shoot the series?

MW: We shoot in Toronto and pretend it’s Hamilton or Lower Guelph, which is kind of the other way around. This season is Orillia so it’s more pastoral, farm vibe. We actually shot that in Lindsay, Ontario at a farm at the end of summer. We were there for two weeks, just living on this farm. It was nice. I feel like in Canada we have a tendency to say shows are not Canada, and it’s fun to go the complete opposite direction and lay on thick all the Canadian references. It’s funny, too, because people like Paul Scheer, they don’t know the references, but it just becomes funny.

MW: It’s sort of like an absurdist, dark, melodrama comedy series, that goes in a million different directions. I guess they’d have to see it to get the tone, but people that I’m inspired by, like Steve Coogan who plays Alan Partridge, he would be a dream collaborator. Actually we were nominated for a Daytime Emmy and everyone got to go to the Emmys but I was on tour, and they all met Steve Coogan and I was a little jealous, but I was happy to not be there because I wouldn’t know what to say to him. Having Jon Daly, Jack McBrayer was amazing and Jon Hamm doing the voice of Gayl’s digital condo, it’s unique to have those kind of names attached to an indie Canadian web series, and it’s flattering that they saw the tone of it and they thought it was funny.

BT: And you have a sense of trust with your core collaborators?

MW: Everybody knows their characters, especially after four seasons, and it’s much easier to know who everyone is. So Inessa Frantowski plays Renee and she is so talented and brings so much of her own spice to it, it’s crazy. We write situations but then she’ll just come up with the craziest dialogue, and her mum is in it, so the more we blend between the character and the real person, the better. Daniel Stolfi, this year we had Linda Kash, who is so talented and was in Seinfeld and Waiting for Guffman, the Christopher Guest movie which was such a big influence, so she was able to show up and immediately play, it’s just like when someone is shreddingly good.

BT: How did you start Weaves?

MW: Jasmyn [Burke] was doing a solo set just by herself and it was amazing. I went up to her afterwards and I was like “do you want to work on stuff together?”, so I didn’t really know her that well but we just started demoing and stuff. It was a really cool thing to have Sweet Thing’s song Change of Seasons on the Easy A soundtrack, it was like the theme song for that movie, which was really cool. I still play with those guys, they do Dwayne Gretzky. I was playing bass in that band, and I do guitar in Weaves, so I get to do a new role, which is fun. It’s fun making stuff with friends.