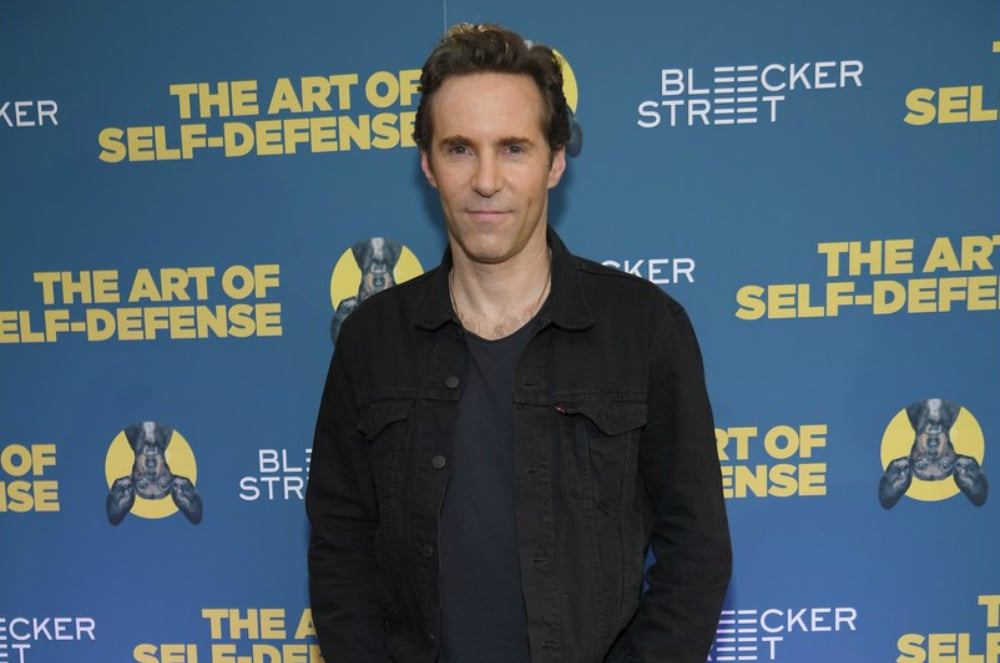 Alessandro Nivola has an innate charm and an easygoing phone manner and so our conversation about The Art of Self-Defense, in which Nivola plays Sensei opposite Jesse Eisenberg’s Casey, was illuminative. Because while Sensei could not be more intense, Nivola is easygoing, offering up some choice details about Riley Stearns’ film, but also speaking about the directions that his own career is taking, as actor and as producer. The magnetic presence and versatility Nivola displays will next be on display when he plays Dickie Moltisanti, the lead role in The Many Saints of Newark, the Sopranos prequel movie.

The following is a condensed and edited version of our enlightening chat with The Art of Self-Defense‘s Alessandro Nivola.

BT: This film speaks to toxic masculinity. Do you look toward certain themes in the roles that you choose?

AN: Not really, on the contrary, I try to make every role that I do as unlike as possible as the one before it. I’m a restless person and I get bored very quickly and I always want to make as much of an about-face as I can from one role to the next. But, thematically,  we are living in the times that we are in right now and it makes sense that there are certain themes that are going to come up again and again in the storytelling of this moment.

BT: What was it like working within the dark satirical tone of the film?

AN: Well, [laughs] what it was is that we played the script seriously, and everything that I say is totally inane. So it’s the mish-mash of those two things that brings out the humour. 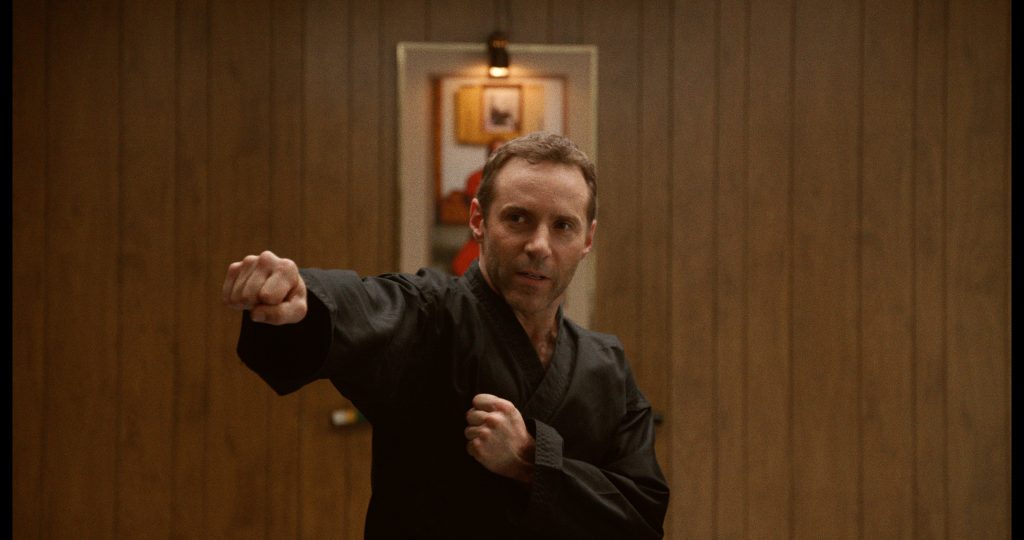 BT: How was it filming in Kentucky? Not much tends to shoot there I’ve noticed.

AN: Yeah, I’d certainly never shot there before. I really loved Louisville – I’m a big bourbon drinker [laughs] so that was helpful. And it’s in a part of the world in which there is a lot of music and I’m a big country music fan and blues fan. There was a music festival in Louisville while I was there called the Bourbon & Beyond festival, I went to that and I drove down to Nashville for a weekend and stood on the stage of the Grand Ole Opry, which was also great. I’m going to film a movie with Ethan Hawke in the new year called Satan is Real about The Louvin Brothers, who were a country and gospel brother double act and there’s a lot of scenes of me sitting on the Grand Ole Opry stage. I’d never before been there so that was a particularly rare thrill. But I really loved Louisville and it was a very chilled out place to shoot. There weren’t a lot of other movies there from what I could tell, but people were really accommodating to us.

BT: You’ve been in a number of Jewish movies in a row, including playing, in your wife’s words, a “sexy sad Rabbi” in Disobedience. Was this by design?

AN: That really was an amazing coincidence that I was only cast in Disobedience months before we went into production on To Dust, and we’d been developing To Dust for about 3 years prior. It really was astonishing that these two projects coincided and I ended up being able to use a lot of the research that I’d done for the role in Disobedience, a lot of the people that I met in the Orthodox community ended up becoming advisors and even actors in the film that we produced, so there was a lot of crossover. Man, you know [laughs loudly] I don’t know why it’s happened that way! Sometimes things go in these weird little patterns. My grandmother was German-Jewish on my father’s side and she was born in Frankfurt and grew up in Milan, because in the 30’s they’d fled, and ended up marrying my Sardinian grandfather. I have a Holocaust survivor in my family tree but she had sadly passed away before any of these projects came to fruition. It would have been interesting to have her see them and to have her to talk about them. 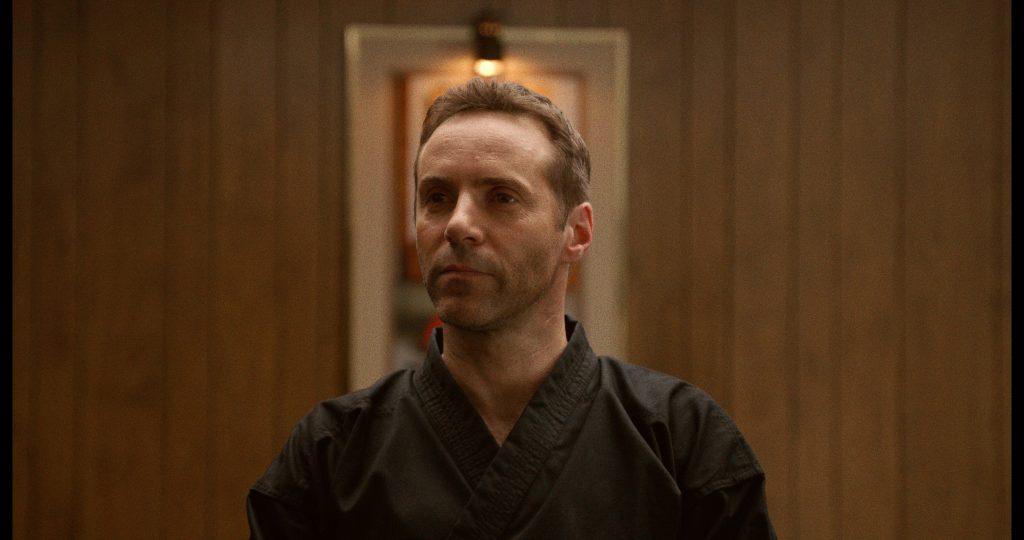 BT: Tell me about collaborating with Jesse Eisenberg as your scene partner in the film.

AN: That’s one of the delights of being an actor and being in a creative field, which is that you encounter unique people and depending on who you’re working with, it’s naturally going to affect your own rhythms and how you interact. Jesse and I, we had a kind of…I don’t know, a kind of natural timing together. We didn’t really discuss these scenes much before we shot them and we didn’t analyze it all that much. We kind of went in and did it and I think that we both had the feeling while we were filming it that there was something about it that worked and about the strange double act that we were in this movie. [laughs] I really am a big admirer of him and personally he’s a fascinating guy: incredibly bright and very quick-witted, politically motivated and I really like him as a person. But as an actor, it was kind of instinctive whatever chemistry we may have in the movie. 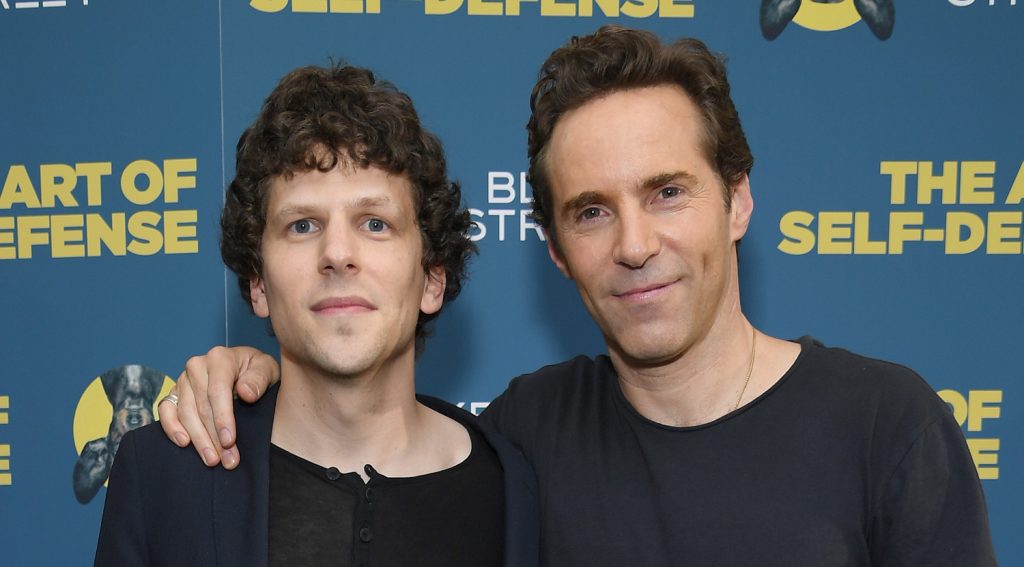 BT: You have quite a lot of interesting projects coming up and you really are chameleonic in each of your films.

AN: Thanks, that’s a huge compliment. I mean the guys that I grew up idolizing were all those kinds of actors, they were movie stars but they were very different from role to role. Robert De Niro is my all-time favorite actor but Gene Hackman and Robert Duvall and Al Pacino and Dustin Hoffman and Daniel Day-Lewis and Sean Penn, those were always the guys after whom I had always wanted to model myself, so hearing myself described that way is definitely flattering.

BT: What are some of your key roles to which you come back?

AN: Ummm, wow! The big moments for me are, I mean my first role in New York was on Broadway opposite Helen Mirren in a Turgenev play called A Month in the Country, and that really kind of started my career for real, and then Face/Off was my first big movie and that’s something that still has a cultish following and people are keen to have a lasting impression. Laurel Canyon with Frances McDormand was one of my favorite roles.

More recently, working with Robert De Niro in The Wizard of Lies had a big impact on me as an actor- watching some of the things about the way that he works, which I’ve adopted for myself after working with him. Disobedience was a big one for me as I was filming it in the last months of my Dad’s life and it was very emotionally charged because of that, and I really loved the character. In recent years, my career as an actor has been building towards this role that I just did in The Many Saints of Newark, which was unquestionably the biggest kind of career breakthrough that I’ve had ever and it’s a role of a lifetime for which I have waited a long time.

BT: Do you think that your kids will have a chance to watch your projects?

AN: Yeah, the older they get, the more likely it is that  some of the stuff that I’m in they’ll get to see, because I haven’t made a lot of movies for kids. You know my daughter came to see the premiere of The Wizard of Lies and my character Mark Madoff ends up hanging himself. But she really wanted to come and I told her that I was concerned about this one scene that I was hanging from my neck and she had to understand that it was fake. I explained to her how they did it, with all these harnesses and stuff and not to be freaked out by it or anything, and she assured me that she’d be fine. I was sitting with her sitting next to me at the premiere and we got closer and closer to that scene and I started feeling more and more self-conscious about it, because with my little seven year-old daughter there, I felt like people were  going to be looking at me disapprovingly. [laughs] And finally the scene was about to come and I went to block her eyes, and I looked over and she’d been fast asleep throughout the whole middle. [laughs loudly] They’re now getting to the age in which the stuff that I’m in, they’re old enough to see and to appreciate it in a different way.

The Art of Self-Defense Review