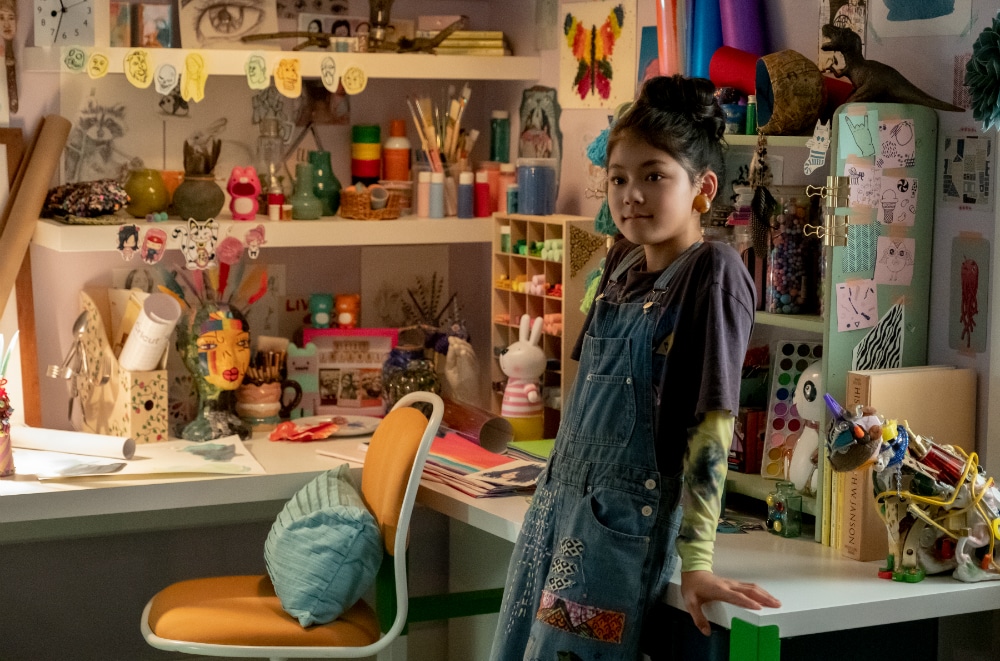 Ann M. Martin’s The Baby-Sitters Club book series has made an enormous impact on millions of pre-teens around the world (myself included, back when I was that age) not only for its mature handling of topics including body image, divorce, and death of a close family member, but also because it was the first time young people (no matter their background) could see themselves reflected in art. For many Asian girls worldwide, the character of Claudia Kishi (the 12 year-old Japanese American burgeoning artist with a weakness for candy) was groundbreaking (see the excellent Netflix documentary The Claudia Kishi Club for more on this). Now, with the recent release of Netflix’s The Baby-Sitters Club, a whole new generation of pre-teens (and let’s face it, adults too) will learn and grow with Kristy Thomas (Sophie Grace), Claudia (Japanese Canadian rising star Momona Tamada), Stacey McGill (Shay Rudolph), Mary Anne Spier (Malia Baker), and Dawn Schafer (Xochiti Gomez).

I was thrilled to get the opportunity to chat on the phone recently with the delightful Momona Tamada and the following is a condensed and edited version of our interview.

Brief Take: Hi, Momona! Congratulations on the success of the show and on your portrayal of Claudia. It’s just an energetic and playful performance.

Momona Tamada: Aww, thank you so much.

BT: Have you seen the show yet? If so, what did you think of it?

MT: Actually the day it came out I watched it with my whole family and it was super fun. I think they loved it. I’m super lucky to have such a supportive family and my Mom was definitely crying a lot.

BT: What did you like best about playing Claudia?

MT: I read about Claudia growing up, she was a huge inspiration to me, so being able to portray her was a huge dream come true. I loved how she’s so bold and I feel like she breaks a lot of stereotypes that people have of Asian characters, so that was really cool. 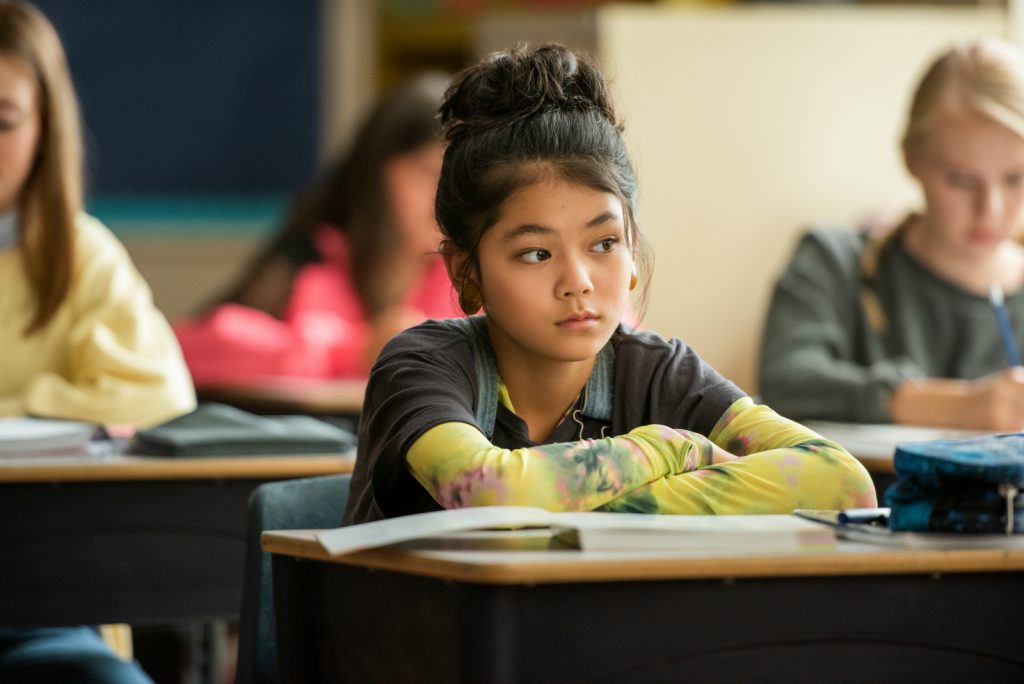 BT: I read that you did the drawing on Claudia’s backpack. What did you draw?

MT: I drew this feather but it wasn’t a traditional feather, it had little doodles in the shape of a feather, if that makes sense. I feel like Claudia is a very free-spirited person so that drawing represents that.

BT: I really felt like the girls in the club – you, Sophie Grace, Shay Rudolph, Malia Baker and Xochiti Gomez – were a sisterhood by the end of the season. Did you all spend time together off set in order to establish that dynamic?

BT: I read that Ann M. Martin visited the set and you got a chance to chat with her. I’m just curious, what did you talk to her about?

MT: I did get to talk to her. That day I didn’t know she was coming to set, so it was crazy! I got her to sign a little Baby-Sitters Club flyer, which was super cute. 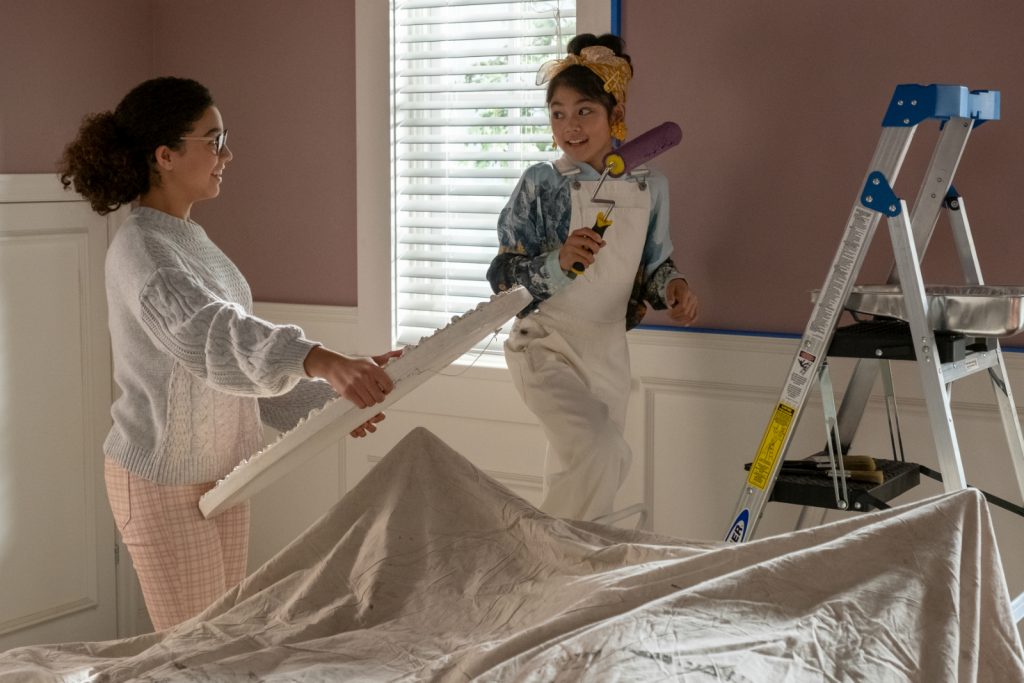 BT: We have to talk about Claudia’s sense of style because it’s just incredible. I loved all the fruit earrings, the leopard print coat, the yellow plaid outfit that was a nod to Clueless, the costume party outfit nod to Schitt’s Creek, and of course the gorgeous dress for the wedding episode. Did you have a favourite outfit?

MT: I mean her iconic mustard yellow jumper was amazing and also I loved her wedding outfit. The crazy thing about that is that I had the fitting for that outfit the day that I was supposed to wear it, which is kind of crazy, but the wardrobe team was absolutely incredible.

BT: Did you get to keep anything from set?

MT: I did actually! In the end, all the girls and I shopped in each other’s wardrobe and I got to keep something from Claudia’s and from all the other girls’ wardrobes as well, which was super cool.

BT: Did anyone keep the pillow or rug “is my husband”?

MT: I don’t think anyone kept those. I know all of us got to keep one thing from Claudia’s room. 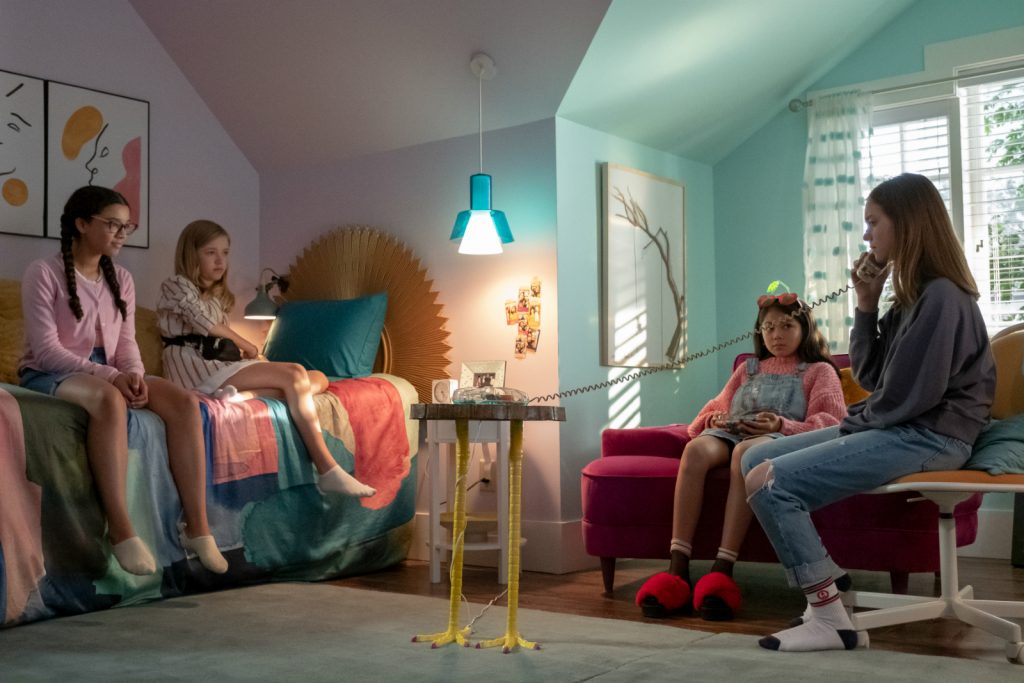 BT: I watched the Buzzfeed video where you all found out which Baby-Sitter you’re most like and you got Stacey. But when you were reading the books and filming, did you feel like you related to any one character? I always felt like I was part Kristy and part Mary Anne.

MT: Well I definitely could relate to Claudia and probably Stacey mostly. But I was a little bit like all the girls.

BT: Between the Lara Jean movies and now The Baby-Sitters Club, you’ve been a part of projects that have positive Asian representation on screen, which you were mentioning earlier. How does it feel to be a part of that?

MT: It’s so cool to be a part of it because I feel like the diversity in the film industry has definitely grown and being a part of that impact is something really cool. I never thought I’d have the chance to do this, so that’s incredible to me. 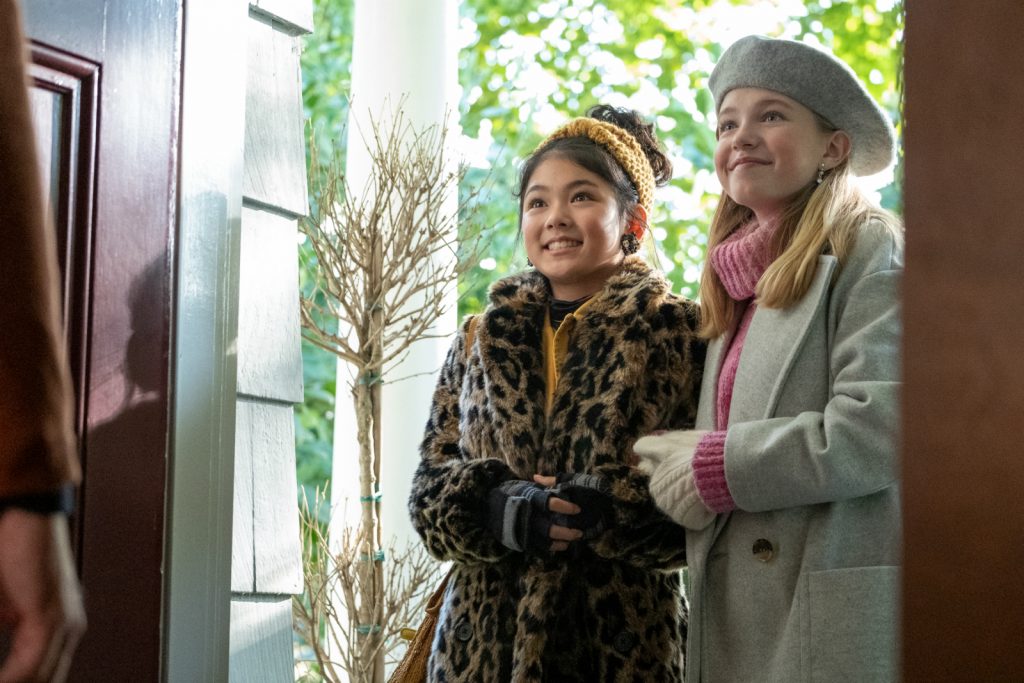 BT: And then you have another movie for Netflix coming out soon, also revolving around babysitters, A Baby-Sitter’s Guide to Monster Hunting. What do you like to watch on Netflix?

MT: I watch a bunch of stuff on Netflix. Recently a lot of Studio Ghibli films were added to Netflix so I’ve been watching those and catching up on all my tv shows and movies.

BT: You must be getting a lot of positive reactions to Claudia online. What has that fan support meant to you?

MT: I’m so grateful to have such supportive fans and to see that everybody is loving the new show. It’s great seeing the audience’s positive reactions to the show as well.

BT: I loved all of the scenes with Claudia and Mimi, played by Takayo Fischer. Did you have a favourite scene to shoot?

MT: I loved all of the scenes with her so much because I have a close relationship with my grandma as well. I don’t think I could pick just one but all of episode six was so much fun to film but it was a challenge as well. 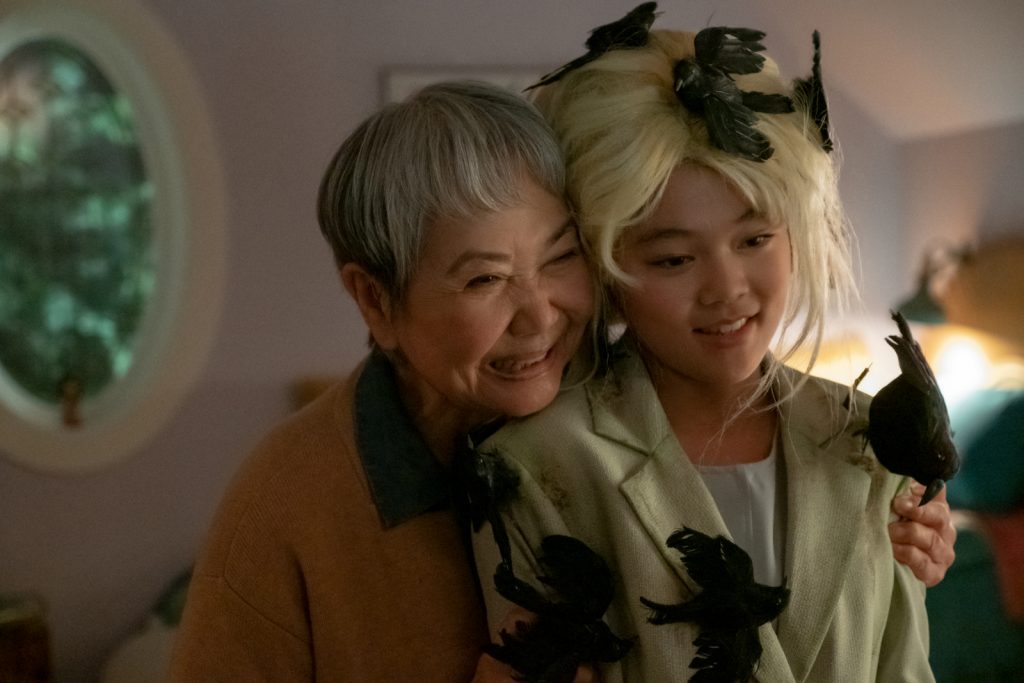 BT: For the Camp Moosehead episodes, did you all get to stay at a camp? It felt very authentic.

MT: [laughs] We didn’t get to stay at a camp, it was shot at an old summer camp, I believe. But we did get to go there every day for two weeks, which was a ton of fun. Because we were on location, all of us ate lunch together on the rocks because the scenery and the nature was just so pretty.

BT: Do you have a favourite memory from set? 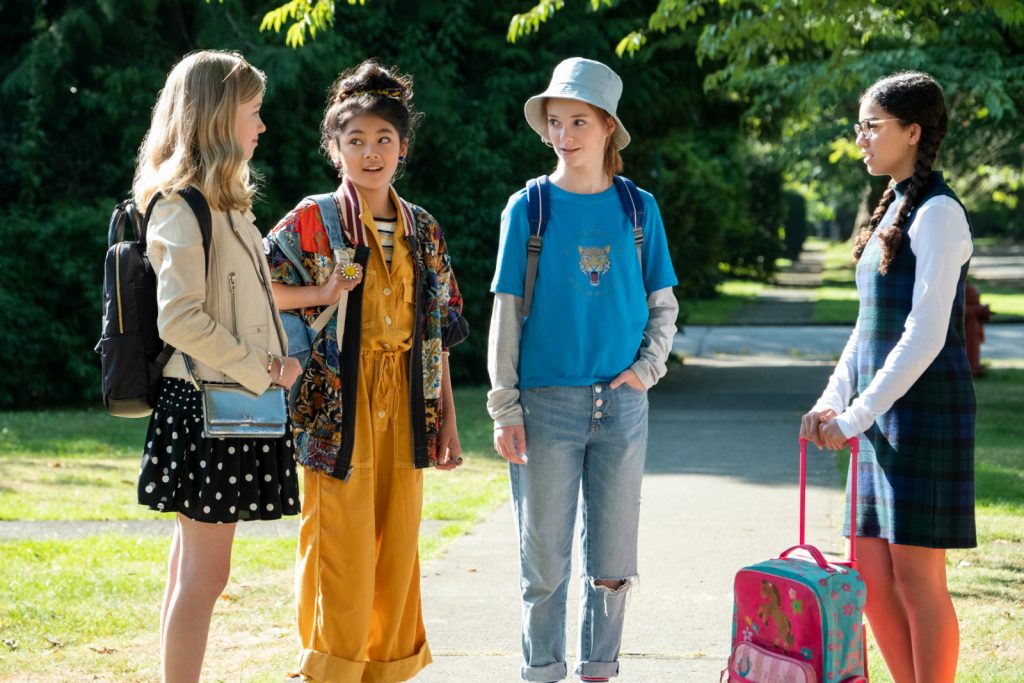 BT: What about the candy in Claudia’s chair, was that real?

BT: I think that was my favourite part of Claudia’s room – all the candy.

MT: Yes! It was so much fun to find all the hidden candy spots on the first day.

BT: Is there going to be a second season of The Baby-Sitters Club? I really hope so!

MT: I really hope so as well! I think all of us have our fingers crossed for season two, but that’s something you’re going to have to ask Netflix.


The Baby-Sitters Club is now streaming on Netflix