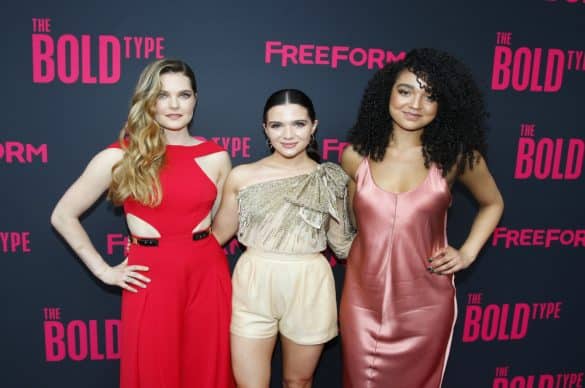 The Bold Type is a brand new show on ABC Spark (Freeform in the U.S.) that focuses on the lives of young writers for the magazine Scarlet in New York City. It is produced by Joanna Coles, the former editor of Cosmopolitan magazine, and is based in part on real experiences, but updated to the year 2017. The best part of the show is that it features dynamite performances by its three leads, Katie Stevens, Aisha Dee and Meghann Fahy, who plays Sutton Brady, who is integral to the show and features in the main plot in the pilot episode. We had the great opportunity to chat with the actress and she responded in kind. Here is an edited version of our conversation.

Brief Take: Do you consider yourself to be The Bold Type?

Meghann Fahy: *pauses* I consider myself to be a person who is in constant pursuit of being the bold type. I think that I make conscious decisions every day to be bold. It’s not something that comes naturally to me. I’m a little bit shy by nature. So it’s a challenge that I adore chasing. But I do believe that this show has brought that out in me much more. I have learned a lot by being part of this show and being involved around the people that are making it, and have absolutely made me the bold type.

BT: You have such a great connection with your co-stars Aisha Dee and Katie Stevens.

MF: Yeah, we really do. I had a chemistry read with Aisha Dee and I had never met Katie Stevens. But after we found out that we were cast, we had some Skype dates, and we would Skype each other and drink tea and talk. The week before we started shooting, the three of us met up in New York City and it was like we had known each other for a really long time. We got very lucky. They have very quickly become sisters to me.

BT: You all have backgrounds in music as well!

MF: Yeah, we’ve talked about that a lot, actually. I started my career in a Broadway musical [Next to Normal] when I moved to New York, like 2008. Aisha plays the ukulele, the piano and the guitar, and Katie plays the guitar and writes music. Katie and Aisha have actually written songs together. A lot of times that we hang out it ends up being a jam fest, if you will. *laughs* I think that (music) really brings us together and connects us on another level, apart from the chemistry that we have, within the context of the show. It’s something for which everyone is really grateful, because it’s hard to be away from home for so long, we do spend so much time together, we really are feeling so lucky that we enjoy the time that we spend together as much as we do.

BT: The show is female-focused and girl-positive. Do you have strong female role models in your life?

MF: I have been so lucky. I have had amazing women in my life, in this industry, that have really been a saving grace for me. It can be a lot to navigate and just the other day I called one of my really good friends, and I was like, “hey I have some questions about this, can you chat with me?”, and she was like, “yeah, I’ll call you in ten minutes”. I knew that talking to her would be exactly what I need. She is so wise and smart and knows the business and knows me. I thought to myself, “it’s not so bad, is it?”

BT: The theme of mentorship is quite present on the show.

MF: I think it’s more interesting to see young women guided and supported by each other and by the mentors that they have in their life. In this case, Jacqueline, played by Melora Hardin. She’s honest with them, she holds them accountable for things, but she helps them only to apologize when they need to, and she wants to see them succeed and she is giving them every day confidence and not the opposite. Intimidation is not a word in her vocabulary.

BT: New York in The Bold Type looks a little bit like Toronto…

MF: *laughs* Yeah. In the pilot episode, that we did shoot in Toronto. We’re up in Montreal right now, for the rest of the season we’ve been working on. *laughs* You know, it’s funny because I’m a New Yorker, and there’s the subway scene, and I was like, “Oh my God, this looks nothing like New York”, but nobody else seemed to care, because they’re not from there. But for me, I was like, “Oh my God”, this is so not New York City”. But I will say that Montreal is an amazing double for New York. It totally pulls it off.

BT: And you got to shoot Miss Sloane in Toronto as well. [Fahy plays the easily deceived Clara]

MF: I did! I loved it. I was up there in February and March [of 2016] for that so it was a bit colder. But I love Canada. And Toronto is awesome. I’m a vegetarian now, but when I wasn’t I found the best fried chicken place in the universe at The County General. I would have a hard time not going back to Toronto just to eat at that restaurant.