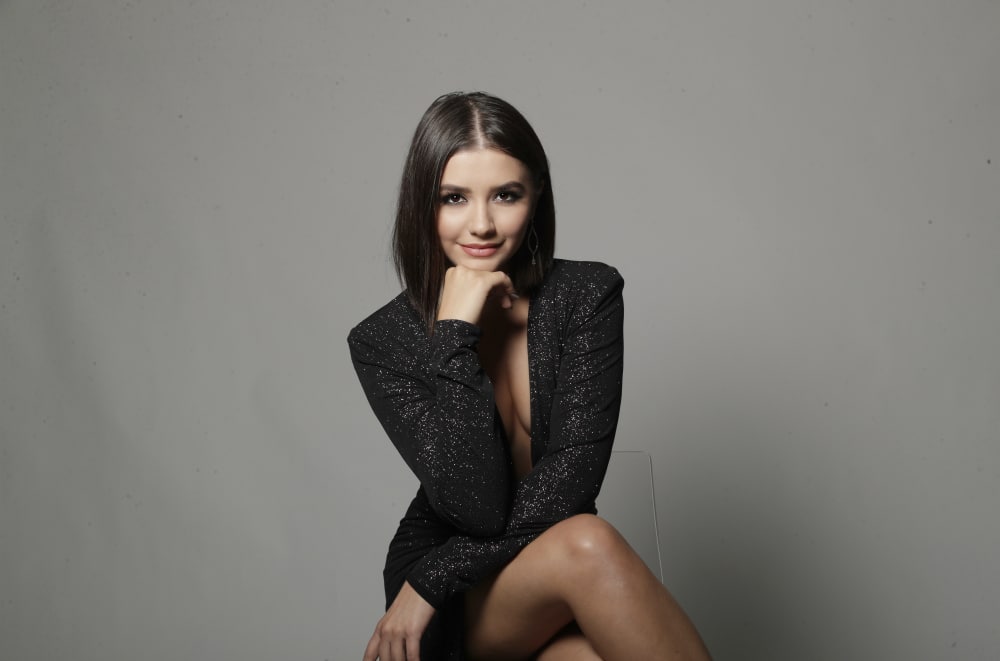 It’s fitting that we would chat with Ana Golja about her experience producing and starring in the film The Cuban (which recently opened the Canadian Film Festival on Super Channel and is now set to open the Lavazza Drive-In Film Festival). We had been tracking the film and her journey for a long time, and in addition, the night before she was set to speak to us, we found out about her 2011 series Clue for the first time. Golja has always been a favourite performer of ours and it was a wonderful experience to finally be able to sit down with her and talk about The Cuban, which is a delightful and heartfelt film.

The following is a condensed and edited version of our candid phone interview with multi-hyphenate Ana Golja of The Cuban.

Brief Take: Hi Ana! How is this producing experience crucial to your development as an artist?

Ana Golja: I was between seasons on Degrassi, we had gone from doing 40-44 episode seasons down to 10 on Netflix. I went from having about 3-4 months of off-time to 6 months of off-time and through that I got really antsy. I wanted to do something else, something creative and expand my horizons within the industry. I thought that I would create an opportunity for myself. I got together with my producing partner, Taras (Koltun), and we came up with this idea. We were both going through turbulent moments within our personal lives with our families. We wanted to do something that would make a positive impact upon people and would share a beautiful message. That was the initial kind of start. Once I had a taste for the producing, I wanted more [chuckles] and I want more of it, still. I get to satisfy the business side of my brain, which obviously, as an actor, is not something that I typically have to use. Producing presented a lot of challenges, but definitely created an environment for me to thrive at.

BT: Had you ever produced on this level prior to this project?

AG: No. Never. Never! This was the first time trying to sit down and even create an idea. Koltun and I truly were there from day one and then I had to think of, I don’t know, how to go about getting anything made, at this point. We need to bring on some great partners who have fantastic reputations, were hard workers, and created good content. Naturally, I went to Sergio [Navaretta] and then later to Alessandra [Piccione] and we really fleshed it out as a group. But yes, that was my first time creating anything and I don’t think I’d want to be part of something in which I am not part of that process. 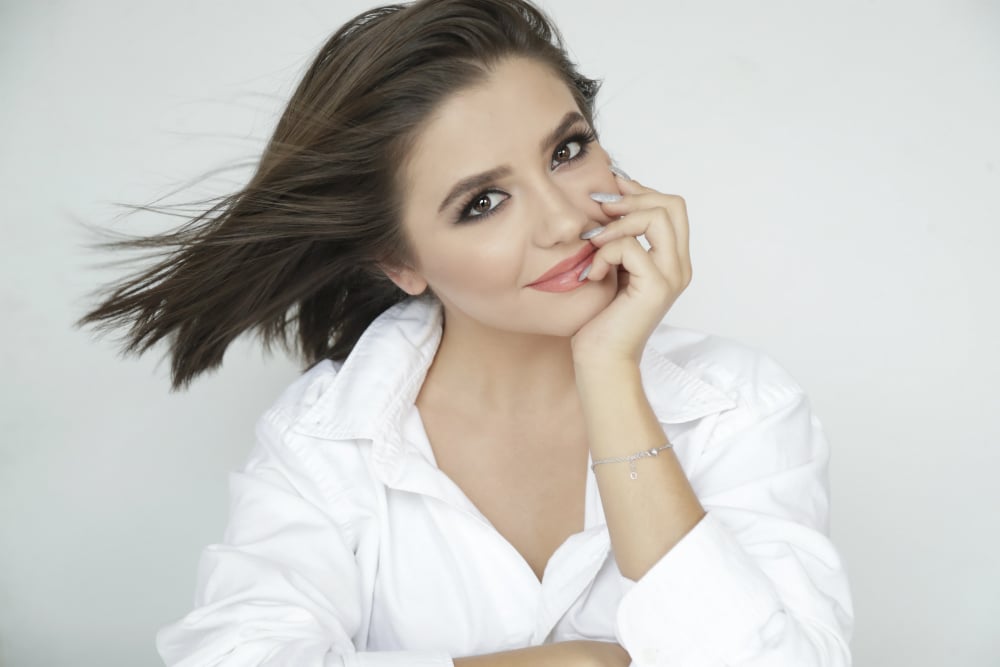 BT: What is most important to you about developing a film that is female-driven?

AG: It was incredibly important because as a female in this industry, it’s very important for me to continue to support and lift females in my industry. That was something that we actively thought about. I know Sergio grew up surrounded by women [laughs], and he also really values the female perspective. His partner Alessandra wrote the script and is also a producer on the project. All of us really actively thought about engaging as many female artists on this project as possible.

BT: Did you in fact stagedoor Louis Gossett Jr. at King of the Dancehall at #TIFF16 to get him to do this film with you?

AG: That’s really a thread of what happened, truly. We did anything and everything to get Lou on board. The part of Luis Garcia was really written with him in mind, he was the be all and end all. We went to his business manager, his lawyer, his friends, I went through Monique [Moss, her personal publicist], [laughs], and then finally, the last kind of thing that we would thought would tip it over the edge was…meeting him in person, creating a circumstance for us to actually meet him. Once we got word that King of the Dancehall was going to be here and he was going to be here in person, we thought, “we can’t waste this opportunity”. [laughs] We couldn’t get an actual meeting through the regular channels, so we bought tickets to the film, waited behind the stage door, and then shoved our script and our pitch package into his hand. At that point he was like: “Yes. I know about your project, I know“, with a smile on his face and that kind of gave us the reassurance. From there it was smooth sailing. 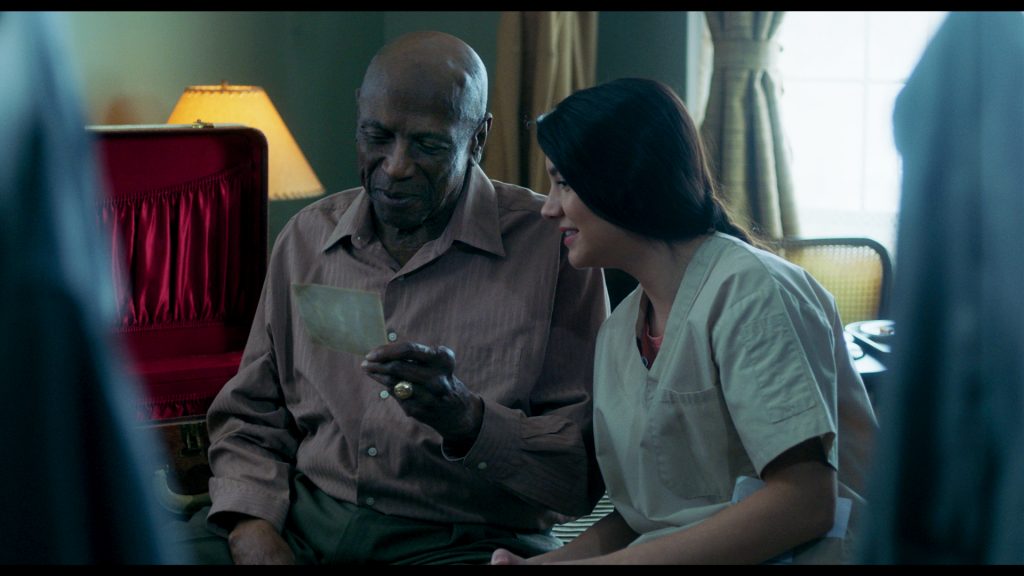 BT: Tell me about your character development within the film.

AG: Well, obviously, I had the advantage of helping to develop the project. [laughs] I really got to live with the character and develop her in a sense. Sergio (Navaretta) and I had a lot of discussions, especially about her journey and her arc and her finding her passion for life, finding her voice, and Sergio is such a phenomenal artist and storyteller. For him, something as simple as colour – we see even with Mina’s wardrobe, with her make-up, you see that evolution from really drab and muted. By the end, she has on red nail polish and a red bandana. We really see that growth with the character.

BT: What did you like best about shooting with Jonathan Keltz and Giacomo Gianniotti?

AG: Both of them are consummate professionals, they were so much fun and always really prepared and really focused on the work. You don’t get a lot of actors, especially on a lower-budget Canadian film, who truly care about the story that they’re telling and the characters that they’re playing. And they were very opinionated. They had constant conversations with Sergio in terms of how to approach certain scenes and their characters as a whole. They were absolutely wonderful to work with. 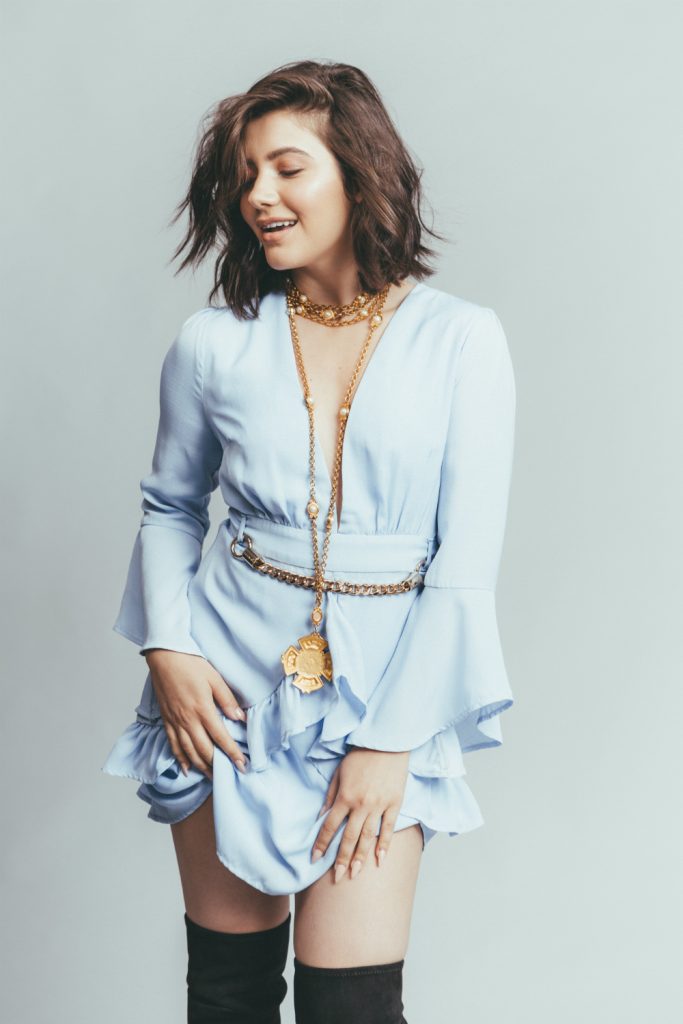 BT: What did you enjoy most about working with Shohreh Aghdashloo?

AG: She is truly a whirlwind. She’s a force, she’s a force to be reckoned with. [laughs] She has so much energy and so much love for her craft and for people, and she was honestly probably one of my favourite people to ever work with, ever. She’s incredibly talented.

BT: Who else would you put in the ‘favourites’ category?

AG: Oh my goodness! Lou, of course. [laughs] Lou, certainly, I worked with John Travolta recently and he was also an absolute delight to work alongside, along with Fred Durst, who directed that film, called The Fanatic, such an artist. Yeah, it’s a pretty long list. I’ve been very fortunate with wonderful people and I know a lot of people say that and they don’t always mean it, [laughs] but I really have been lucky. 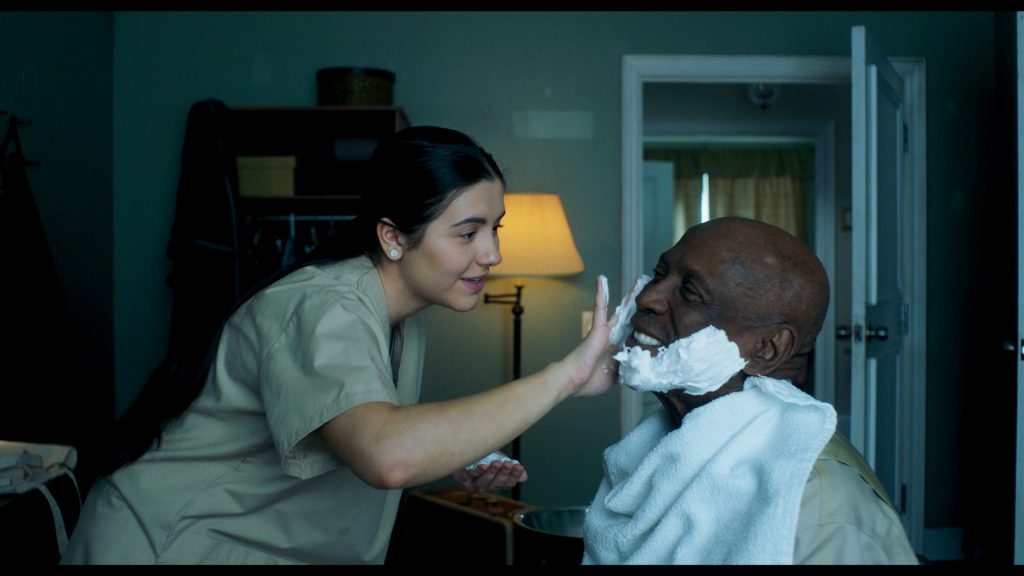 BT: What was the experience like of working on that film?

AG: It was a dream come true. When you tell a musical lover like myself that you’re going to be working alongside John Travolta? I mean, ah! Can’t get any better than that. Yeah, the experience overall was fantastic. Fred kept the morale on set just light and fun and especially since it’s a thriller, [chuckles] it’s not exactly your fuzzy, uplifting film, but the environment on set allowed everyone to completely relax and have fun making this film. That was probably the best part of it, but yeah, definitely an entertaining film, not something that you would see typically.

BT: Why is working with ME to WE and being charitable important to you?

AG: Ah! For me, as an artist period, I want to make a positive impact on people’s lives. Whether that is through the visual medium or through my music or through volunteering, I find any way that I can to share beautiful stories and to give back to communities. That is I think our purpose as storytellers in general. Every decision that I make, every song that I write, I try to have that in mind and I feel a bit of a social responsibility to give back as well.

BT: What role does writing and performing music as Muazana have in shaping you as an artist and what is your inspiration for your next album?

AG: Well, this new kind of direction in which I am going is definitely a departure from Epilogue, (her previous LP), sonically. Very, very different. I am trying to use the fact that I am a performer and performing is my favourite thing to do. I grew up dancing, competitively, I wanted to do something that’s going to make people want to move and dance, especially through this COVID-19 situation, I want something that is fun and uplifting. People are sitting at home and feeling really down and depressed, that’s a big element of the new direction in which I am moving, musically. 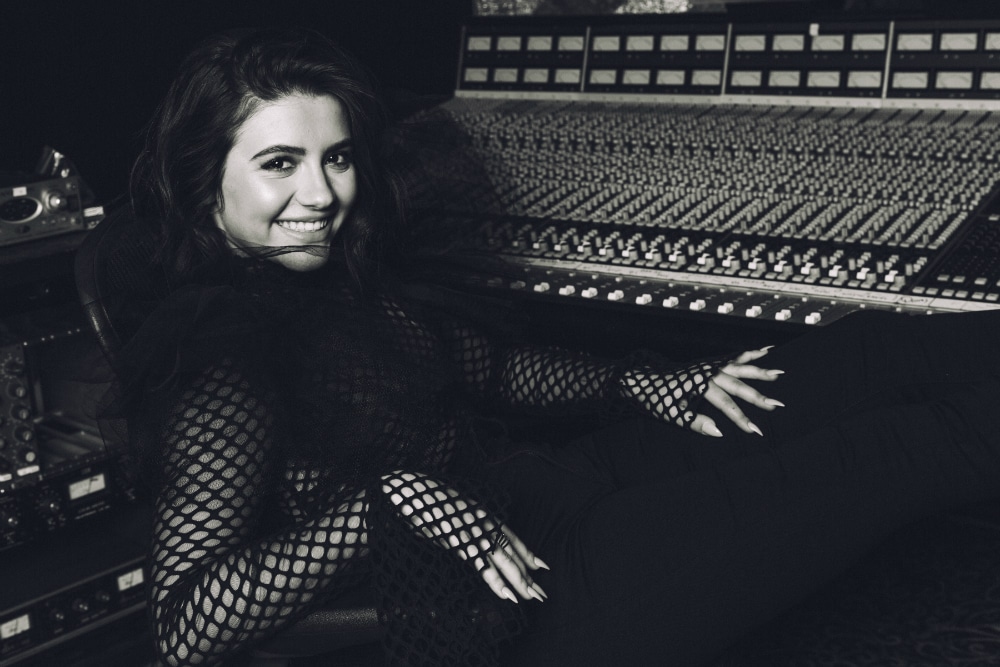 BT: You were a 19-year-old producer, female producer at that, when you started this project. How many times did people stand in your way or try to underestimate you in this journey?

AG: I’ve lost count and it’s still happening constantly. I’m still dealing with it, even at 24 now. It really was a whirlwind, especially being on Degrassi at this time, being on a teen soap opera and being a quote unquote producer with nothing to show for it…Yeah, being taken seriously was very difficult, but unfortunately, and now I’m getting better, but I almost found that I had to be somebody that I wasn’t. I had to put on my big boy pants and be a little bit more aggressive and be a little bit more proactive, which is not a bad thing, but… I found myself constantly having to try harder and having to address people in a certain way to not give them another impression. Many different little things that when you add them up, it can really change you as a person, especially when for as long as we did, we’re developing a project. It took roughly four years from inception to finished product.

Now, now that I actually have The Cuban under my belt, I feel like it’s gotten easier to have conversations about being a producer and being able to develop a slate of projects, now that I have something to show for it, but initially, it was a bit of a chihuahua syndrome. You know what this is? A little dog that has to bark to prove its ferocity. But yes, we’re getting better and I think that with every day that passes, the industry is shifting.

BT: After this film, now it says in your bio (however, removed since our call!), Ana Golja – Producer.

AG: Yeah. I use that word loosely still. [laughs] I don’t know if I deserve that title yet, but we’re working on it.

BT: Between stagedooring and doing much more than this has more than earned you the title of producer.

AG: [laughs] Thank you. I appreciate it. [laughs] 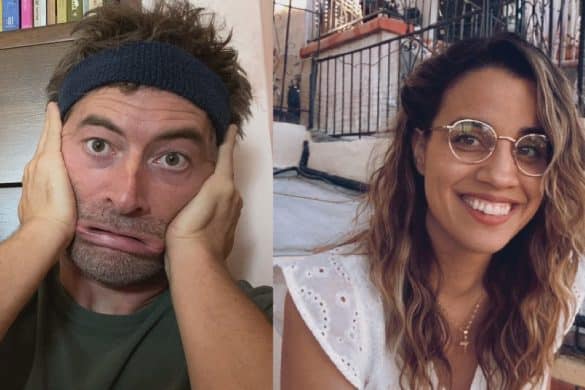