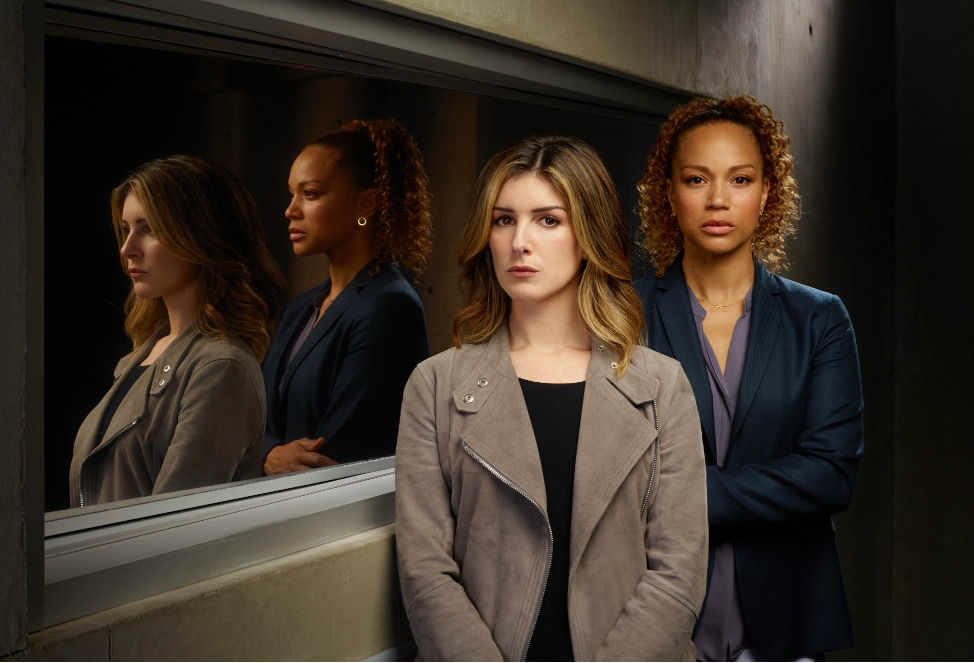 The new CTV drama The Detail is a female-driven detective procedural from the team behind Saving Hope and Rookie Blue. The show stars Shenae Grimes-Beech as the slightly less than put together Jack, and British actress Angela Griffin as her partner Stevie. In addition, The Detail features the incomparable Wendy Crewson as their boss Fiona.

Grimes-Beech and Griffin fall into such an easy rapport on and off screen as we sat down with the pair recently at the offices of Bell Media. They were forthcoming about the direction the series will be taking, shared some really interesting on-set observations and were a refreshingly fun team to interview.

Brief Take: One of the main takeaways from The Detail is that representation matters.

Angela Griffin: Of so many departments, whether it be age, gender, ethnicity, it really does, but it doesn’t do it in a box-ticking kind of way. Everyone’s deserving of their place in it.

BT: And it is presented in a non-judgemental way.

Shenae Grimes-Beech: Yes, exactly. It’s not that picture perfect, super positive portrayal of people, it’s real human beings. It’s nice and refreshing to see that reflected on camera, because it’s like, “ah, man, that’s with what I identify!” *laughs* Life isn’t perfect and we’re not perfect, so it’s not pretty all the time. I think it’s really exciting to be a female on camera. Just the most tiny details but I think it matters to be in the hair and make-up chair and not feel like we need to walk away and you’re this Glamazon…Who spends so much time in the morning doing that?! Every little thing they’ve managed to humanize these women.

BT: The show is also refreshing in the presentation of relationships.

AG: I think that the more you can portray things on television and say that they’re not a big deal, people who sit and watch shows learn how to react. I really come from that school of normalizing situations that with some people might struggle.

BT: Is there anything that you took with you from your earlier roles?

SGB: I feel like I’ve had to abandon ship on this one.

SGB: Just everything, the way that Jack walks, talks, everything, it’s completely abandoning mannerisms that I have had to uphold from my past characters. The two main ones, obviously, being Darcy on Degrassi and Annie on 90210…

AG: I was a Darcey in Cutting It.

SGB: And I don’t even know any Darcys. To me it’s not a common name, that’s so funny.  To answer your question, Jack is far from a lady and she’s so unapologetically herself and I love that about her. *laughs* I’ve been able to go to the opposite end of the spectrum which has been so fun for me.

AG: The fact that Stevie speaks with this completely different voice, in this different country, in this different system, I suppose what I had to do was just absorb the Canadian culture, and this city and just how things work here. The culture…we all speak with the same words, but there’s quite a lot of differences. So I had to abandon everything I thought I knew about the police service, about the metropolitan, because it is very different here. What I could draw on from Stevie is being the main breadwinner in a household with two children who are in their tweens and teens. That I could draw on constantly, every day with my life, that struggle. Stevie is so much closer to me, but so much further away from anything I’ve ever played.  In the U.K. I usually play very working-class, Angela “Down to Earth” Griffin. That’s how I’m perceived at home and this is very different.

BT: To what extent is the city of Toronto like a character in the show?

SGB: Well, I think people in Toronto will like it. *laughs* While we never mention that it’s Toronto, it’s supposed to be like this “anonymous North American place”,  but we don’t shy away from it. The CN Tower is right there, it will be fun locally for people tuning in to be spotting everything.

AG: And I think that until I came here, I had no idea how cool it is, like it’s really cool to see the food scene, the restaurants, the art, the music, the theatre, and it’s such a culturally rich city.

AG: And worldwide it needs to be shown as being such, and I think that The Detail shoots it in a really cool way. Some of the cool shots like the aerial shots show it in such a great way. One of my favourite things about the show is that each episode is and has the capacity to be different. It’s formatted, but it’s formatted differently. I think that is a real draw of the series.

THE DETAIL airs Sundays at 9 p.m. ET on CTV and CTV GO, beginning March 25th. Canadian viewers can get a First Look on CraveTV™, with episodes available to subscribers the day before (Saturdays) their broadcast premieres. For more information, please visit CTV.ca.