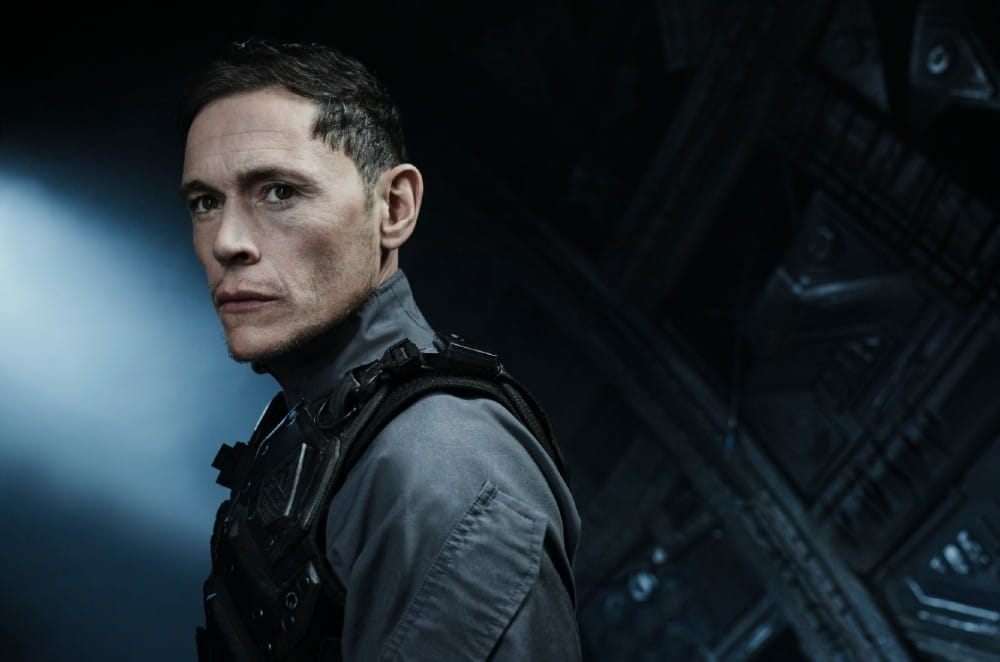 Burn Gorman is an actor that has been been giving searing performances for a long time (Turn: Washington’s Spies was brought up during our roundtable, Game of Thrones comes to mind immediately, and also a long line of movies produced by Legendary Pictures). So when we first learned that he would be joining the cast of The Expanse in season 4 as the complicated Adolphus Murtry, we knew that we definitely wanted to interview the craftsman.

He was joined on the international junket day for the Amazon series by the writer of the books on which the series is based, one half of James S.A. Corey, Ty Franck. We had spoken to Franck the night before in an intimate setting (following a screening of the first two episodes of the new season), and the next day brought two sets of interview with him – a roundtable, followed by a one on two interview to go more in depth on Gorman and Franck’s fascinating work.

The following is a condensed and edited version of our sit down with Burn Gorman and Ty Franck of The Expanse.

Brief Take: Burn, you previously have filmed in Toronto, correct?

BT: You were here for Pacific Rim (as well as Crimson Peak)?

BT: How involved were you about the series prior to joining in the universe of The Expanse?

BG: It was difficult to get Syfy in the U.K. However, I hadn’t read the books, but I watched season 1 and season 2, so I was a fan. And in the fan consensus in which I was involved, it was BSG (Battlestar Galactica), there was a quality about it. And obviously there was, and you’re probably so sick of hearing this, but when people go: “Oh, well…”, it had been thought about….the way things worked, it had this tone of seriousness and of truth about it. As an actor coming into it, I was like: “Oh, this is one of the good ones”. It already has a tone and a consensus of quality about it.

BT: Do you feel like a disruptor a little bit? Perhaps that Murtry is a bit of a disruptor?

BG: I don’t know, dude. I usually play characters who are morally questionable or who are coming in to stir things up a little bit. So actually, it was a bit of a nice challenge to come into an already established cast and also one that had been, you know, cancelled and this was kind of a new incarnation, Lazarus-like, and it felt like it had momentum and passion and everyone was really hyped to back, so it was a pleasure to join.

Ty Franck: Well, you played such a nice guy on Game of Thrones.

BT: Was there a connection there? [prior to writing The Expanse, Franck had worked as the personal assistant to George R.R. Martin]

TF: No! Actually, Burn and I were just talking about this, that I had stopped working for George before he’d did his bit, but we never met. If I had still been working for George, we probably would have met there.

BG: Yeah, it was great. It was in Ireland, and the cast like King’s Landing was Croatia or Spain, and the Night’s Watch was definitely outside Belfast and shitty weather. But yeah, but also great to be involved in something that has a source material already there, people have strong opinions about it. The character in Game of Thrones, he was kind of an amalgamation of a couple of characters that didn’t have much presence. But people have strong thoughts about Murtry, don’t they? I can only hope that I don’t disappoint you, you can only bring what you bring.

TF: I’m surprised by the number of people that read that book and who are incredibly sympathetic to Murtry. I see people online who say “He was right, his people were murdered, he was right when he killed the Belters. They were terrorists, they were plotting murder”.

TF: And you get people who are very sympathetic to that, even though, definitely, he plays an antagonist in classic mode, but people buy his reasons. They think he’s got a good point.

BG: But what’s great that in this world, like in Game of Thrones, there is perhaps no clear moral centre and protagonist.

TF: I mean Holden (Steven Strait) is sort of the classic heroic trope, but we’ve beat the stuffing out of him.

TF: He gets more cynical and less naively idealistic as the show goes on, so yeah!

BG: [in low menacing voice] “Beat him down!” [in normal voice] We like watching that, don’t we? We like seeing the characters go through things.

TF: We love forcing people to see the opposition to their worldview. And watching how the characters react. We try to do with everyone. What changed about Murtry in my head as we shot season 4 and working with Burn is the thoughtfulness. And I don’t mean ‘thoughtfulness’, in that you’re kind to people, he’s a guy who really is very analytical and I hadn’t really pictured him that way before, but he’s always planning. He’s almost never impulsive. [to Burn] I think that you play that way in almost all of your roles, you have a sense that you are a guy thinking all the time, you have something going on behind your eyes, so that changed my perspective on Murtry a little bit. Nothing about Murtry this season feels like an impulsive act, everything feels like an outworking of a deeply methodical mind.

BG: Yeah, when I first heard about Murtry, it was definitely much in the Stephen Lang in Avatar, military, military, military, and obviously, I’m slight and I’m whatever, but I suppose that doesn’t mean that you don’t get amazing military officers that are tactically, their strengths are that they study history, they adore Napoleon, and they are intelligent men and tactical men. Murtry, in particular, he has a strange moral compass. It’s interesting to play. 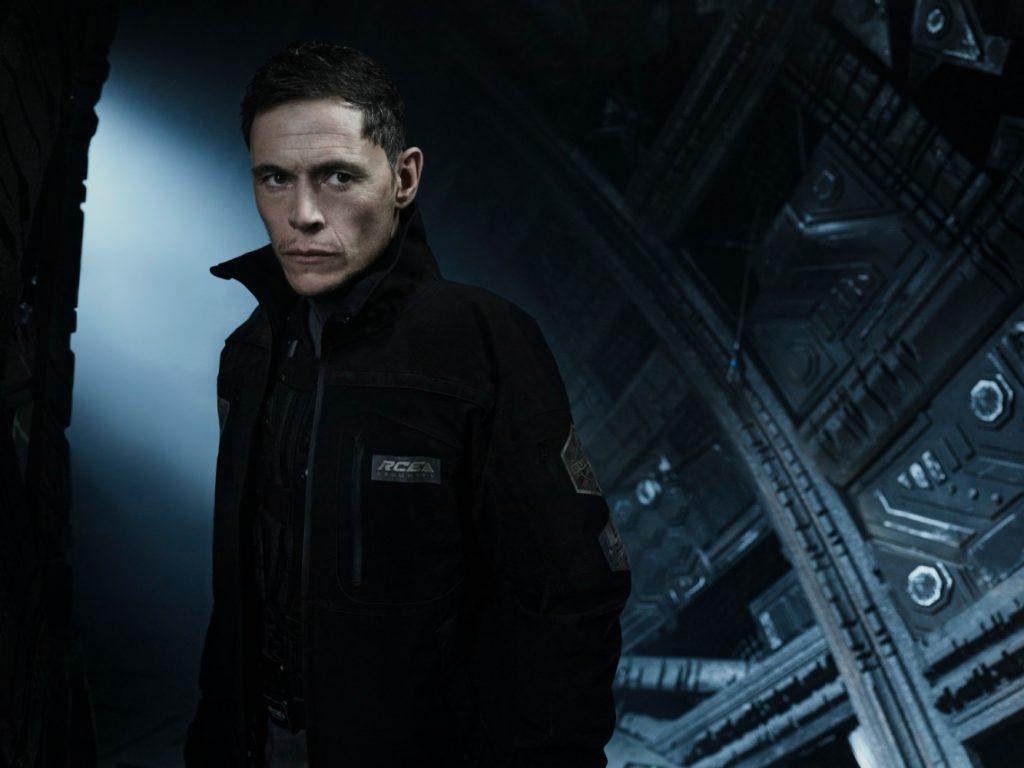 BT: How do you get into the heads of the characters that you play, do you go to the source material?

BG: I try to avoid it. I try to avoid source material because basically, I can’t fulfill everyone’s idea of the character, only mine, and hopefully the creator’s, to create a moving target, an amalgam, really, of different pieces from the scripts that I get, mainly to look for the truths in something. Yeah, I don’t know, I was entering a very already established world, but I had the advantage with the storyline that it was like going to a new planet, so it had this feeling of “The sky’s the limit” and everyone is starting at the same point, at a fresh point.

BT: Burn, as Murtry, your physicality is very unique. Was this a choice that was by design?

BG: Yeah, it was quite funny, when we started off, it’s a full kind of prosthetic covering the leg with its own hair on it, and I sort of only realized after a while [chuckles] that the cast thought that it was my 10 inch long hairs. [laughs] They thought that I was some sort of mutant and that always is interesting to me, physical impairment.

TF: I think that to directly answer your question, as someone who watched Burn working, there is a physicality to Burn. The way he moves, he moves like he’s the biggest guy in the room. And I would say that there is an intimidating element to the way that he played Murtry, that he always walks into every room like he’s absolutely in control of that room. There’s no question in his mind that he owns that space. And that shows up really well on film. When you see the people that are able to resist that, they feel unusual. When Amos isn’t intimated by Murtry, it makes things feel weird, because everybody else has been so clearly intimidated by this guy. There’s a physicality to the part that definitely changes the way that you see him.

BG: It’s a pleasure to come work with people who are ready to work, it was pretty effortless, I found it easy to fit in, it’s a pleasure, you know, a real pleasure.

The Expanse season four is now available on Prime Video