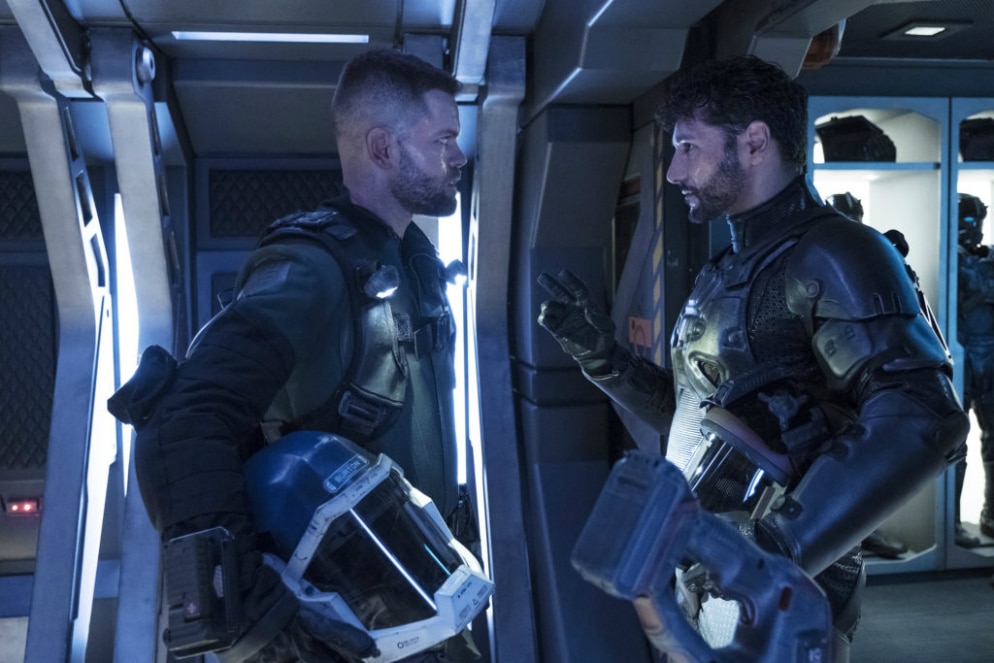 Cas Anvar is a fascinating character study. We met last week in the lobby of a downtown Toronto television studio and walked over to a nearby coffee shop in a blizzard. Anvar was smartly dressed in a suit and vest and was on his way back to Los Angeles that day.

Though we have seen the first episode of Season 3 of The Expanse, we don’t want to reveal any spoilers, but let’s just say that Anvar has a goosebump-inducing monologue that is going to open up layers of his character. What we instead focused upon in our chat with the talented actor was the journey that had led The Expanse to become the genre-bending show that it is today.

The following is an abbreviated and edited version of our captivating interview.

Brief Take: I read that you’re a fan of both Star Trek and Star Wars.

Cas Anvar: I grew up on both of those.

BT: Do you see elements of Han Solo or Jean-Luc Picard in Alex?

CA: I think Alex has got a little Han in him. He’s kind of a blend of Han Solo and Wash from Firefly. He’s a bit of a swashbuckler, he’s a bit of a showoff, he’s a bit introverted, he’s reserved, he hangs back, he’s a wisecracker, but he’s very emotional as well, in the same way Wash was, and he’s very much the glue that keeps the family together. When things are falling apart emotionally on the Roci, he’s the one that has to step in. Because nobody else on the Roci is thinking about the group dynamic.

Everyone’s worried about their own story, their own tragedy, they all have incredibly broken, fractured paths, we’re all busted up in some way. The rest of the crew’s damage and baggage kind of doesn’t allow them to think of the family and keep the family together. They’re all worried about their own personal stories or the love affair of Holden and Naomi or Amos looking for his destiny and his journey. Alex, that’s the only thing that’s worked for him – this new family. That’s the most important thing to him, that and the Roci, which galvanizes his identity, he really didn’t know who he was until he got into that pilot seat. I realized that this is what I was going to do, what he was meant to be. The glorified bus driver evolved!

BT: Is it difficult to do the Texan accent?

CA: *laughs* It actually wasn’t that hard for me. It’s an accent that comes easily to me and the character of Alex Kamal, he’s born on Mars, and the creators have decided that the Martians are, the first colonists from Mars are from East Asia, Asia and Texas, because they figured those are the people who are going to be able to create a new community, a new culture, a new world and conquer that hostile territory. It’s very similar to the Wild West of the United States. So those few cultures and races are of what Alex Kamal is a fusion.

So even though he’s Pakistani genetically, his culture is influenced by the Texans that landed in the Mariner Valley where he lives. So that was a fun aspect of the character that I really loved because it’s a whole perspective, Texas and the South of the United States. Stressful events and circumstances are handled in a very different way by someone who comes from the South. They’ll have an expression and a witticism for every situation that is just designed to take the steam out of things, to kind of calm things down. It’s never that big of a deal for a Texan. There could be a nuclear bomb going off over here and there could be like aliens over there, and it’s just like business as usual. I really like that aspect of Alex because everyone else, when they’re all panicked and freaking out, he’s trying to keep the team together, he’s trying to keep the calm and he’s trying to get the emotions out of the situation. I really enjoy that.

BT: What can you say about the journey so far?

CA: The rest of the actors on the team, especially the Rocinante crew, we have become incredibly close. We’re all so different and it’s trying to figure out how we all fit together on set and off set, so yeah, that whole journey…when we go out to dinner, it’s really like the Roci crew going out to dinner, the personalities around that table are quite extreme. Between me and Wes [Chatham] and Dominique [Tipper], and Steven [Strait] and Frankie [Adams] and Shohreh [Aghdashloo], it’s like a smorgasbord of life. There’s no two people in there that are even remotely similar. We love each other, we all respect each other and we all have a common goal. We all love the show, we love the stories and we all come from incredibly diverse and different lives and backgrounds. We have military people, we have dancers, we have Shohreh, who came from Iran as a stage actress, myself from Canada as a Shakespearean guy, Steven, who comes from Greenwich Village, Wes, who really kind of came up in the rough side, and we all have this common goal towards telling this story and that’s what bonds us. We all feel so passionate about it even though none of us share a common background.

BT: What about your popularity worldwide?

CA: We’re popular all over the world. We’re huge in Germany, I think the German fans really love it. And I get tweets from Australia, from London and parts of Asia. The diversity in the show has made it very attractive all across the world. I’m very proud of the show in the sense that everyone in the show is a very interesting mix of people. There’s not a lot of white people on the show. And what amazes me even more is that the women in the show are all strong, and how many shows do you know that have five?! In season 3, it will be eight badass, butt-kicking women, none of whom revolve around a man. That doesn’t exist right now on other shows.

Every single one of our female leads is completely independent and completely essential to the story and to the progress. In many cases, the show would end, everyone would die if it wasn’t for the contributions of these women, and up to this point, especially in season 2, none of them have been white. They’ve all been non-white, badass, strong-willed women. And I have a feeling that contributes significantly to the powerful line that the stories have been taking, because there is a very balanced approach to the storytelling, it’s not a purely linear, kind of male perspective. The story is very balanced, in terms of Avaserala, Naomi Nagata, and once Bobbie gets introduced. The Bobbie character and even our newest addition with Drummer [Cara Gee]. Even though Steven, James Holden, is our Number One, our lead, along with Miller in the beginning parts of it, very powerful women that have very strong perspectives and opinions contribute substantially to the overall destiny of the show.

Win Run of Engagement passes to You Were Never Really Here!