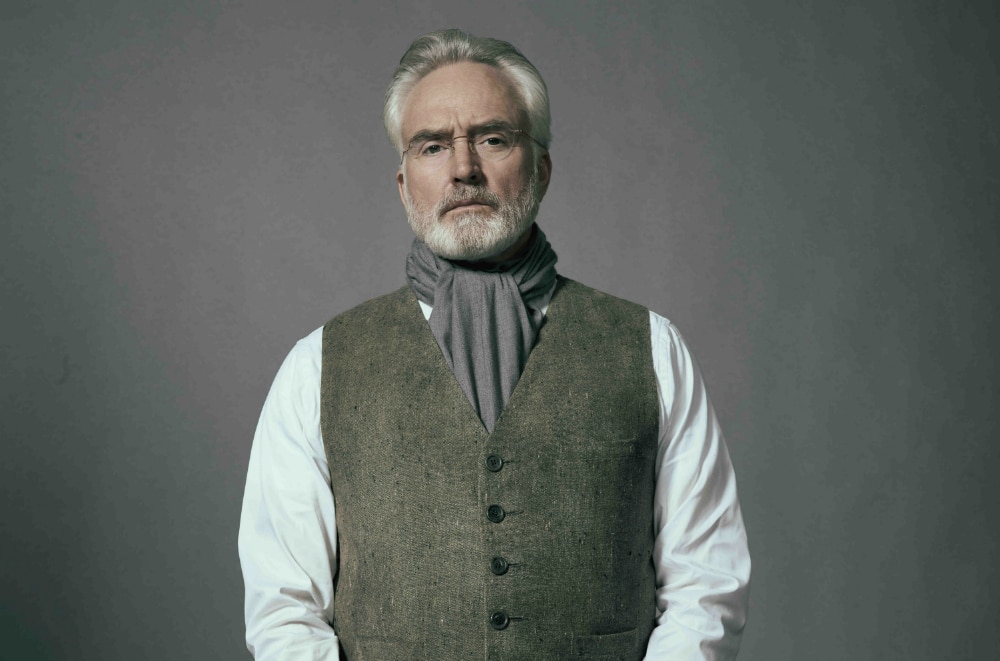 Aside from appearing in films and shows that were crucial in our development as humans and amazing projects to boot (Adventures in Babysitting, Happy Gilmore, Kate & Leopold, The Sisterhood of the Traveling Pants, The Cabin in the Woods, Get Out, his work with Aaron Sorkin), Bradley Whitford is also a bit of a legend as well. So it was our utmost ideal to speak to the portrayer of Commander Lawrence in season 2 and now season 3 of The Handmaid’s Tale. The somewhat staccato nature of how he speaks and also what he has to say revealed so much about the world of Gilead from the creator of the world (on the show that is). Coming up this fall he will star in as well as executive produce the highly anticipated NBC musical series Perfect Harmony, opposite another Brief Take favourite, Anna Camp.

The following a condensed and edited version of our recent phone interview with the incomparable Bradley Whitford of The Handmaid’s Tale.

Brief Take: Commander Lawrence has a sort of contradictory nature about him. How did you tap into that duality?

Bradley Whitford: This was really one of the most fascinating experiences. I love to act but this guy is just…there is so much contradiction in him. He’s not at a static place, which is what makes it so interesting and volatile. So a lesser writer on a lesser show would have made it more one-dimensional and given someone who would have some sort of moral epiphany and quickly slipped to the right side of history. And it was interesting- we were at the U.N. talking to people about issues, women’s issues worldwide and places in which there is horrific repression and refugee issues. And it was interesting, one of the things that they talked about is that people react very differently and very inconsistently when they are forced to function in these totalitarian systems.

Most of the time, when I think that we’re trying to create a character, there’s kind of a narrowing that happens in your mind, you should get clarity about a character, and when it is this guy, it is really the opposite, and I wish there was another word for it. [laughs] It doesn’t feel like acting, because it’s a question of opening up the possibilities and embracing that this guy has contradictions. He’s incredibly frustrating to watch but I think that serves the ultimate motivation for all of us doing this show, which is to communicate what it is like individually for June to navigate this horrible situation.

These people at the U.N. were saying that statistics are meaningless, but the story of one person changes lives because people can connect to it. Hundreds of thousands of refugees from Syria are being killed, they’re fleeing across the Mediterranean, and it doesn’t register until we see a three-year-old toddler drowned on the beach. I think this show is unfortunately more and more relevant every day. If you told me two years ago that multiple States would be proposing a harsher punishment for not carrying a child that is a result of a rape, that this would be dealt with more harshly than for raping somebody, I would have thought that you were a liberal conspiracy theorist hysteric, but it’s happening. So it’s the pretentious way of saying that I think that the joy of this is creating a realistic contradictory obstacle and foil and ally, potential ally. 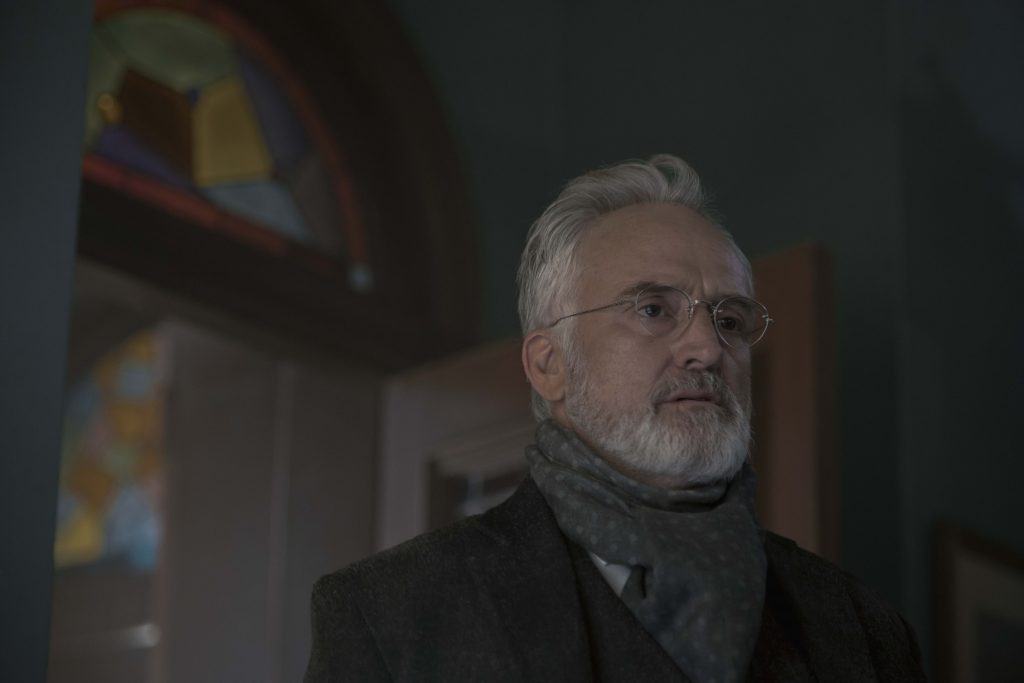 BT: On the show, your character used to make sweet mixtapes for his wife. What would be a song that reminds you of The Handmaid’s Tale?

BW: I could tell you what number one on that playlist would be, it would be a Blues singer, Koko Taylor, singing ‘I’m a Woman’, which is stealing back from the male-dominated Blues world, an anthem of proud gender strength. [laughs]

BT: What about the importance of costumes? I liked that the incomparable Ane Crabtree recently shared a picture from your first costume fitting for the show.

BW: One of the most interesting things to me, [laughs] every element of the show…that was the most interesting, she’s a genius. That was the most fascinating costume fitting that I’ve ever had. And it was a lot of talk and back and forth about this guy about whom we didn’t know that much. I remember I was very interested in the idea of the scarf and I think it was because [laughs] this is how actors get interested in ideas, I wanted there to be an in-your-face fashion statement about this and a brazenness, and at the same time, there’s a lot that is hidden from him. I think there’s something rash and antithetical about how animals and people all expose their necks when they are wooing—people do it in bars or consciously tilted their heads and animals do it. And I thought that it would be very interesting to combine [laughs] a weird rationale, but combine a brazenness with an emotional constipation sort of hidden. An implication of being forthcoming, but a refusal to actually do it. So that’s from where the scarf idea came. [laughs loudly]

BT: You work so hard to embrace projects by female directors and creators.

BW: Believe it or not, I think that it was Warren Buffett who said “it was completely insane that we’ve excluded the talents, perspectives and stories of 50% of the population, by and large, forever”. That is changing and there is such an opportunity in that because new stories and new perspectives are things that really register, the perspectives to which you are not used. We’re nowhere near where we need to be. It reminds me, there is a John Lennon quote in his last interview, in which he said: “When it comes to equality between the sexes: we’ve taken a laxative, but we haven’t taken a good shit yet”. I would say that it’s true and it’s absolutely terrifying that culturally we seem to be regressing. And there are horrible statistics in terms of Writers Rooms, I think women are something like 17% of Comedy Writers Rooms. I don’t understand it. I tend to…everyone I work with [laughs]…my manager, for some (reason), I prefer to work with women [laughs] anyway.

BT: Tell me about working with Elisabeth Moss, who you first started working with on The West Wing when she was 17 years old.

BW: I can’t begin to express my admiration for what she is doing. She’s obviously this great young actor and then to come back and see her in the midst of her doing what I think is once in a generation. I think she’s doing Sophie’s Choice, the series, I mean this unspeakable obligation to be emotionally dilated and vulnerable relentlessly, and then on top of that, she is nothing but kind, which I think is important and important in creating a place in which people can create. She is a touchstone for this, she’s not just “Oh yeah, I’ll take an Executive Producer credit”. She is the touchstone, she is on the ground floor of story discussions, script discussions, notes, when we’re going to shoot it, lenses – she is…it’s stunning what she is doing and doing it in an almost effortless way, it’s mind-boggling to me. 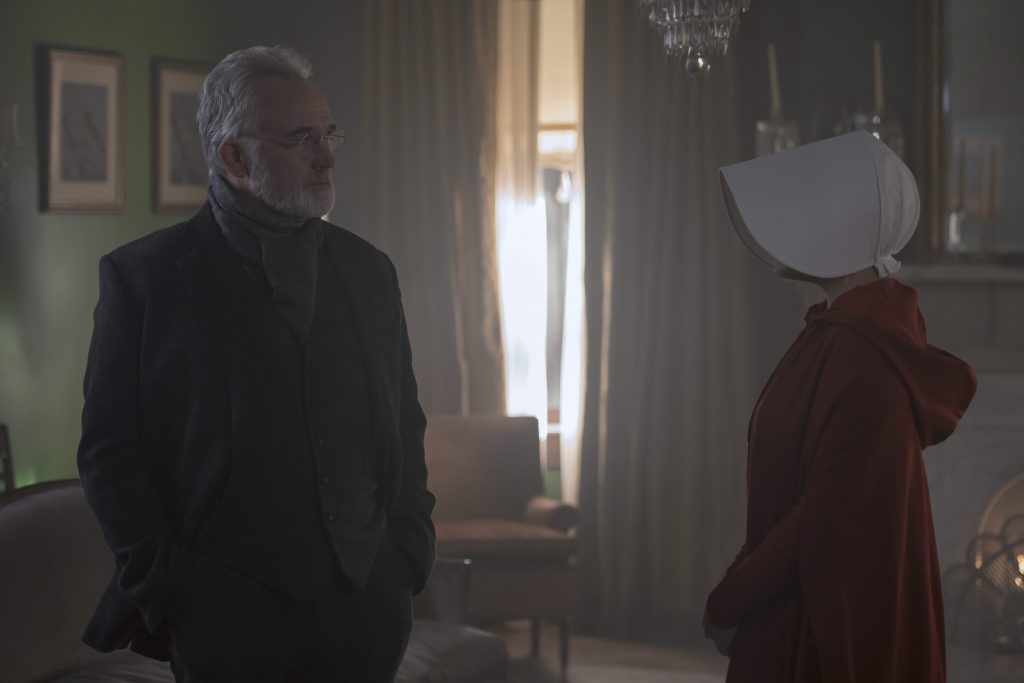 BT: Do you think that art changes the culture?

BW: Yes, I do. I worry that people who share my political beliefs don’t understand that I think that politics is the way that you create your moral vision. Will & Grace helps a lot, but it doesn’t get the job done until you have purpose,
and culture won’t help you if you have a pre-existing condition. But I think that it is very important and I think that in a very difficult world filled with cruelty, we tend to turn off and statistics get dismissed. I think it’s very powerful and can change the world when you focus on an individual experience like June’s experience navigating Gilead. Absolutely!

BT: What is something that you would like an audience to respond to for this character?

BW: What is interesting about this character is that there is nothing linear about the trajectory and there are constant contradictions with it. I guess I want an audience to know that the way the writers and the creative team, the writers may know, I don’t think that the writers know where we are going to go and I guess I’d want the audience to know that. [laughs] I can’t figure this guy out yet either. So it’s very interesting to think about where he is going to land and that sort of lack of knowledge about where he is going to go is what makes it really interesting and really dangerous for June.

New episodes of The Handmaid’s Tale are released every Wednesday on Hulu. Season three of the hit show airs on Sunday nights at 9pm ET on Bravo in Canada.