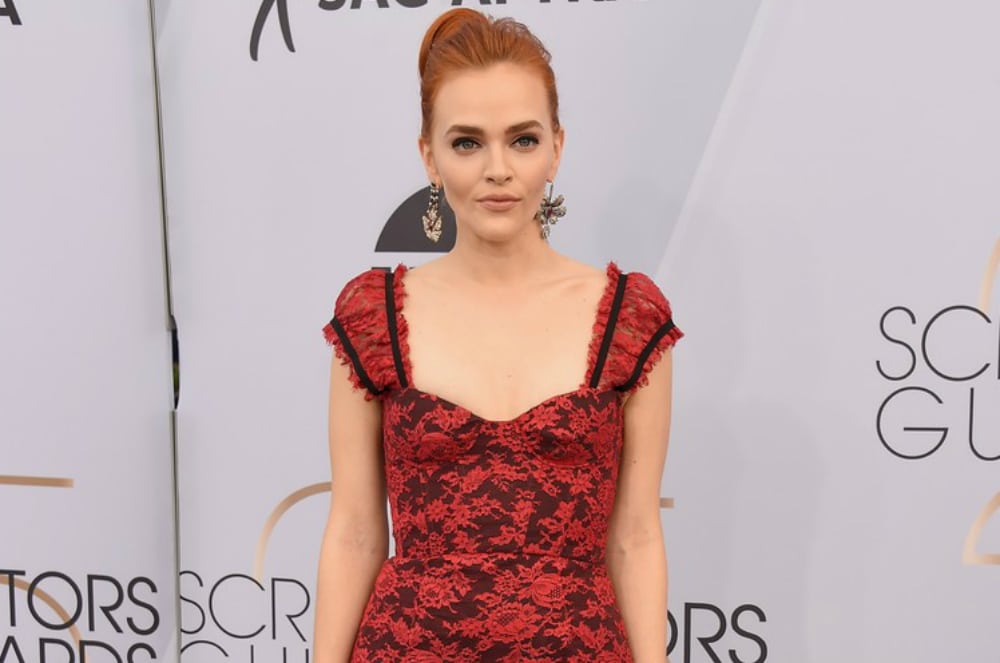 Asking to speak with Madeline Brewer for our second annual The Handmaid’s Tale press day was an automatic priority. Brewer was a spirited, lively conversationalist in our previous phone interview, and in just over a year, the actress has turned in some astounding performances (notably in the season 2 episode ‘Women’s Work’, and in the Netflix film Cam). Both present an incredible canvas for which Brewer’s strengths shine and she delivers stellar work as Janine in the new season of The Handmaid’s Tale, which premiered today on Hulu.

The following is a condensed and edited version of our latest interview with the joyful Madeline Brewer.

Brief Take: The episode ‘Women’s Work’ in which you sing to your baby Charlotte and nurse her back to health really affected us deeply. How did you feel filming it?

Madeline Brewer: By the end of that episode, let me tell you, I was a mess. I was a mess and a half, when it’s just me singing through the end of that episode. Oh my God, it makes me want to cry right now, just pure, pure beauty of a mother singing to a child, it’s like [choking up] I love it, I love it, I love it. And I’m not going to make myself cry, but thank you for saying that about that episode. It was such an important episode to me. Janine, I think at her most pure and her most true to herself is when she’s with her baby. When we see her at her absolute best, she’s with that child.

BT: Did you come up with the idea to sing the song?

BT: It’s very defiant when such a beaten down character smiles so big. How do you tap into Janine in this way?

MB: Well the writing is so brilliant, but it also comes from a desire to…[‘Smile’ from Charlie Chaplin] [speak sings] “Smile, though your heart is aching, smile even though it’s breaking. When there are clouds in the sky, you’ll get by”. That song was super big for me in finding Janine, which is that if you’re hurting, you smile, if you’re happy, you smile, if you’re scared, you smile. It’s a coping thing for her, I think that it’s like “everything will be okay” if I smile through it. 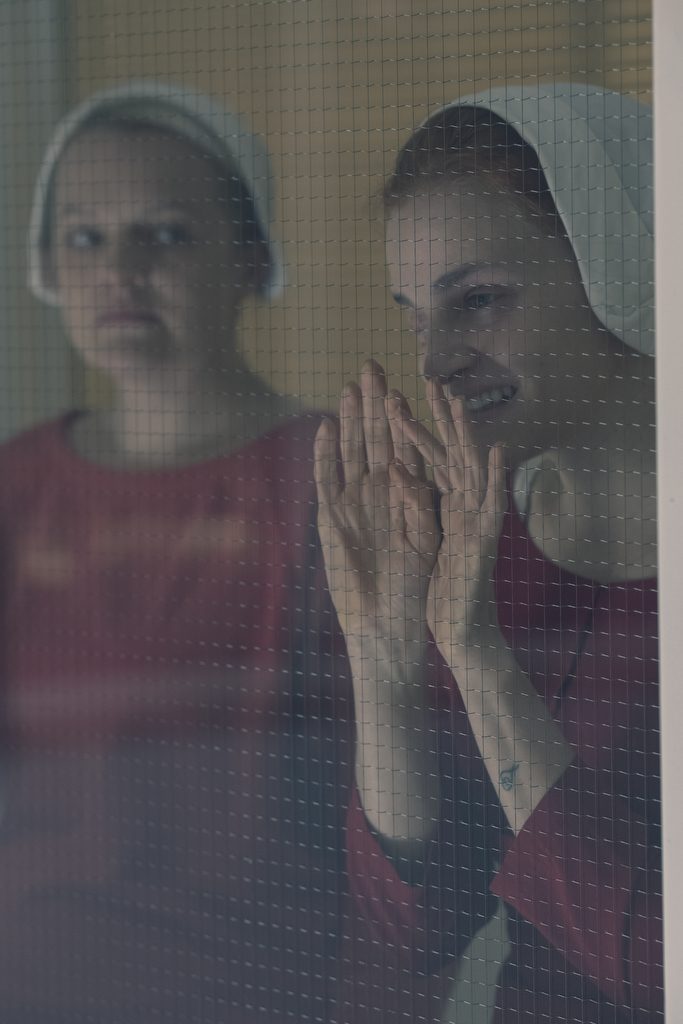 BT: From the “Lizzie cam” to Cam, your performance in Cam was so defiant and brilliant as well!

MB: I’m so glad that you watched Cam! That’s like my baby! My sweet child! I think that those characters and that resilience and that perseverance and that refusal to be beaten down, that is how I see women, truly. It’s like women are given shit hands a lot of the time, in a lot of ways. Throughout history, women have been the punching bags of volatile men, you know? So I think that these are well-written women. Janine and every woman on the show are incredibly well-written and fully, fully fleshed-out and multifaceted. And I mean Alice in Cam is…what a joy to play all of the dimensions of that character-all of the dimensions of a woman and a sexual being, but what a difference to go from this and the Lizzie cam to going to be on this movie in which…Oh my God, God bless Lizzie, who’s in every single frickin’ day, because I was in every single day on that film and I was [laughs] so tired, and Lizzie, she comes to work every day and shoots these long days and these intense scenes and it’s always with a smile on her face and every time I see her I give her a hug. I don’t know how she does it, but that is one boss bitch right there.

BT: How was your trip to the United Nations yesterday? We heard it was quite moving.

MB: Amanda (Brugel) and I could not stop talking about the United Nations. I think It was truly the most important trip that I have taken. To hear some of these people speak about where they have been and the work that they’ve done on the ground in war zones and poverty-stricken countries, and with people who have had their entire livelihoods, their homes and even their children ripped from them. Their lives as they knew them have been taken from out of their hands, and to hear the stories of these people—the people to whom it has actually happened—to now be able to bring that back into my character and into my storytelling is such a gift. We’re so lucky that they were willing to speak with us and to educate us and to give us that opportunity, because also being there in the General Assembly, are you kidding?! It was so magnificent, it was the opportunity of a lifetime because I know that you can take tours of it, but we really got a wonderful view of it.

BT: Handmaid’s is going in some very powerful directions in season three. What would you like viewers to look out for this season?

MB: This season is about resistance. It’s about resisting the powers that be and finding these nuggets of resistance, and everybody does it in their own way, everybody helps in their own way – some people are on the ground and some deliver messages – and I guess there are so many ways to do it. I want people to take away from that, that resistance does not need to be one way and in the same way that advocacy and activism does not look one way. That’s something that I want people to take away from it, but also that there is light at the end and I know that it’s been bleak and it’s been dark and it’s been tough and I thank every viewer for coming into the trenches with us and that we are on our way out.

BT: You’ve spoken out about your love of Fleabag and When They See Us. How much do you think that content shapes the landscape?

MB: Oh my gosh, that’s a loaded question, I love it! I mean I’m obviously a fan of television and filmmaking and movies and the whole medium of art in general, theatre, all of it. I think that the duty of art making in this medium is to hold a mirror up to society. Hold the mirror up to nature, as Shakespeare writes in Hamlet, and show people their lives and show them their truths—the good and the bad—and I think that is something that we honestly do particularly well on The Handmaid’s Tale. We allow people to see themselves in these characters and in a lot of different ways, but also to see the truth of society as it is right now and to say that this is where you could end up, if you don’t stay awake and you don’t pay attention. I mean I watch The Office and Bob’s Burgers every single night. I love escapist television as much as anybody else. [laughs] But I also think that it’s important to watch the difficult television. When They See Us, I can’t even talk about it without tearing up, it gives me a knot in my stomach. But that is one of the most important series that I have ever seen because it brings these stories and that’s what I love about television, especially now, is that it brings these important stories into your home and into your lives.

BT: What are some of your goals in terms of your own personal arc?

MB: I’ve been very lucky to have been working for the last six or seven years, and to be working with people on stories that I respect and stories in which I believe and on characters that have helped me grow and helped me learn and helped me relate to the world in a better way. So moving forward, I’ve always said that I want to do the best shit. I want to do it, I want to work on it, I want to be a part of it, I want to grow and learn and be challenged. And right now, I’m on my favourite show on TV, [laughs] so I feel very, very lucky. Moving forward, I want to play more characters that have something to say and now that I’ve played characters like these brilliant women, these strong, powerful and flawed women, I don’t have to go back. I’m going to move forward and continue to play strong and determined characters.

New episodes of The Handmaid’s Tale season three are available every Wednesday on Hulu. Season three of the show premieres this Sunday night at 9pm ET on Bravo in Canada.